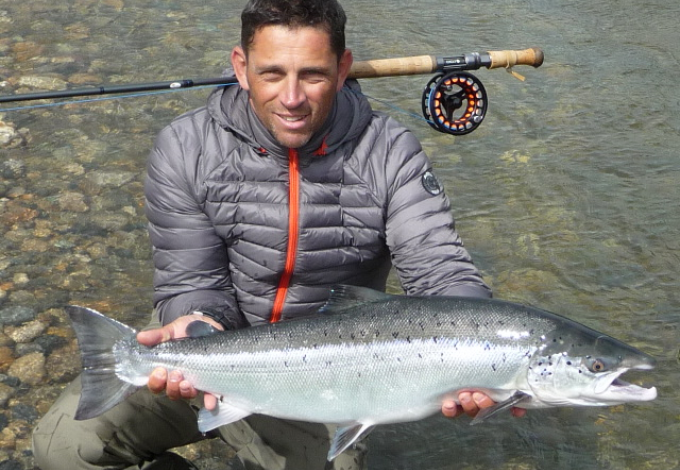 The Gaula, as well as many other Norwegian rivers, have had a great start to the salmon season 2016 so far. Our fishermen have experienced a great season start, with a lot of nice fish landed at NFC since our last update.

The opening day ended with Laurent’s big fish on Beat E1 and on the next day Manfred Raguse managed to catch his first salmon of the season 2016 down on Beat E1 – a nice and fat fish of 90cm, weighing approximately 8kg. 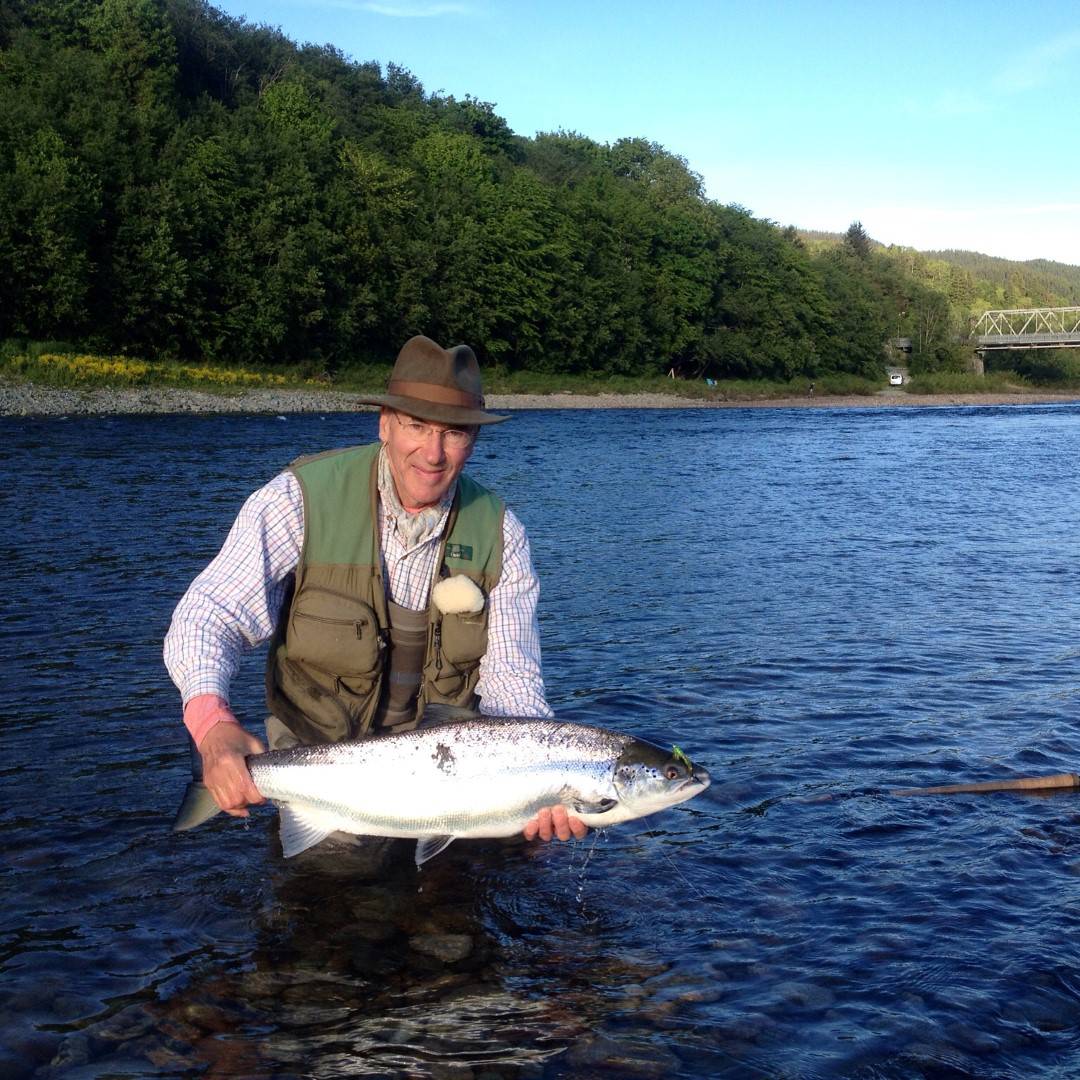 Manfred with his first salmon for the 2016 season – congratulations!

Also, Thies Reimers caught his first fish of the season on Beat E1, estimated to weigh roughly 8kg as well. Thies fished alone and was able to release the fish. We have also heard of a lot of fish which have passed the Gaulfossen in the past few days, and we the rumors were confirmed, again by Thies, who managed to catch the first fish above Gaulfossen on our Beats for season 2016. This time it was quite high up river on Beat BS2! 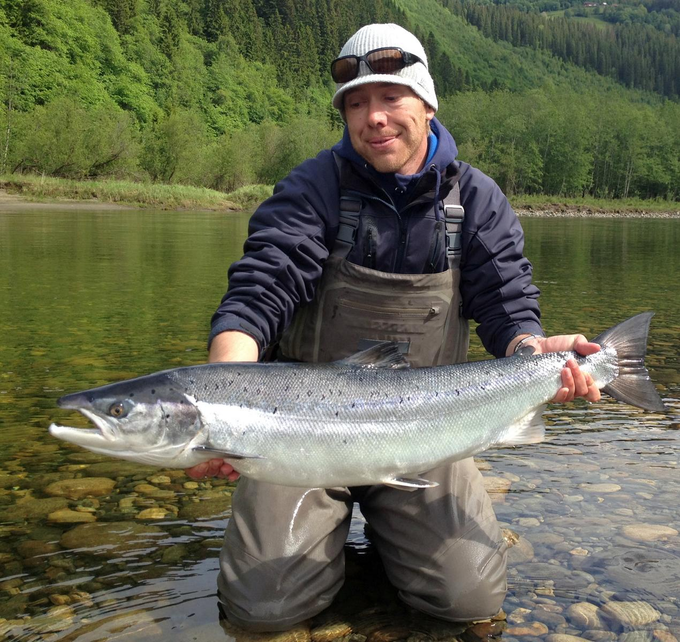 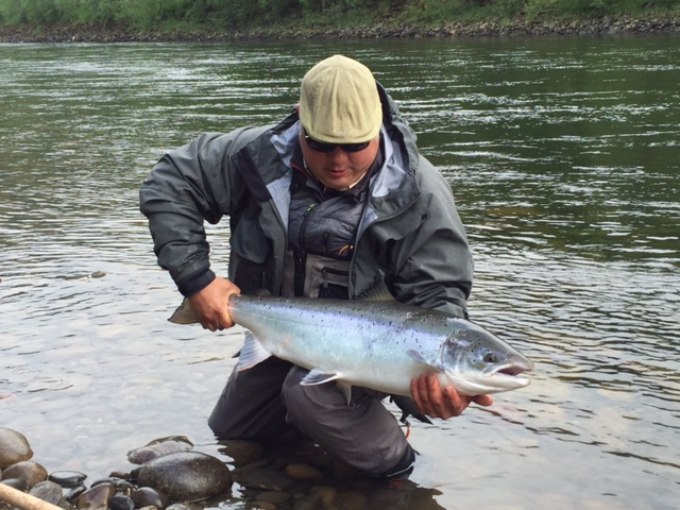 In the meantime there have also been some nice fish caught again by Laurent and Fabrizio on Beat E1 – both fish weighed roughly 7kg.

Laurent Galliot with his 3rd fish during his week! 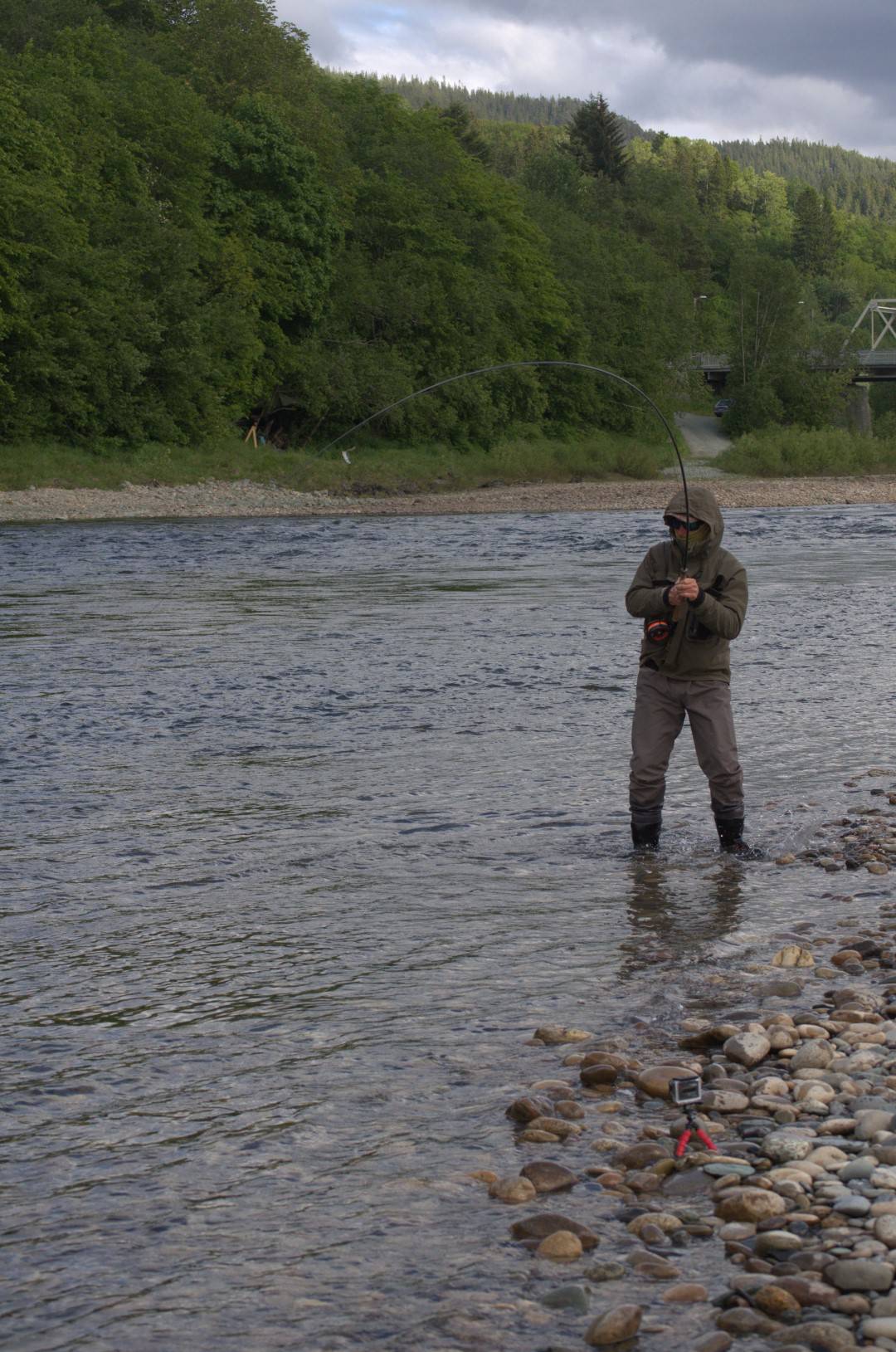 Fabrizio is into a fish on Beat E1a 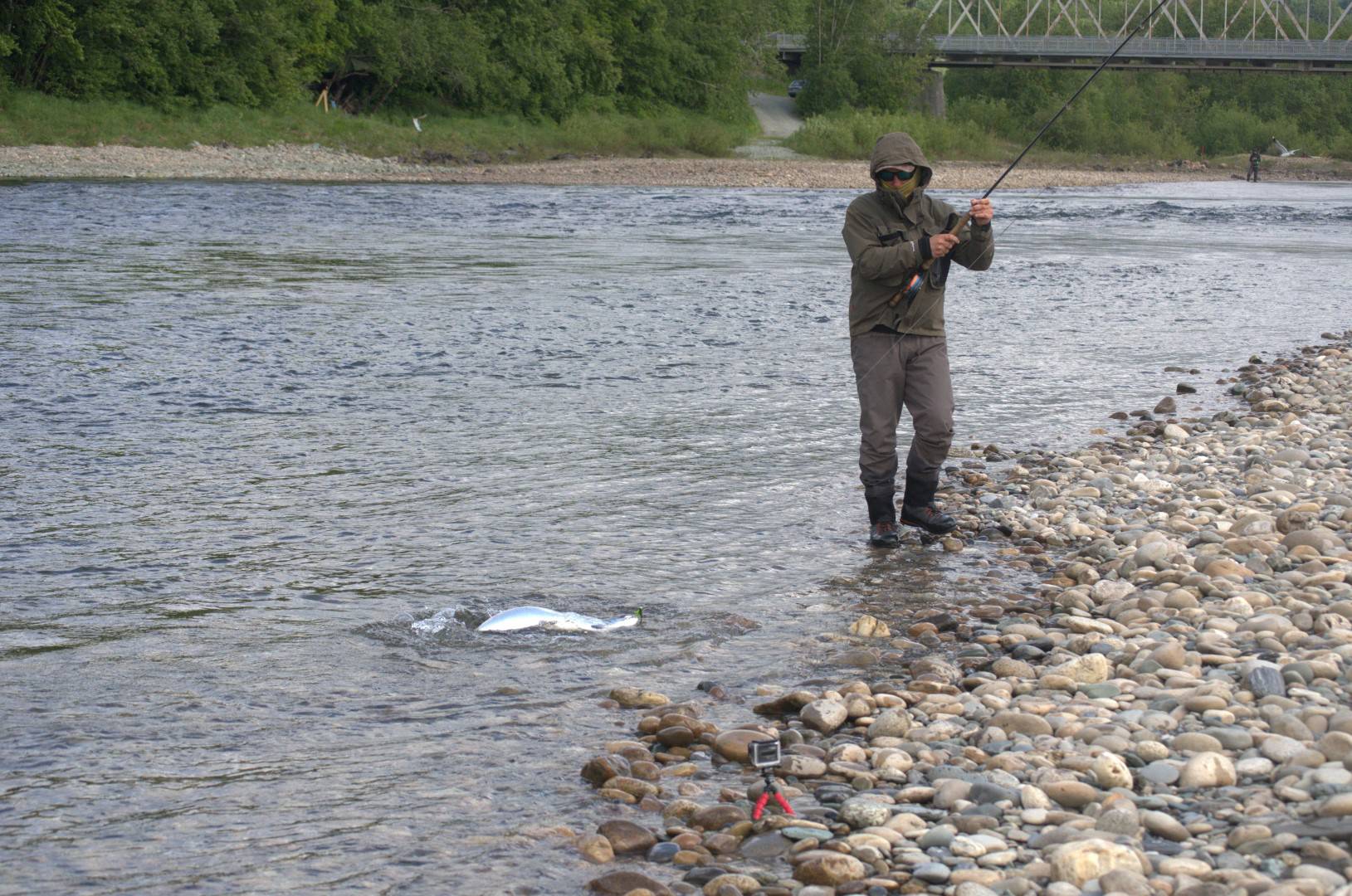 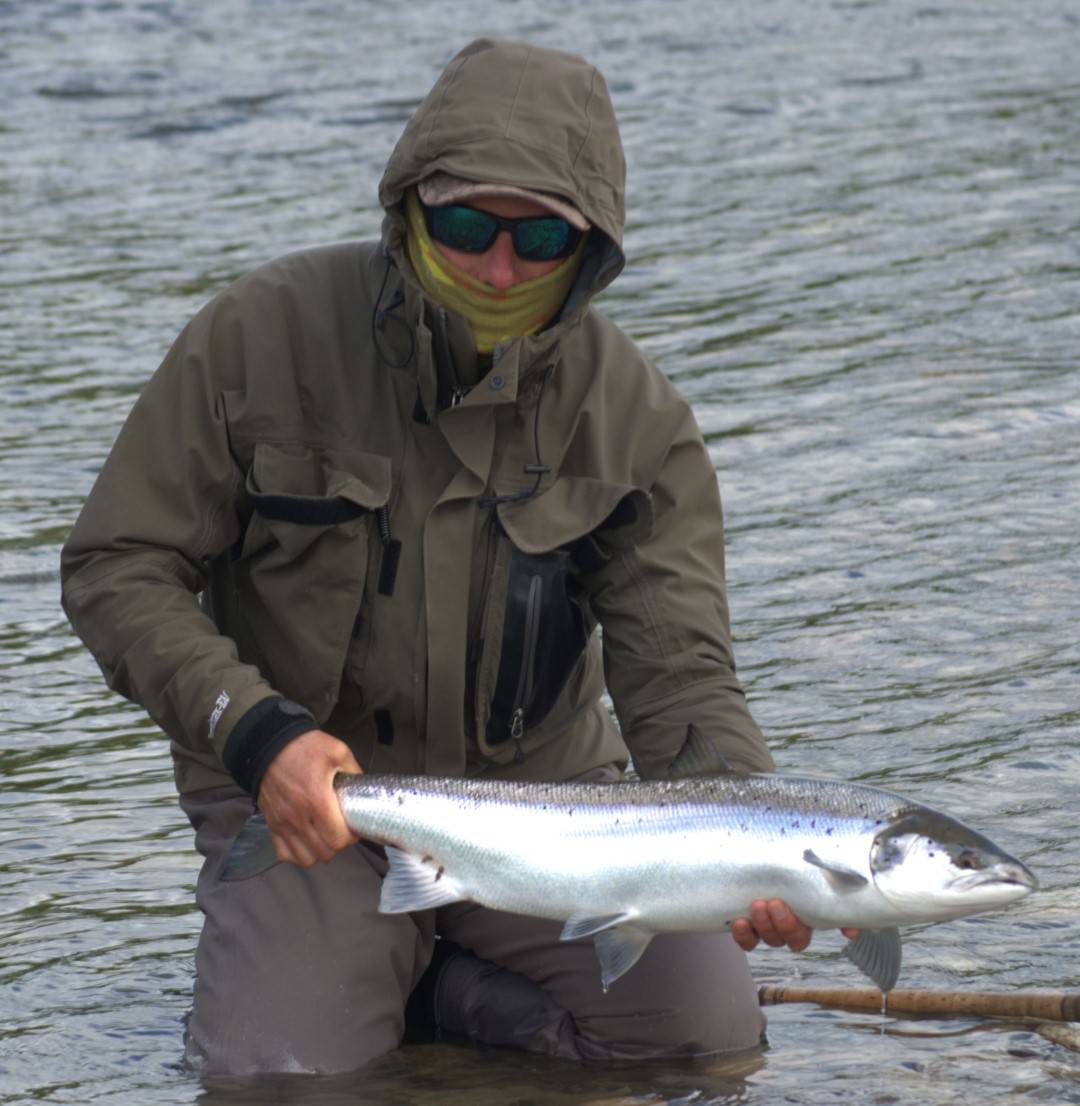 A nice fresh fish – the E-Beats are delivering fresh silver these days!

During the evening Fabrizio fished Beat BS2 and hooked another fish, an even bigger one! After a good fight he managed to land his 2nd fish of the day – 105cm, and about 12kg! What a nice fish! 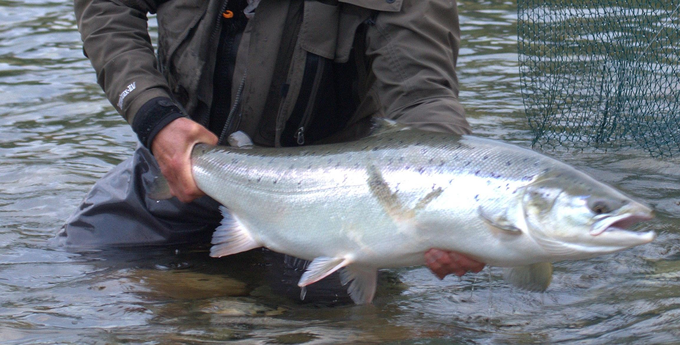 The fish now seem to be coming in small groups and if you have your fly in the water at the right moment you are able to catch a fish or more in a short period. Like our French team managed the following day. They landed 3 fish within 1 hour on Beat E1a! Laurent landed is 4th fish for the week, this time “only” a modest fish of about 6kg. Cyrille Borro landed a really nice fish of 10kg, and also Yan Russon caught his next fish, this one measured 90cm. 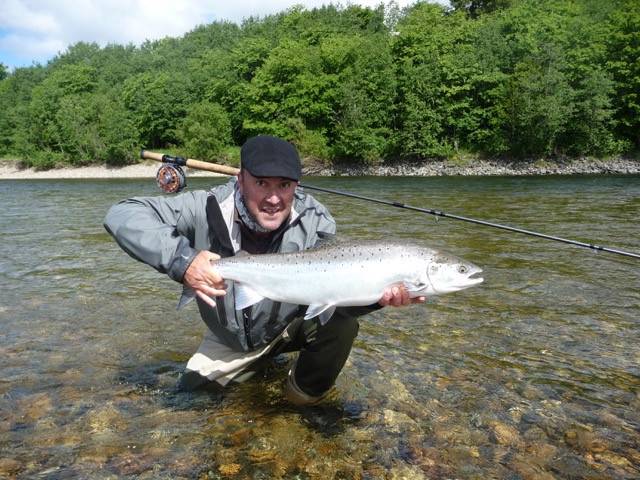 Yan and his fresh fish from that crazy June-session on Beat E1a.

Also, our Italian guest Stefano Maspoli who came just for 3 days for the first time to the Gaula managed to land his fish. He caught a nice fish on Beat BS1 of 87cm.

Stefano and his fish from Beat BS1.

On the way to the airport, Laurent and Cyrille stopped at Beat E1a again, just to have a few last casts. Cyrille lost another big fish and Laurent caught his 5th fish! What a week for him! His last fish weighed about 8kg. 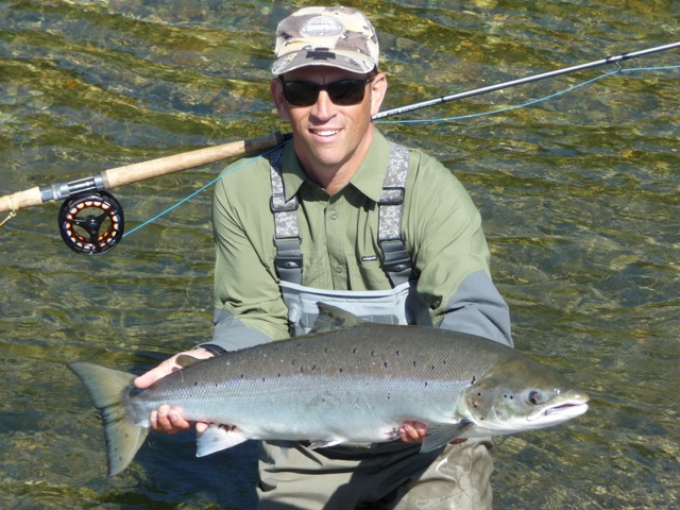 Laurent with his “Welcome back next time” salmon from Beat E1a!

The water is now constantly dropping due to the dry weather we are experiencing these weeks. Also, much of the snow has already melted, which means we actually have a “summer water level” in early June. It looks a bit strange for this time of the year, but on the other hand, it is quite fun to fish with lighter lines and lighter tackle for these big fish which are around this time of the season!  It is also very exciting that we see fish moving everywhere, not very common at this early stage of the season – it feels like July fishing!

The weather forecast is still not very “typical” for the Gaula and Norway in June, but anyway, the water level seems to be steady for a while as things look right now, at a great fishing level. All pools are fishing quite well right now, which means you can catch them almost anywhere you cast a fly into the water! The new week has already started with a couple of good fish and we foresee some very good days to come – this week’s fishermen timed it well! We will continue to keep you informed! And for anyone interested in cashing in on what appears to be a great run of fish so far this season, feel free to contact us, as we have very few rods left in various weeks.