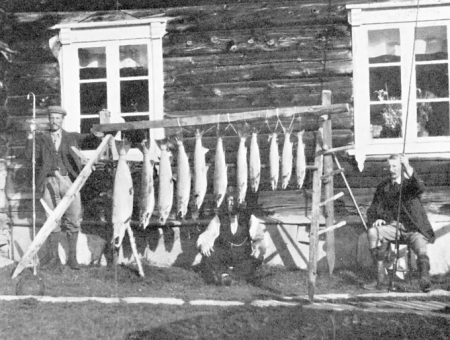 As early as 1440, there were written reports about salmon fishing in the Gaula. The salmon fishing rights were used for validation of properties. Custom papers dating back to 1571 show that there has long been a lively export of smoked and salted salmon from Trondheim to Denmark and Holland. A lot of different equipment like nets, spears and the like was used during those days to catch salmon.

Fishing with rod and line is known to have been in use a long way back in time but did not really become important before 1825 when the first English fishers with greenheart fly rods, silk lines and salmon flies laid the foundations for sport fishing for salmon on the Gaula. Some travelled by boat to Kristiania (now Oslo) and were using coach and horses to get up to Støren and the Støren Hotell, the center of the Gaula valley, crossing the Dovre Mountains on their way. Most of them came by boat to Trondheim and from there they had only a short journey to the valley of the Gaula. After the railway from Oslo to Trondheim was built in 1864, and the railway line from Trondheim to Röros was established in 1877, it was easier to access different parts of the Gaula valley. In 1835, Mr. Andrews and other English fishers stayed and fished around Støren. At a farm up stream of Støren an English House was built on the riverbank in 1837, after English fishers had been fishing there for some years. The lease on this water, which includes the original and now fully-renovated English House, is held today by the Norwegian Flyfishers Club (NFC) and is a cozy place for small parties to stay. The NFC has many other leases of beautiful fly water along the course of the Gaula, which has been known from historic times and is fished nowadays by some of the most passionate English flyfishers.

After the early flyfishers like Mr. Rogers and Mr. Hunt experienced such fantastic fishing on the Gaula, catching 266 salmon within 26 days in 1848, more and more flyfishers began to appear. Year after year many wealthy Brits came with a lot of relatives, friends and servants. One of them was John Gordon who virtually came every summer, from 1860 until he died in 1899. He fished the Bogen water and lived his first years out on the Bogen Farm. On several other farms various English tenants lived during the summer, hiring the services of the farmers for guiding, transport, cooking etc., and brought a considerable amount of income to the riparian owners. The pilgrimage of English flyfishers to the Gaula – “perhaps the best Salmon river in Norway” continued until World War I. In the well-known book, the Jones Guide to Norway, edited by Frederic Tolfrey and published in 1848, the Gaula is described as follows: “It is not only renowned in Norway, but its fame has spread far and wide, and it is held by all who have visited it, to be one of the noblest streams in which the Salmon-fisher ever wetted a line. Wondrous has been the sport met with by our Countrymen; and, to this day, the Guul (Gaula) is remembered by them with feelings that none but a real lover of the Art can enter into or appreciate”. The same book reports about a Mr. Hornden who landed a thirty-pounder after he had to follow it swimming over to the other bank: “This is a fact worthy of being recorded, and adds, if possible, to the celebrity Mr. Hornden has gained for himself as a first-class salmon fisher. This gentleman has been known to kill three hundred weight of fish on the Guul (Gaula) in two days.” Jones Guide to Norway closes with the words: “May we meet on the banks of the Guul (Gaula), the Namsen or the Alten (Alta)… and drink success to salmon-fishing in general, and to the Jones Guide to Norway in particular.”