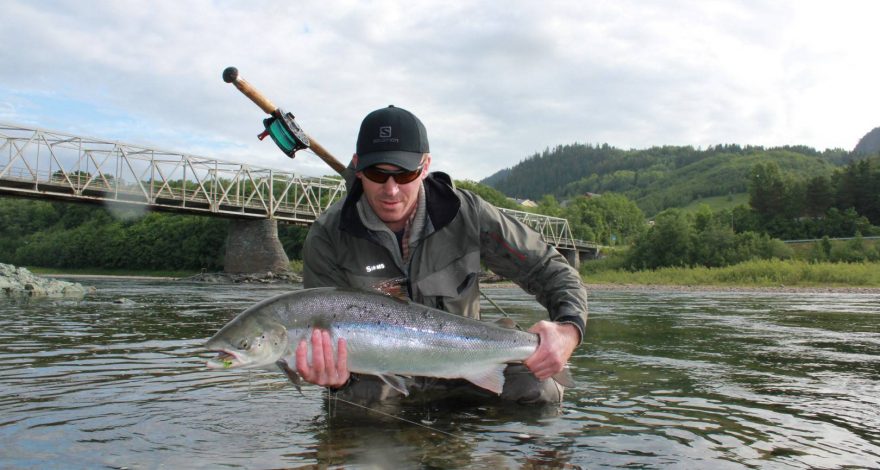 Week 25 started as good as week 24 ended- the great fishing continued. Manfred Raguse caught the first fish of week. Manfred was able to catch and release a big fish of about 12,5kg on Beat C2. He had already landed two fish earlier in the day, one salmon of about 7kg on Beat BS1 and another of about 5kg on Beat G1.

Also Johann Bstieler kept on catching in his 2nd week of fishing with us! He caught two more fish on Beat B1 weighing about 4kg and and another big fish of about 11kg. Regular guest Thomas Mahnke started his week with a nice fish on beat E1a. 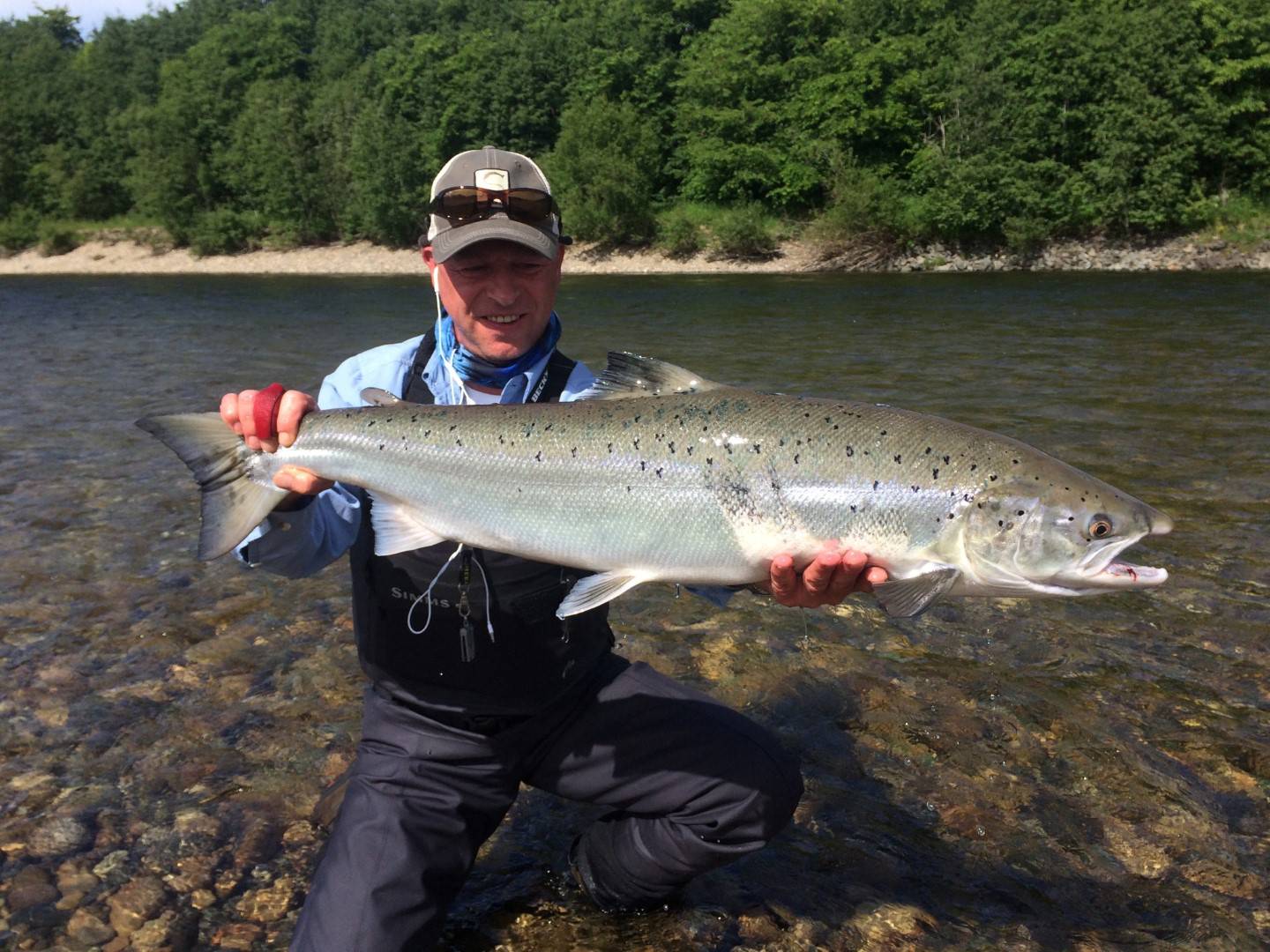 Thomas with his first fish of the week – approx. 9kg from Beat E1a.

Also Tore Ueland had a good start and caught a salmon of about 7,5kg on Beat E2. 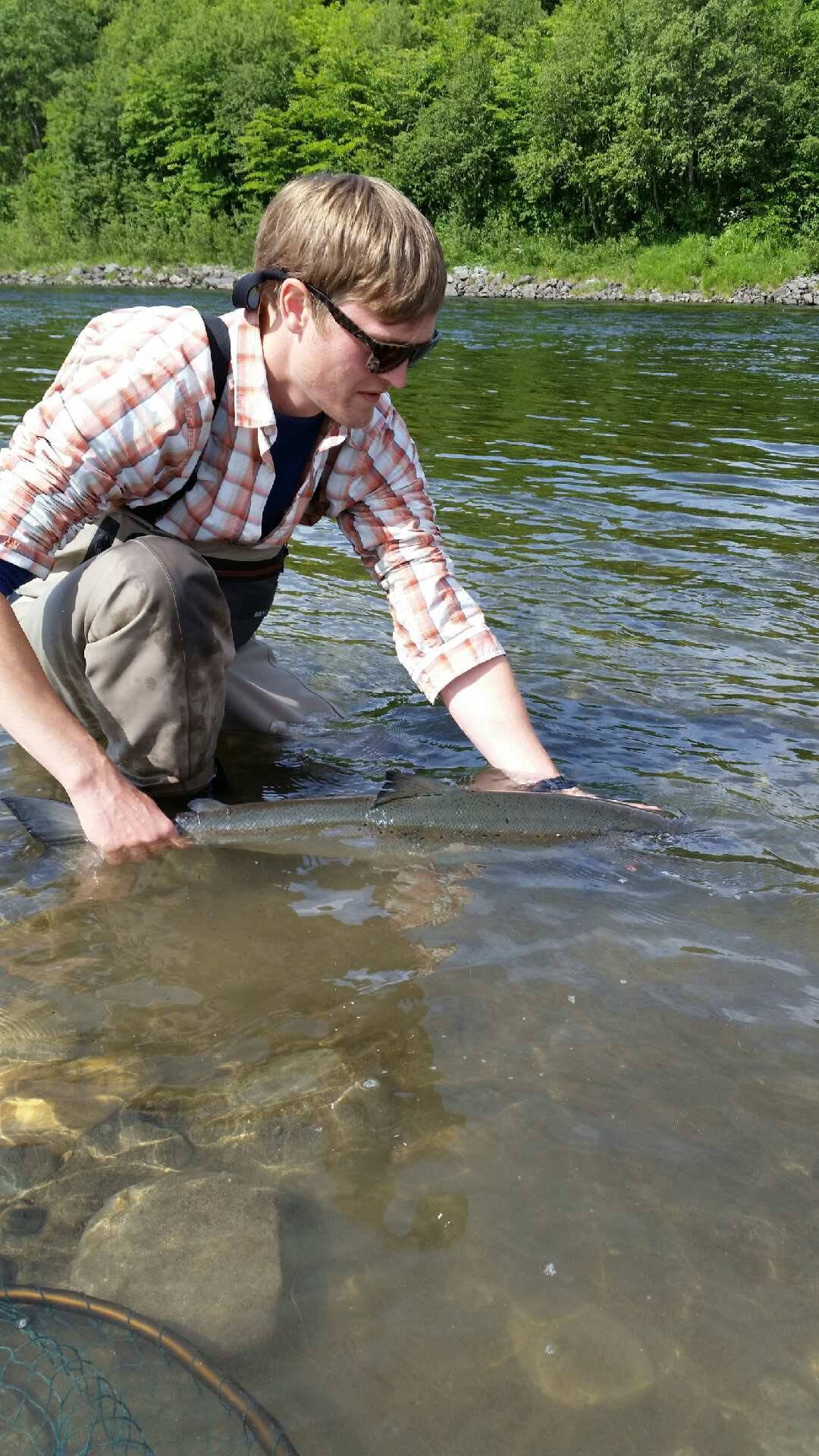 During this week we had the well known casting instructor Simon Gawesworth, and brand manager of Rio Fly Lines, fishing with us. It did not take him too long time until he managed to catch his first Gaula salmon and is was a good fish of about 10kg! Simon landed his salmon on Beat C2. 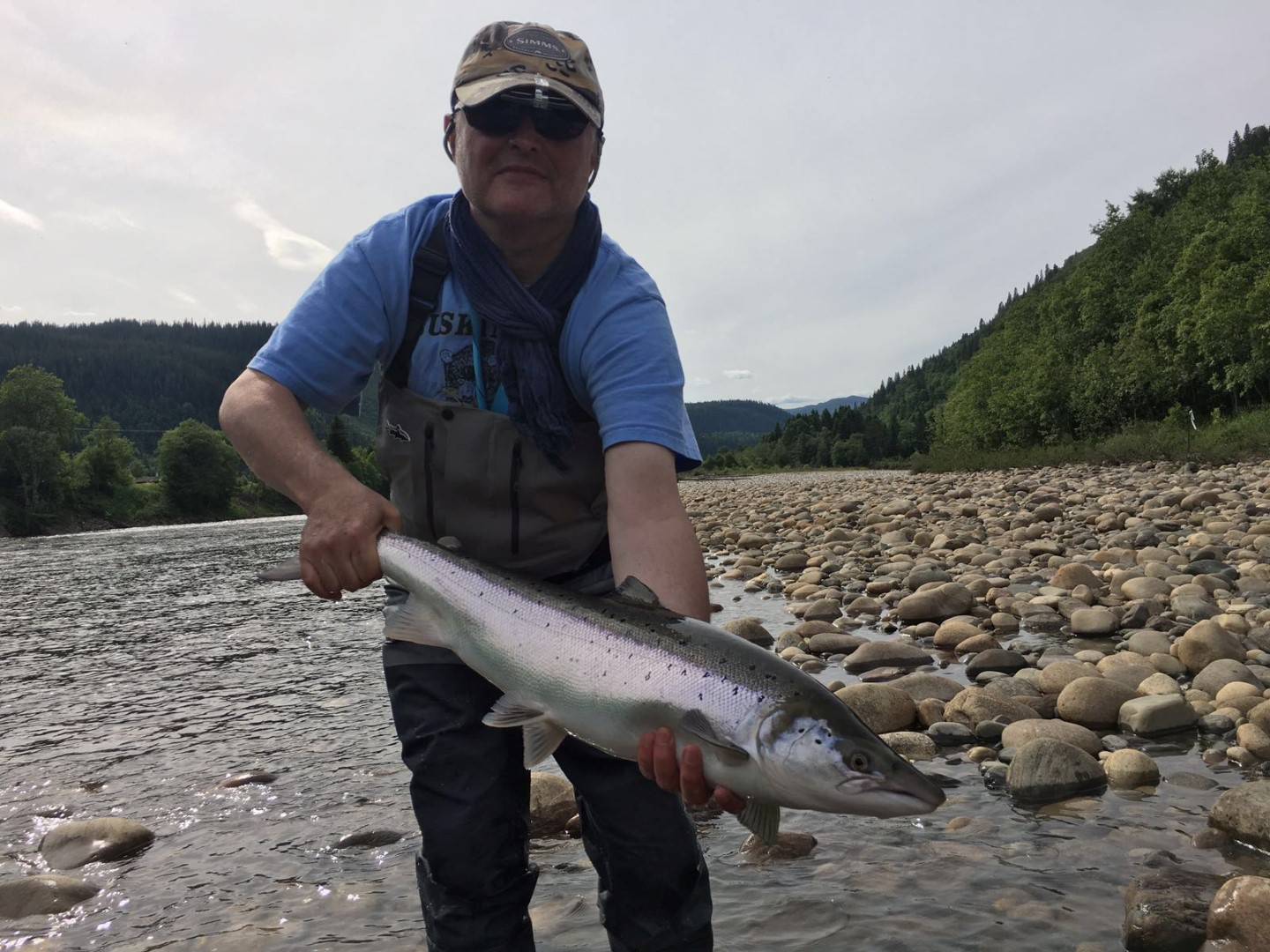 Thomas Mechler with 2nd salmon – about 5kg, caught on our new Beat G1.

Also, long-time guest Fabien Laborde, came back this year to fish with us and landed two good fish of about 6 and 9kg on Beat B1. The next day it was again Tore Ueland who managed to land his next salmon on the lower river, a beautiful fish from Beat E1. 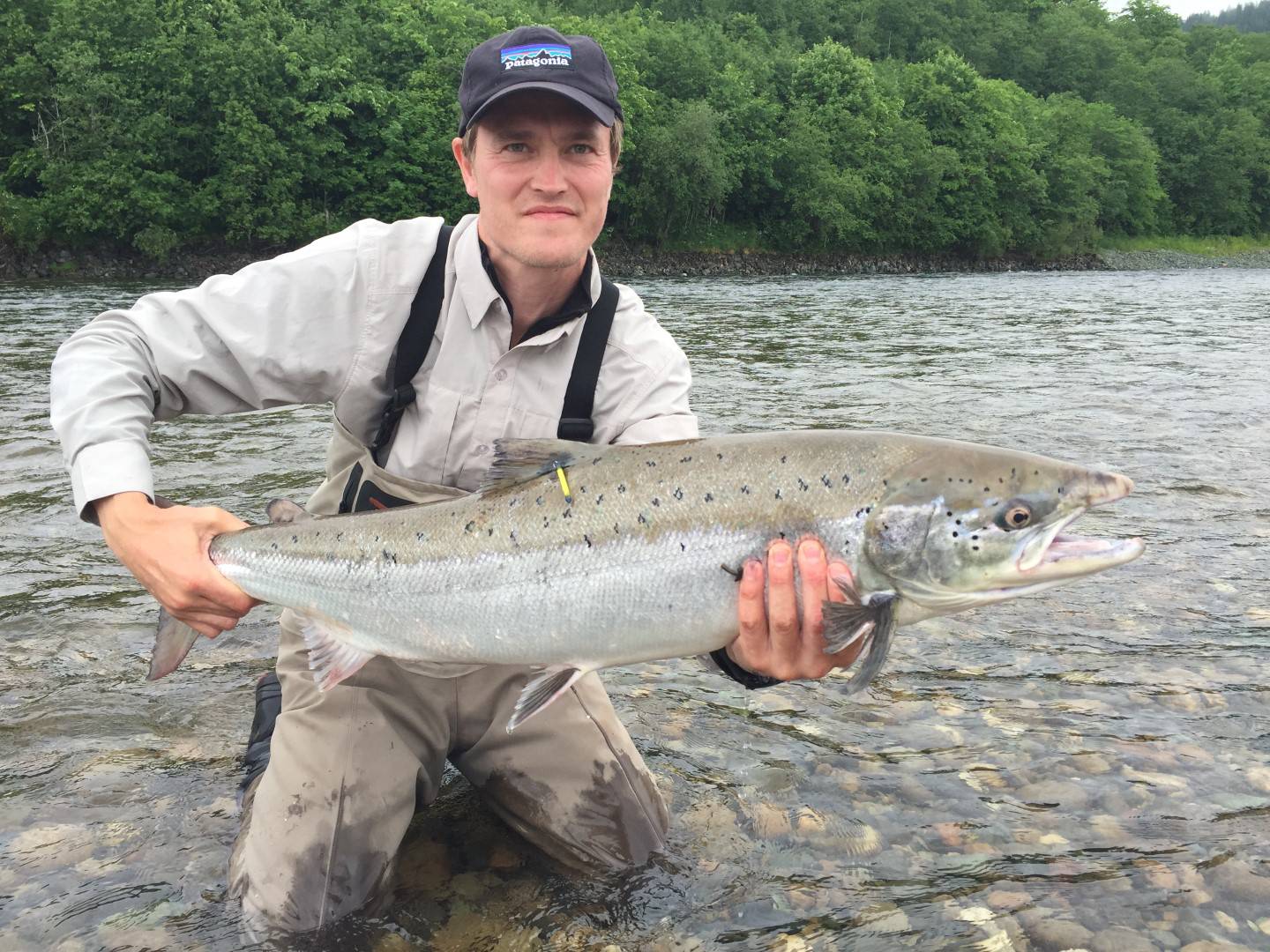 Tore with a fresh fish from Beat E1.

Also Thomas Mechler caught his next salmon, this time on Beat B1, an even bigger salmon than the ones from the day before, aprrox. 9kg. Steve Radley from the UK fished our Beat E7 and landed a great fish of approx. 9kg. Fredrik Lorentzen caught his first Gaula salmon on Beat BS1 weighing about 7kg.

Daniel Stephan fished Beat G1 on the next morning and was able to catch and release a well conditioned fish of about 8,5kg. 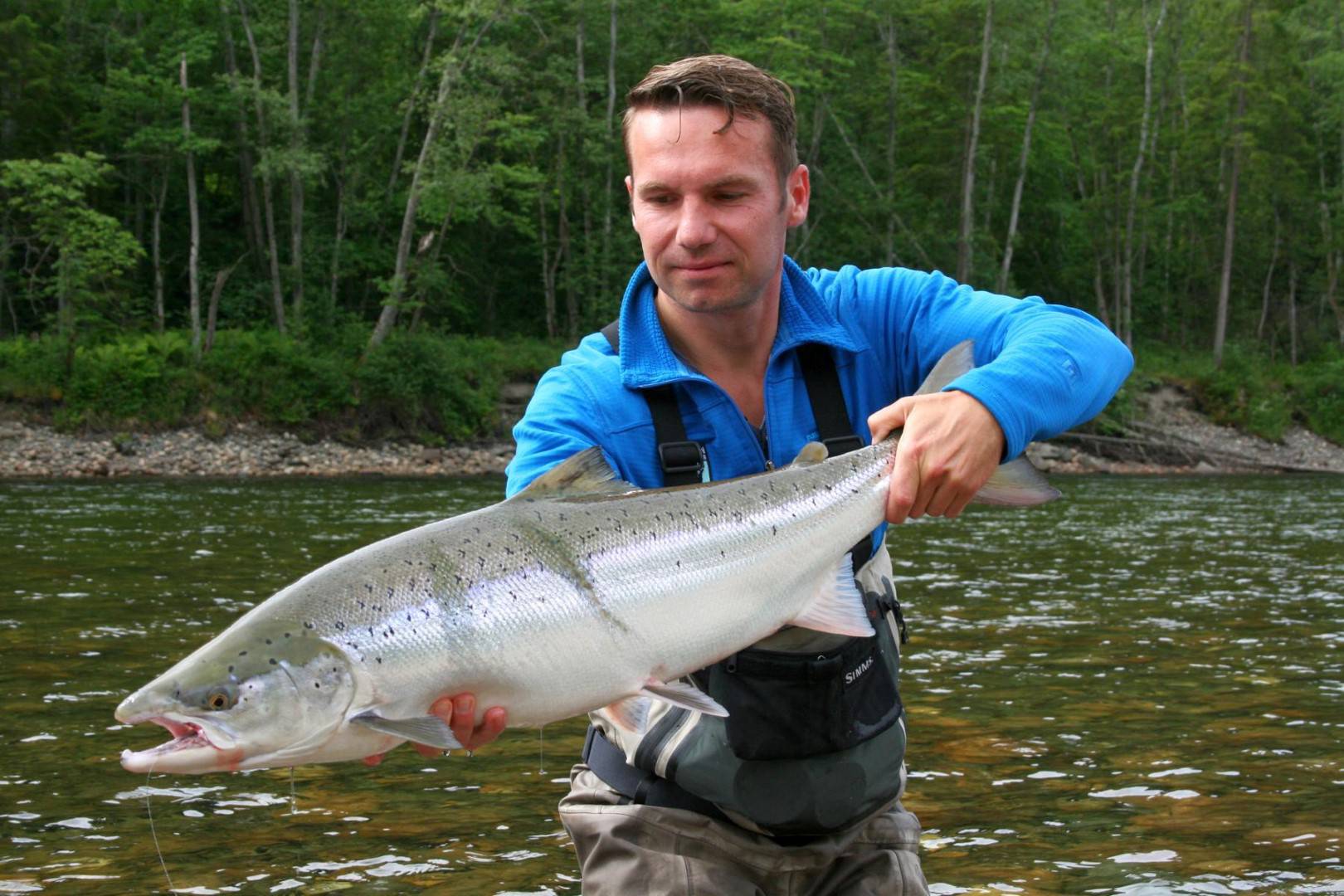 Daniel with a fat fish from Beat G1.

A little later Fabien Laborde fished the same beat and caught his next salmon, this time about 7,5kg. Johann Bstieler reported two more fish from the lower river – 5 and 6,5kg from Beat E1a.

Kenneth Gundersen had his best Gaula day ever and managed to land 4 good fish! He started off with a nice fish of about 6,5kg on Beat B1. Then he kept on fishing, and catching-two more fish on Beat E7 from the high bank about 7,5 and 9kg and finished the day with another fish of about 5kg on Beat E1a. 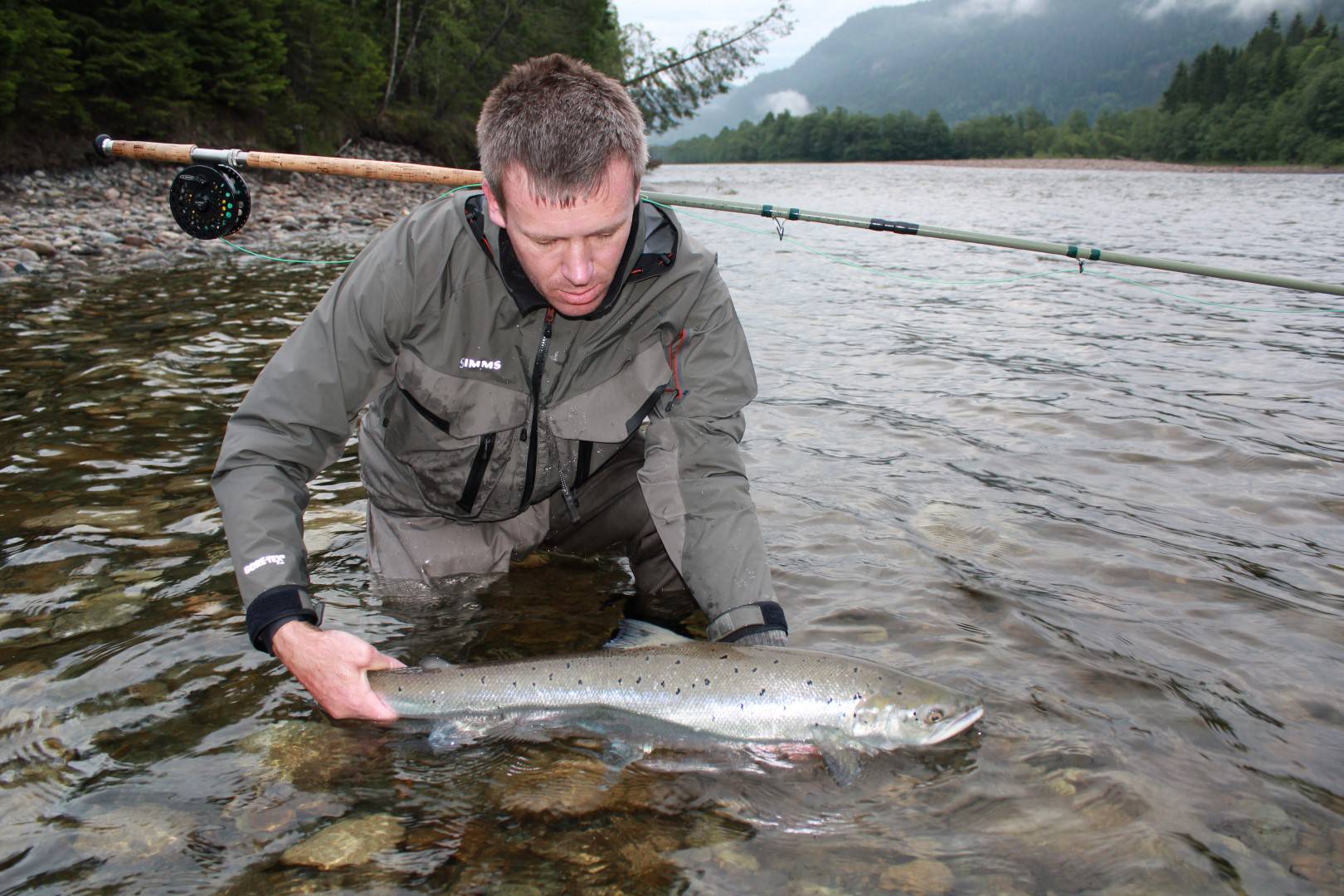 Kenneth with his salmon from Beat B1. 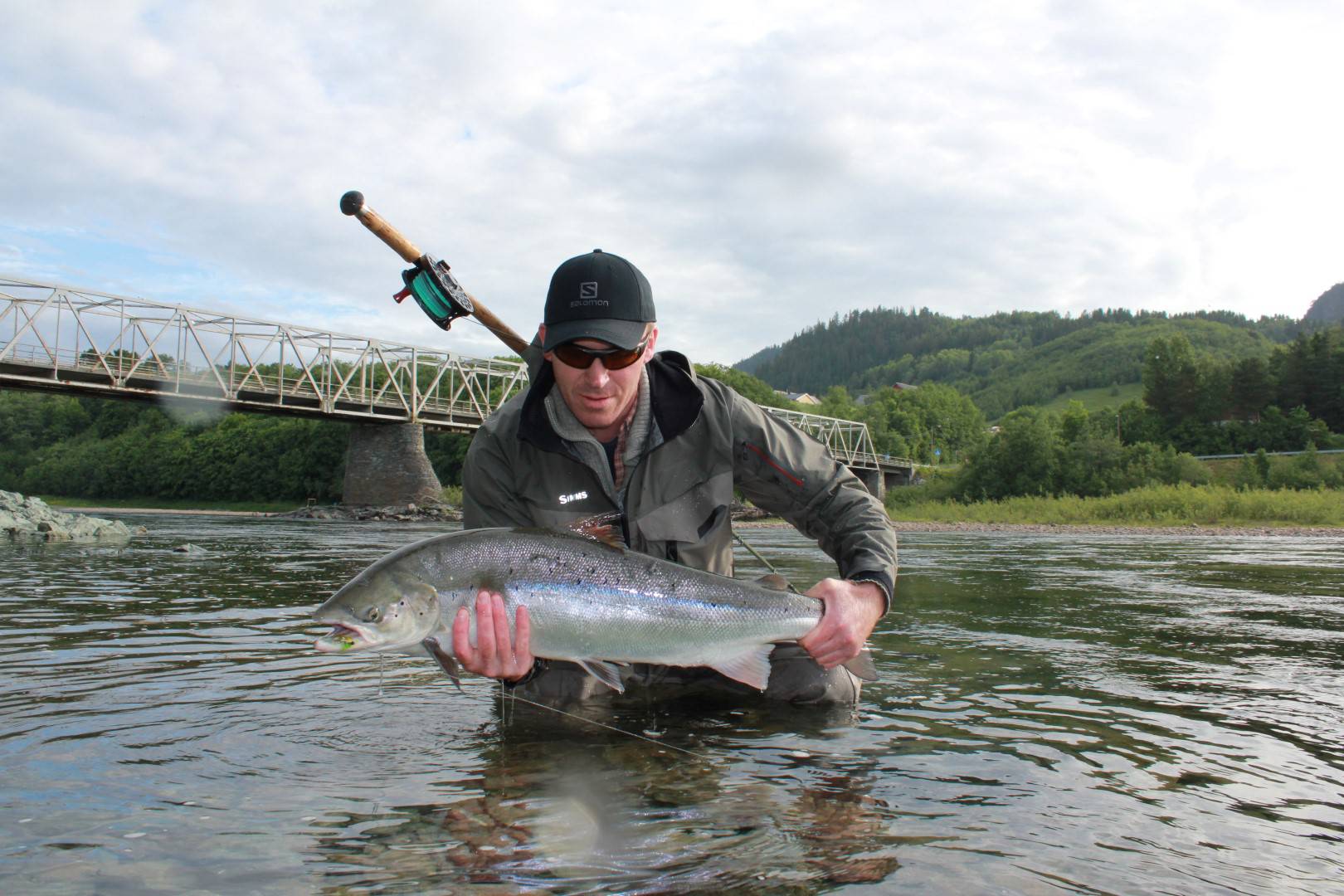 One of the salmon from Beat E7.

Also Jostein Ueland was able to catch a good fish of about 10kg in Beat B1. 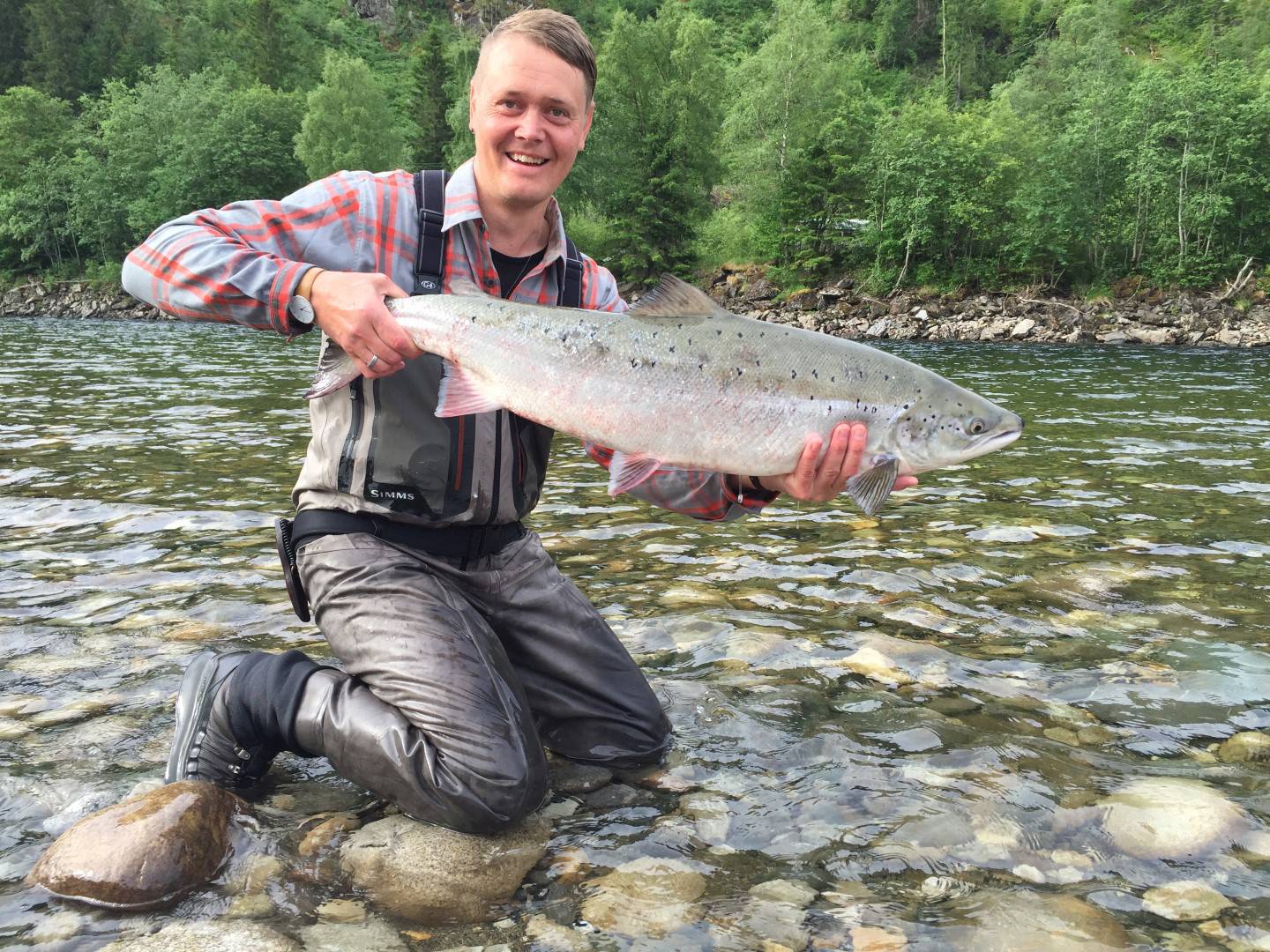 Jostein with his nice salmon from Beat B1.

His brother Tore had a good session on Beat E7 and landed two more salmon of about 6,5 and 7,5kg. Also Per Arneberg had a great fish on Beat E1 on the same day! After an intense fight Per managed to catch and release a nice fish of 98 cm, probably weighing about 9 or 9,5kg. A super strong fish, covered with lice- meaning it was coming upstream directly from the sea! 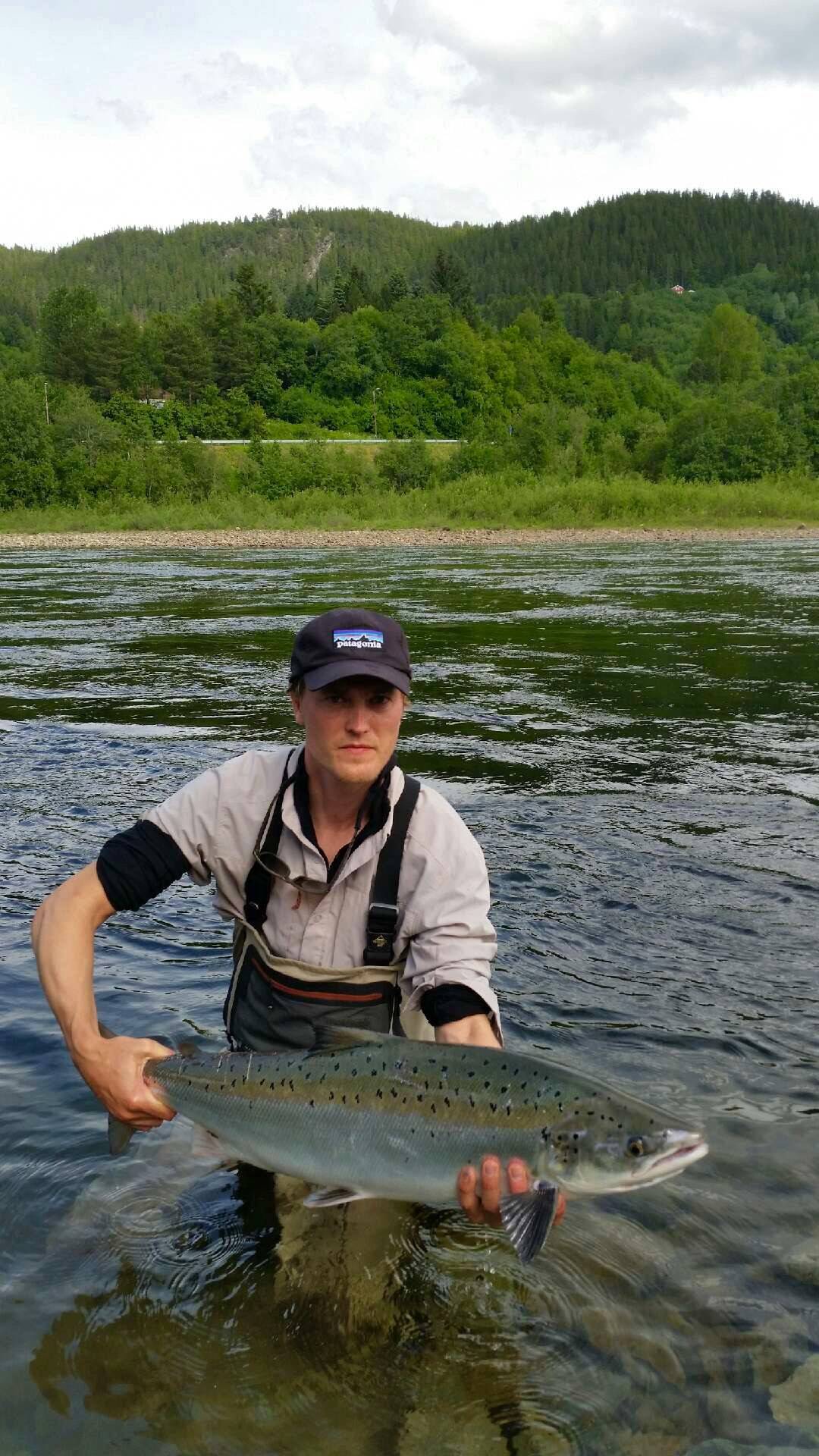 Tore Ueland with a nice fish from Beat E6.

During the night Tomas Mahnke fished Beat B1 and caught his next salmon, another good fish of about 9kg. While Johann Bstieler caught the first grilse of about 3kg it was again Simon Gawesworth who was able to catch and release another good fish on Beat BS1. 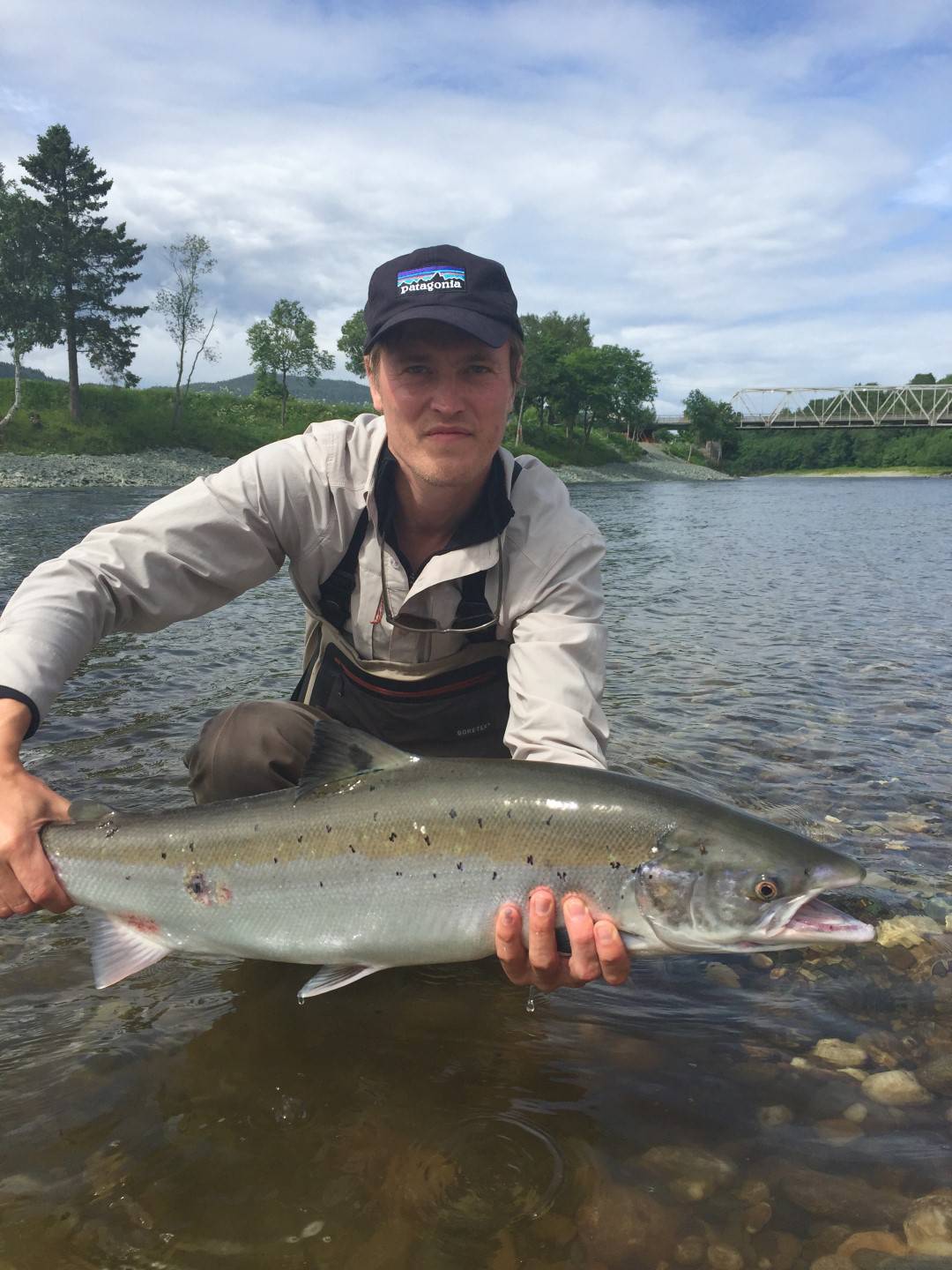 Tore Ueland with a good fish from Beat E7. 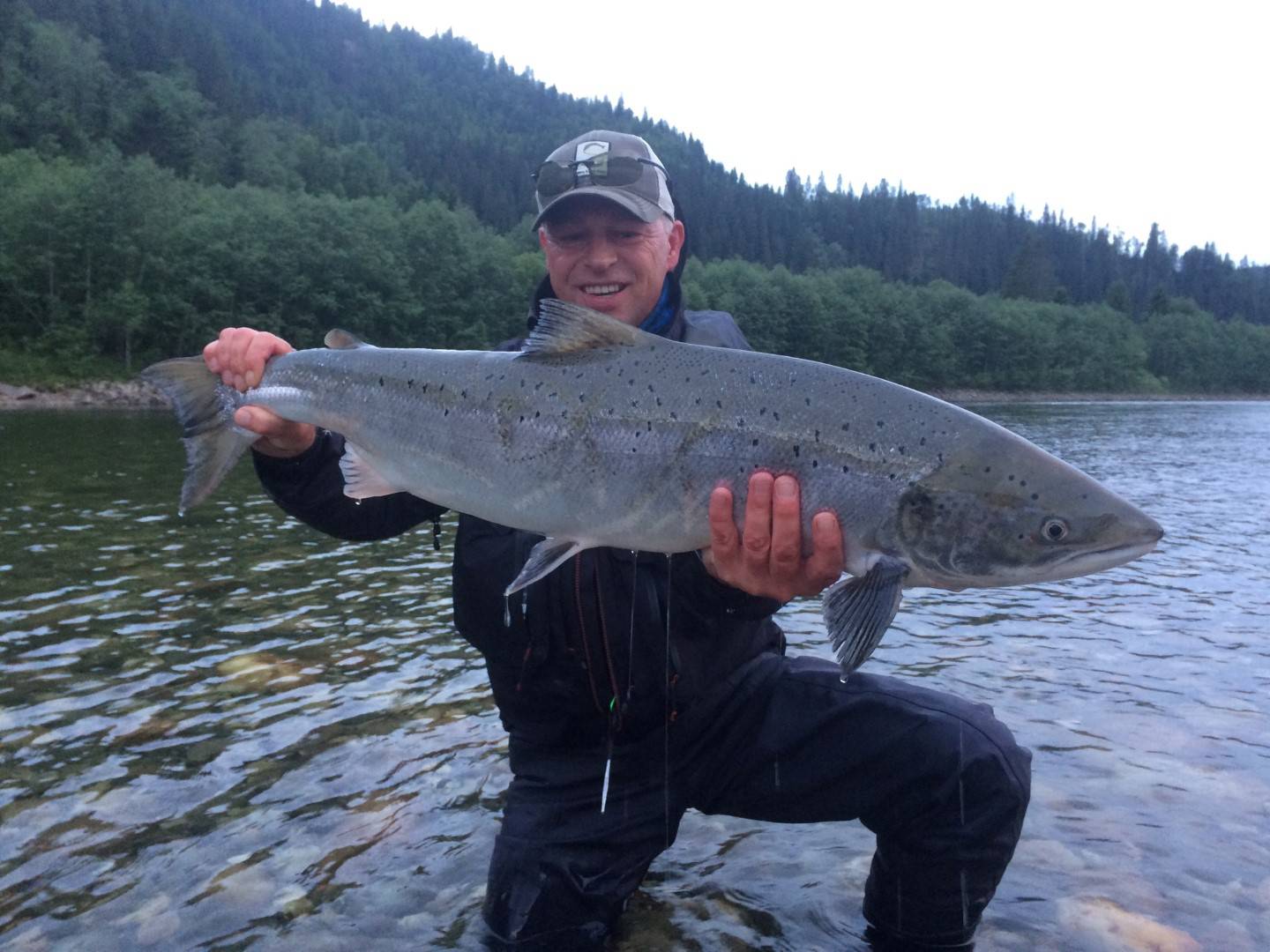 Thomas Mahnke and another great fish from Beat B1. 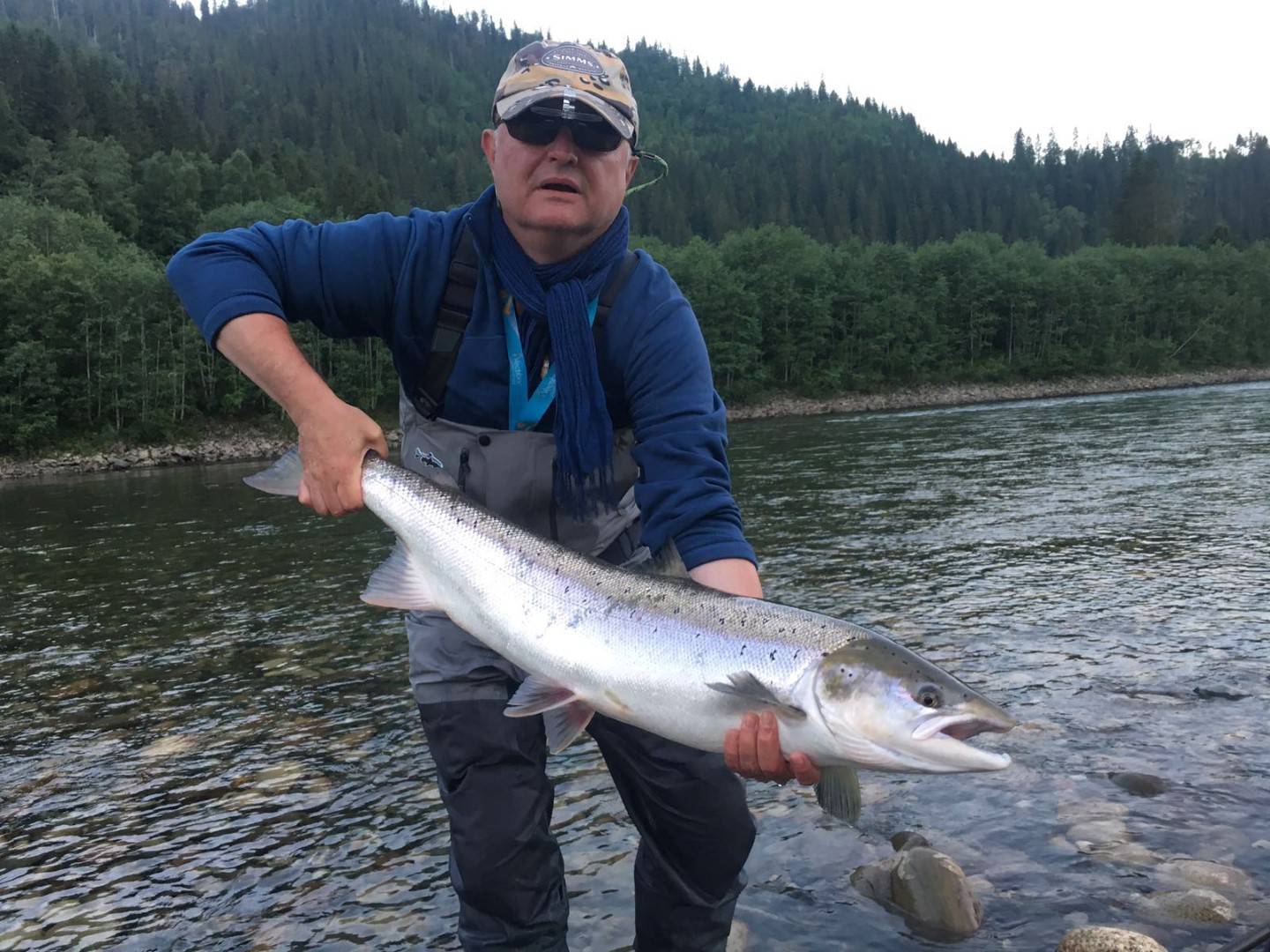 Thomas Mechler and his 4th fish of the week – congrats Thomas!

Thomas Mechler caught his 4th fish on his first trip to the Gaula – what a week to start salmnon fishing!

Also regular guest Bruce Bomphrey caught a couple of nice fish during the last days. He caught fish of 4,5kg on Beat G1 and another two on Beat E1a weighing both about 5,5kg.

Also Kenneth Gundersen landed one more salmon on Beat E7, measuring 90cm (7kg) and Stephen Harris got another fish on the same Beat of about 80cm (5kg).

Daniel Stephan landed two more fish during the week of 7 and 7,5kg on Beats C1 and D2. As well as Thies Reimers, who had a nice fish of 9,5kg on Beat D2.

With one last try, heading to the airport, Stephen Harris caught another fish of 5,5kg on Beat E1a! The two last fish of the week were caught by Thomas Mahnke on Beat BS1, approx. 9kg and Mawill Lüdenbach on Beat D2 weighing about 8kg. 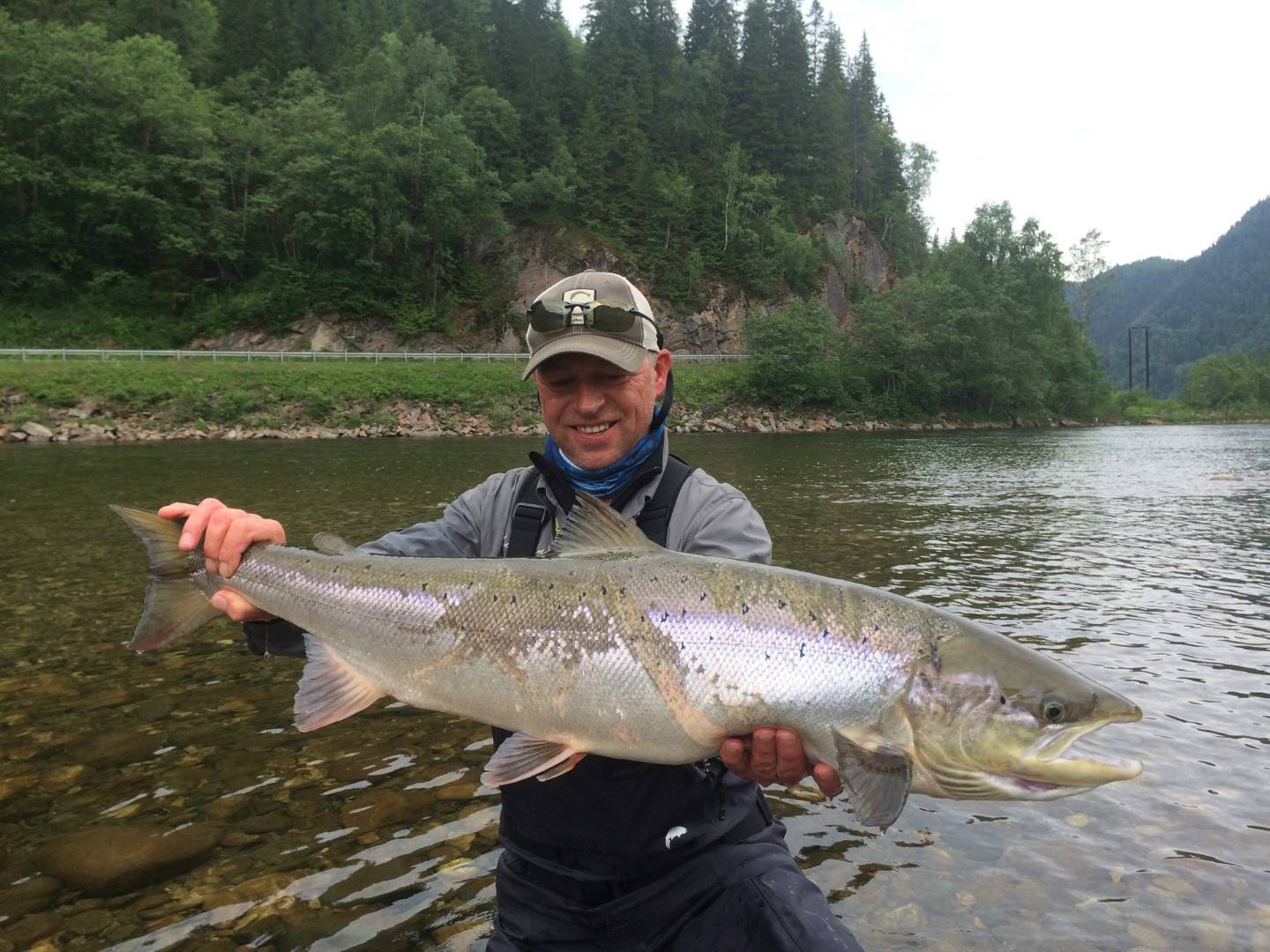 Thomas Mahnke with a nice fish from BS1.

Even though the fishing seemed to slow down a little bit towards the end of the week  – over all it was another great week on the Gaula! Its just great to see the Gaula in good shape again.

Already from last night we got report of 4 newly landed fish – of approximately 13, 5 and 8kg from Mortan Carlsen and another fish from 7kg- so it seems the fishing is still quite good!

Conditions looks promising, and we are looking forward to the coming primetime weeks!!

Your team at the Norwegian Flyfishers Club