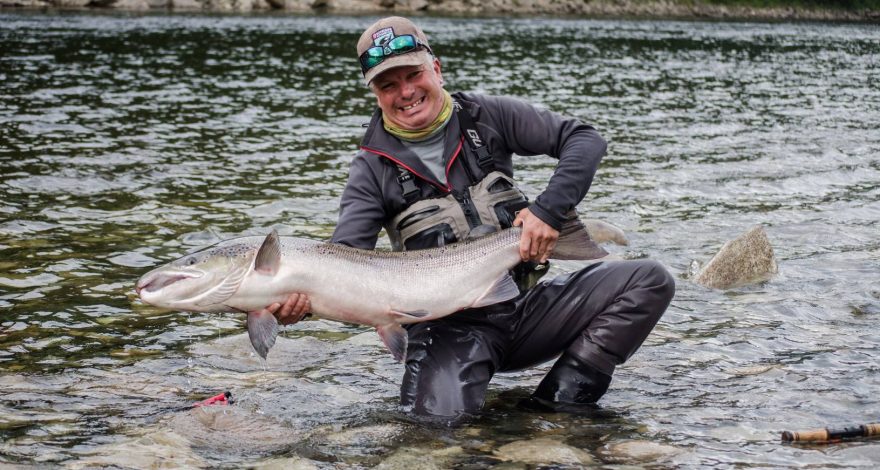 Week 28: Biggest fish of the season at Norwegian Flyfishers Club so far!

This week our French guest and friend Fabrice Bergues returned with his large group of French fishermen. The week started off with a great session for Francois Deloup who was able to catch 3 salmon on his first day, 2 of them he caught at Langøy (Beat B1) and the 3rd at Tilseth Pool (C2). The following morning, after the river rose a bit overnight, Fabrice fished Beat B1 and was able to land huge salmon of 120cm and estimated to weigh about 18,5kg  – what a fish! Not only Fabrice’s largest salmon to date, this is the biggest fish landed at NFC so far this season! 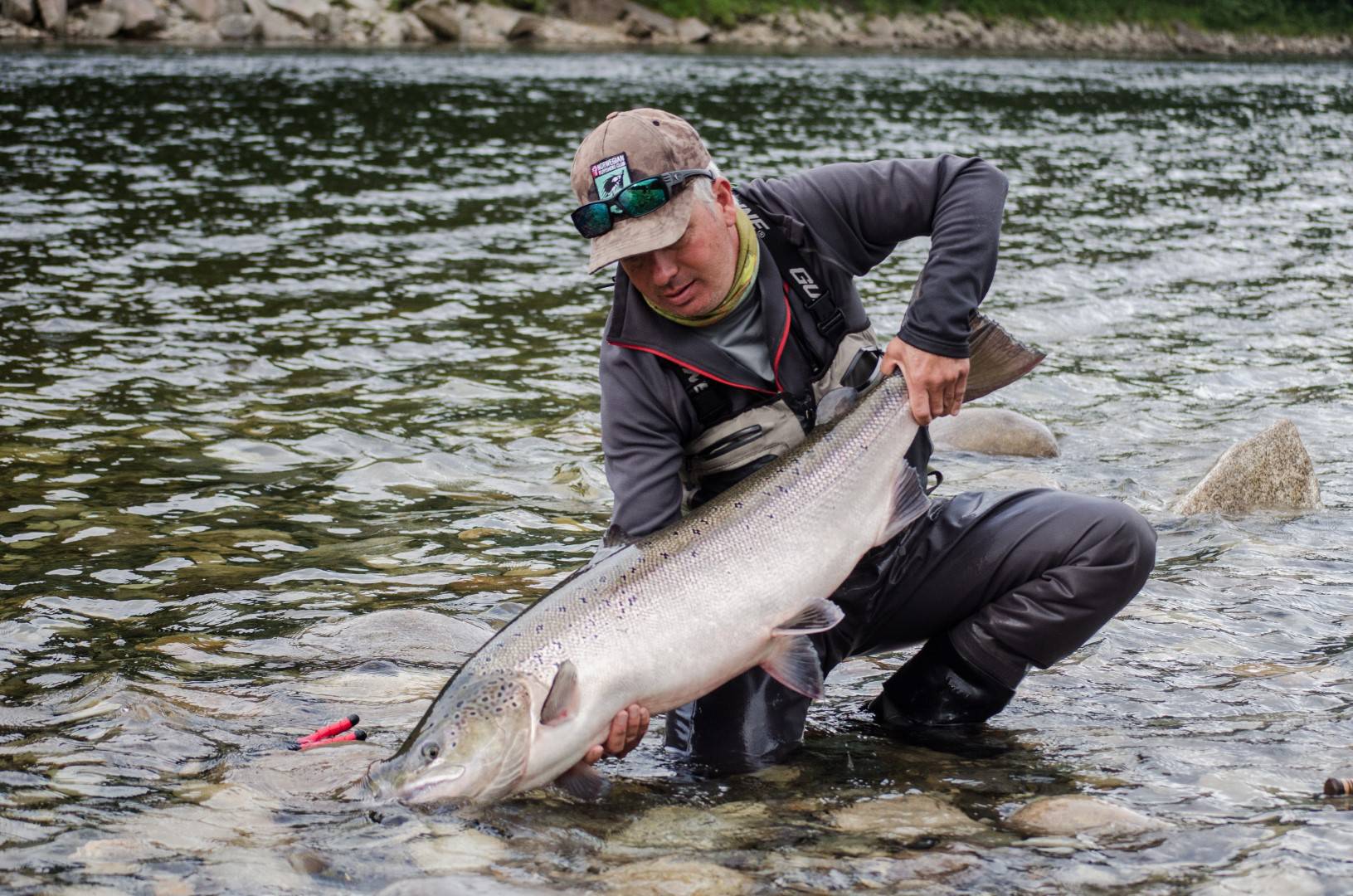 Fabrice with his big fish from Beat B1. 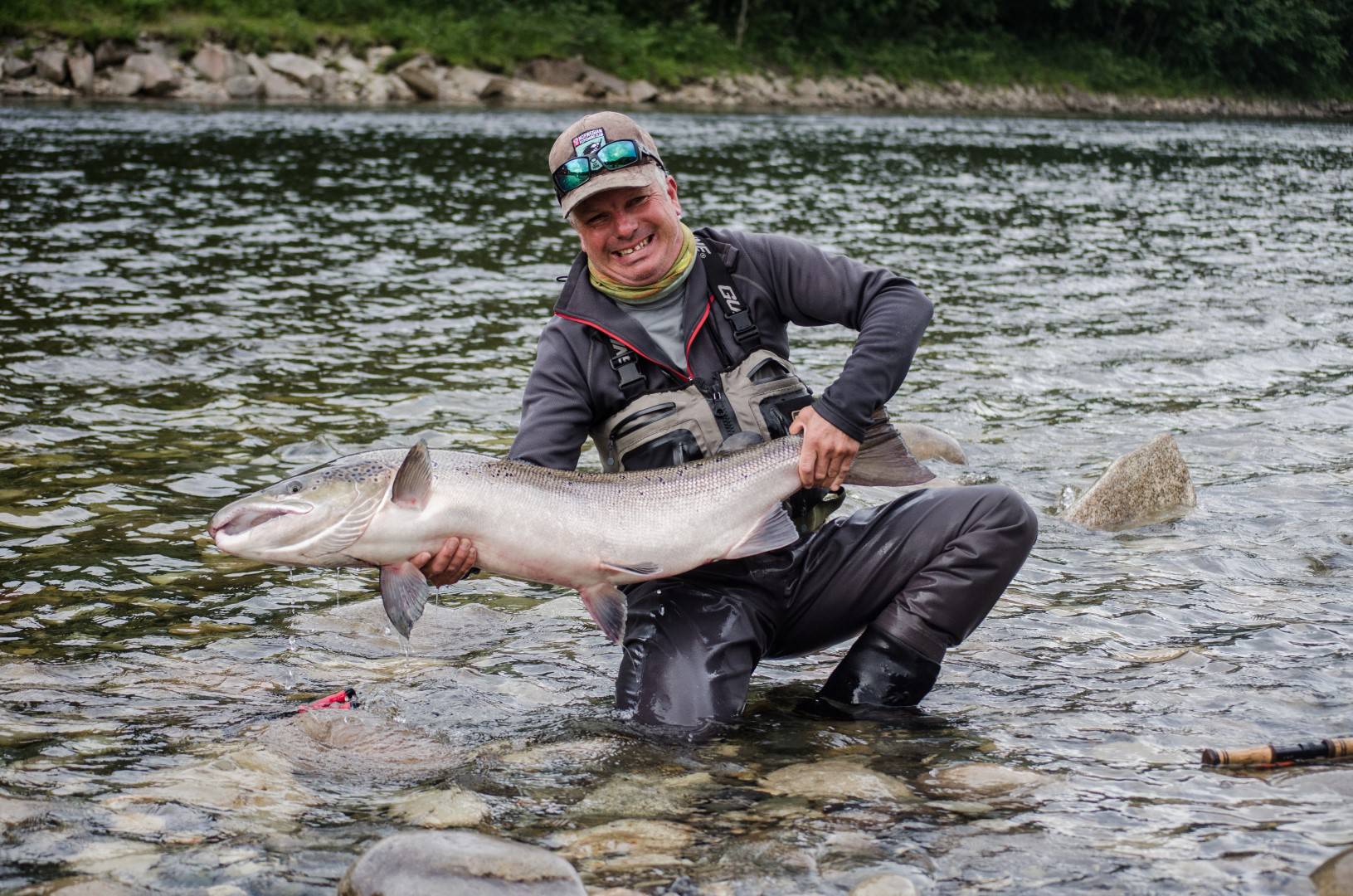 What a great fish – congratulations Fabrice! 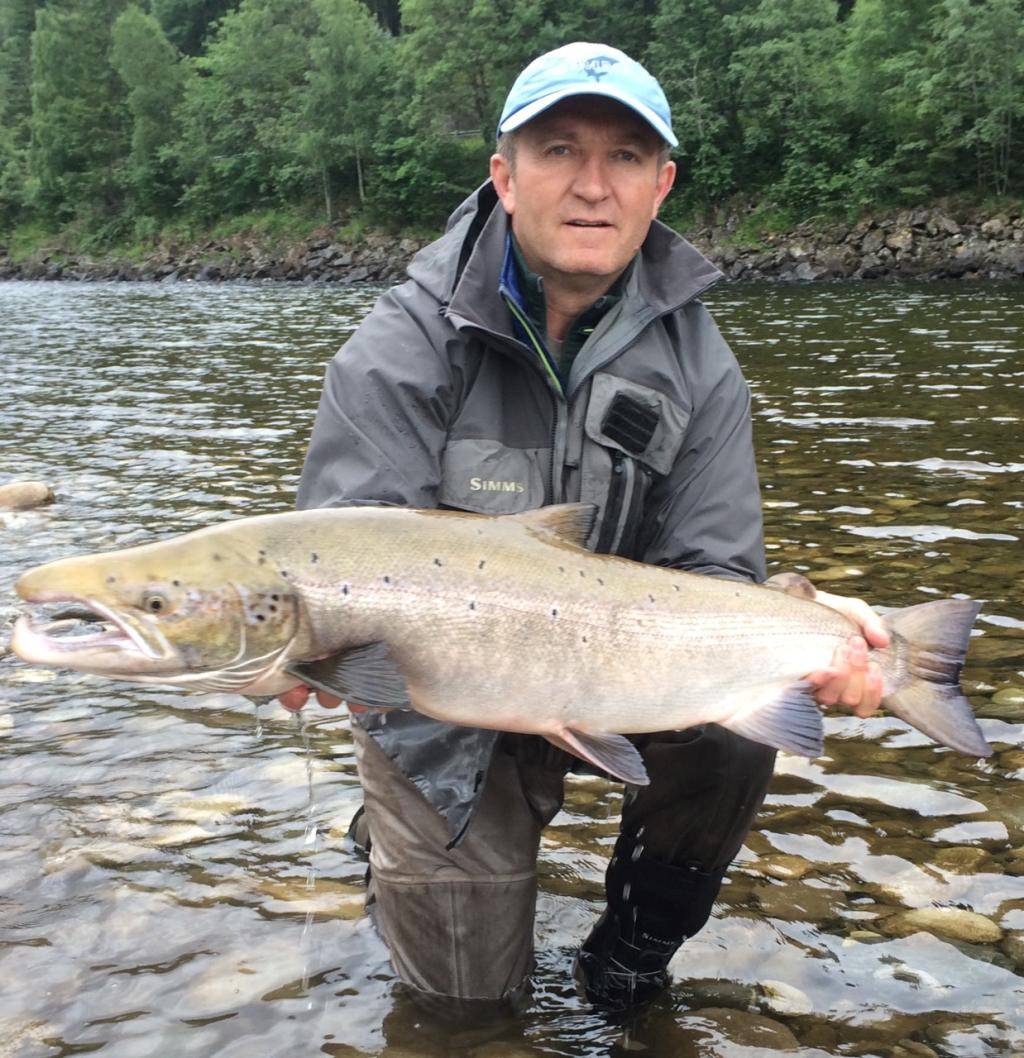 Francois with his first salmon of 9,5kg from Beat B1. 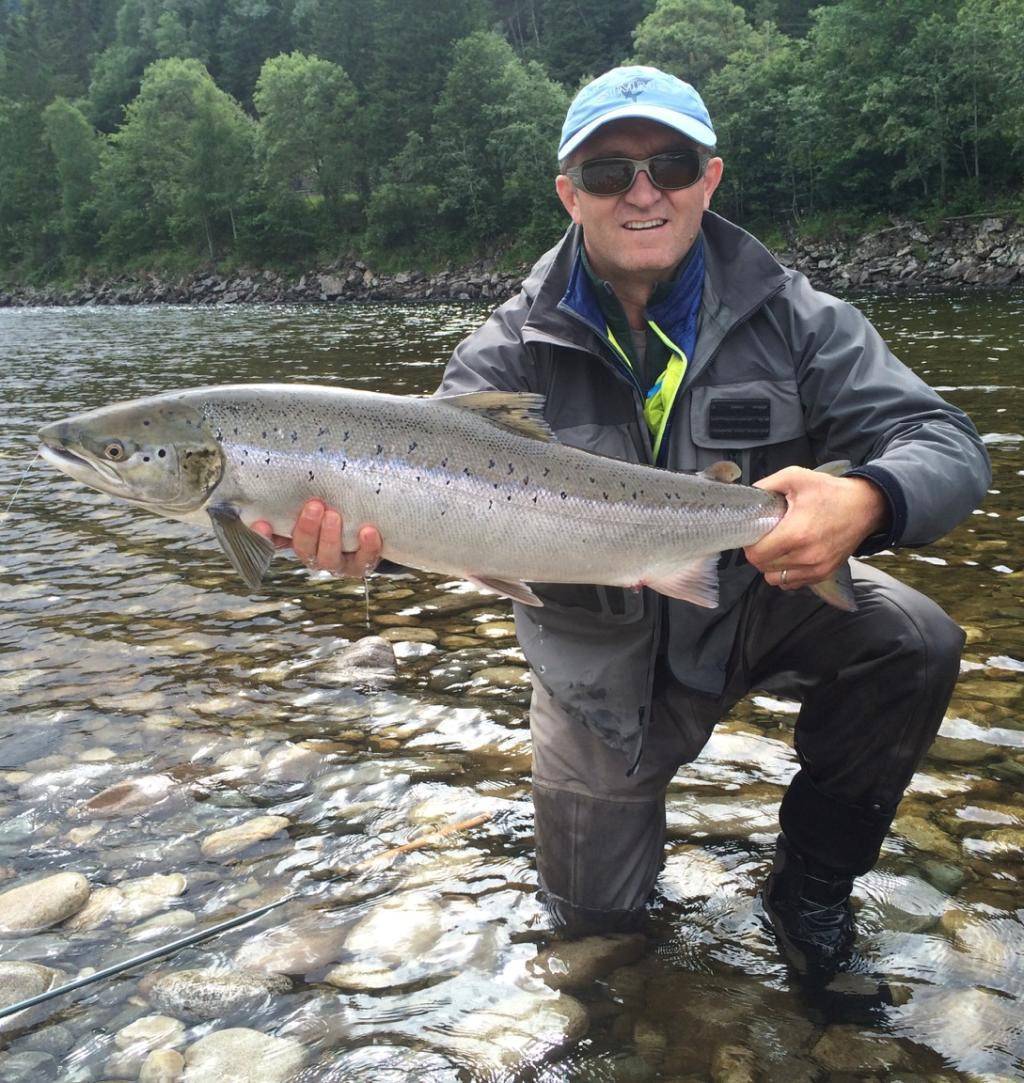 Francois with his 2nd fish of the day. 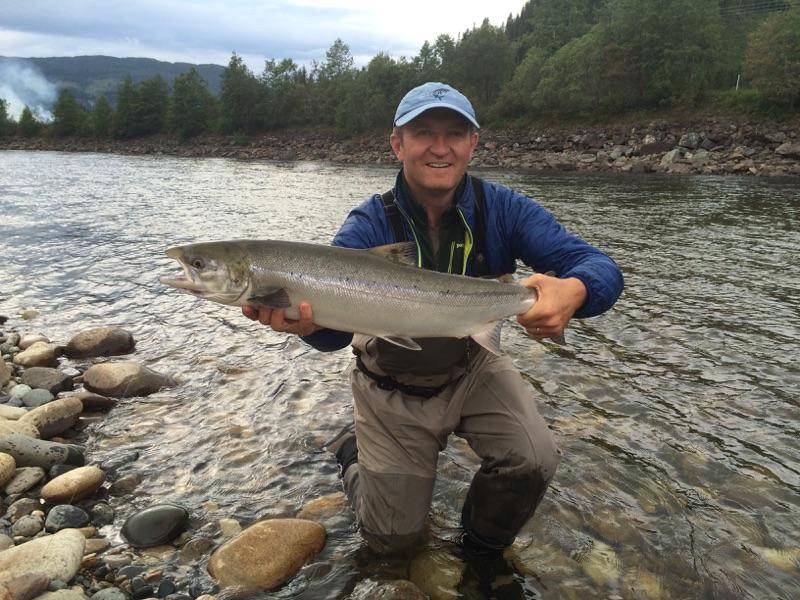 Francois with the next salmon, this time on Beat C2.

Our first time visitor Joe Layden was able to land his first Gaula salmon, a good sized grilse of about 3kg. NFC’s Daniel Stephan fished our Beat A1 and managed to land a nice fish as well, the fish measured 102cm and was estimated to weigh about 10,5kg. 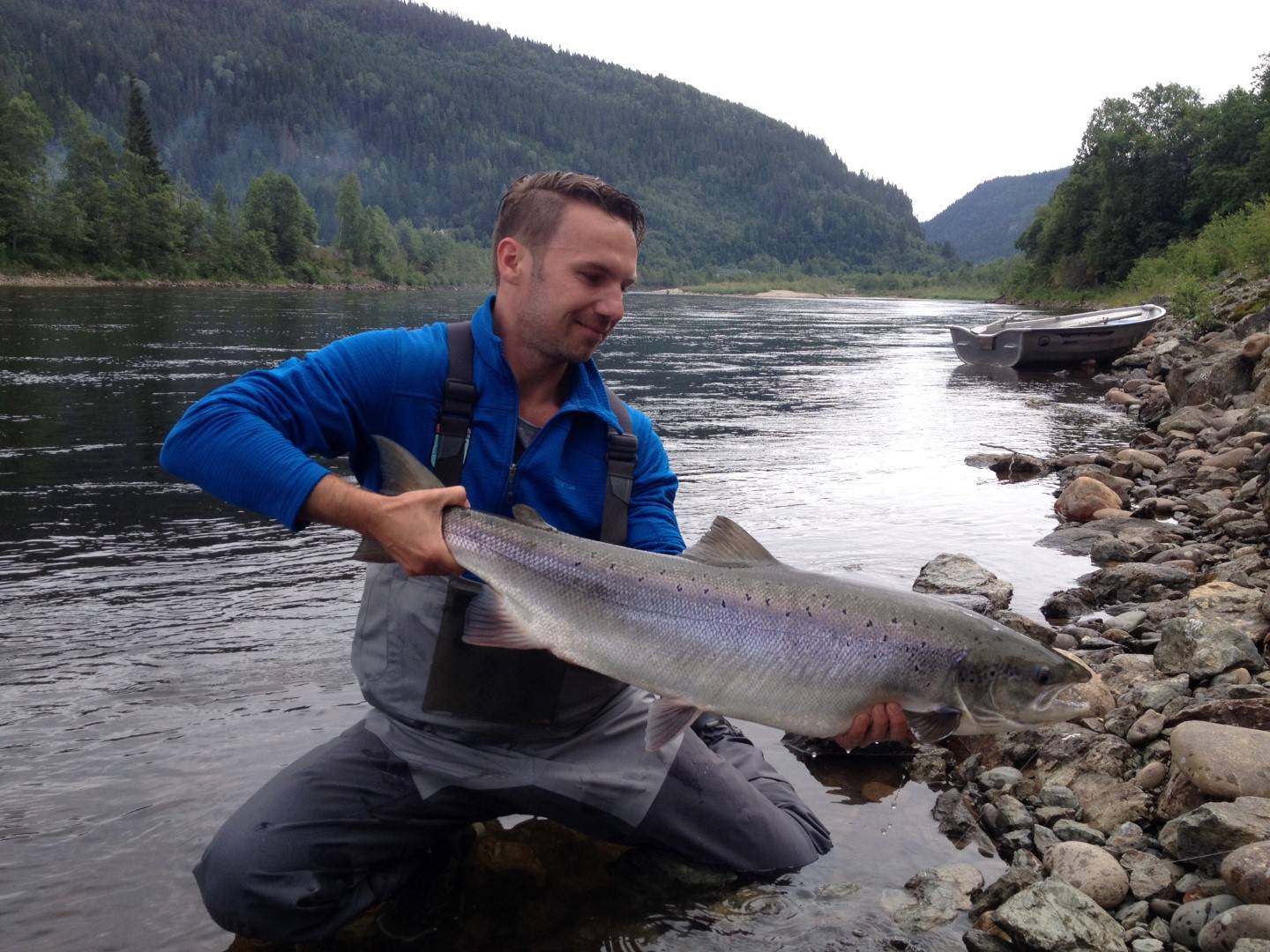 Daniel and his salmon from Beat A1.

On the next morning Francois Deloup was in the right place at the right time, and landed another good salmon, this time from Beat B2 and estimated to weigh about 6kg. 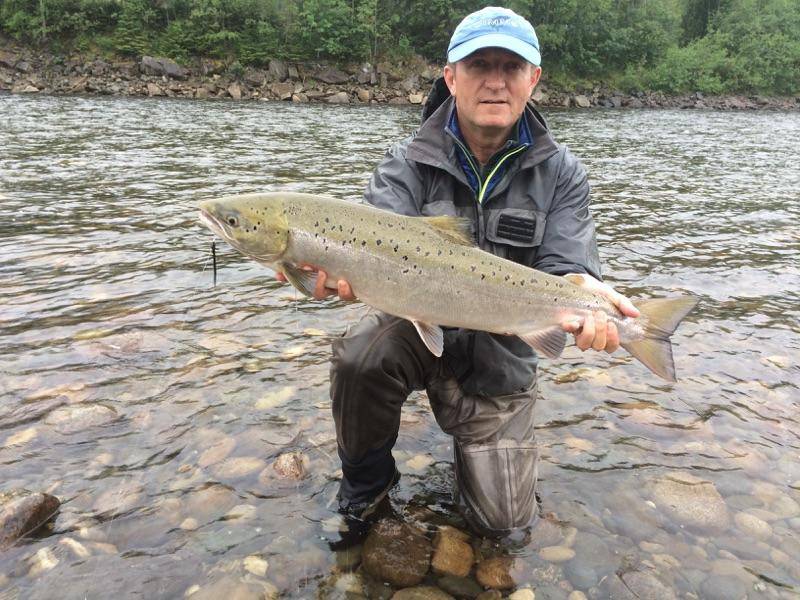 Francois Deloup with his 4th salmon of the week – 6kg from Beat B2.

Also NFC regular, French fisherman Fredric Andre managed to catch fish Nr. 2 and 3 that morning, again on Beat B1. Fredric’s fish were estimated to weigh about 8,5kg and 7kg. 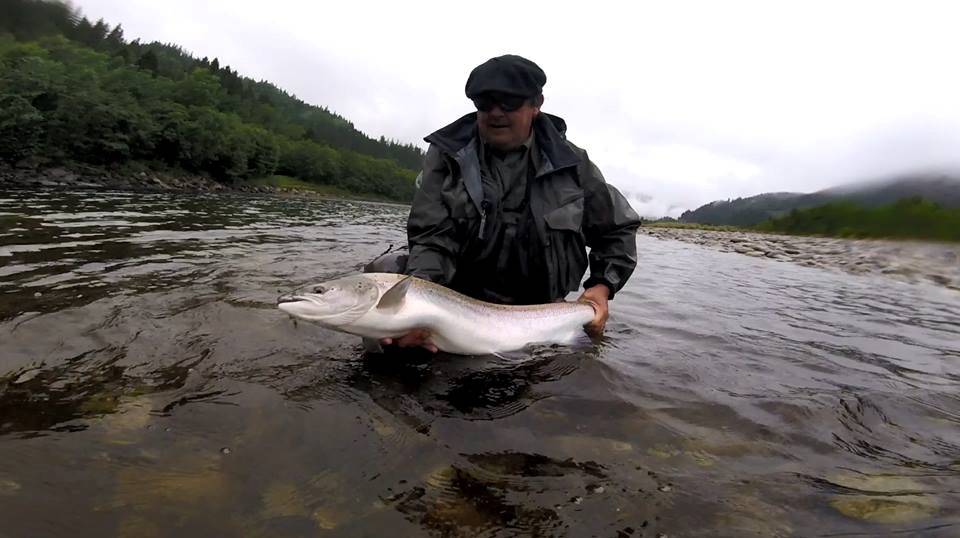 Fredric with one of his salmon.

A few grilse have been caught by Andre Scholz, Fabrice Bergues and Uli Dorfner.  German regular Andreas Grass managed to land a nice fish on Beat B2 of about 9,5kg. 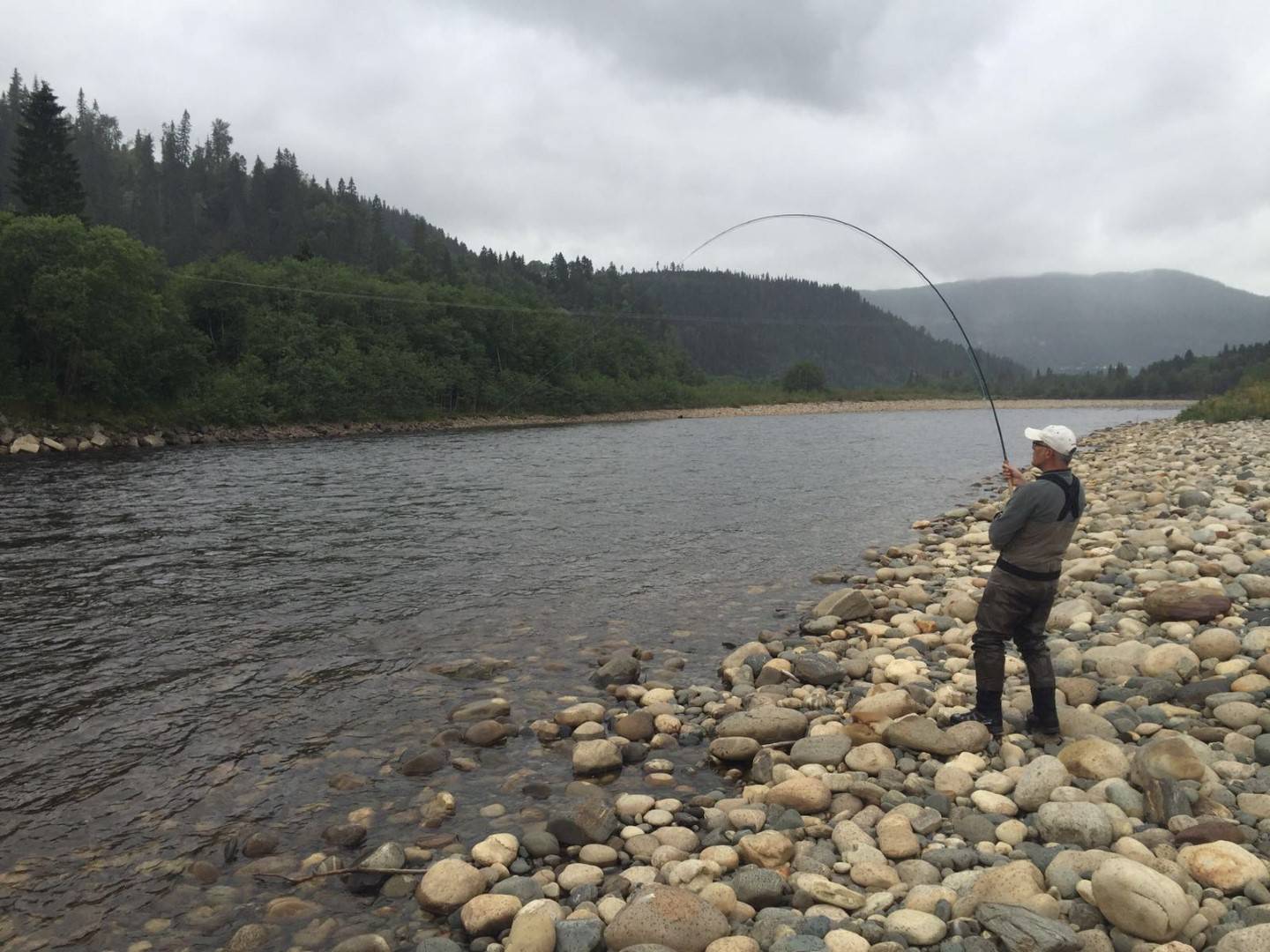 Andreas is into his fish on Beat B2. 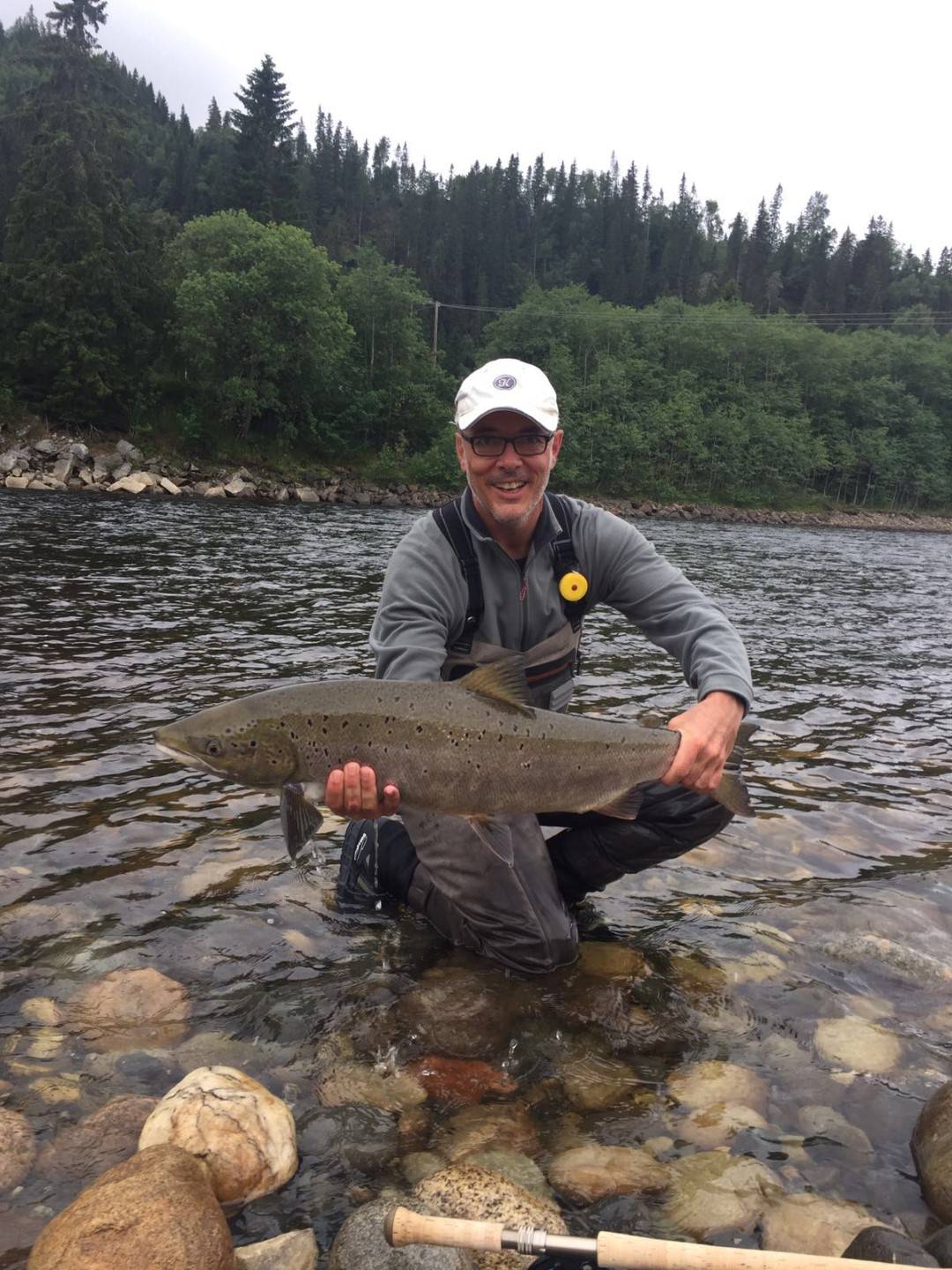 Andreas with his nice hen fish – approx. 9,5kg and of course released.

Several more nice fish have been caught during the week by Uli Dorfner on beat E5 which weighed about 6,8kg, by Jean-Luc Pouillen on Beat C2 of 7,5kg, Fredric Andre with another big fish of 9kg on Beat B1, Sven Hempel caught a nice fish on Beat E5 of 7kg, a grilse by Christoph Mathey, a 4kg-salmon on Beat BS1 by Joe Layden and the last fish of the week on Beat E3 caught by Andre Scholz which he estimated to weigh about 7kg.

Generally the fishing seems to have slowed down a bit this last week. It seems the fish are all settling into their pools, and waiting for the fall spawning, making them less aggressive. We think that the reason might be that there has been no big rise or flood since the season start, and therefore the salmon have settled a bit into their lies, and are less aggressive than usual. There is supposed to come a bit of rain which hopefully will help to wake them up again!

Our new week started last night, most fishermen just have started this morning, rather than fishing last night, so we hope to have a few new catch reports in by lunch time!

By the way, from next week onwards we have a few open rods – the big fish are here, so if you like to come up to Norway, please get in touch, you are welcome –and with rain in the future forecast– we believe it is going to be really good fishing after a good rise of the water!