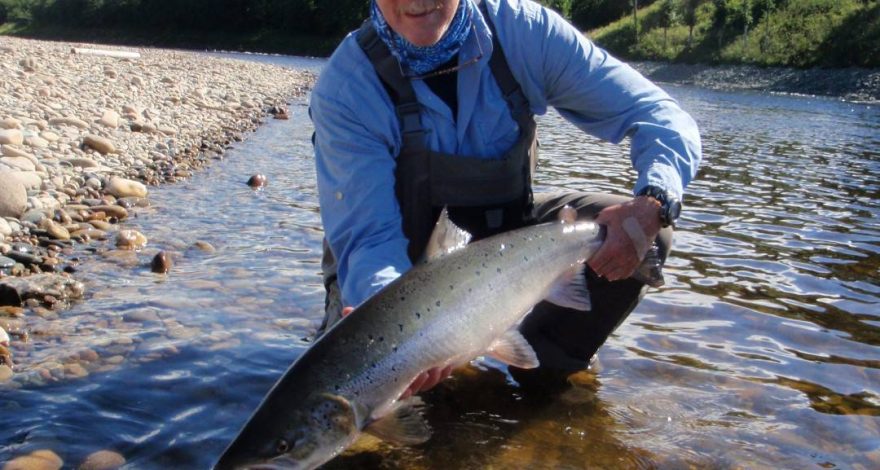 Week 29 because of the unusually low water, was less productive than a typical week 29 is supposed to be. The water continued to drop to a very low level and the fish have not been active at all. Since the river has not been rising for weeks, it seems as though the salmon in the pools have not been in any mood to take any flies. Nevertheless, a few of our guests were lucky and able to land some nice fish this week!

Our first time visitor Josh Heinz from the United States for example was able to land his first Gaula salmon on our Beat G1. A good and fresh fish of about 7kg. 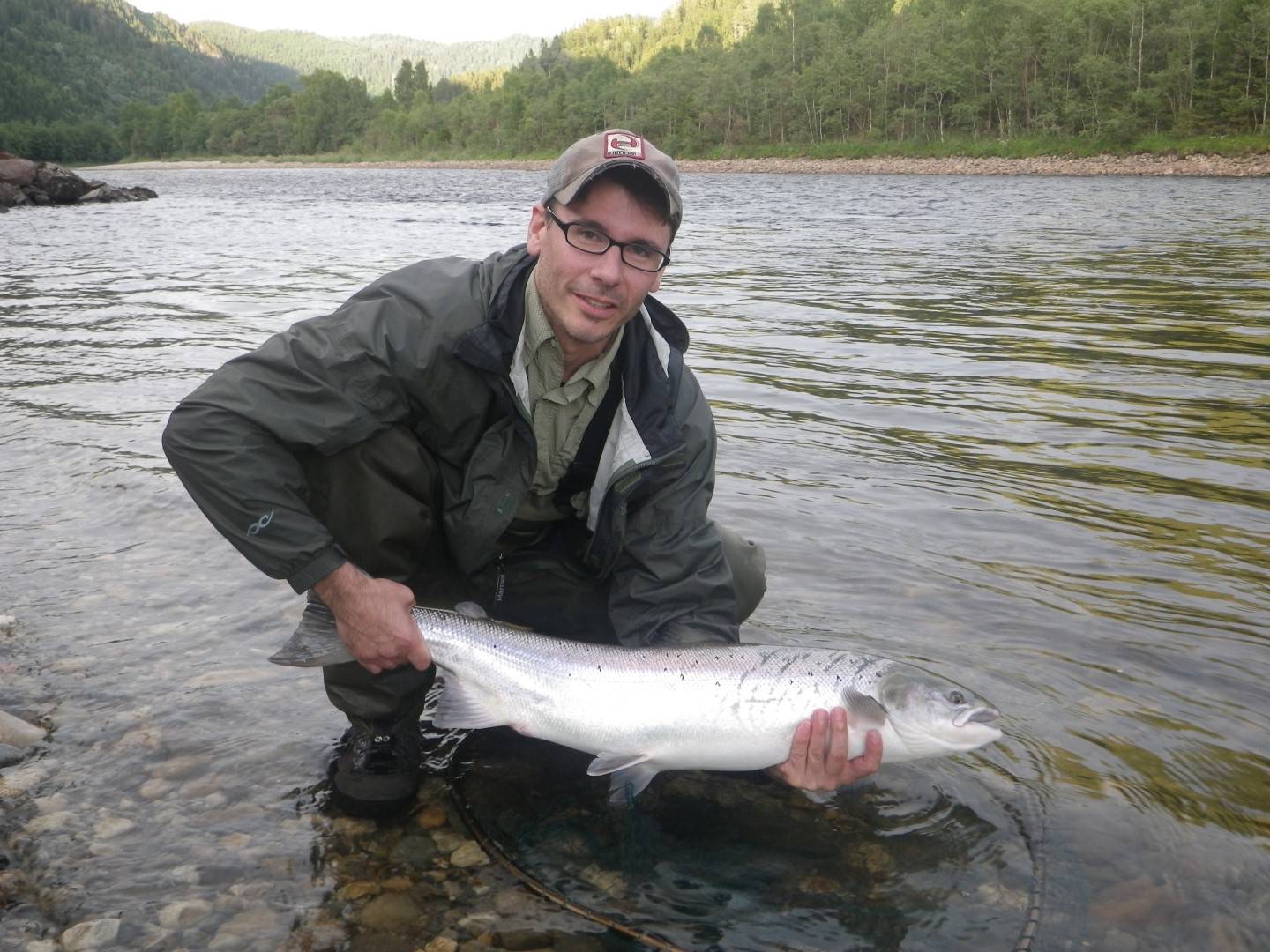 Josh Heinz with his nice salmon from Beat G1.

A couple of grilse have been caught by Richard Brodski, Mike Gibbons and Christian Grevendahl. We also had a female angler from Slovakia, Kristina Brodska who was fishing with us this week. After losing a good salmon on Beat E7 right as she was landing it, she managed to land the biggest seatrout on our beats for this summer so far. She estimated her seatrout to weigh about 4,5kg. 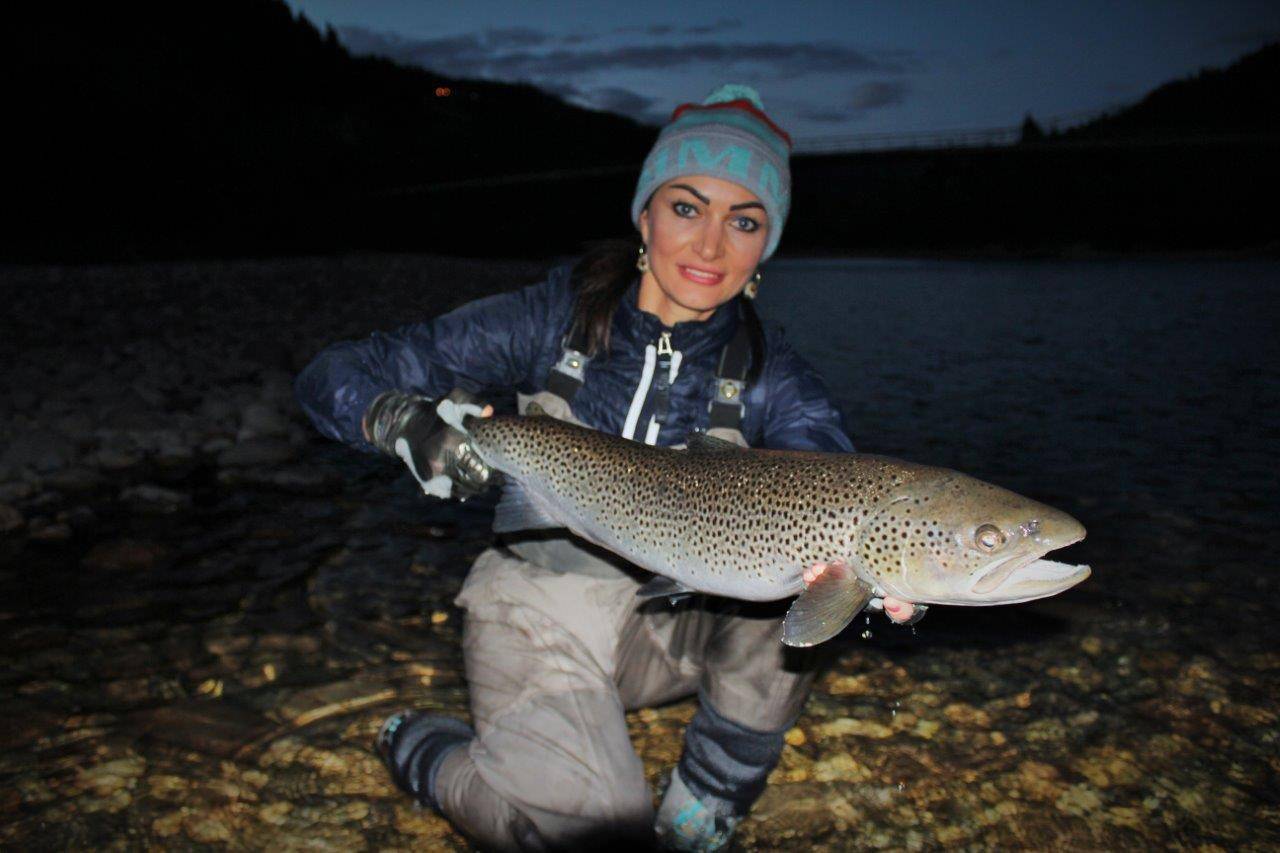 Kristina with her nice Seatrout from Beat G1.

Also John Bleh managed to catch two fish this week, a grilse and nice salmon of about 7kg from Beat E7. 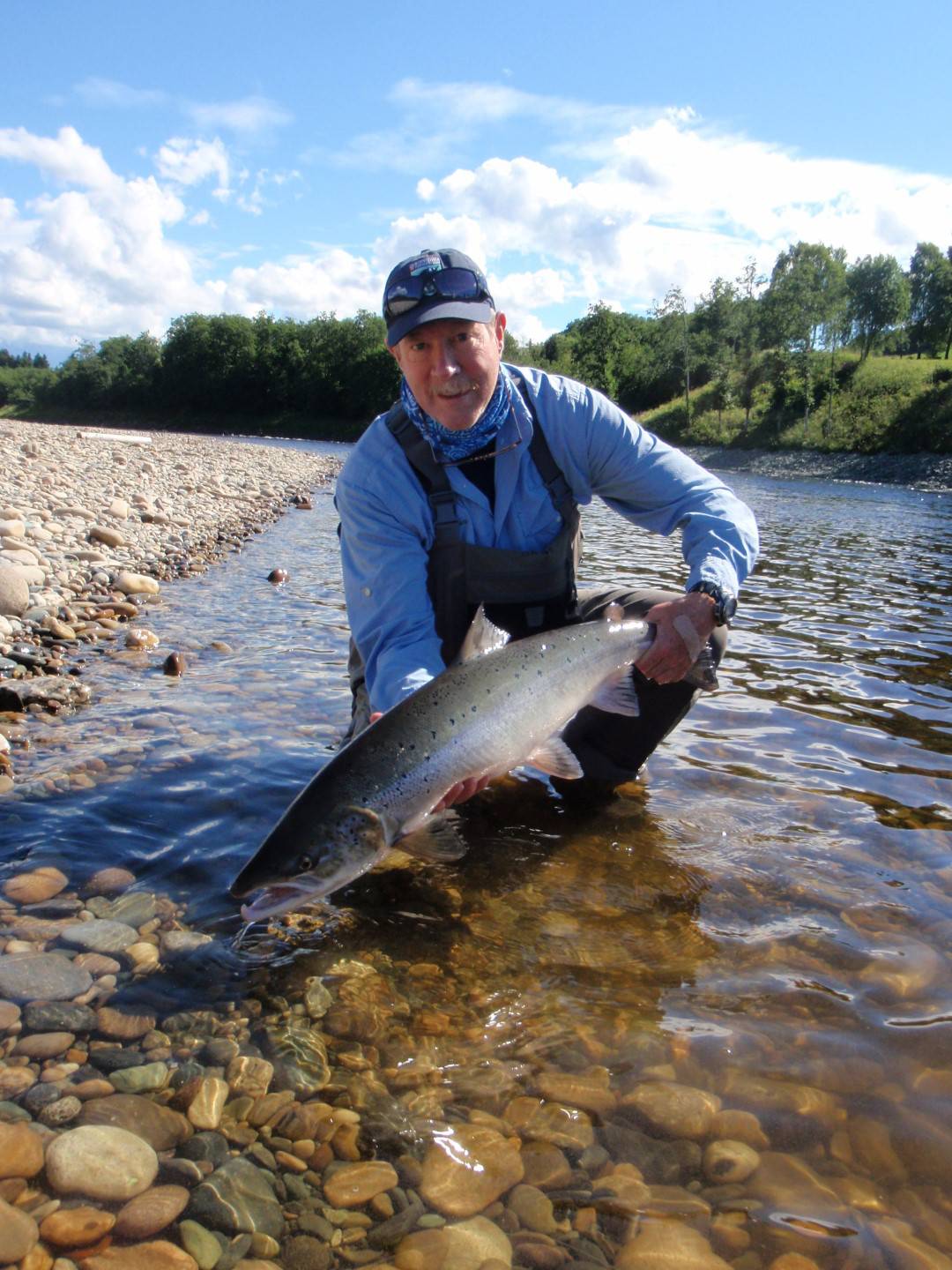 John Bleh with his salmon from Beat E7.

Beat E7 has been fishing well, almost all season – so we are glad we have been able to integrate these new E-Beats into our rotation. It seems as though Beat E7 even holds fish, which is very rare on the lower river to have a holding pool. But also E6 is fishing well now, especially in very low water. Richard Brodksi was able to catch 3 more grilse during his stay, and as it was his first trip for Atlantic salmon, even smaller fish were able to put a smile on his face – good to see! 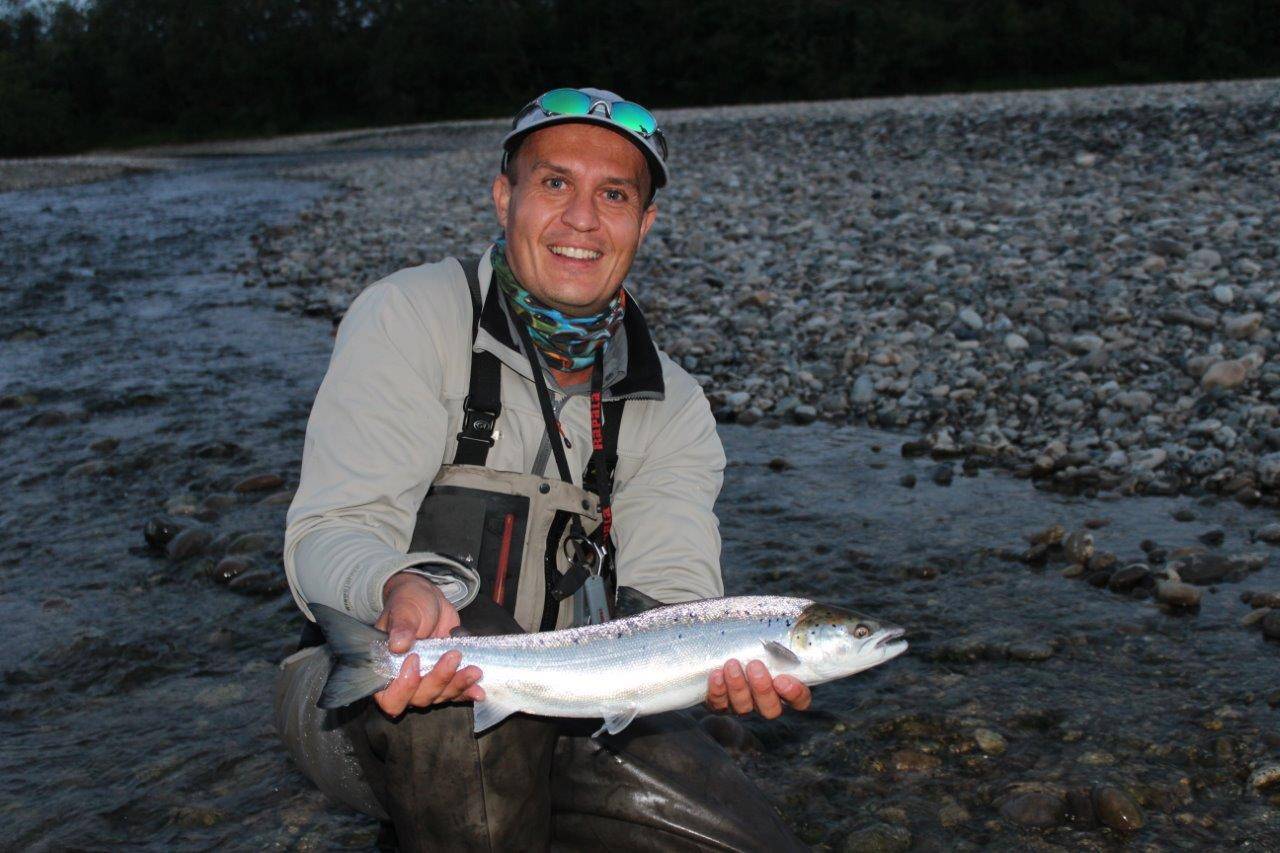 Richard with one of his grilse from this past week.

Also Ludevit Kurpas caught a nice fish on Beat E7 this week after loosing a couple of slalom earlier on. 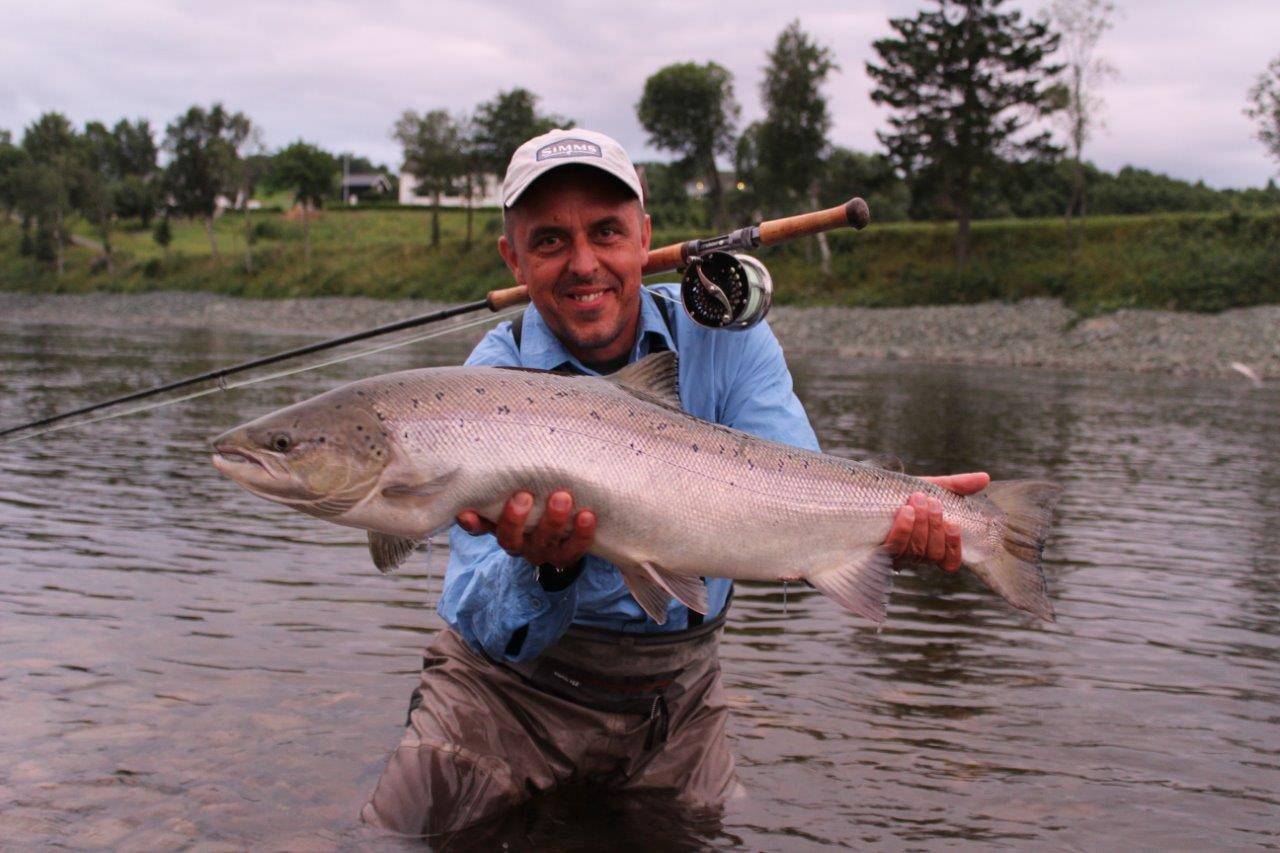 Ludevit with his nice salmon from Beat E7.

Finally during Saturday it started to rain heavily, the river stared to rise and continued all Sunday and Sunday night! So we got the rain we desperately needed – sadly due to this long period of dryness the river became quite coloured due to debris in the river and the visibility is a bit low for the fly during the day, but it will clear up shortly and we are sure we will have some new catch reports very soon!