Week 30: With much needed rain, and a rising river, some great fish have been caught!

Earlier this season we had our friends at InWaders Media, Frederik Lorentzen and Jan Delaporte come and shoot a beautiful short film on our waters, and we wanted to share it with you all. We hope you enjoy watching it!

The week kicked off with rising water on Sunday night, and with the turbid, dirty water which pushed downriver, it took a while for the fish to wake up and get into the biting mood again, after a long period of low water. The next morning would turn out to be a great one for our German guest Matthias Vorweg who was able to land a grilse and a nice salmon about 5,5kg on our Beat B1. As well as Brendan Pitchard, who caught a nice fish on Beat E7 of about 5kg, fresh and sea-liced! Also our French group started well with a nice salmon for Fred Staerk on Beat BS1 which he estimated to weigh about 6,5kg. 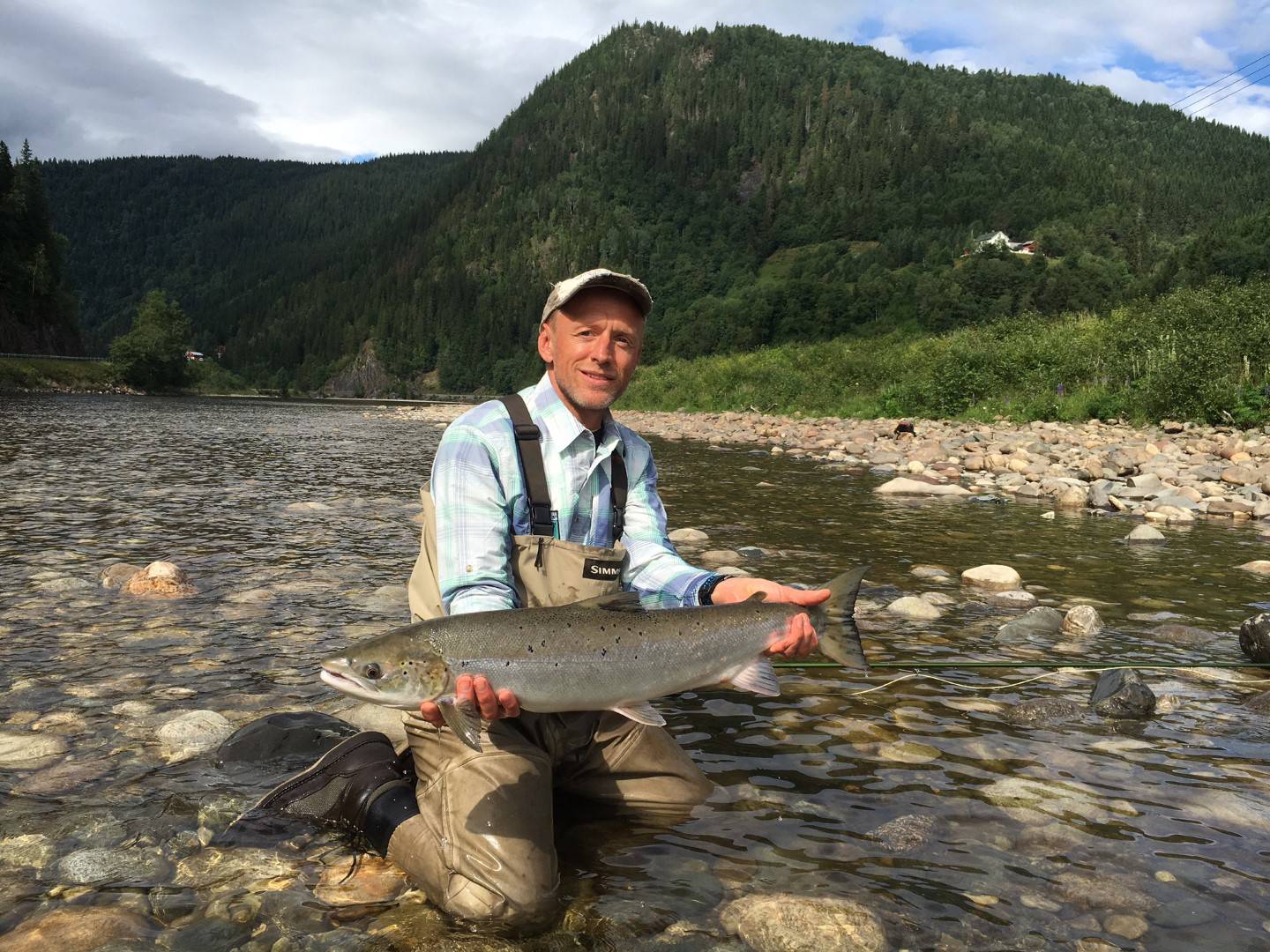 Fred Staerk with his first salmon of the week from BS1.

During the evening Fred caught another fish on Beat B2 weighing about 6kg. On the next day he and his friend Jean-Marie Freund fished Beat C2 and caught each a salmon during their session. Jean-Marie’s salmon measured 105cm and probably weighed about 11,5kg! 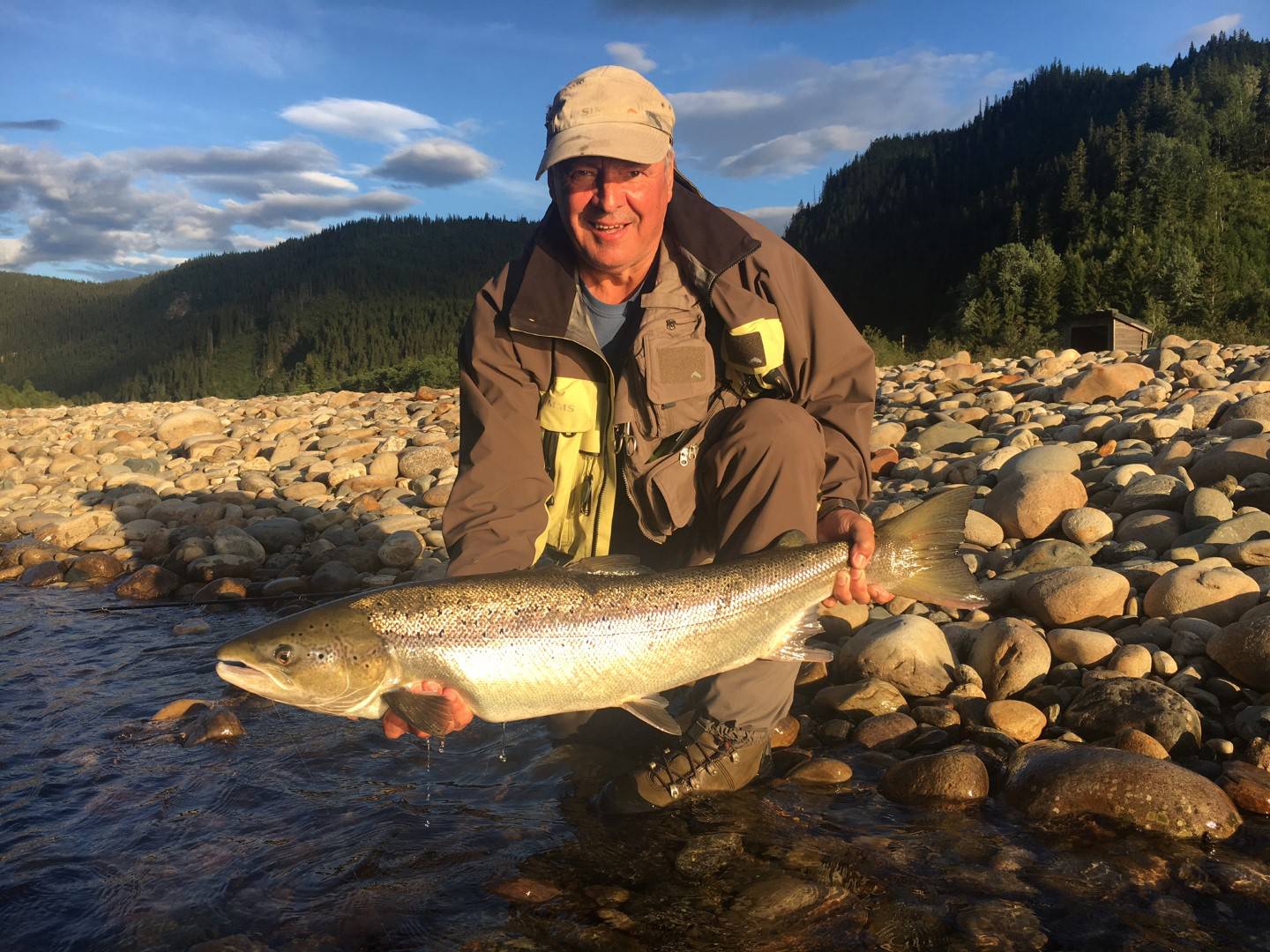 Fred’s 3rd fish of the week estimated to weigh about 6kg and was caught in beautiful Sunset light on Beat C2 as well. 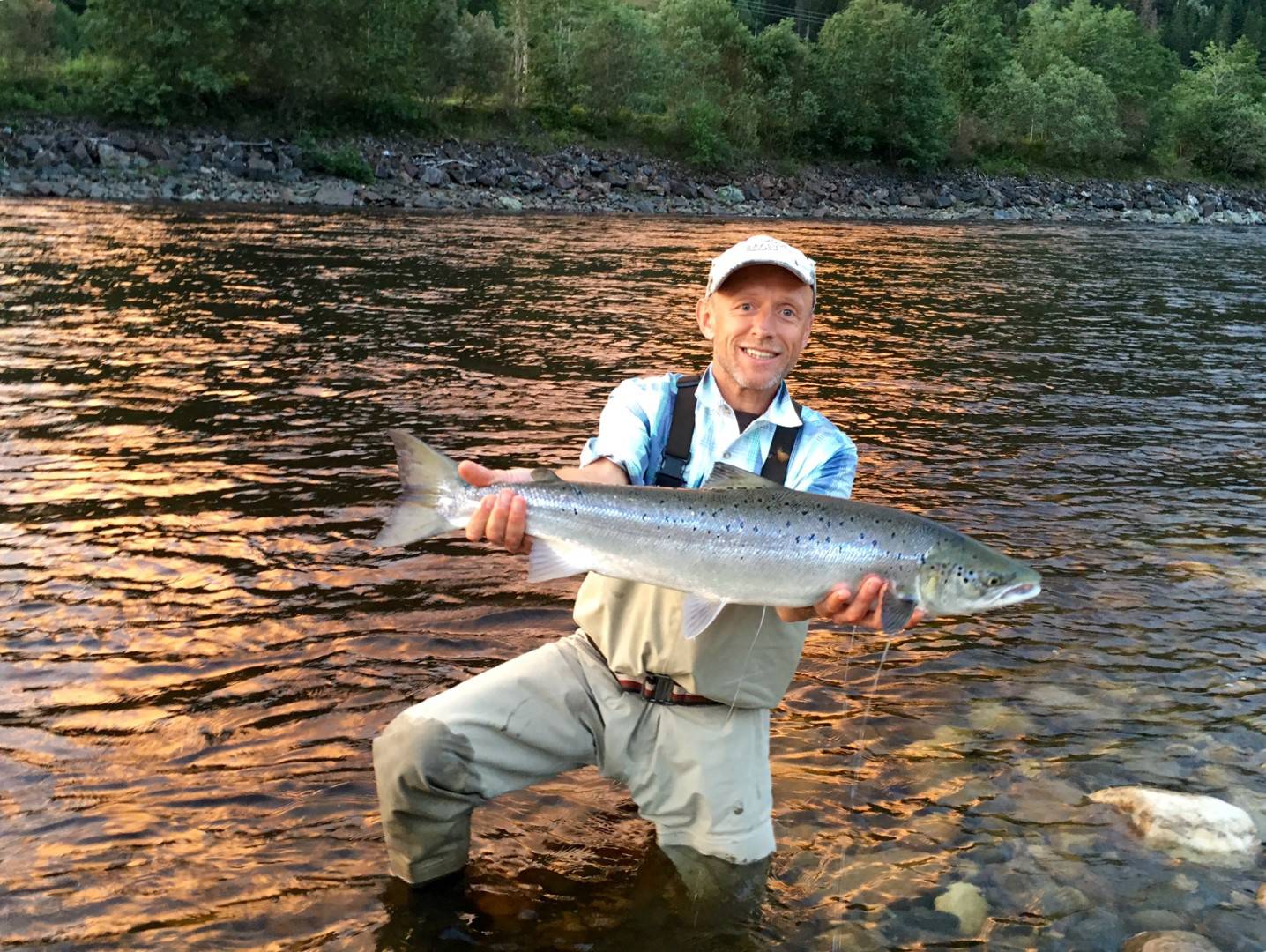 Fred with fish Nr.3 of the week – fresh and silver!

Next it was Olivier Tisseraud who managed to catch his first Gaula salmon of about 6,5kg on Beat M, right below the lodge, as well as being able to catch another seatrout as well. Also Yannick Kopff landed two grilse during the same days. A couple of grilse were also caught by Takeo Osawa and Philippe Koehler. Jean-Marie Freund was able to catch another salmon of about 4,5kg while Fred Staerk finished his week with another nice fish of 6kg on Beat B2. Beat B2, Renna, has started to produce some nice fish now later in the season– it has been slow for most of the season so far, but suddenly it seems to hold fish and more and more fish are taken on that nice piece of water. It shows that pools that don’t get fished, certainly don’t produce fish, so it is important to fish all pools- especially those that others overlook! 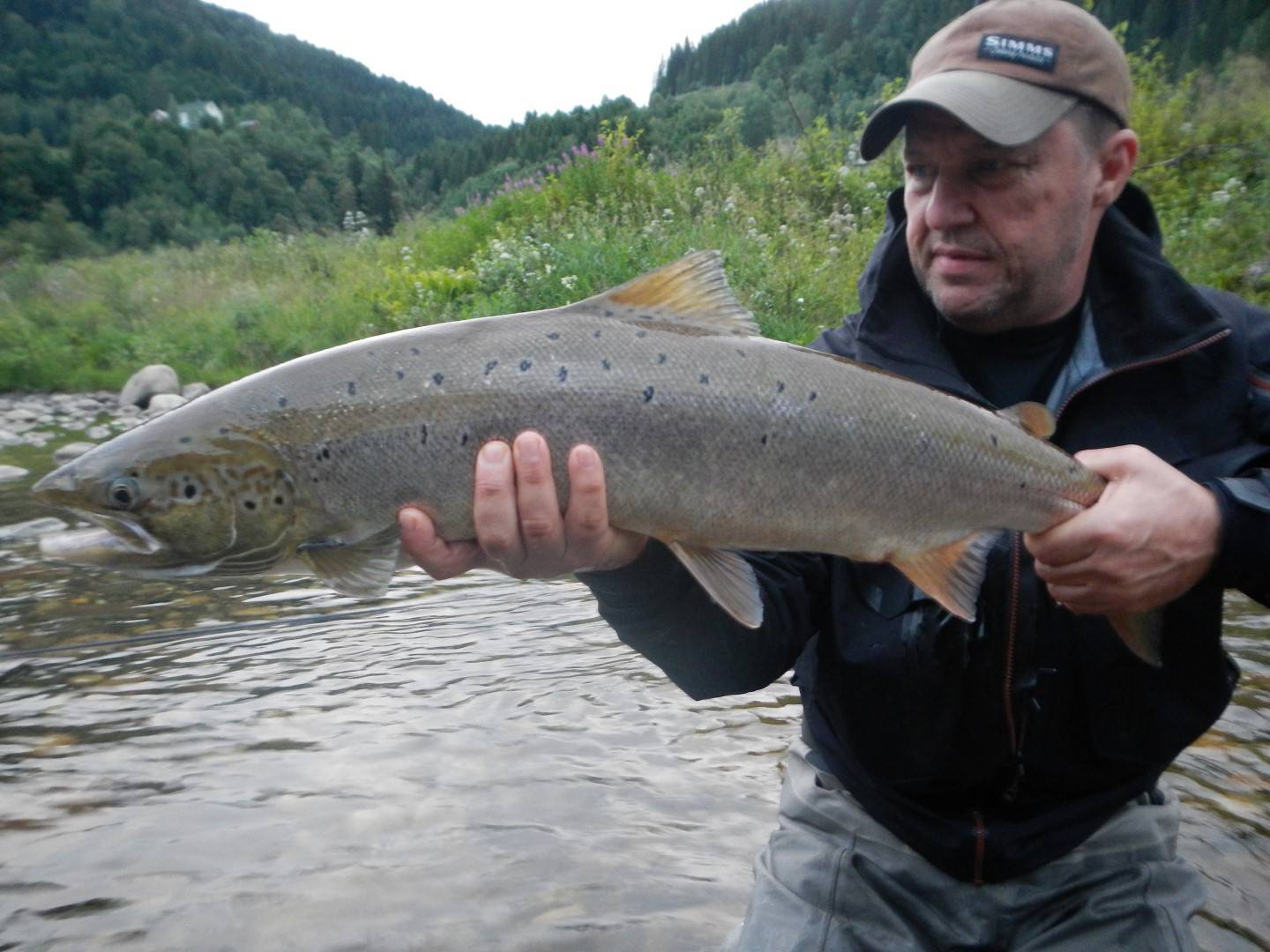 Philippe Koehler with a nice girls from the past week. 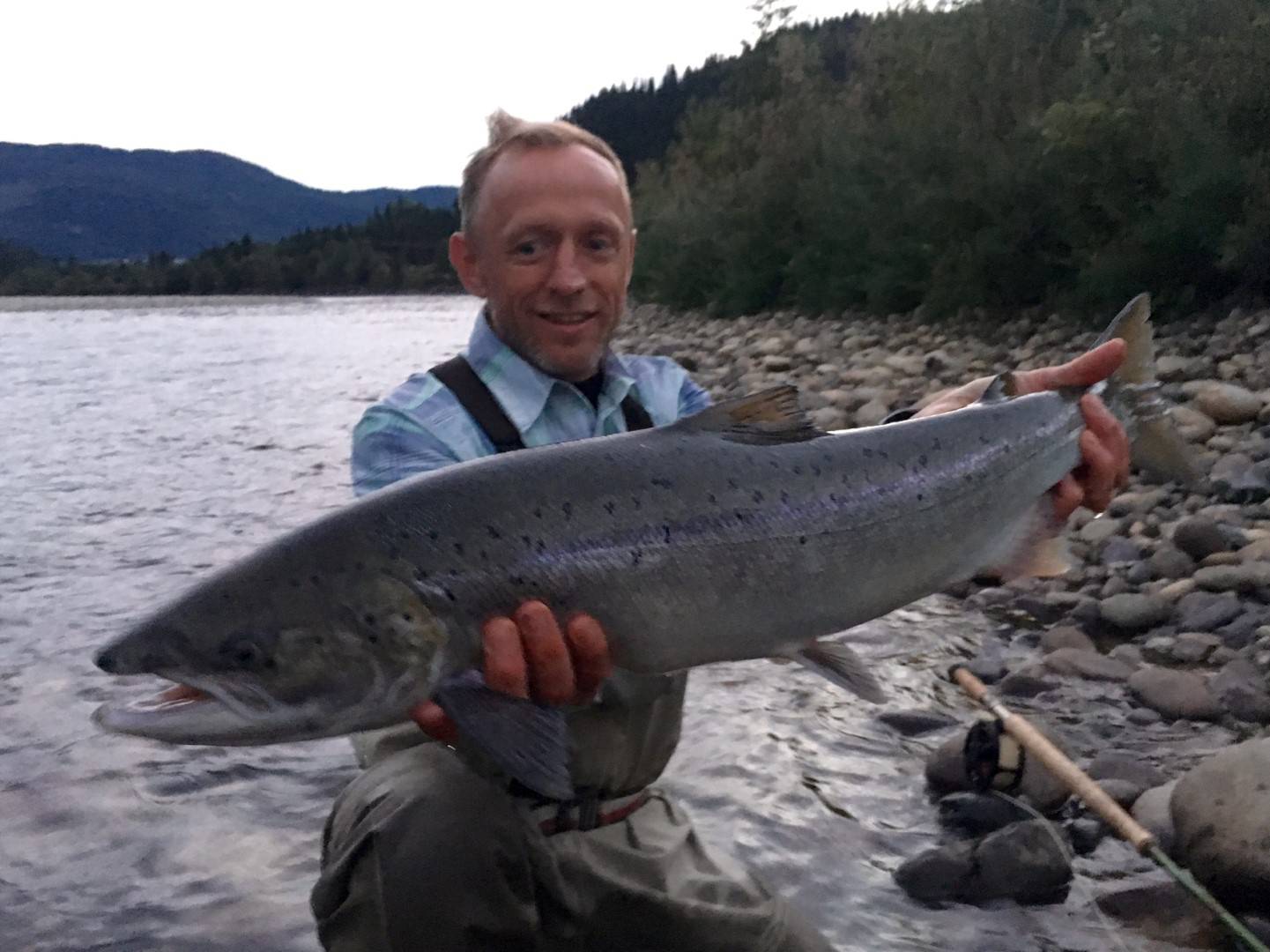 Fred with his next fish – this time again from B2.

The water continued to yoyo this past week, rising with the rain, and dropping quickly as it dried, which is never great for the fishing, but it certainly makes fish move after this long period of lower water. We have received some more rain for the beginning of this new week, and already some new fish are in the statistics. It looks as though the fishing is continuing to improve and we are looking forward to the days to come!

We actually have a few available rods for the next two week, so for anyone with the salmon itch, and the ability to pull the trigger on a last minute trip up here – you are welcome to contact us and we will do our utmost to accomodate you.