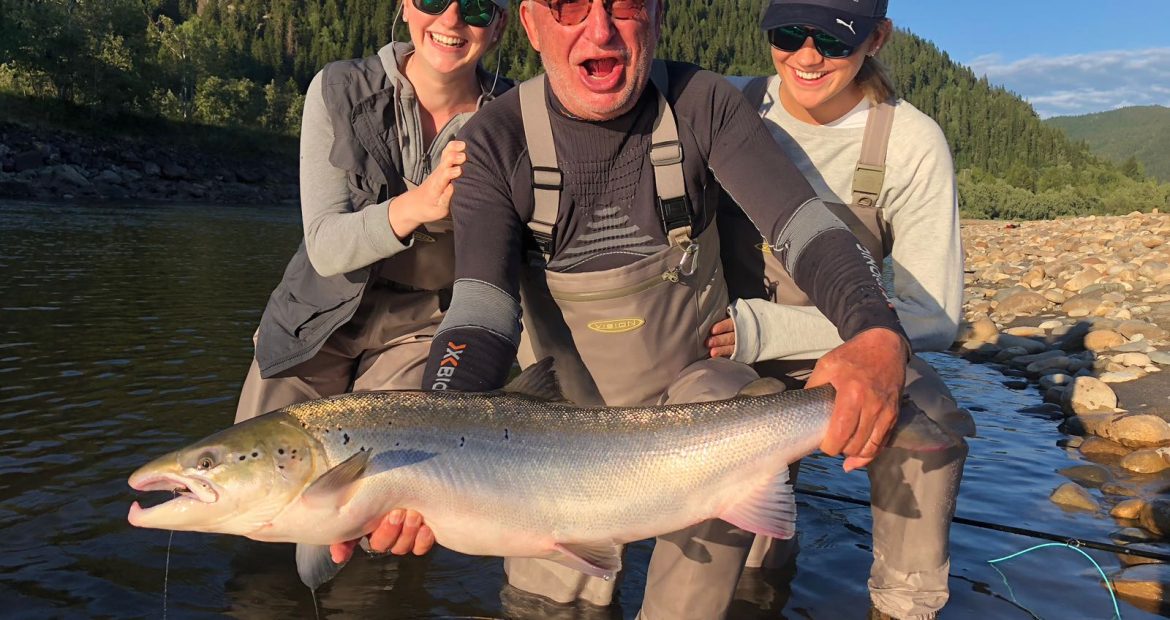 We apologize for the slower than usual updates (due to some technical difficulties), but we want to catch you up on how the season has developed. Backtracking to week 28- here was how the fishing was: Despite very low water, some great fish were caught!

Week 28 started again with very low water. Its incredible that in this part of Norway it has been so dry for so long. But we have to take it as it is, and even our newly arrived guests did their best to make the most of the conditions. Blaine Lyon, 16 year old casting champion from Scotland started the week with a good fish just above our Lodge – Blaine estimated to weigh the fish about 4,5kg (10b). 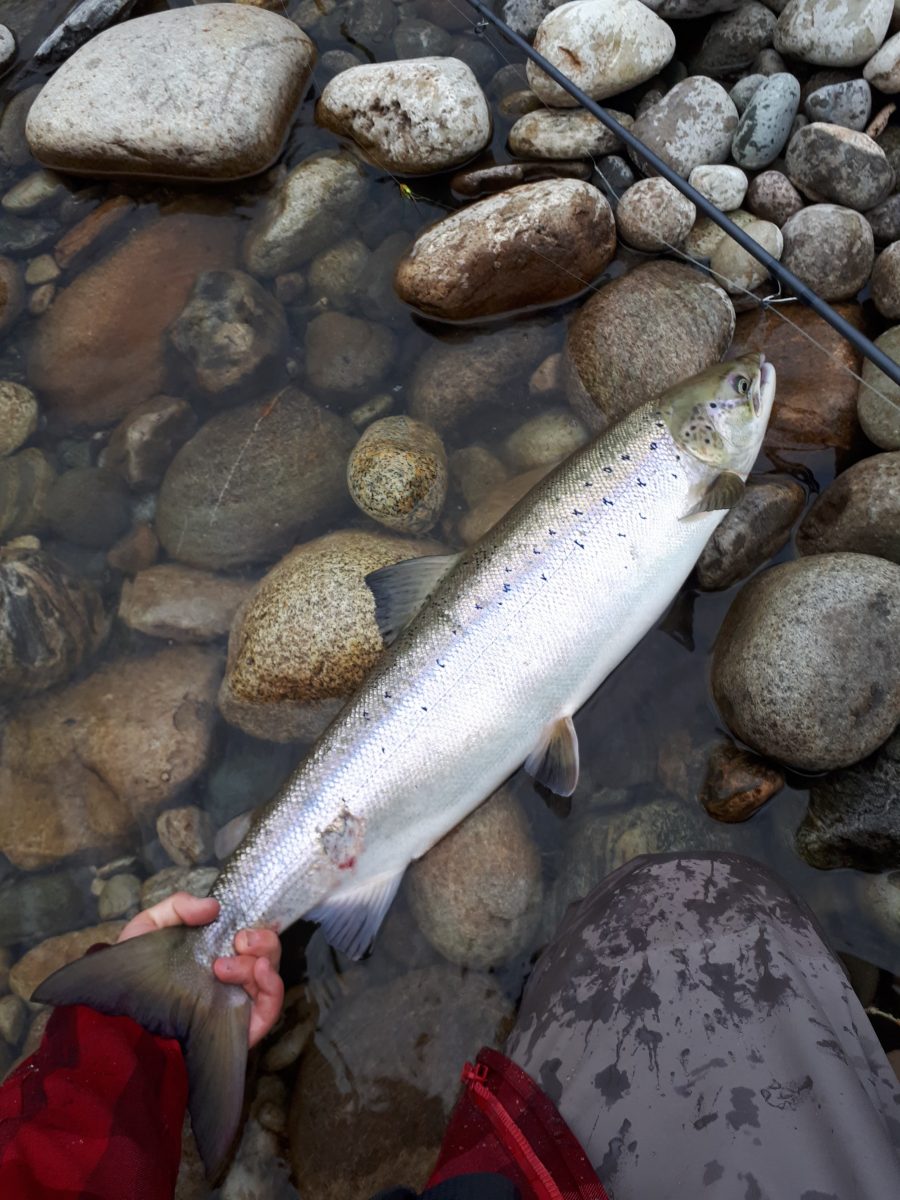 Blaine holds his fish from our Beat M.

The next day started with a grilse from Beat E1 a, caught by Georg Weiner. During the night Spanish angler Alvaro Santillan had a great session on our Beat above the Lodge. He was able to catch and release two nice fish and lost a much bigger one! 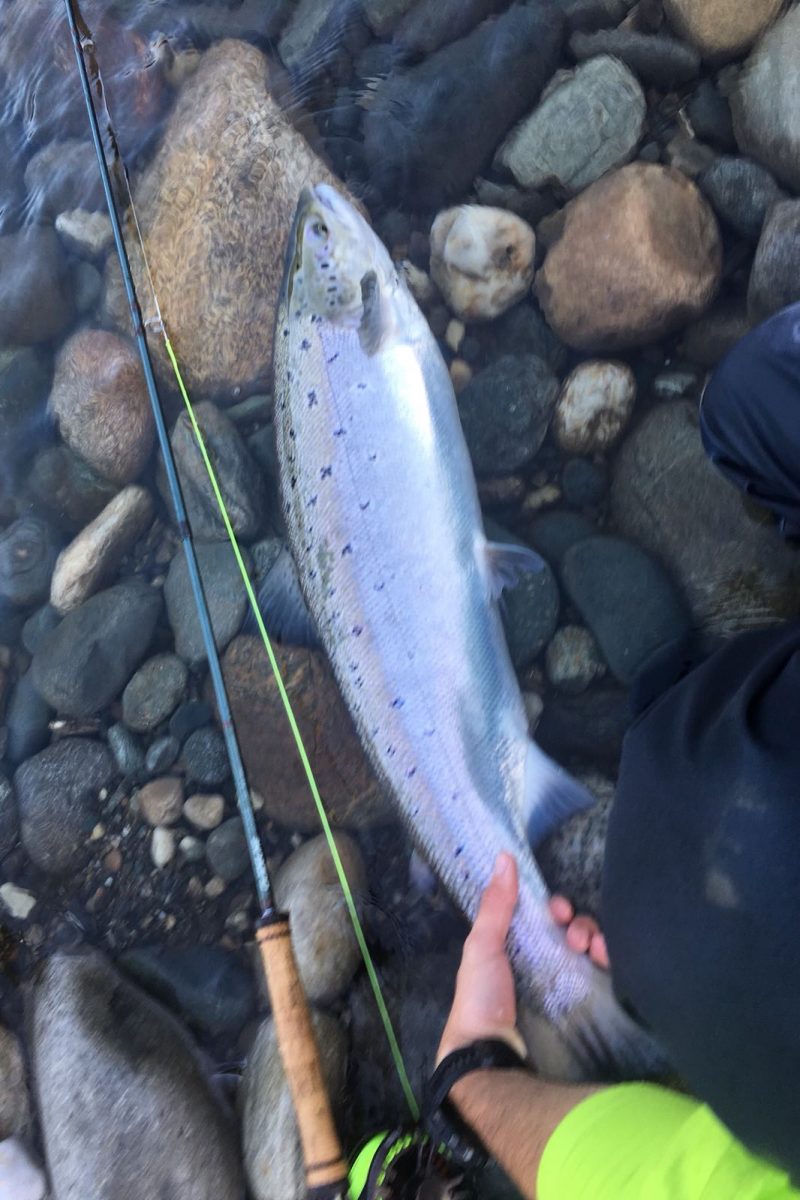 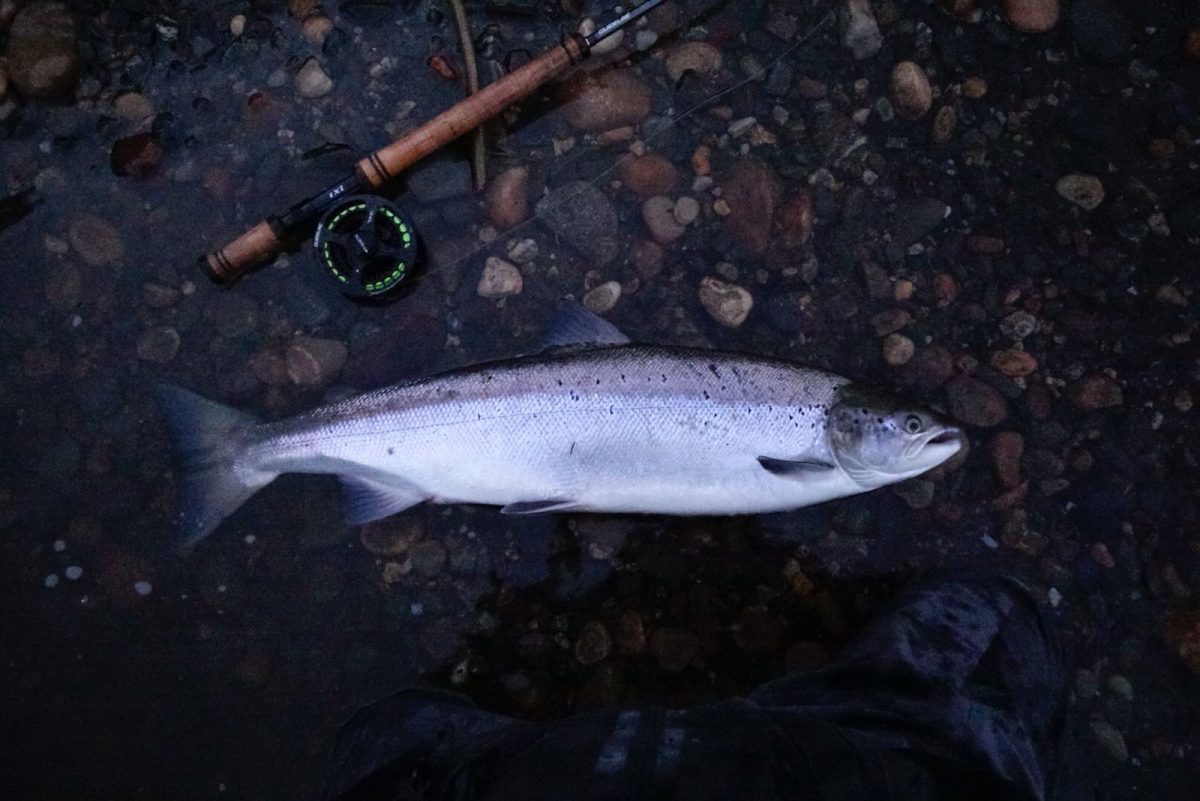 Alvaro’s 2nd salmon of the session. A good number of fish have been running these past few days!

After a small rise due to some thunderstorms in the Bua valley we had some nice fish been caught the next day. It started off with a salmon of 80 cm by Christophe Gerber on Beat C2. 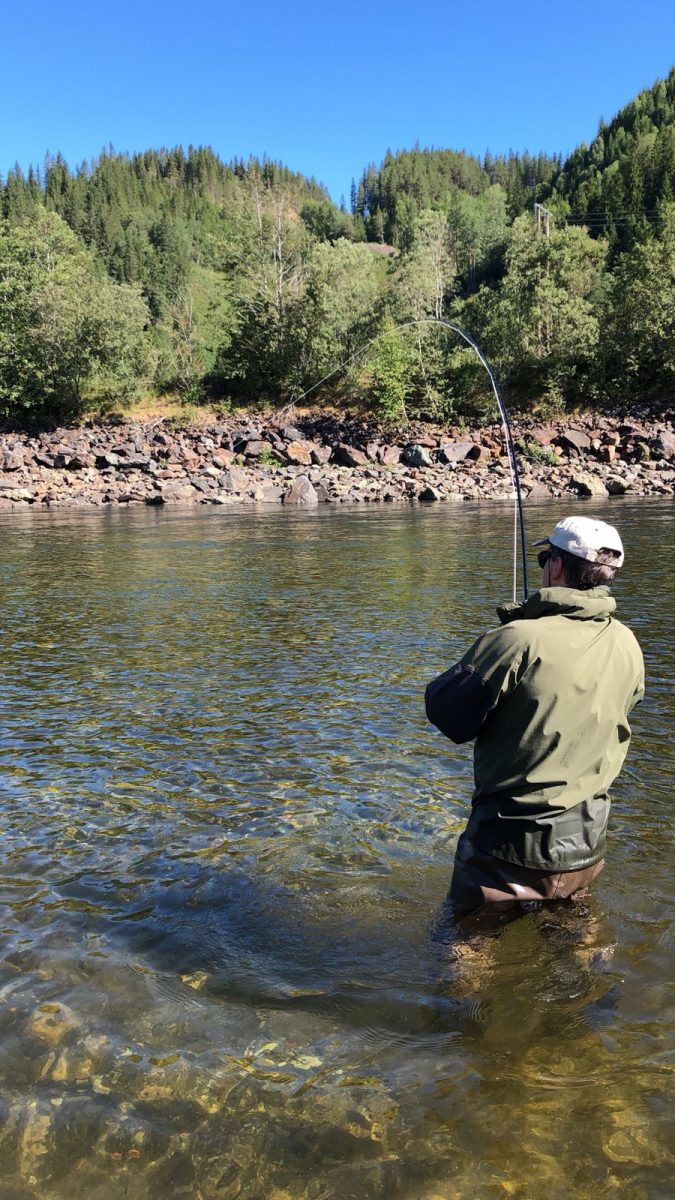 Christophe is into his salmon on Beat C2. 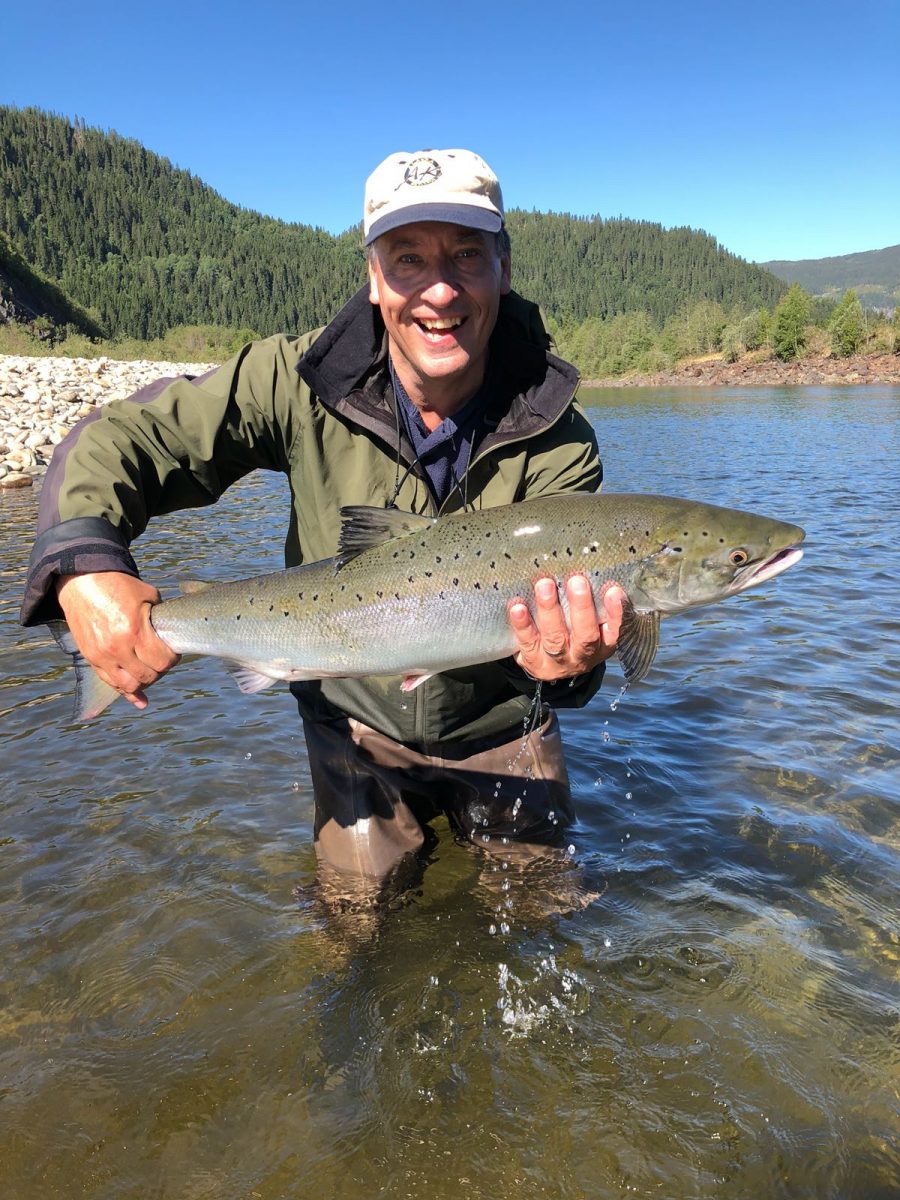 Christophe with his salmon from Beat C2 – after losing the first fish he was able to land this one!

A little bit later during the day Christophe fished the head of our Lodge Pool and was able to catch his 2nd fish – a beautiful female salmon of about 8kg (17.5lb). 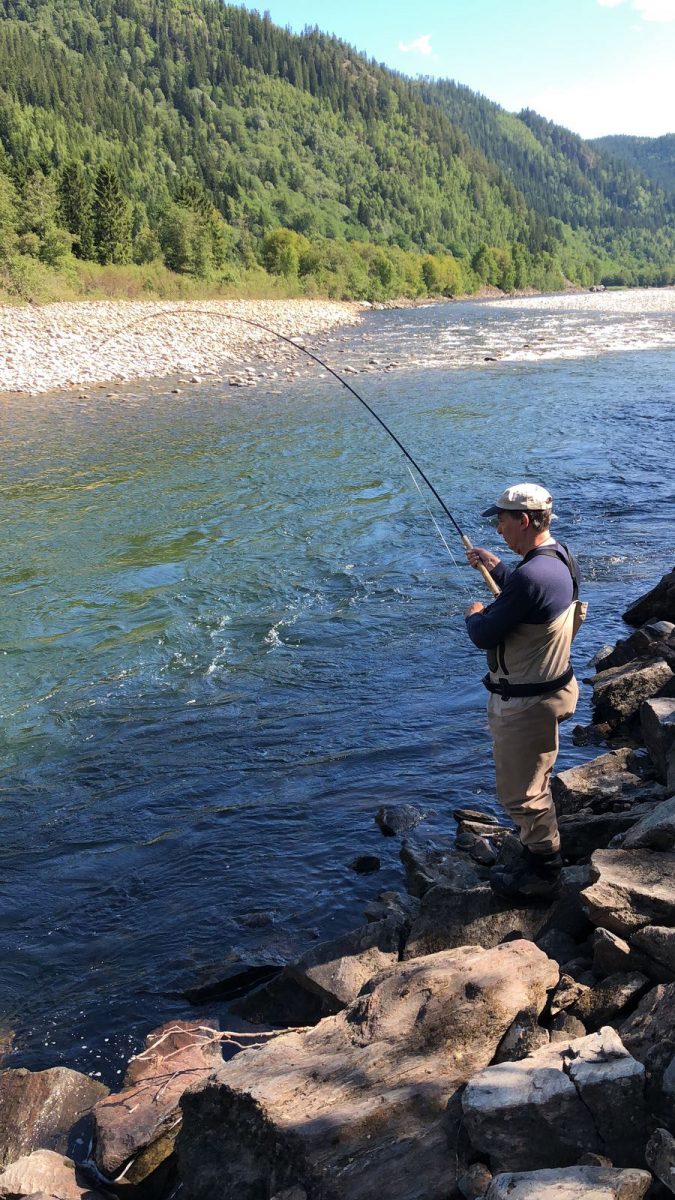 Christophe fighting his next salmon. 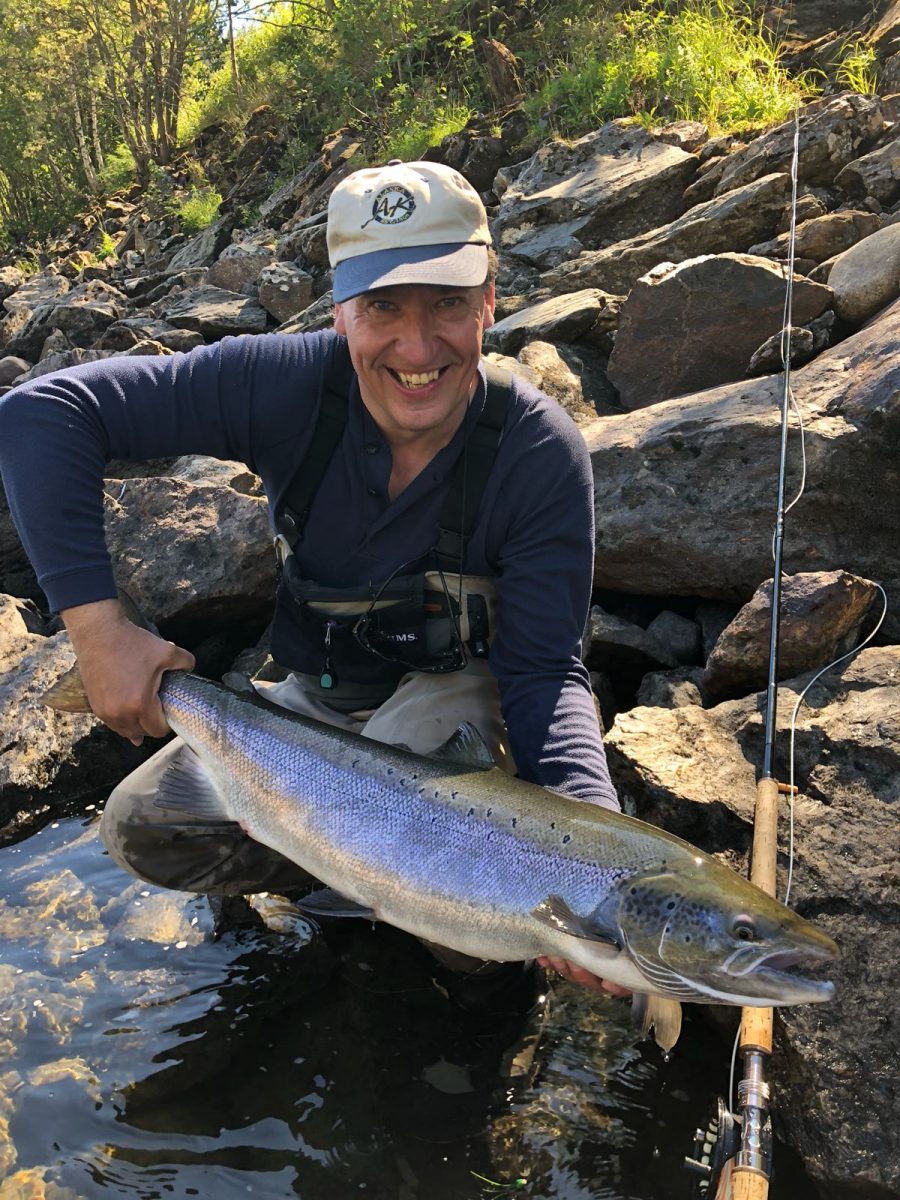 A happy fisherman with a very nice salmon! 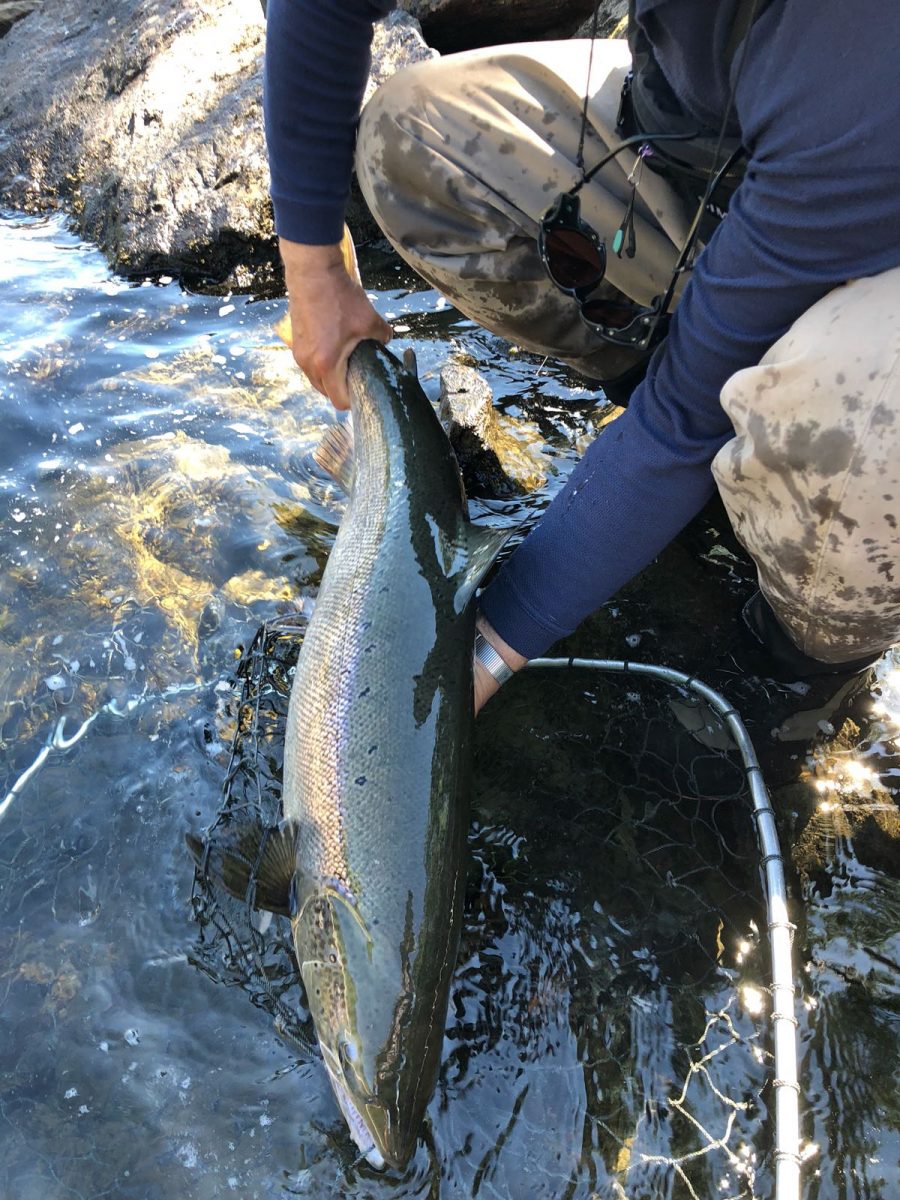 This salmon is just about to get released to keep on running up river! Well done, Christophe!

American guest Bob Consiglio landed his first Gaula salmon on Beat E2, weighing about 3kg (7lb) as well as Fabien Laborde from France who had a great session on our Beat C1, he was able to catch and release good seatrout and two salmon of 4 (9lb) and 8kg (17.5lb)!

Then it was Georg Weiner who fished together with his family on our Beat C2. After a short while he hooked into a good fish and shortly after was able to release a superb fish of 91cm. 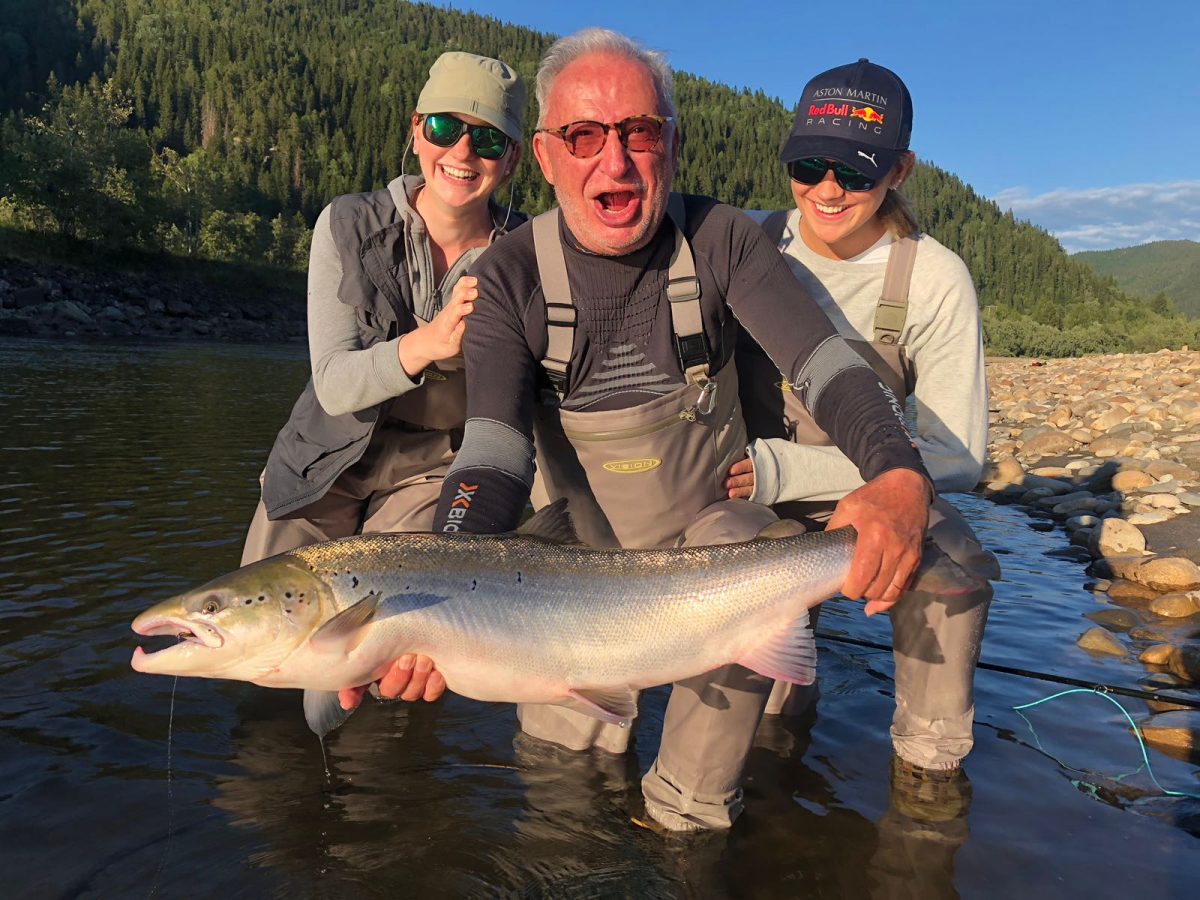 Georg with his two daughters Celine and Coco and his salmon from Beat C2. Well done!

Next it was regular guest, and NFC friend, Fabrice Bergues who was succesfull on Beat D2 with the hitch method. This low water gives the opportunity to try different styles of fishing and there is nothing more exiting than to see salmon taking the fly from the surface! 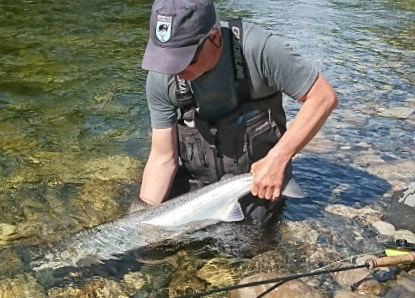 The next two days were very slow due to super low water conditions- below 10 cubic again, but luckily som rain showers helped the river to rise again and towards the end of the week fishing improved once again. Alvaro Santillan was fishing the Bua bridge pool (tributary of the Gaula) and had serious action on the single handed rod. After an exciting fight, following the fish through some rapids he was able to land a beautiful salmon of 90cm, with the help of Fabric. 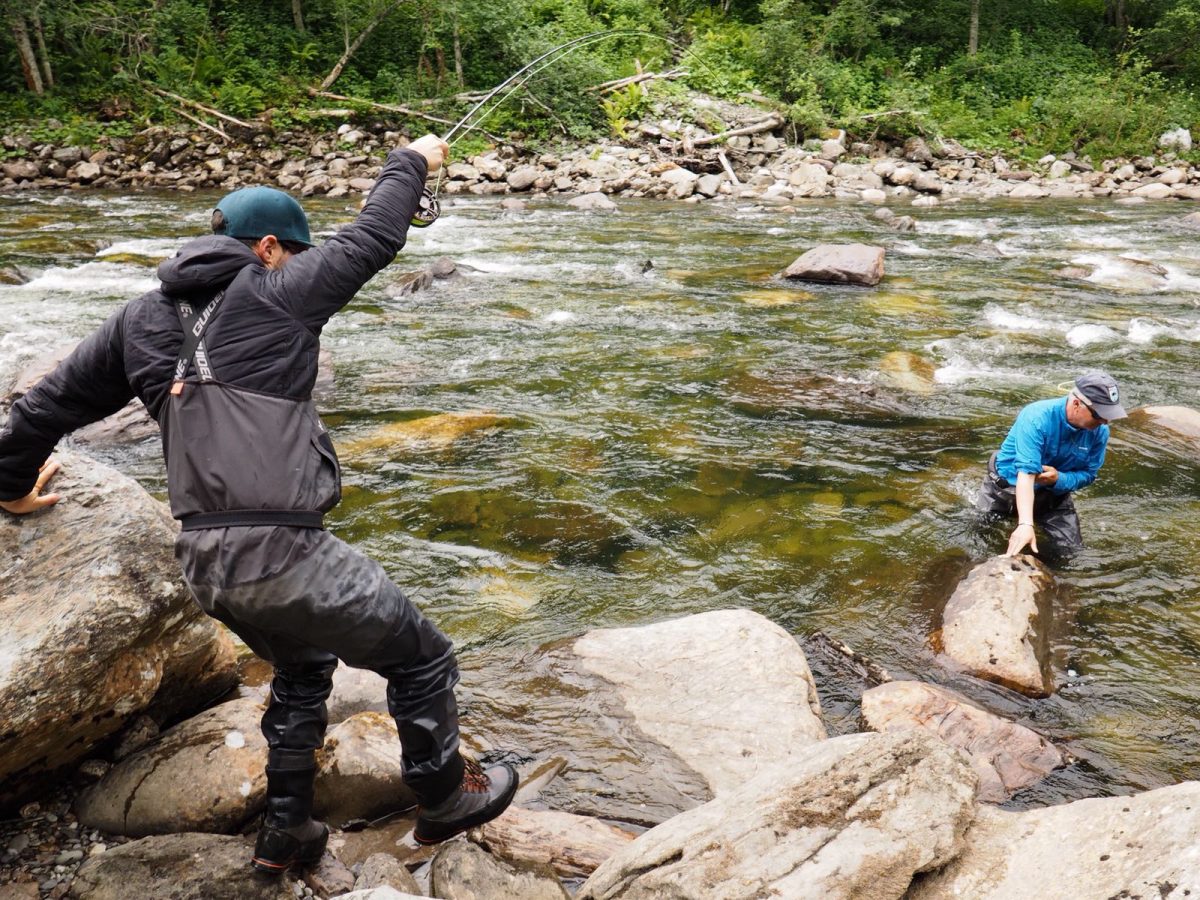 Alvaro fighting and Fabrice trying to help landing the salmon! 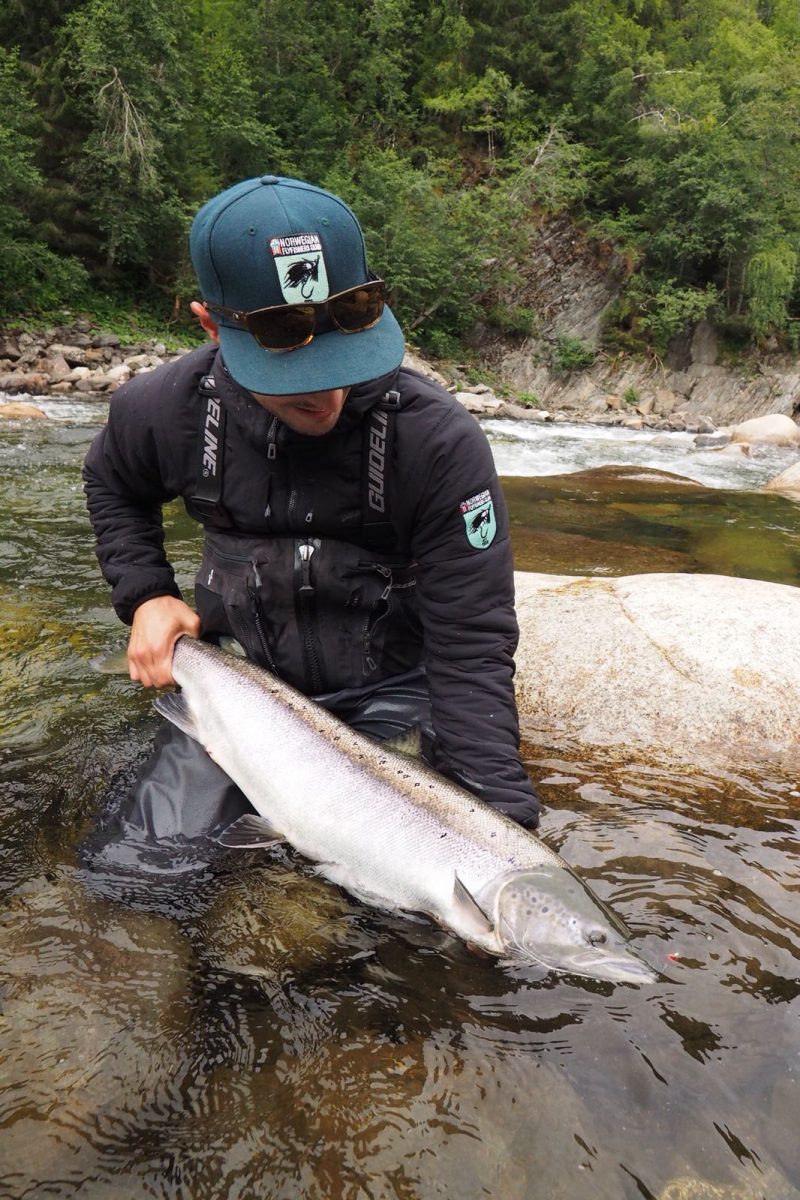 What a great fish from that small river! 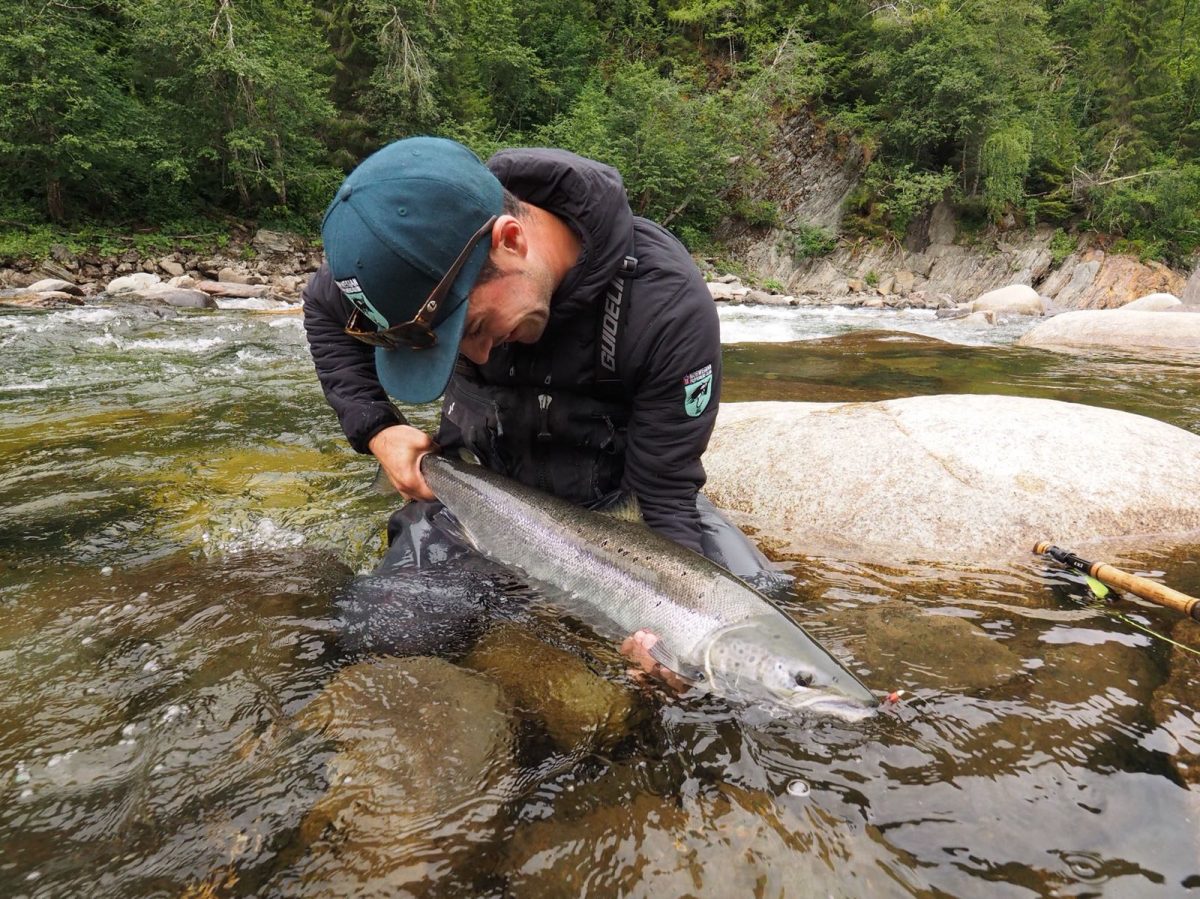 Such a great scenery to catch fish of that size! The Bua is always worth a try!

That same day Celine was able to catch and release her first Gaula salmon. After losing her first salmon after a short occasion she managed to land the 2nd one – congratulation! 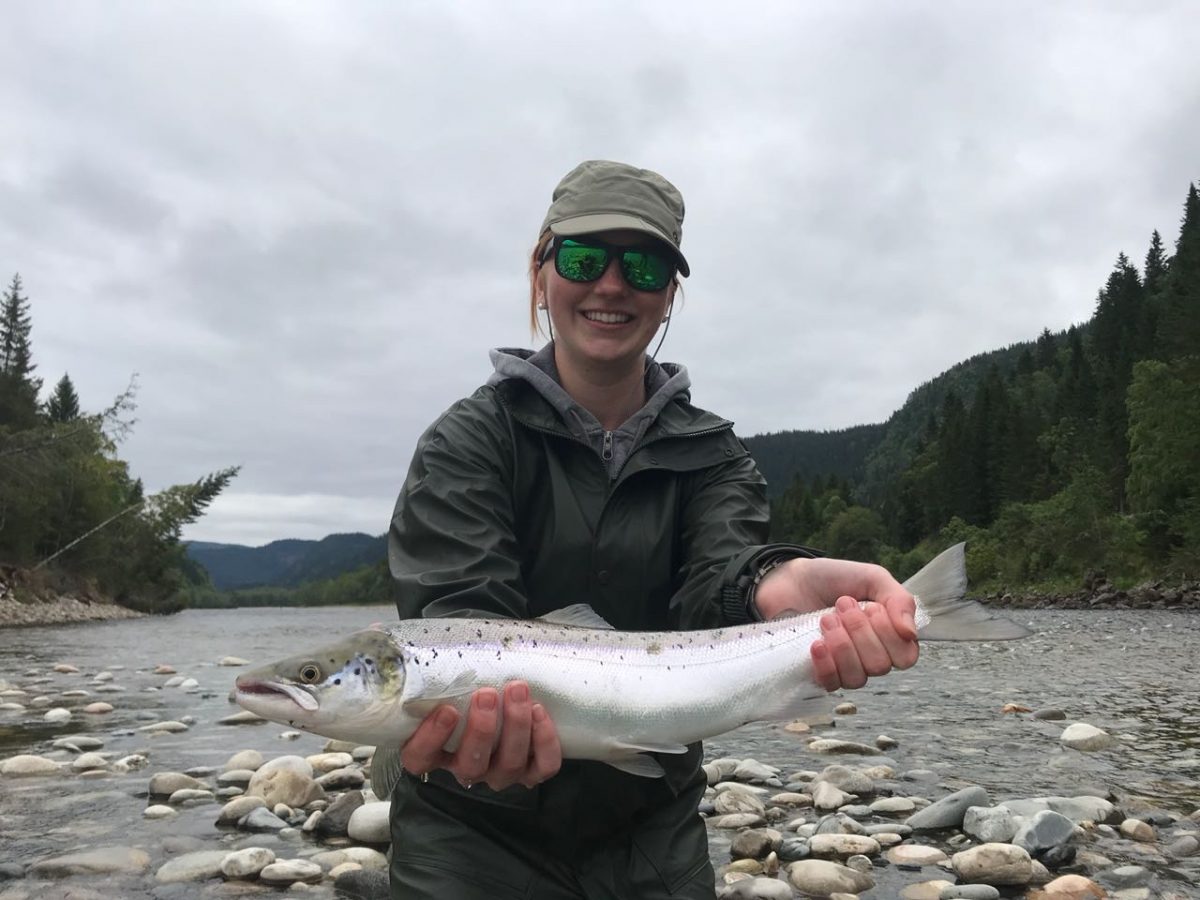 Celine with her first salmon, caught on Beat G1.

Also her brother George Weiner was able to catch and release his first salmon ever on the 3rd cast of the day! Good to see young fishermen getting into the sport! 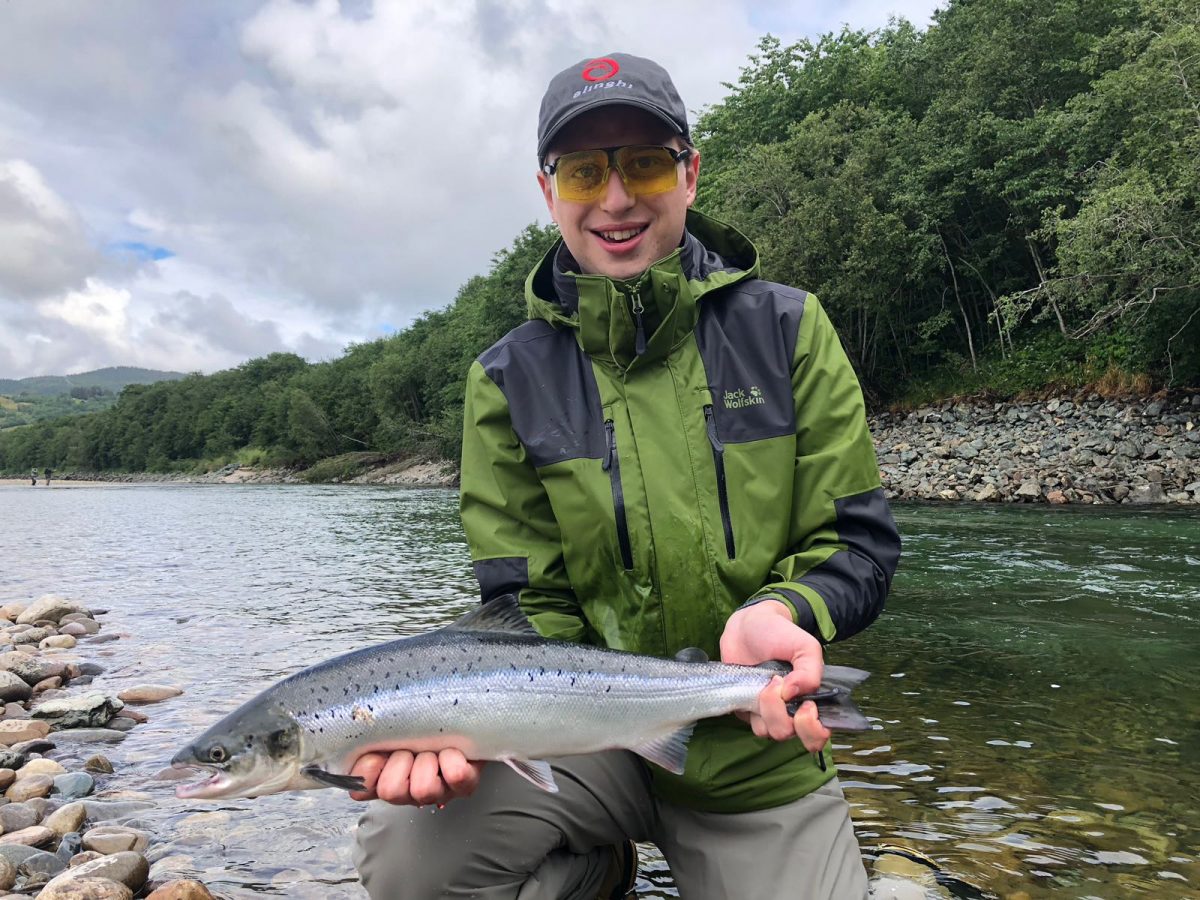 George with his fish from Beat E1a  – Well done!

A few more fish including a 4kg (lb) salmon on Beat BS1 and a couple more seatrout and grilse were caught during the week, but on the last evening it was Jean-Luc Pouillen who ended his week with a superb salmon of 9kg (20b) from Beat G1. After fishing hard for the whole week, a great reward! 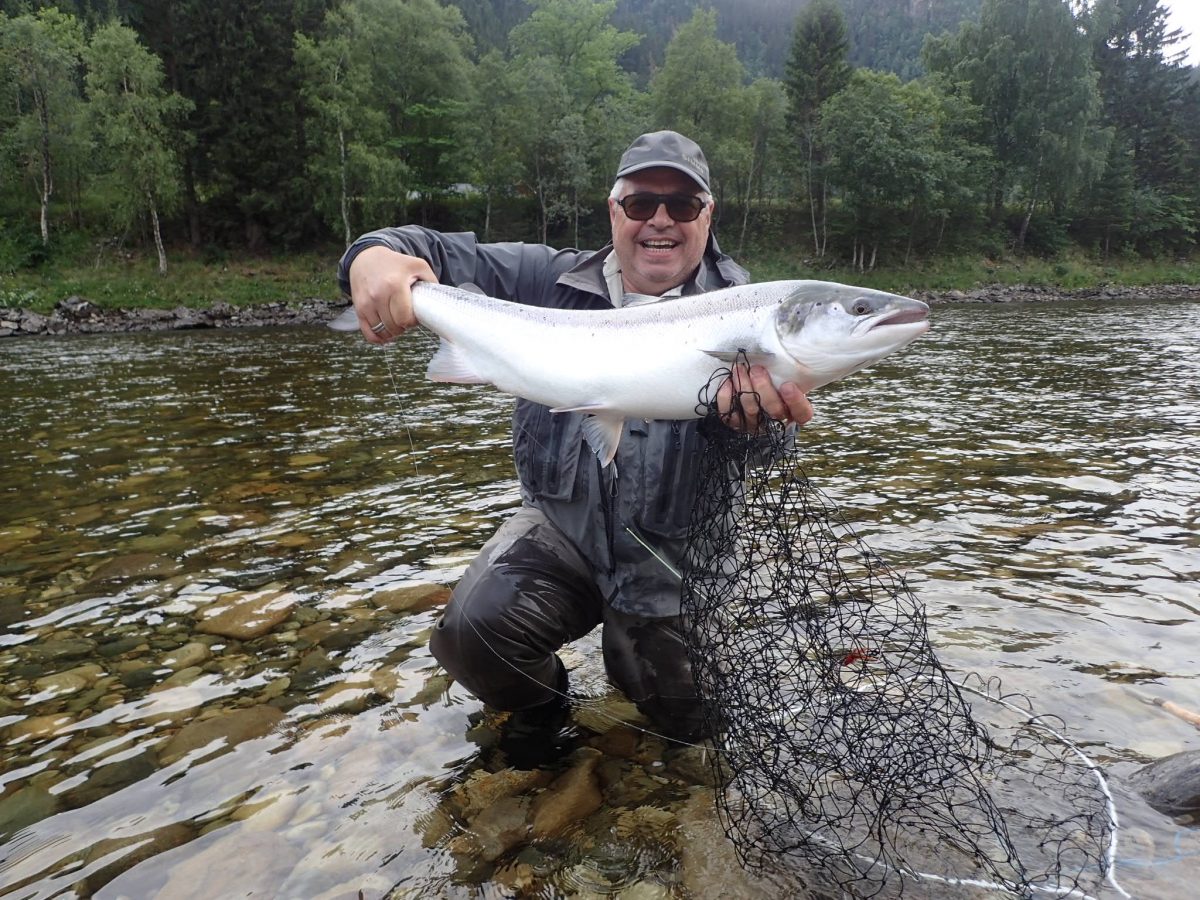 Jean-Luc with is beautiful salmon from Beat G1 – super fresh!

Philippe Köhler from France caught a nice salmon on Beat E3 of 83cm, as well on the hitch, as did catch Julien Sindou who landed another “hitched salmon” of 65cm.  Of course the week had to end with more fish for Alvaro – during the last night and Sunday morning he managed to land two more salmon. Another great fish of 88cm on our Lodge Beat and good grilse on Beat C1. 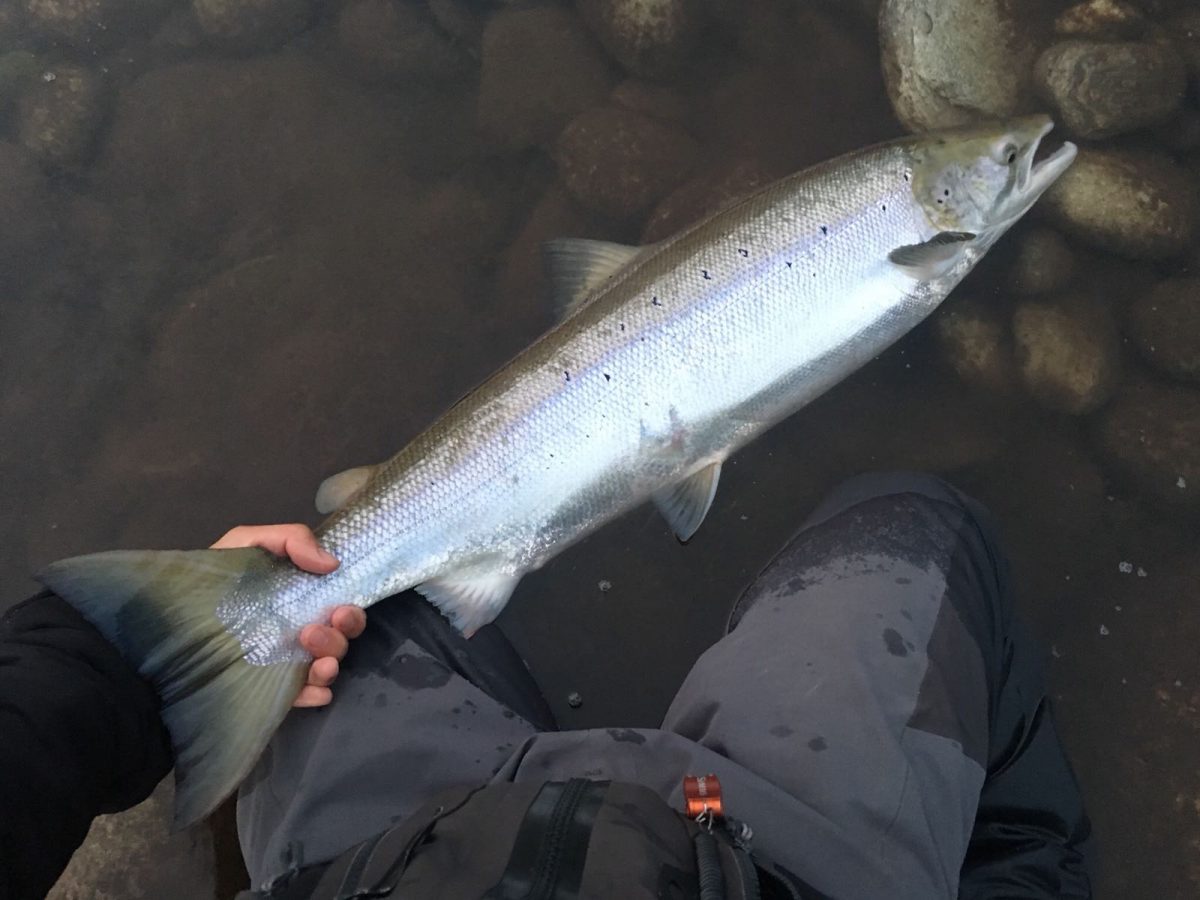 Alvaro with his 88cm from the night at the Lodge. 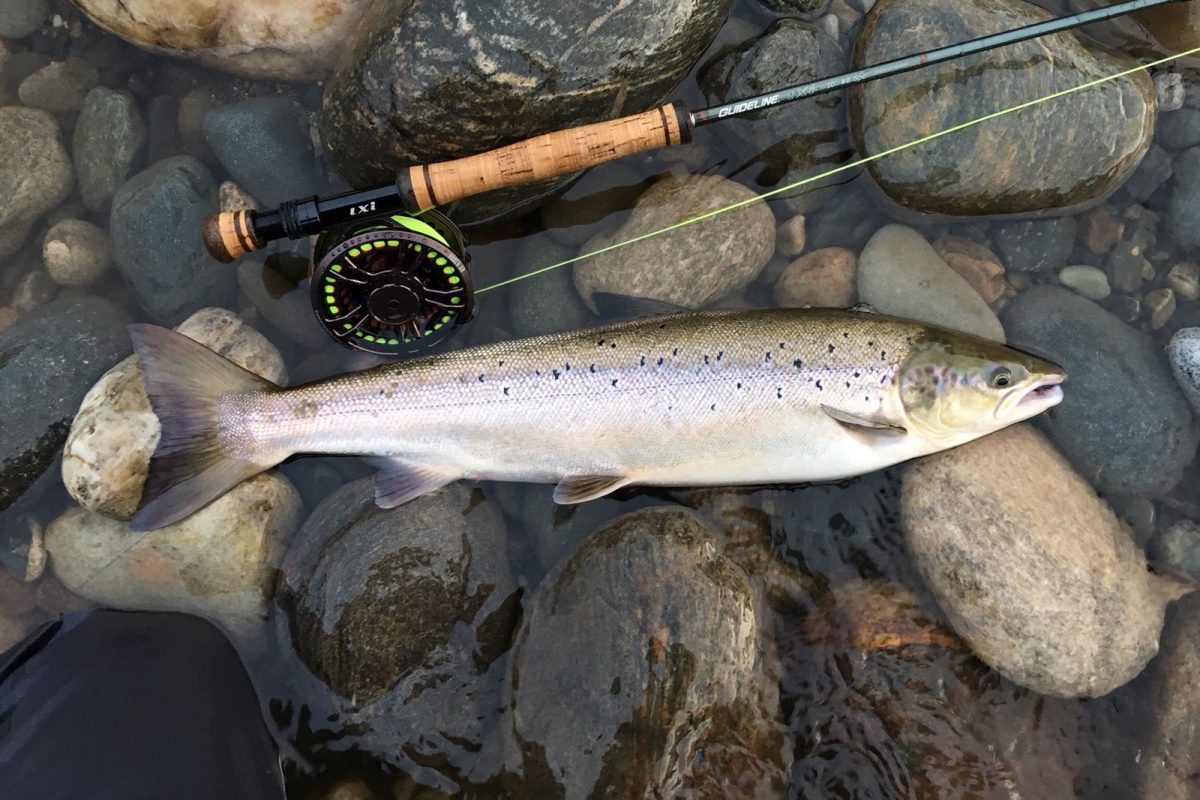 A 60cm grilse on the single handed rod on Beat C1 – those fish on light gear a big fun!

The weather on the Gaula and in most regions of Norway is still hot and way too warm, but that is nature and we have to try to make the best out of the low water situation. For being that low the river fishes still surprisingly well – in other season we would call it “hopeless” conditions but this season shows, even when its “deadly low”, there is always a chance and even to catch nice sized fish! We only could imagine how good this season would have been with a bit more water, but who knows, it might come and we could get great late season fishing on the Gaula…time will tell!