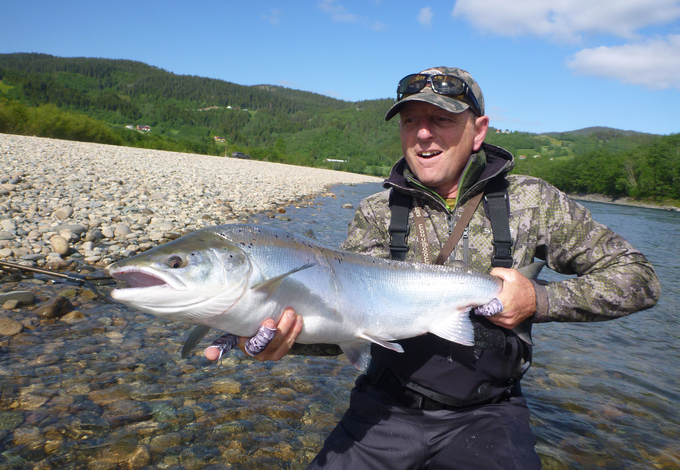 Week 22: The fishing on the Gaula is on fire!

The conditions right now are perfect! The water is constantly dropping, the water temperature is already about 9 °C and the fishing right now on the lower Gaula is very good. The fish seem to be coming in groups, so it’s a matter of being in the right place at the right time, but if you hit it – your “salmon heaven” awaits!

During the early morning hours of the 4th of June our Norwegian guest Tom Lillevik fished on E2 and spotted some fish moving. After only 2 casts he hooked into a good fish, a few minutes later he landed his first salmon – a good fish of about 7,5kg. 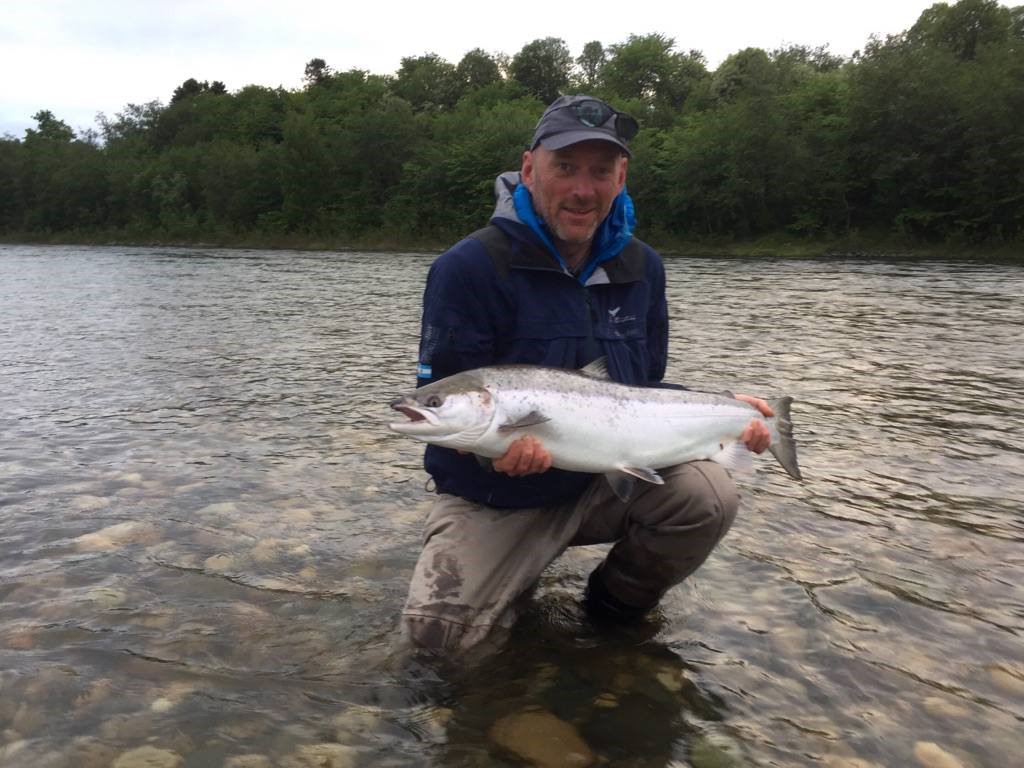 Tom Lillevik and his nice salmon from Beat E2.

Later the same morning our Italian guest Giulio Righini found his luck again, and landed his 3rd fish of the trip! The salmon was caught on Beat E1. Again a fish around 9kg – Giulio really had some fantastic days on his first visit on the Gaula. 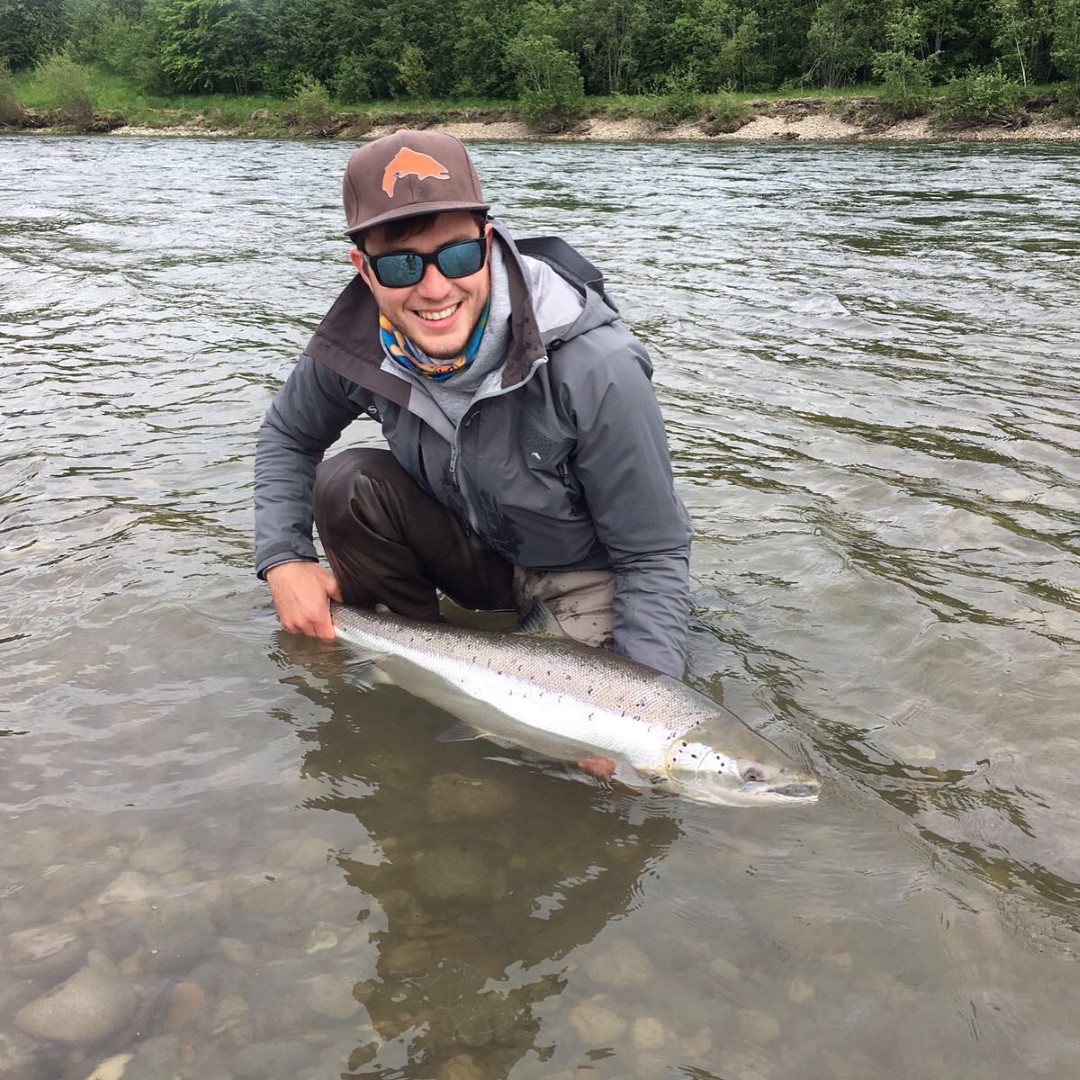 Giulio with his 3rd salmon – 9kg

In the afternoon, our newly arrived French guests Cyrille Borro and Laurent Galliot had our new Beat E7 on the rotation schedule. The Beat seems to fish better and better as the river drops, and they each landed a fantastic salmon! Cyrille’s fish was a fantastic fish measuring 110cm, Laurent’s fish measured 100cm –a really well-conditioned fish! 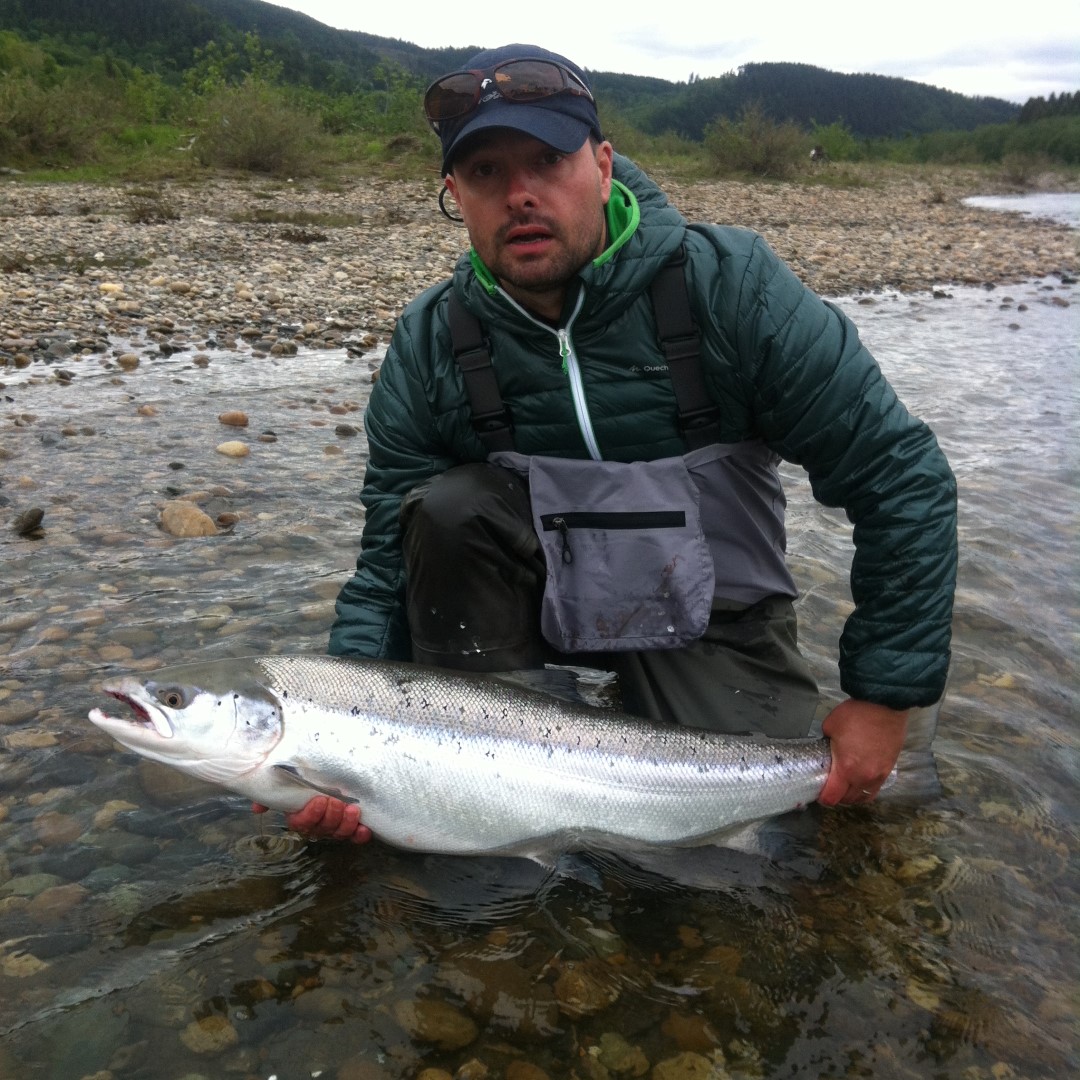 Cyrille Borro with his big salmon from Beat E7. 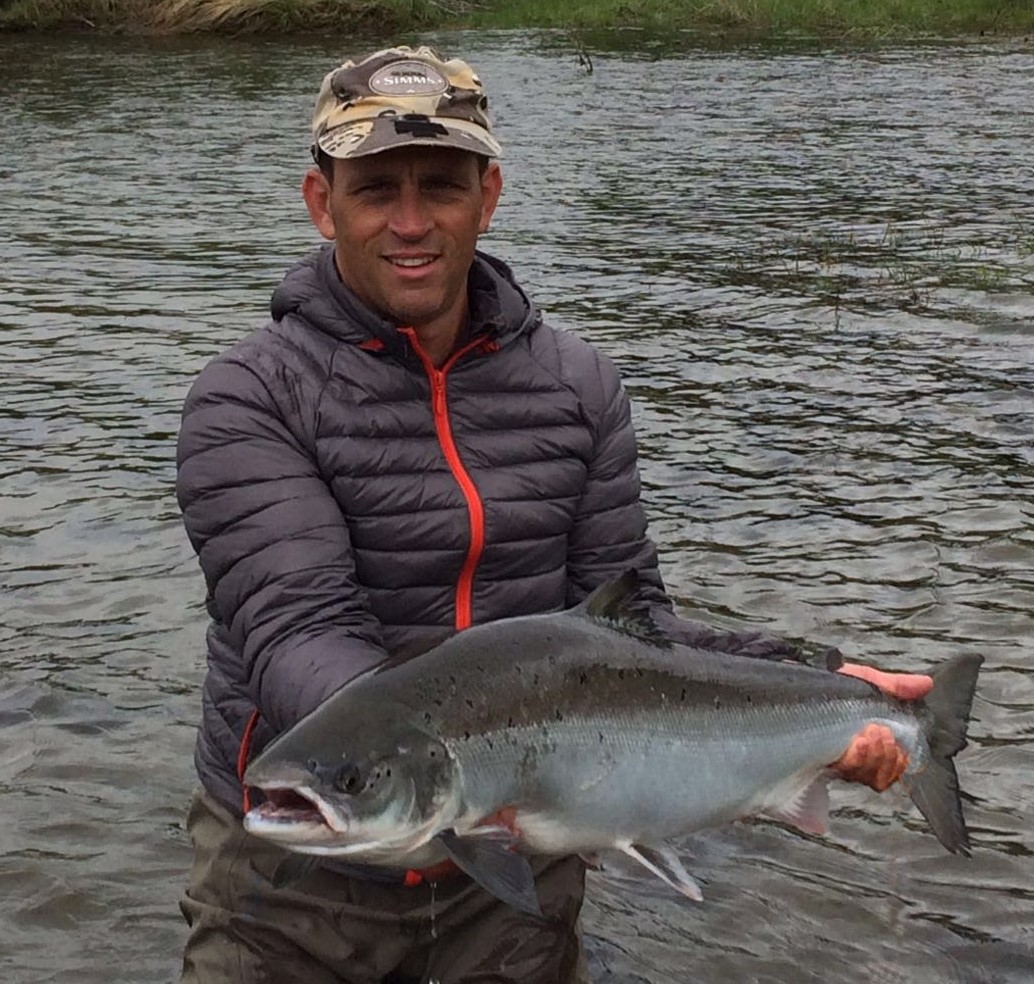 Laurent with his first Gaula salmon – these June fish are simply beautiful!

During the afternoon several more fish were seen moving but nobody hooked a fish. But already the next morning would be a fantastic start to the salmon season for Orazio Gatti who arrived late the night before. Orazio fished together with his guide Alessio Farloni on Beat E2. Within 1 hour of fishing he landed two great fish – the first fish was a nice salmon of about 7kg and the 2nd fish was way bigger, even if the photo does not really show the real size of that fish – Orazio’s salmon measured 112cm, quite a big fish! 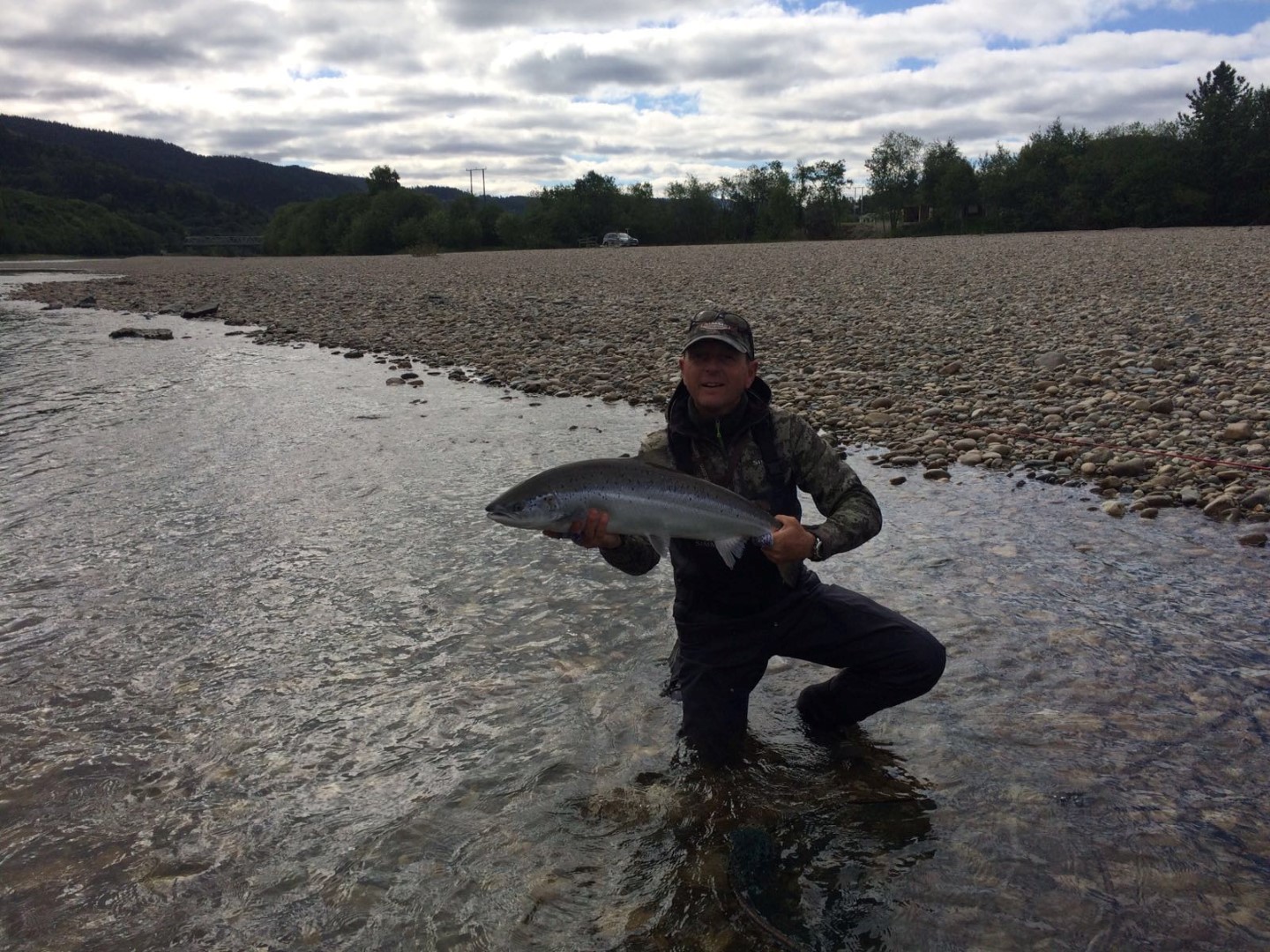 A big fish and once more a happy Italian this summer – congrats Orazio!

Orazio is releasing is big fish back into the Gaula.

But the day wasn’t over yet- in fact- it would get even better! During the afternoon, our French group fishing with us this week hooked 4 salmon and landed 3 of them on Beat E1 – all good fish between 8 and 10 kg! 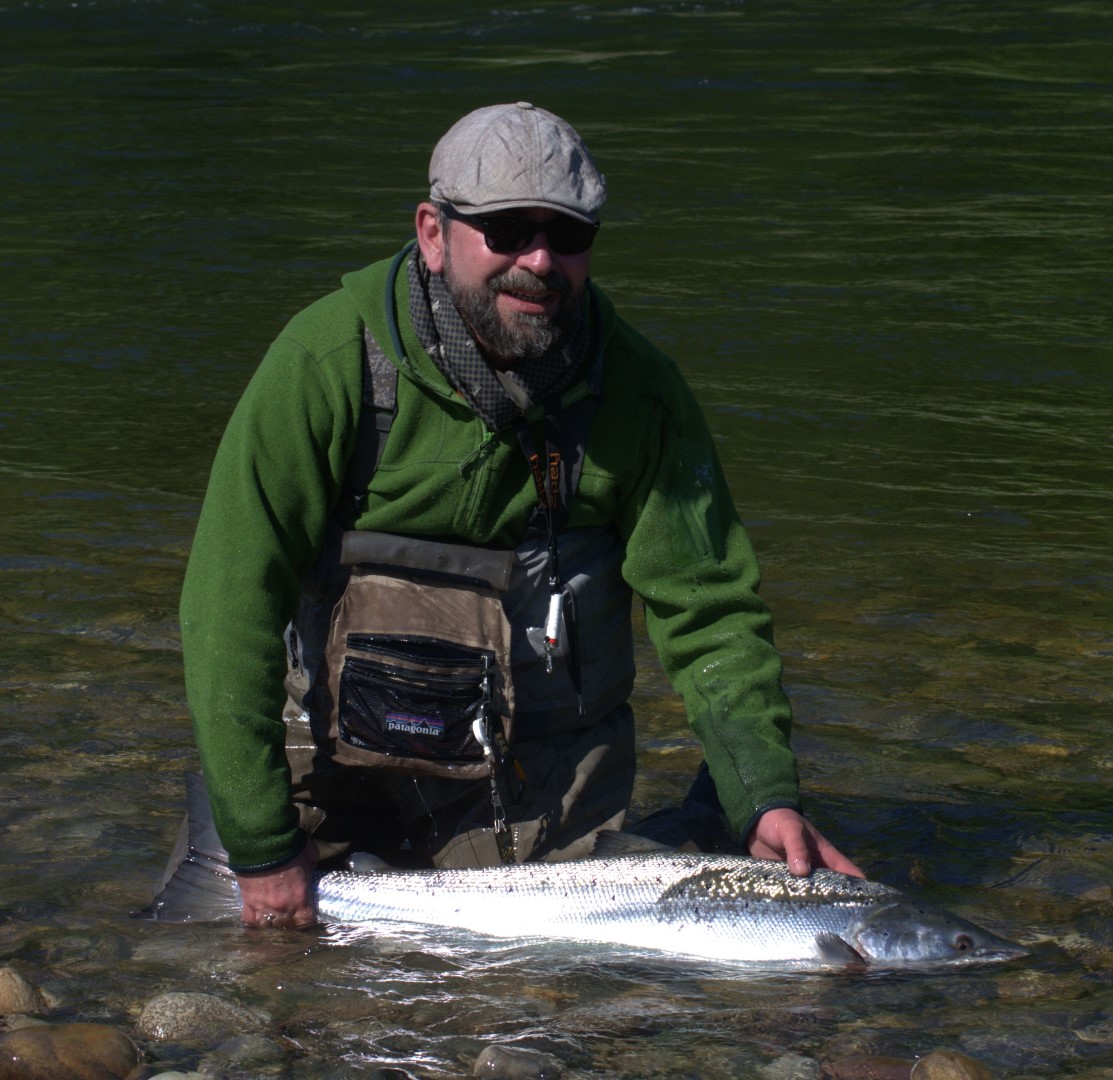 Bernard with his nice salmon of appr. 10kg. 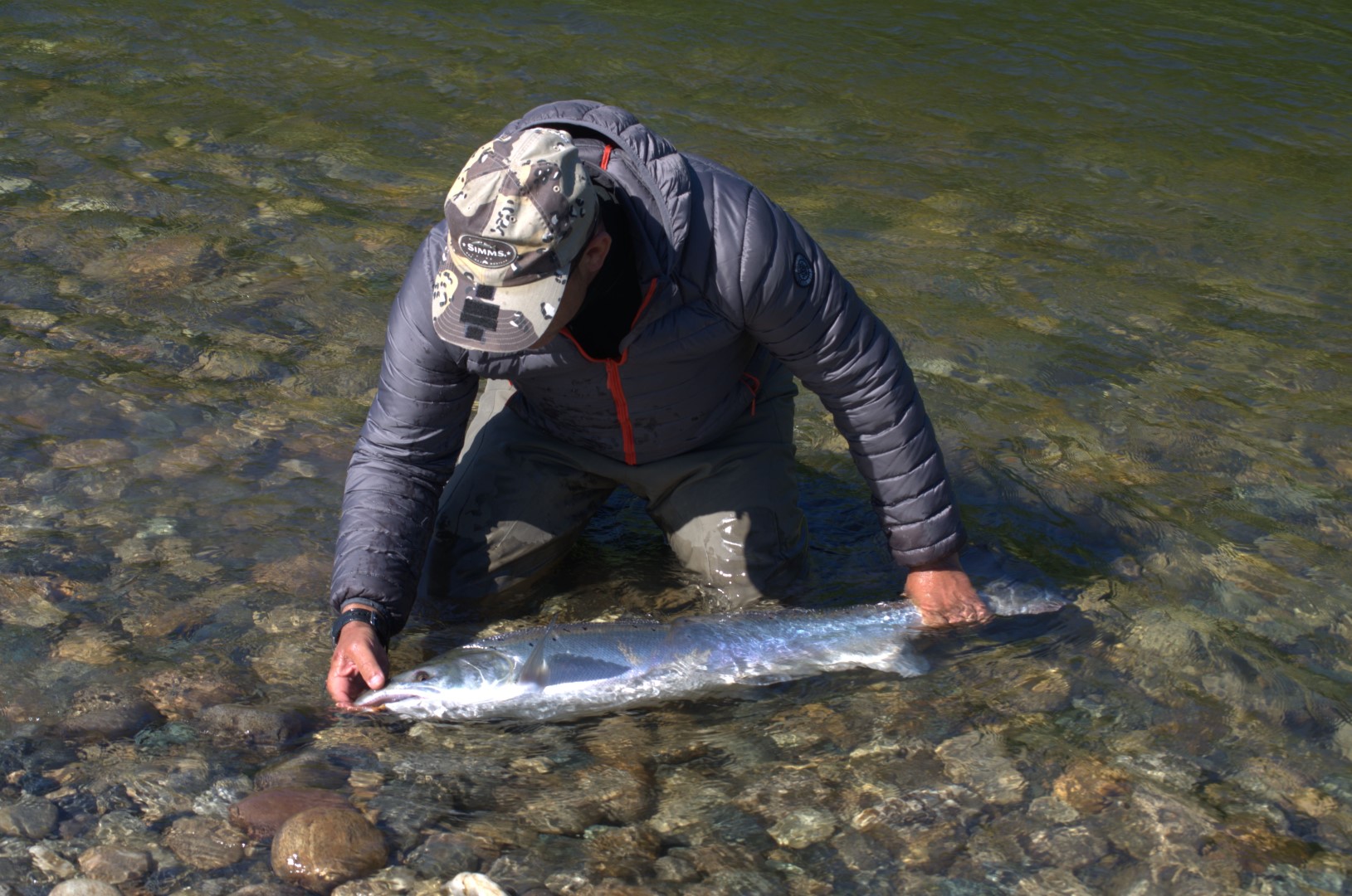 Laurent and his 2nd fish, another fat fish of about 10kg and 100cm. 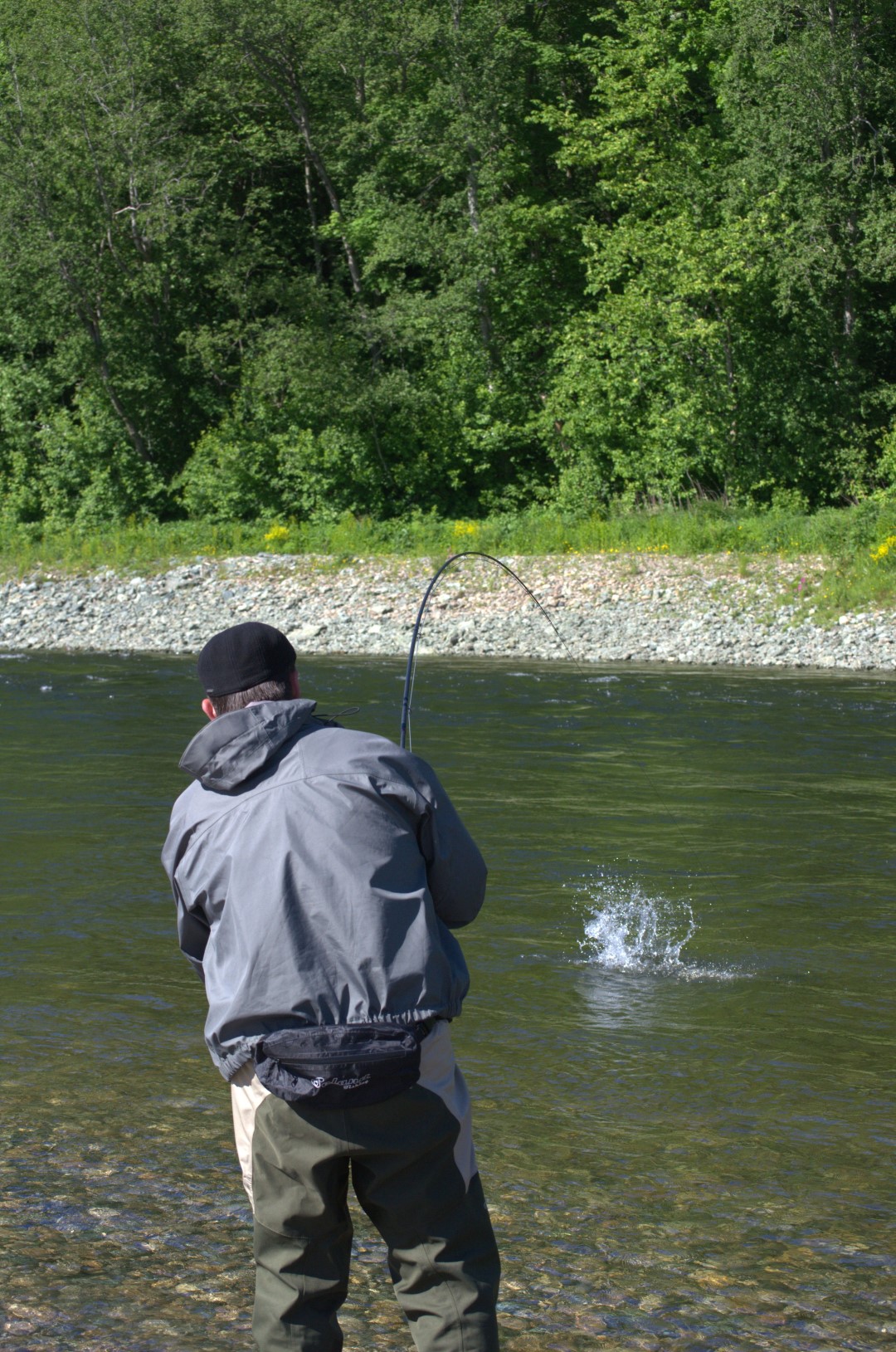 Yann is into a good fish on E1. 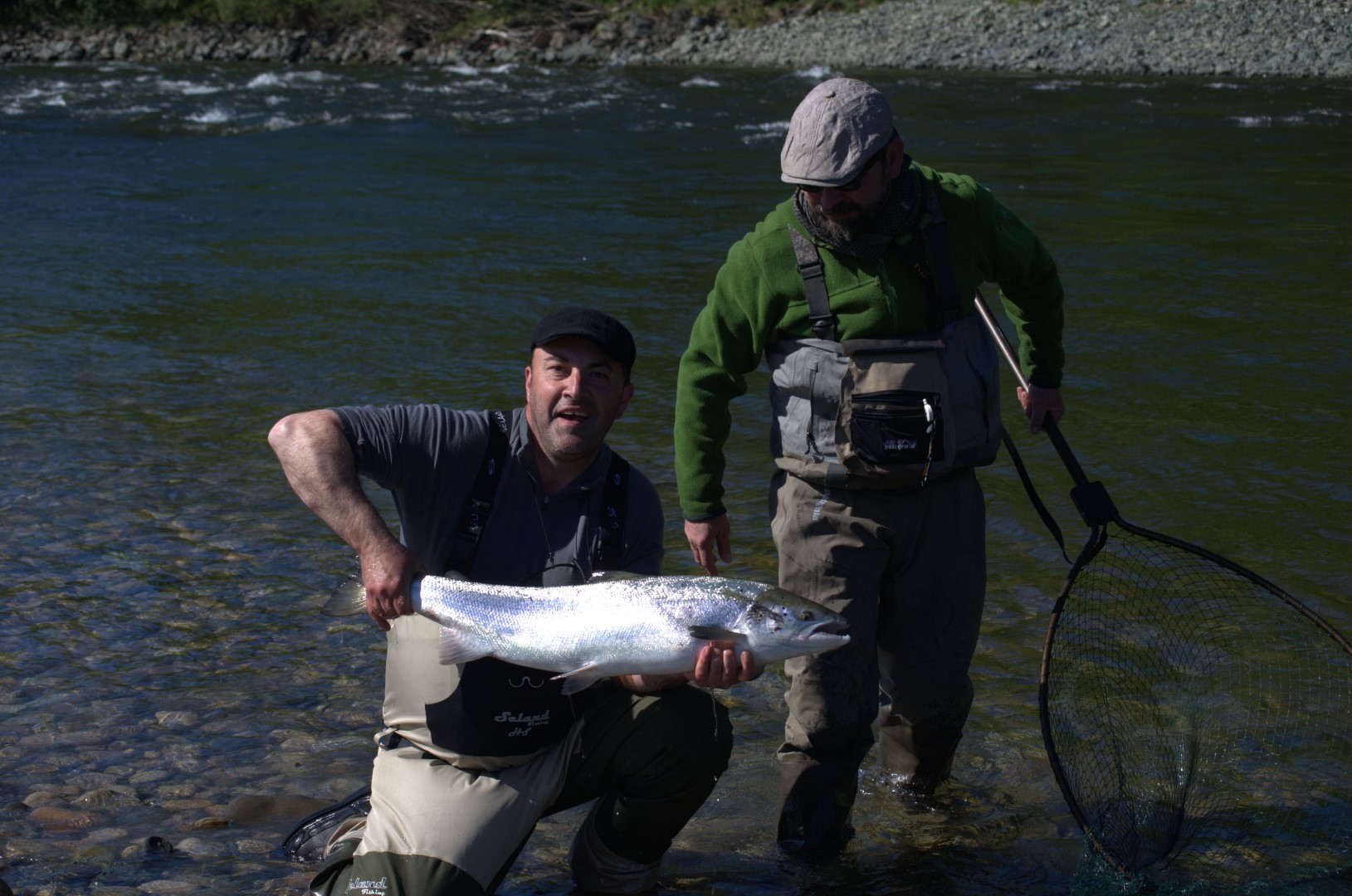 Yann Russon and his nice fish from the lower Gaula weighing approx. 8kg.

We are glad that most of our fish could be released so far, as in the early season sometimes the salmon take flies very aggressively and they get hooked deep – but so far we have only had 2 fish bleeding which had to be kept. As much as we promote catch & release, it sadly is not always possible to release a fish unharmed.

The fishing seems to be improving day by day now and if it continues like this we are expecting some great fishing weeks ahead! The river has now dropped down to a level of 105kbm on the Gaulfossen gauge – which means fish are able to run constantly through the Gaulfossen rapids and while we are writing this report the first salmon above the Gaulfossen rapids has been landed just below our Beats in Støren! They are up here now! We are very lucky to have the honour to spend our summer on such a great salmon river – and if the fishing is great, there is not much more that could be better in life.

We are looking forward to the days to come – let’s see what surprises the Gaula offers our fishermen during the next few days – hopefully the “golden river” will keep on delivering heavy silver – fingers crossed!!

P.S We still have some select few rods available, but they are filling up fast! So if you are interested in coming, even in the next few days, on short notice, please get in touch!