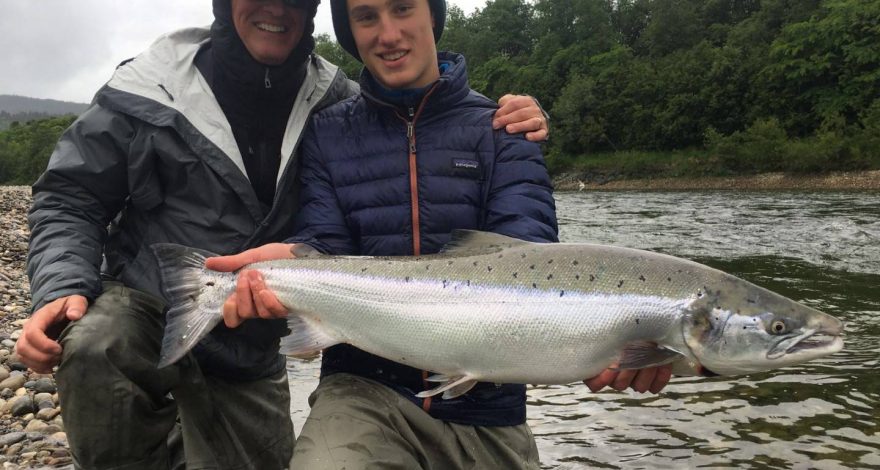 The week started off with a water level of about 60kbm at Gaulfossen, which we consider to be a regular summer water level, but is quite low for this time of the season. But this water level is great for most of our pools and fish are spread out, which means you have a good chance to catch fish on any beat right now, which is great fun! The week started with a salmon on our E-Beats, caught by regular Austrian guest Franz Hochecker – a nice fish of about 11kg. 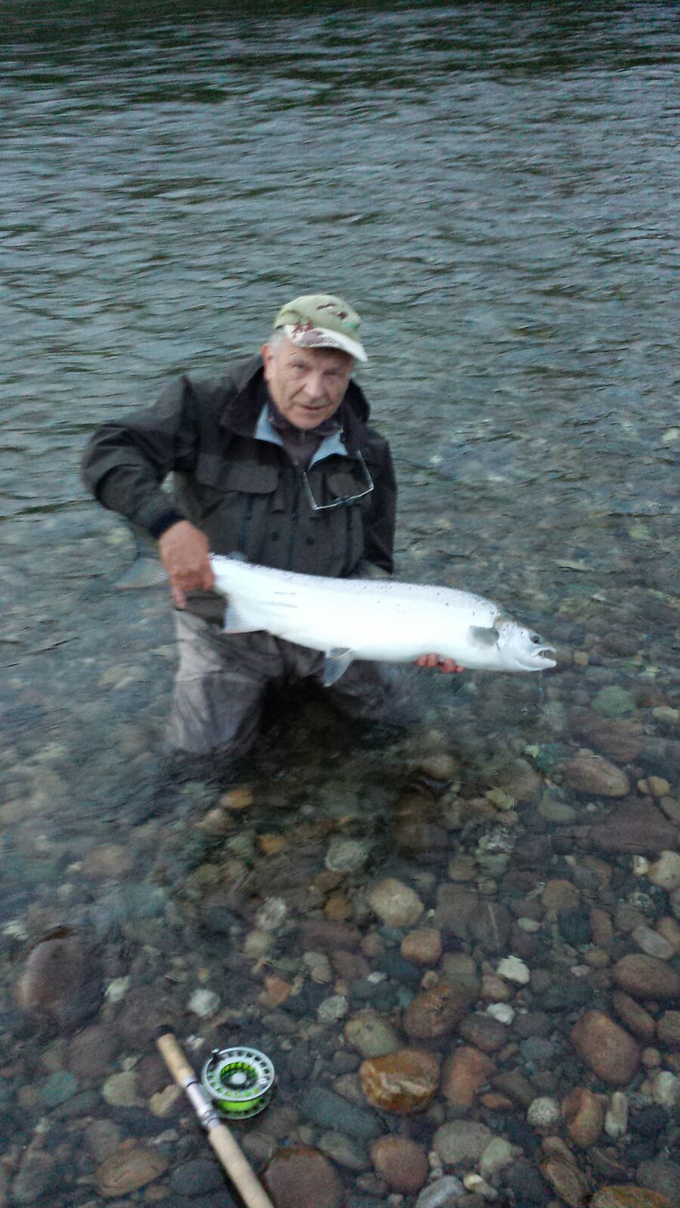 Also our Swedish guest Anders Tångring caught a fish more or less at the same time on our Beat BS2 which weighed approximately 7kg. 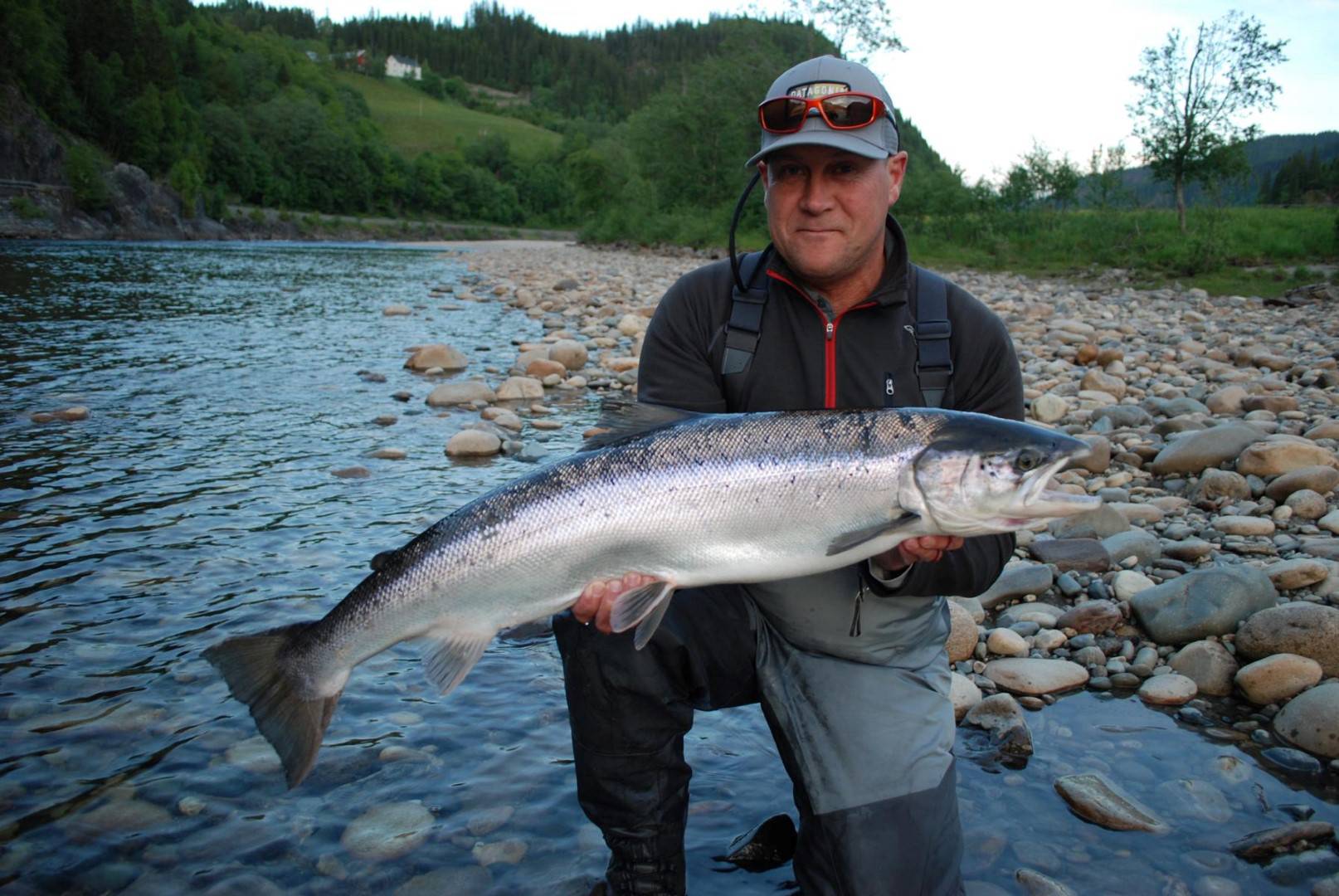 Anders with his salmon from Beat BS2.

On the next morning Daniel Persson got the first fish of the day on Beat BS1 – a nice fish of 9kg. 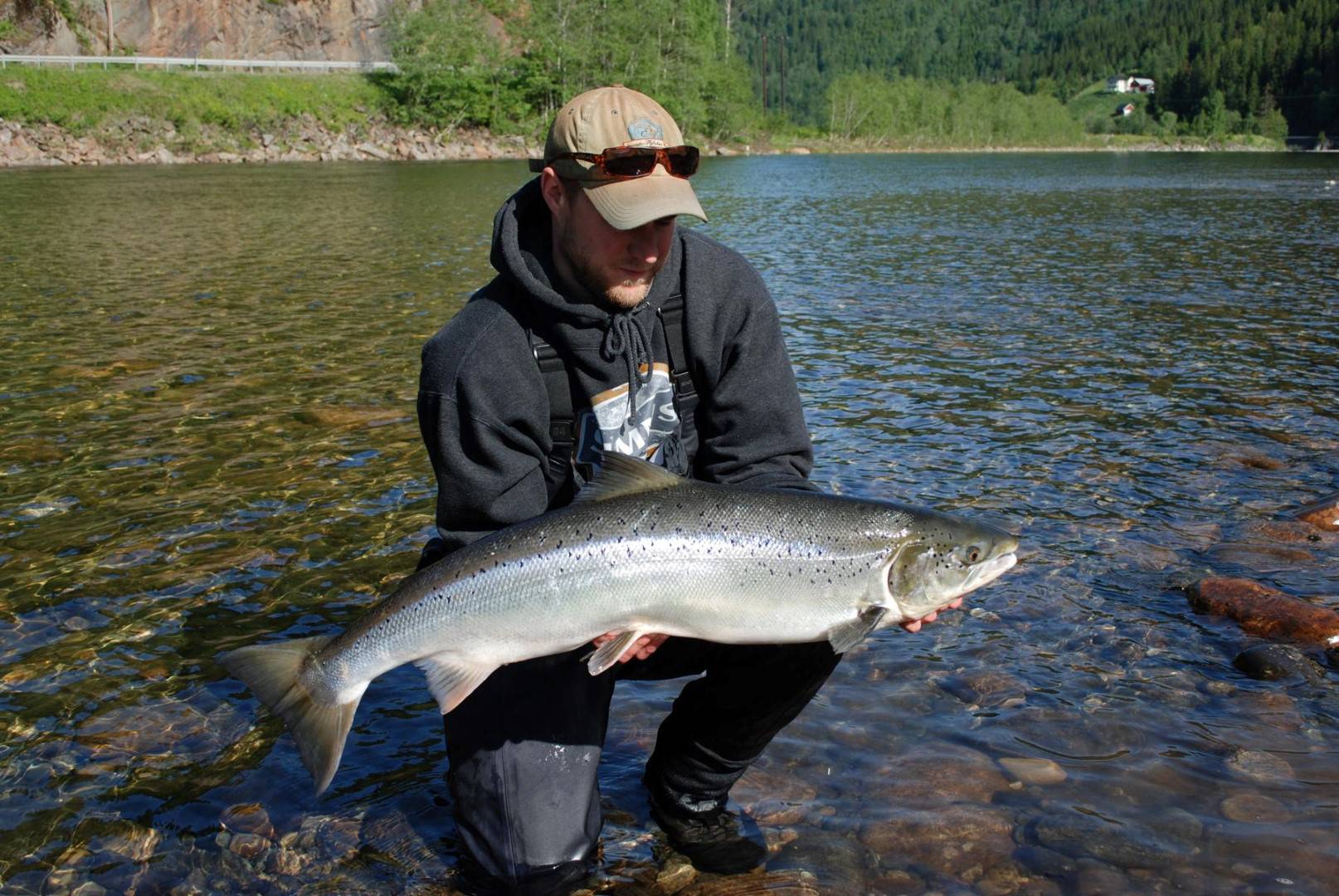 Daniel Persson with his first salmon of his week – a good start!

Also Manfred Raguse caught his next fish, this time in Tilseth Pool (Beat C2) weighing about 8kg. Rene Didssun was able to land a really nice fish on Beat D2, measuring 106cm and probably weigh 12kg. On the next day Rene went back on the very same place, and another good fish took the fly and he was able to land a fish measuring 105cm and estimated to weigh about 11kg. Sadly we have no pictures of these two great fish as Rene fished by himself and released them both.

Anders Tångring got is next fish in Langøy (B1), a medium sized fish measuring 83cm. He also foul hooked and landed a 15kg + fish…too bad the fish missed the fly! Shortly later NFC’s Daniel Stephan fished the same beat and landed his first fish of the season, a nice salmon to start the season. 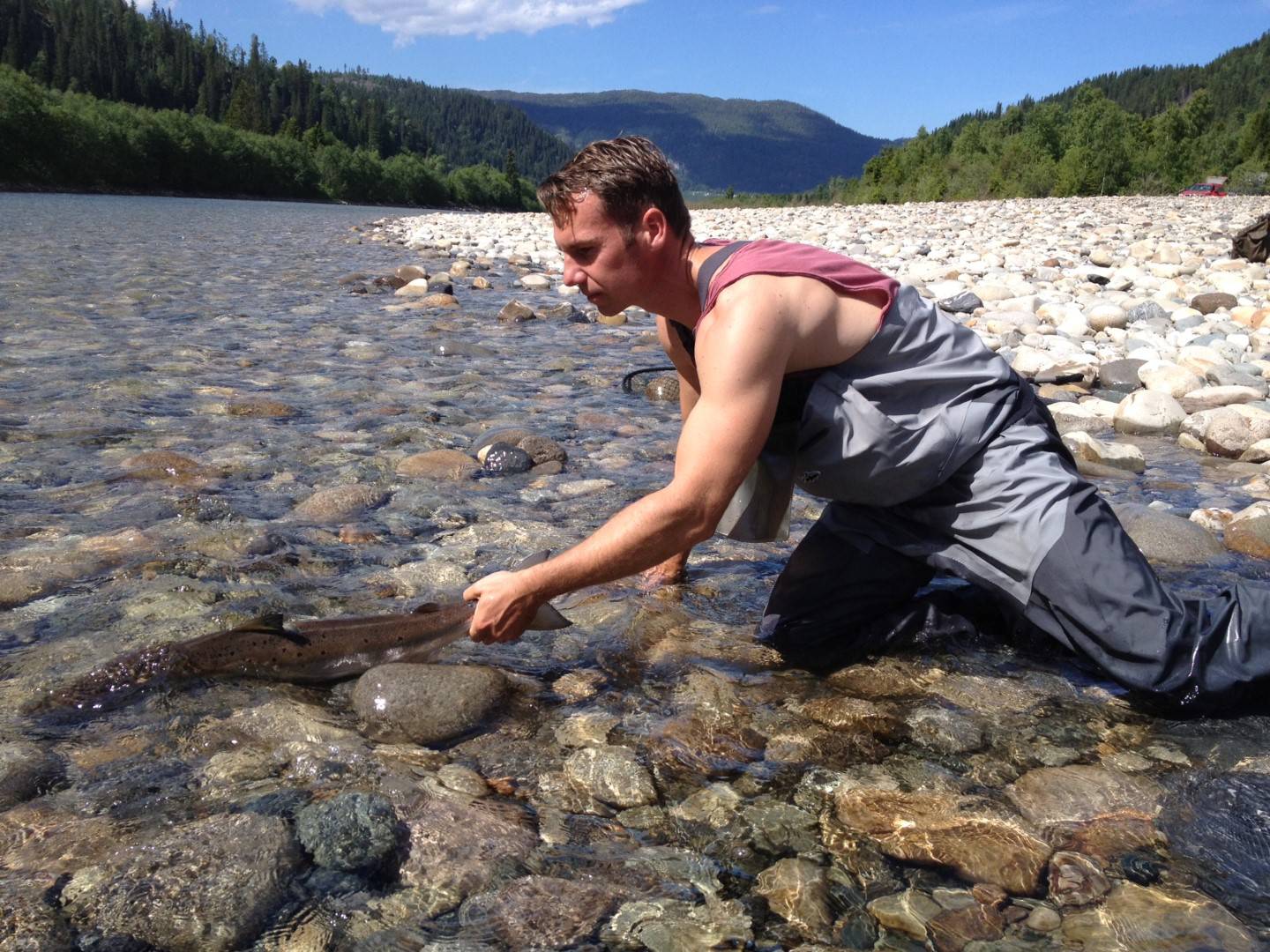 Daniel releasing Nr 1 for this summer.

Peter Ericson fished together with Daniel on Beat B1 and shortly after Daniel landed his fish, and had to head back to work, Peter hooked the next fish. Peter was able to land a superb salmon of about 10kg. 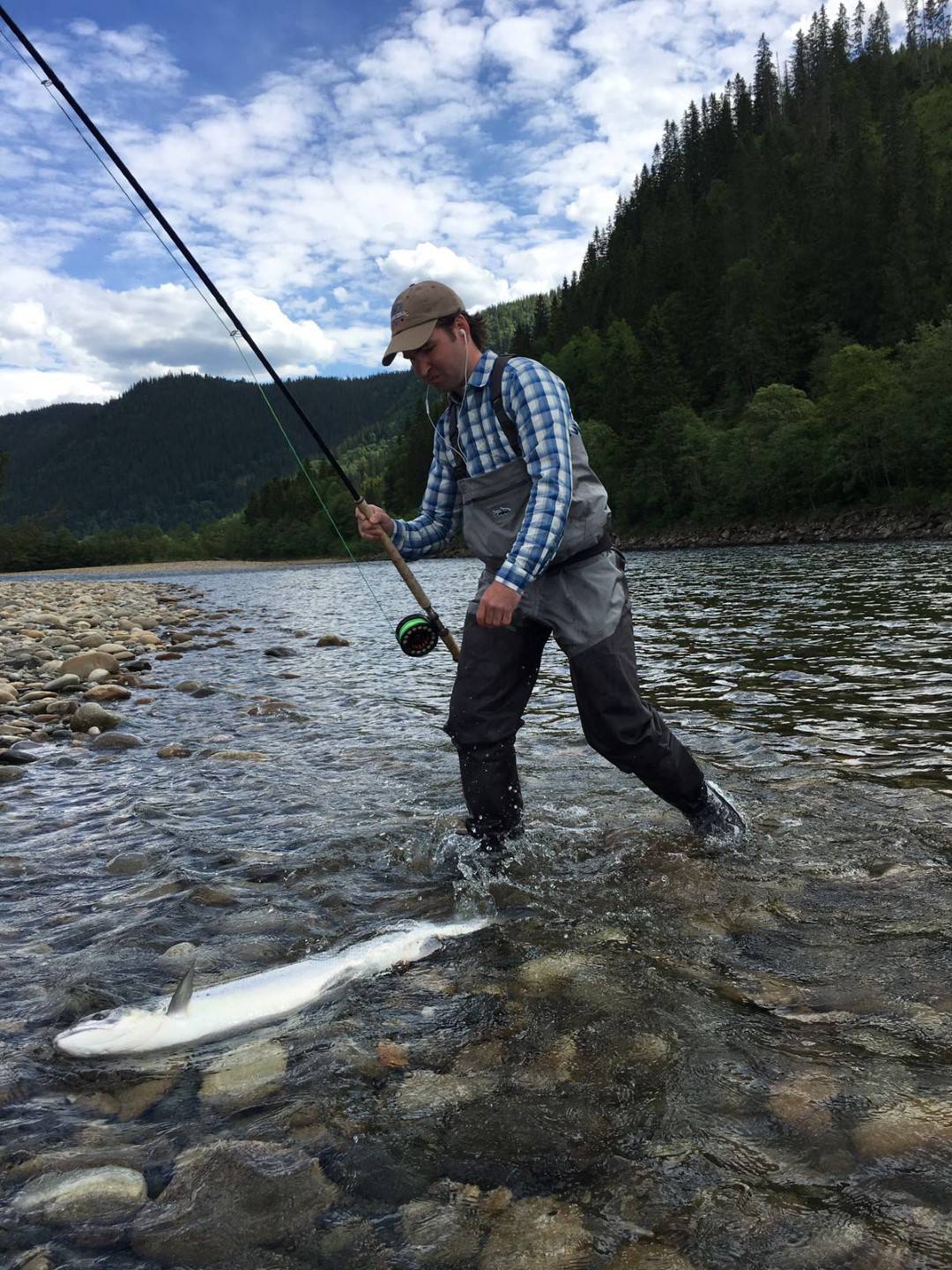 Peter landing his salmon on Beat B1. 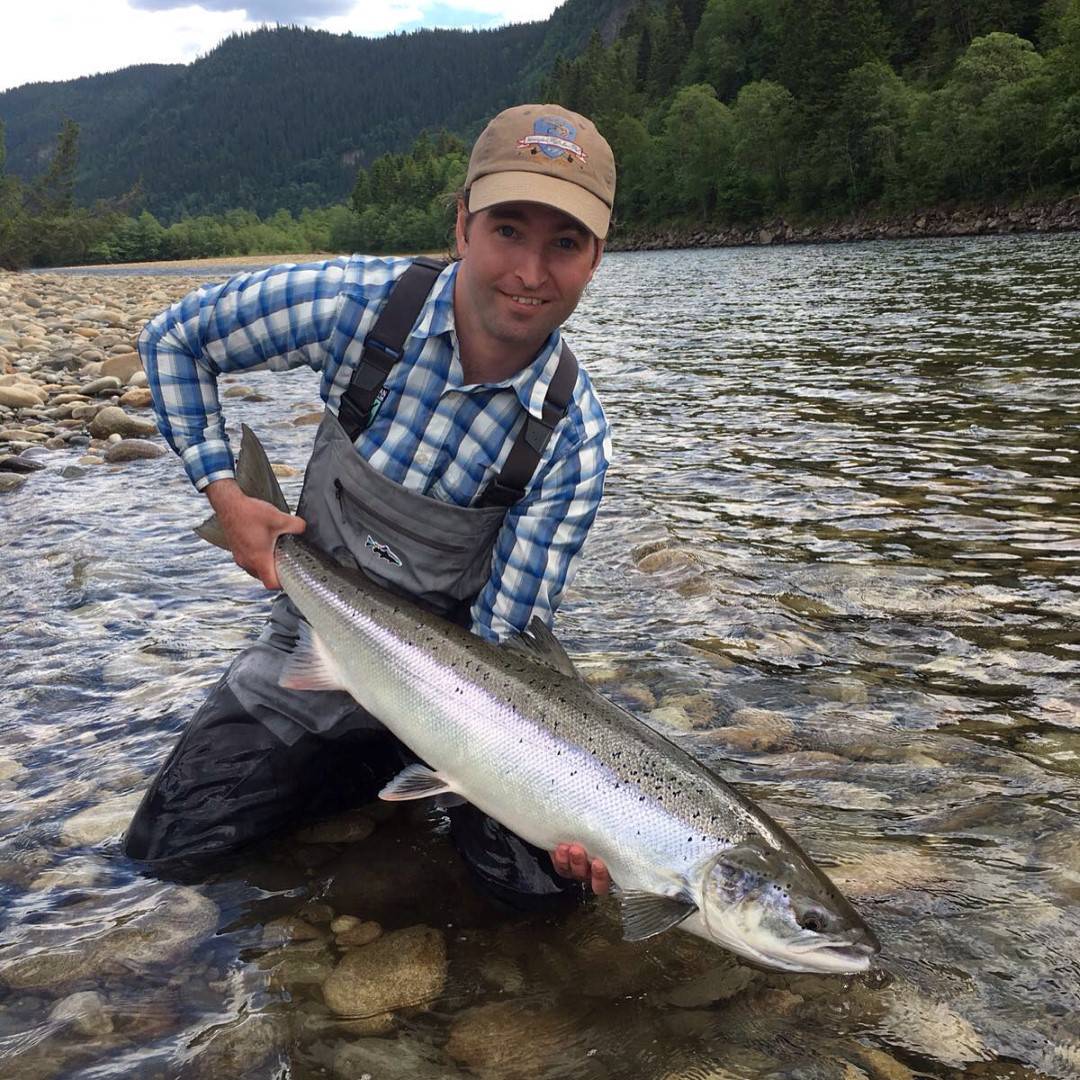 What a nice fish – congrats Peter!

It seems as though the fish are moving in all our beats, and we have been catching fish basically in all parts of the river. Jerome Pommel caught a good fish on our new Beat G1, Granøien, weighing about 8kg. Daniel Persson was able to catch and release another great fish from Bogen Sondre (BS1).

Daniel with his 2nd fish of about 10kg this week!

Pascal van Reckem from Belgium came back this year to fish for his 2nd time for salmon and wanted to try an earlier week this time. A decision which paid off nicely, as he managed to catch his first June salmon on the Gaula – a nice fish weighing 7kg, caught on BS2. 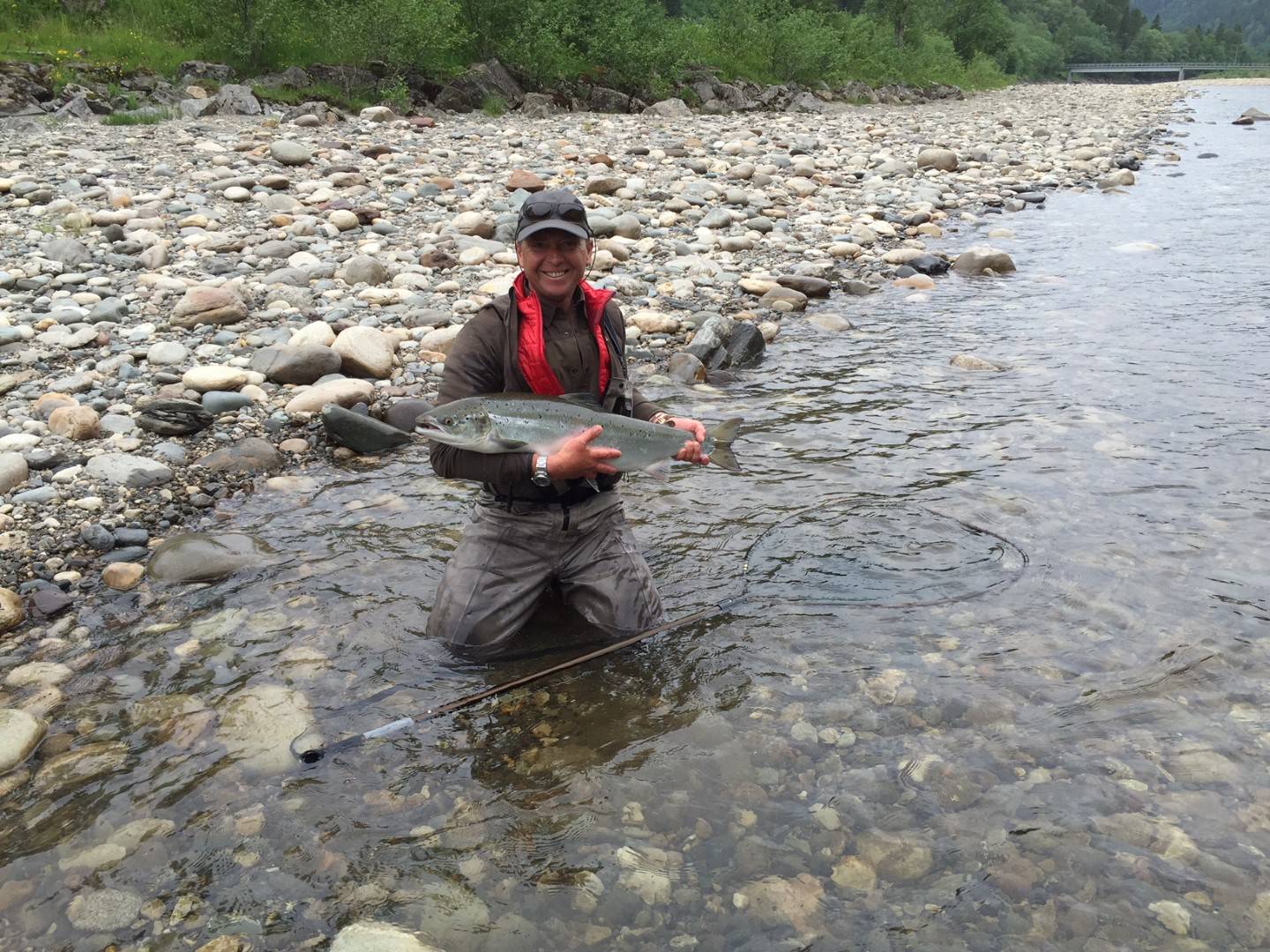 Pascal with his salmon from BS2.

Also regular guest Karsten, came last minute for only a couple of days, and it didn’t take him long to hook up with his first fish of the 2016 season. 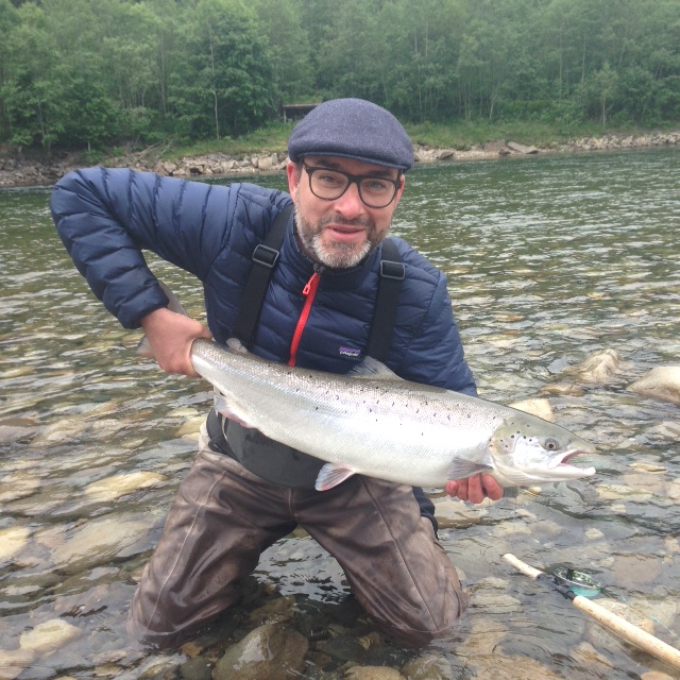 Karsten with his first fish of the season 2016 – weighing about 6kg caught on Beat B1.

Manfred Raguse caught another fish on Beat BS1 about 7,5kg and Ludovic Pommel fished the same Beat a short time later, and was able to catch another salmon of 8kg. Ludovic went back to the same beat during the night as it was “free for all” and managed to catch the next one on Beat BS1 – again 8kg fish.

Thies Reimers fished Beat G1 and caught and released a salmon of 7,5kg, also a bit later Jerome Pommel caught a fish about the same size in the same Beat.

On beat BS1 it was again Karsten who caught the next salmon, a medium sized fish measuring 80cm.

Then our Italian guest Pierluigi Rongaclione who joined us to try his luck for the first time salmon fishing, but only had 3 days of fishing.  Yet with a short window, luck was on his side, and he managed to land a nice fish! He caught and released a nice fish on the E-Beats, his first Atlantic salmon. 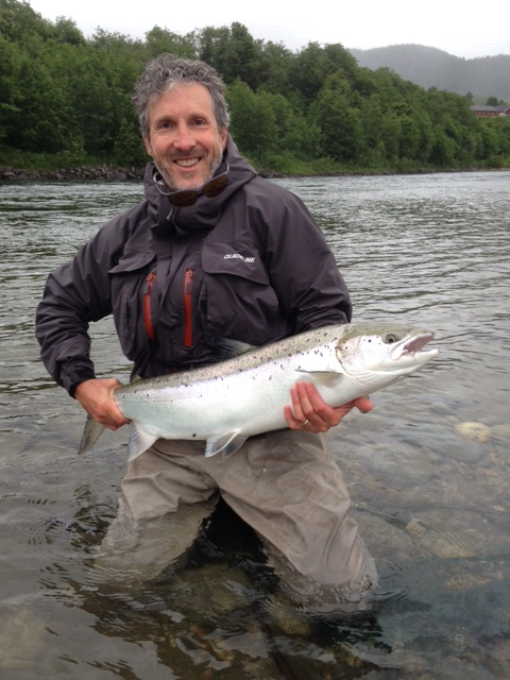 Pierluigi with his first salmon – weighing about 8 kg caught on Beat E2.

But this day should be even better for Pierluigi. In the evening he fished together with Karsten on Beat B1 and caught his next salmon, also weighing between 8,5 and 9kg! What a day! Sometimes you just hit it right – congratulations Gigi! 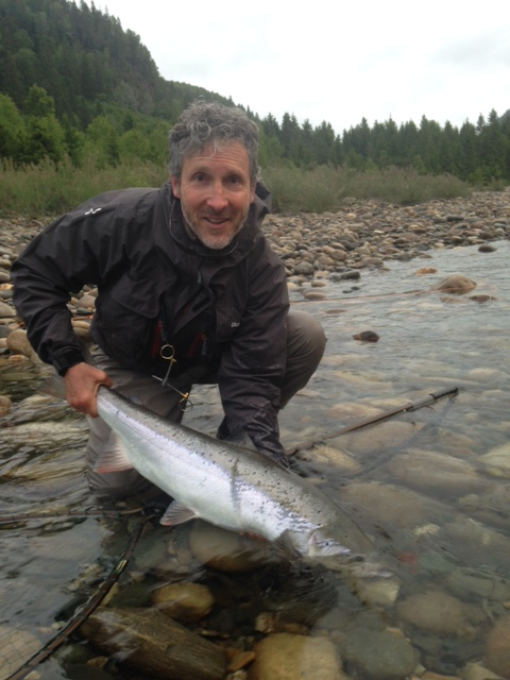 Pierluigi with salmon Nr. 2 – a good way to start salmon fishing! During that evening more and more

During that evening more and more reports kept rolling in, and it seemed to be a really “fishy” day! Rene managed to catch his next fish – again a big one, this time on Beat BS1. Rene caught 3 fish over 100cm during his week – a great week for him! 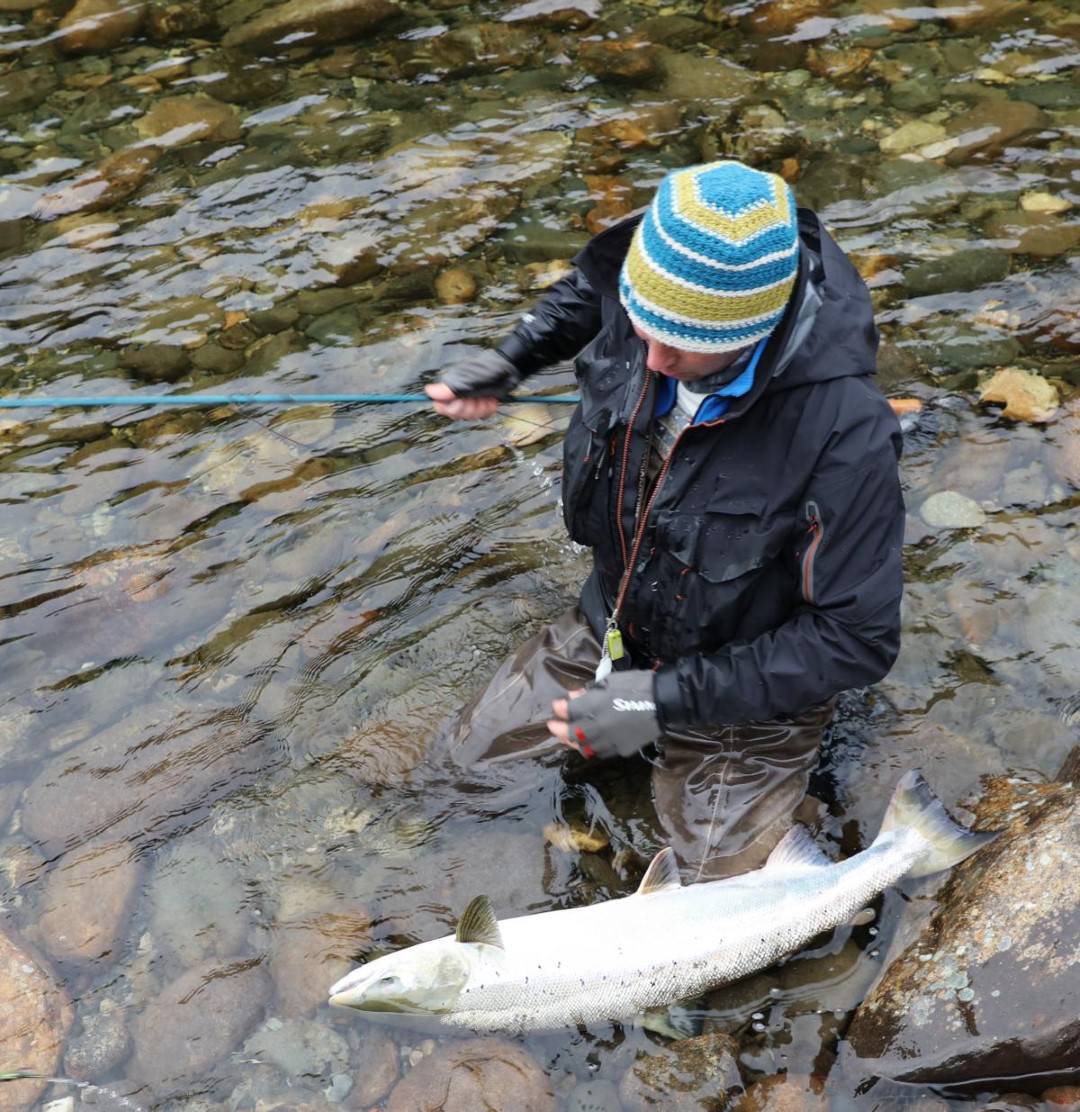 Regular Austrian guest Johann Btieler manged to catch two salmon on Beat C2 that night, the first one about 5kg the 2nd about 8kg. On the next morning he caught another nice fish on Beat B1 – a good fish weighing about 9kg.

Robert Heintschel, as well from Austria caught a good fish of 7kg on Beat BS1 during the night. On the next morning it was again Karsten who caught his 4th fish if his 3-day trip – this one was caught on Beat G1 and weighing 9kg. Well done Kartsten!

We also had two fishermen from Trondheim fishing with us this weekend – they had a great time and and landed 4 fish. Lars Lundlie caught 2 fish of about 12kg and another fish of 7kg and his friend Tore Larsen caught a medium sized fish of 5,3kg which he kept as it was bitten by a killer whale and was injured quite badly. Also Peter Ericson caught another fish of about 10kg on the Lodge Pool.

During Sunday morning, our American guests, Bob and Zach Fanch fished Beat E1a – and Zach was able to land his first Atlantic salmon, weighing in at 6kg – the fish bled and had to be kept. This was Zach’s first salmon, and the trip was to celebrate his belated birthday, so Congratulations, and Happy Birthday Zach! 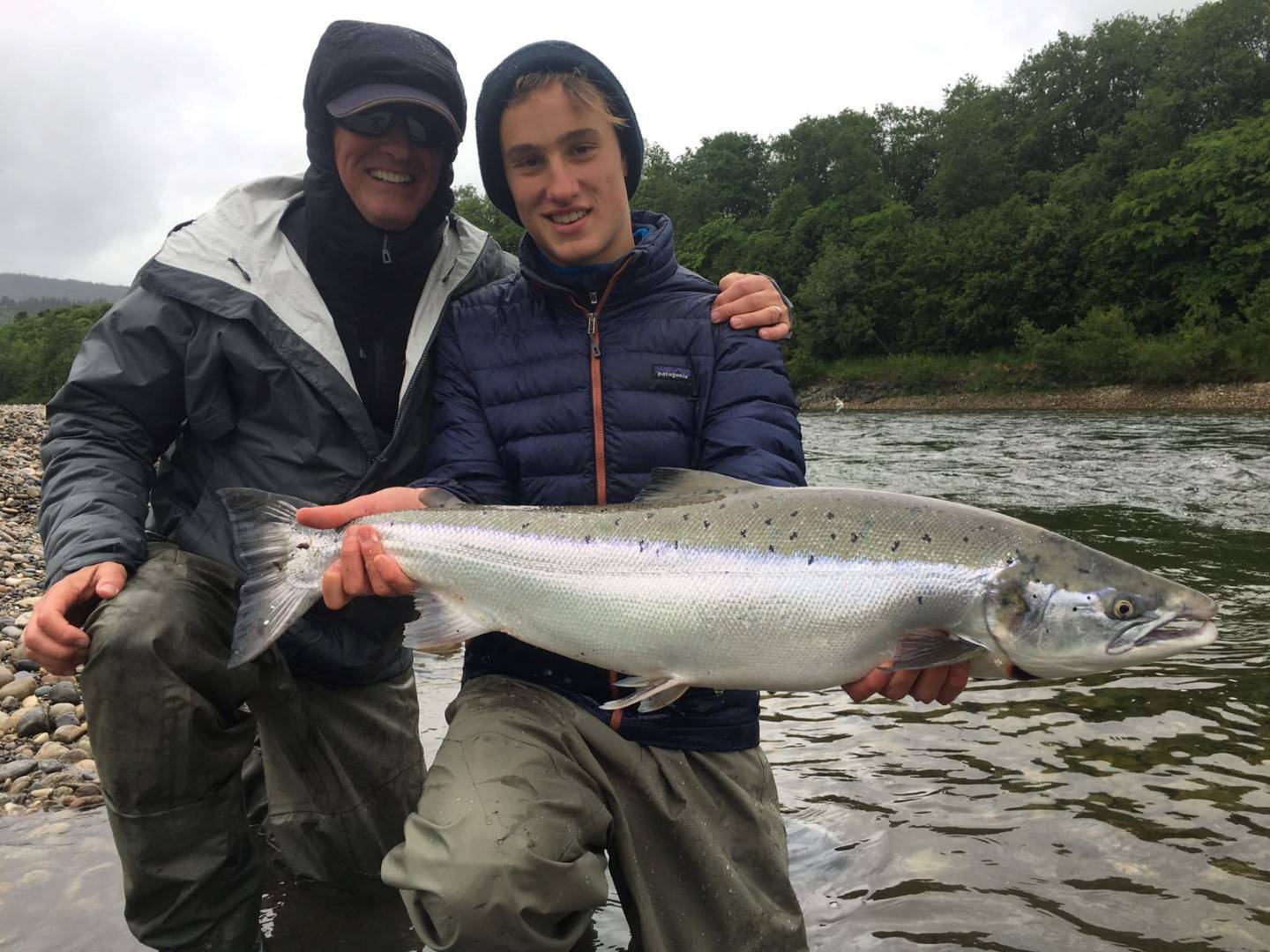 Old regular guest Tim Sparkes, who returned again to fish with NFC,  arrived earlier than his partner, and while picking up Bruce from the airport he had a short stop at Beat E1a. It only took him 25 min to land his first fish for the trip – weighing about 8,5kg – a good start. 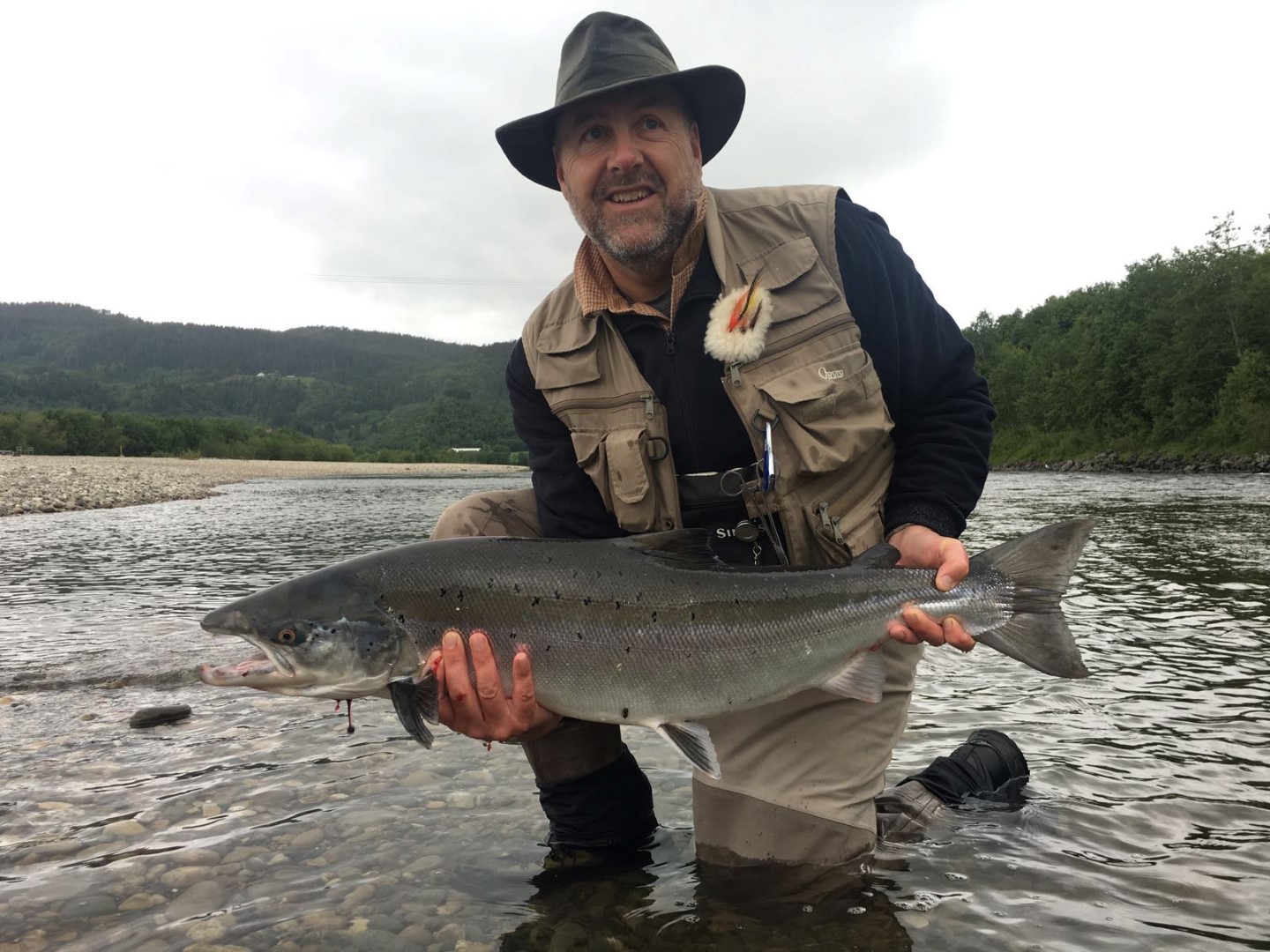 Tim with his salmon from the E-Beats.

While we sit here writing this weekly update, more catch reports are rolling in. The fishing is simply great! The Gaula is producing good fish throughout the watershed and it all looks like it will continue to be a great season. The next 3 weeks are fully booked but after that we still have a few free rods here and there– so if you have not booked any salmon fishing yet, you are welcome to get in touch and we would be happy to find a way to accommodate you.