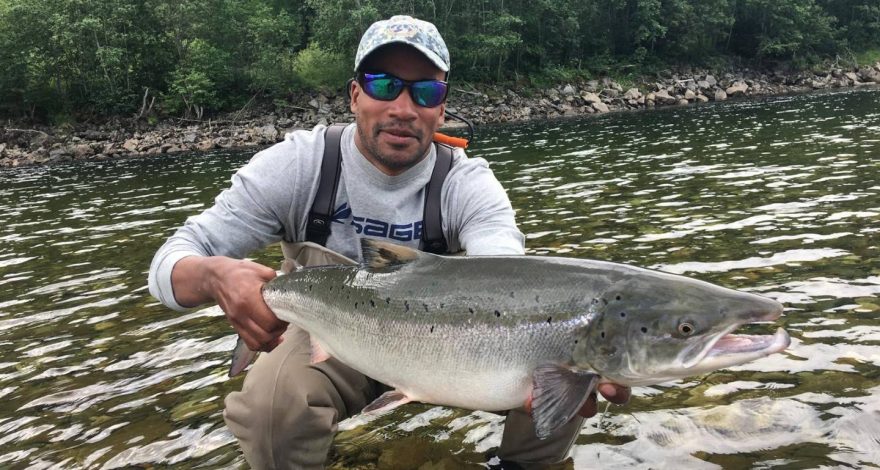 The water level was constantly dropping during the past week. The beginning of the week still offered consistently good fishing with several very big fish caught.

Long-time regular NFC guest and friend, Mortan Carlsen returned to fish with us during week 26 and he had a great start to his fishing week with a big fish of 14kg on Beat E1a during Sunday evening after the welcome dinner! 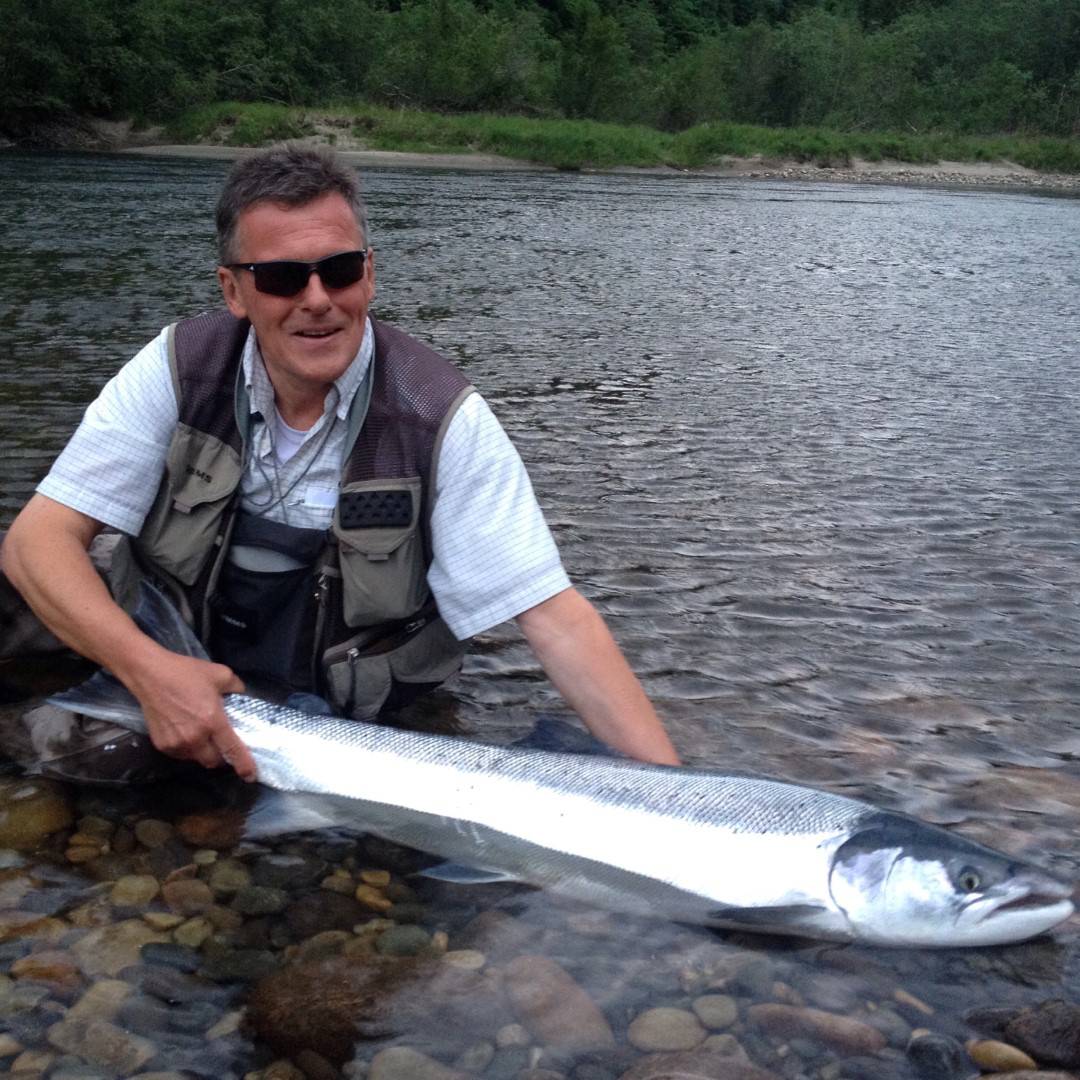 After midnight Mortan returned to the Beat and caught another two fish of 5 and 8kg, what a start!

Also new Norwegian guest Trond Wise Hansen started with a good fish of 88cm. Rolf Spjelkavik fished our Beat C2 and was able to land his first fish of the week measuring 90cm. 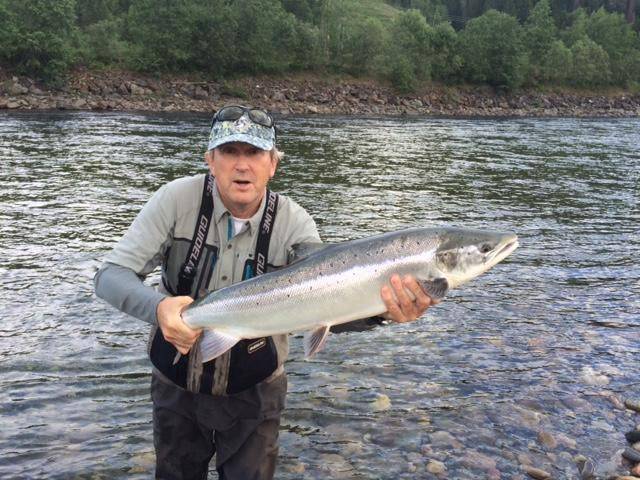 Rolf with his salmon of 90cm from Beat C2.

On the next day Andreas Witt fished Beat E1a and it did not take long until he hooked a good fish and shortly later landed a salmon of 94cm and 8,5kg. 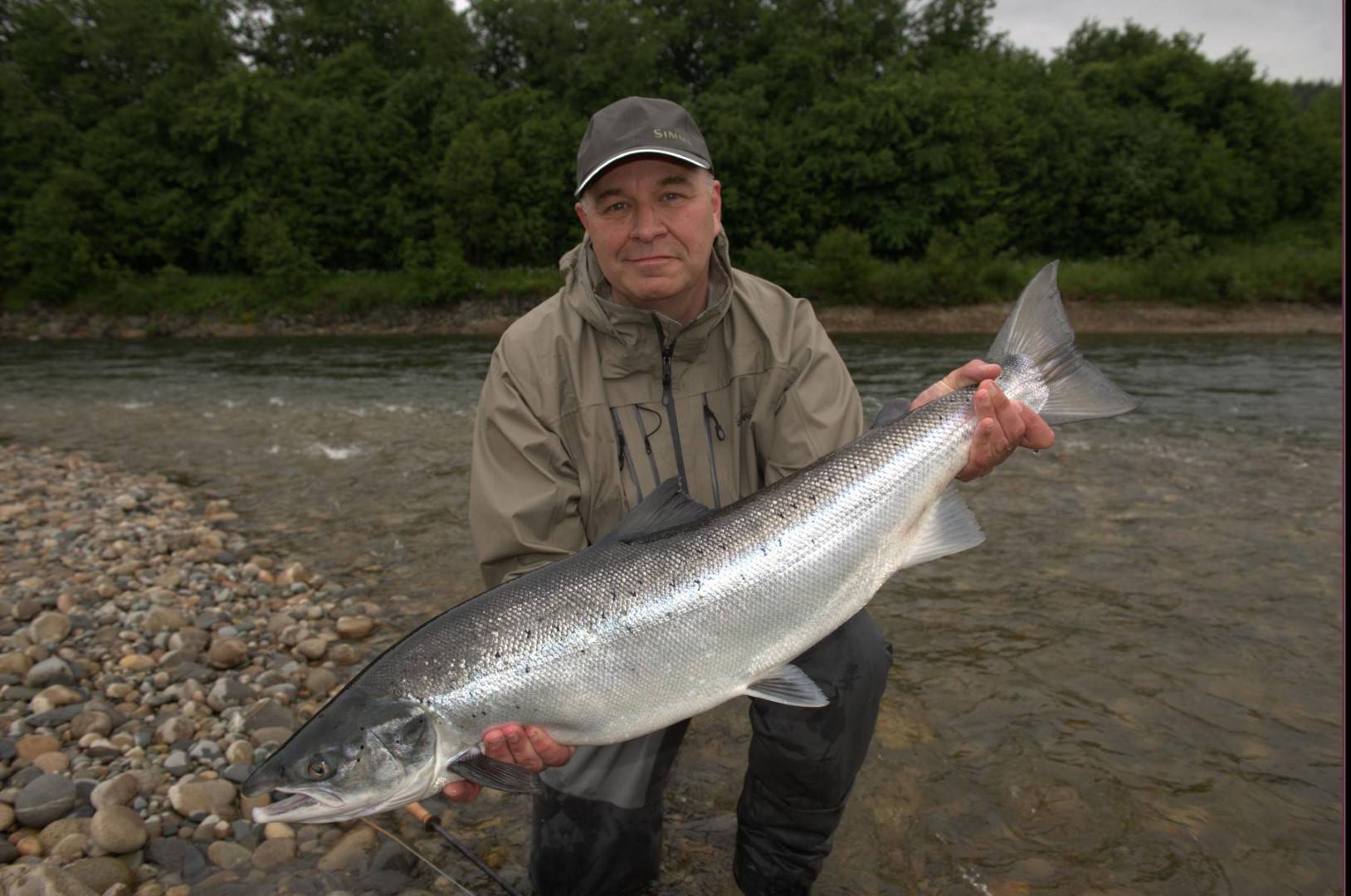 Andreas Witt with his first salmon for the week – 94cm from Beat E1a.

Mortan Carlsen was at it again when he fished Beat B1 and on his first round through the pool he hooked his next big fish – actually an even bigger fish! After a strong fight Mortan was able to land the biggest fish on NFC waters this season so far – 117cm and approximately 15,5kg! What a great fish! 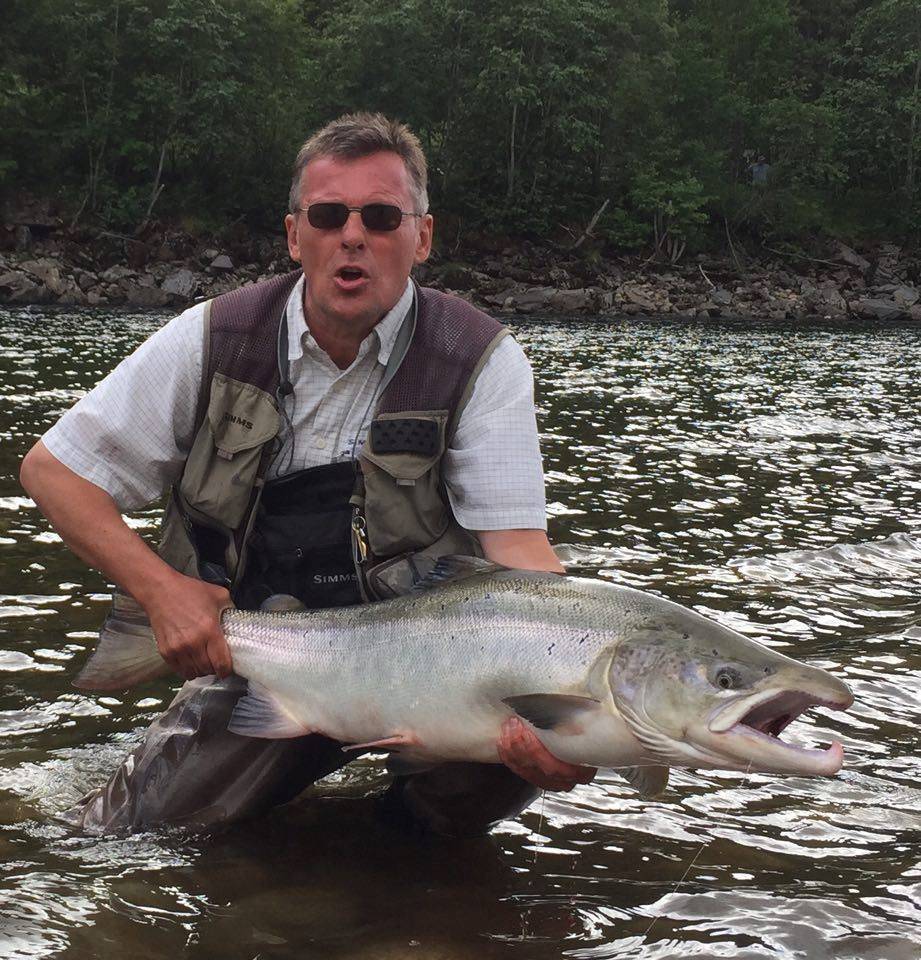 Just after he released his big fish he continued to fish the Pool down, and at the bottom end he hooked another fish – this time “only 100cm”, and approx. 10kg! 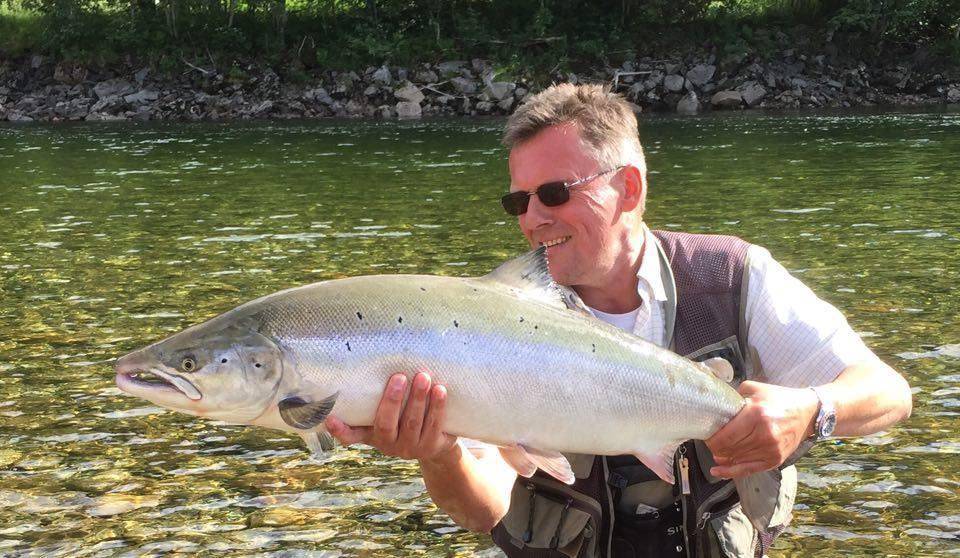 Mortan with his 2nd fantastic fish of his session on Beat B1 – approx. 10kg bright silver!

First time salmon fisherman, Thomas Wolpow from the US was able to catch his first Atlantic salmon on Beat E7 on his 2nd day of fishing.  Also Rolf Spelkavik caught a fish on Beat E7, not a big one but fresh, just from the sea! 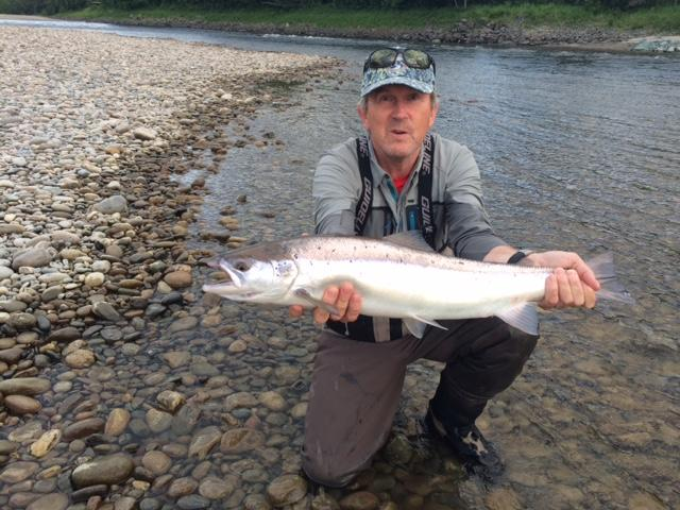 Rolf with his fresh salmon of 73cm from Beat E7.

Later during the night Rolf fished Beat C2 and caught his next fish – a nice fish of 93 cm, probably about 8kg, already a bit coloured, this fish has been a while in the river. 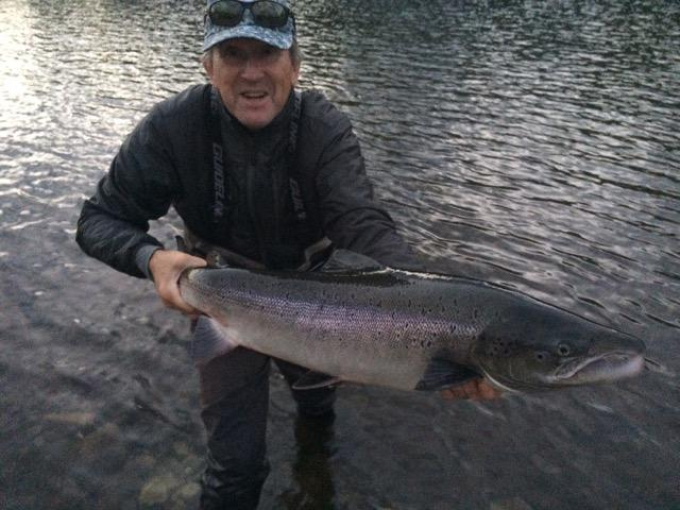 Calix Black fished during the afternoon on our Beat B1 and caught and releases a good fish of 90cm. 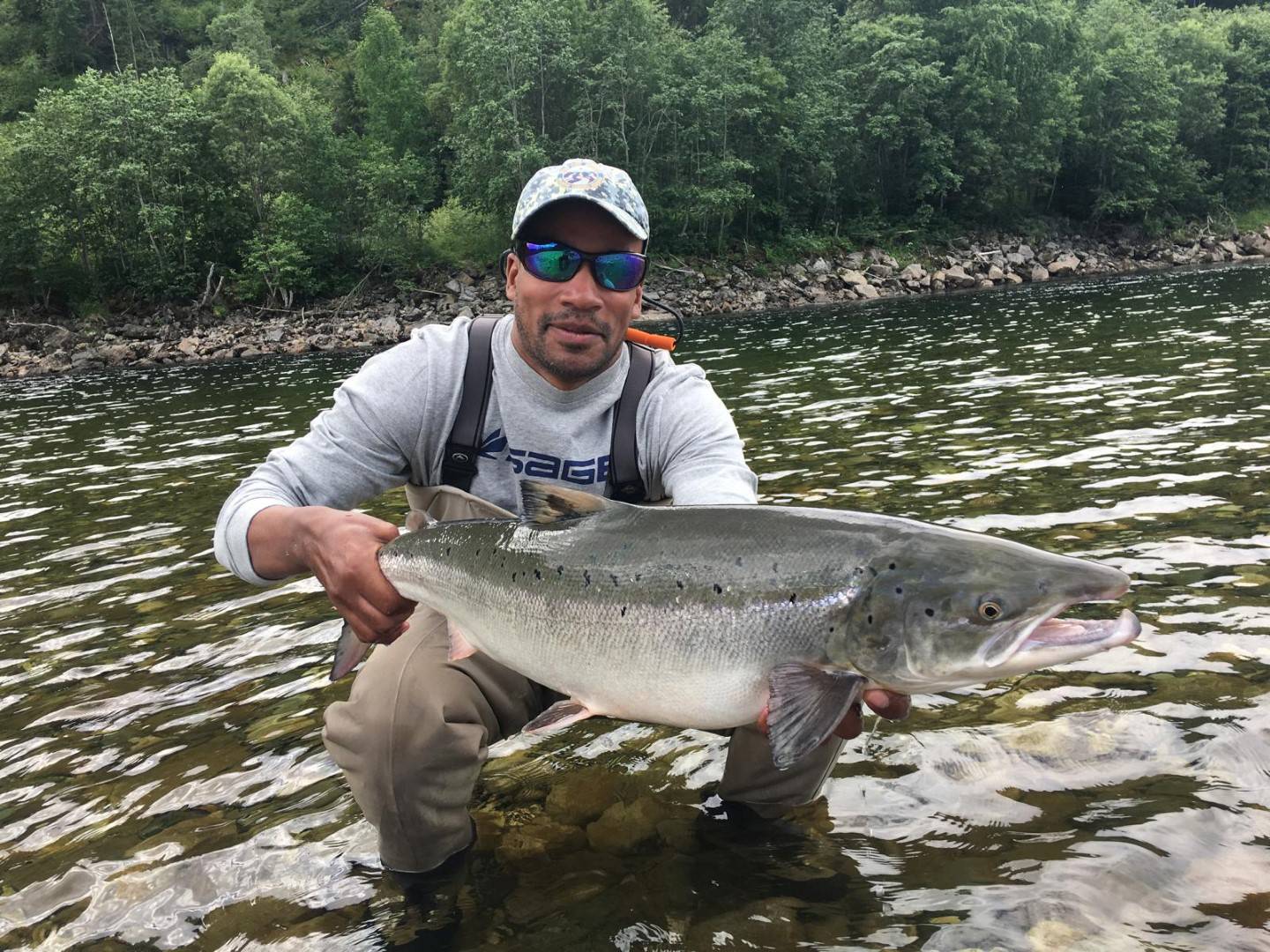 Calix with his salmon from Beat B1.

His fishing partner Gregar Barikmo hit the jackpot later and caught 3 salmon on Beat E1 and E2 between 82 and 87cm! 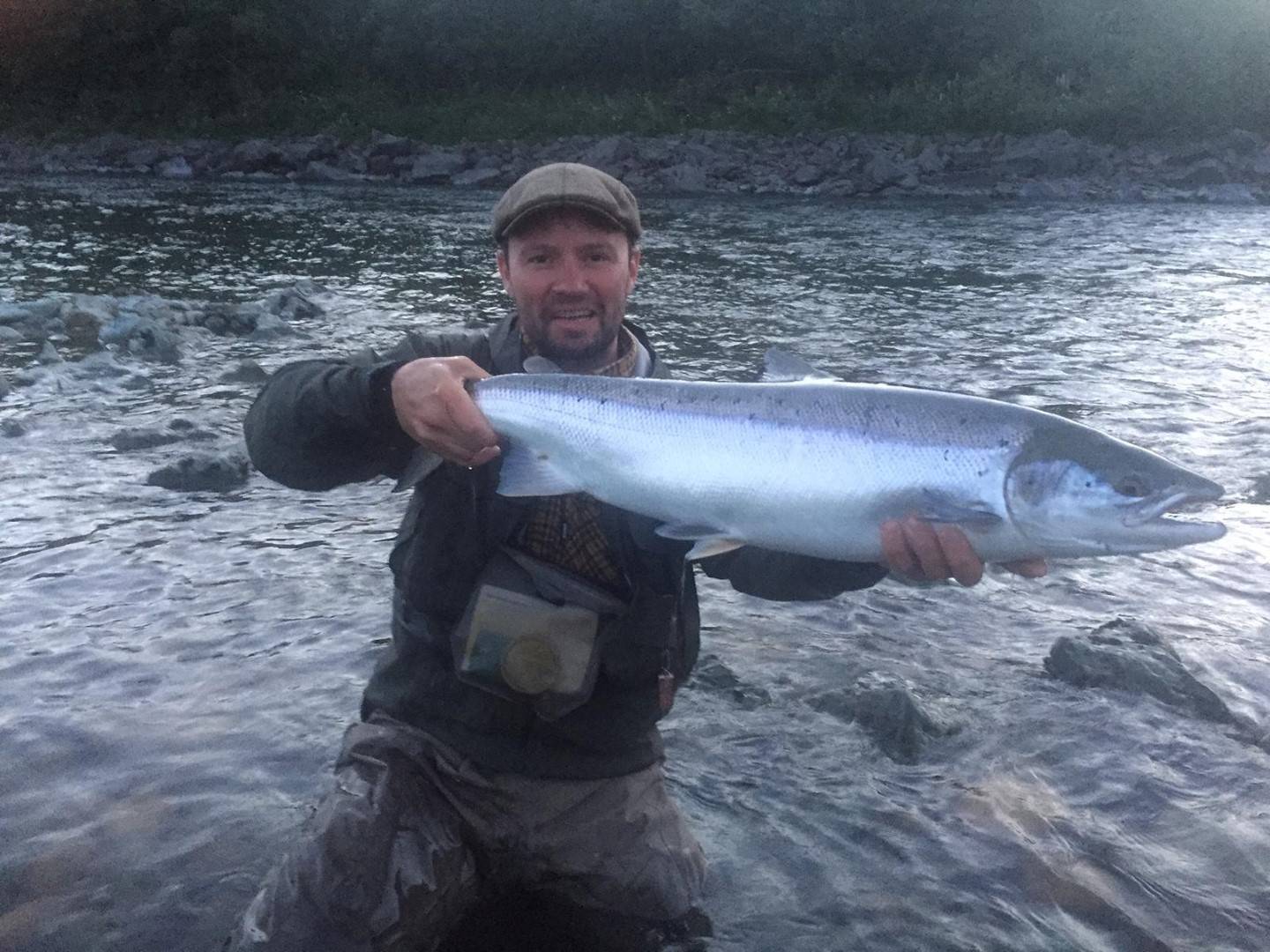 Yngve with one of his fish from the night session on Beat E2.

Also our English guest Oliver Falk was able to land two fish during his week, a good fish of 10,5kg and another smaller fish of 4kg. Maurizio Restaino caught two fish on Beat C1 earlier this week.

The last salmon for week 26 was caught by Andreas Witt on Beat E4 measuring 90cm and probably weighing about 8kg.

While it was an unusual week 26 because of the low water, despite the conditions we experienced another good week on our Beats. There have actually been more fish caught than one might think with this low water!

Luckily on Sunday it started raining and the forecast for the coming days promises a change of the weather to more clouds and some rain which hopefully will give a little rise to the river and improve the fishing back as it was before it got very low –at least for the upper river! We are glad we have enough water to fish below the Gaulfossen, as these Beats all produce a good amount of fish no matter about the water level, and a little rain would certainly get fish to move again and the upper beats will fish even better again!

We got already the first reports of caught fish for the week started last night from beat E7 and some others!

We will keep informed!

Sincerely your team of the