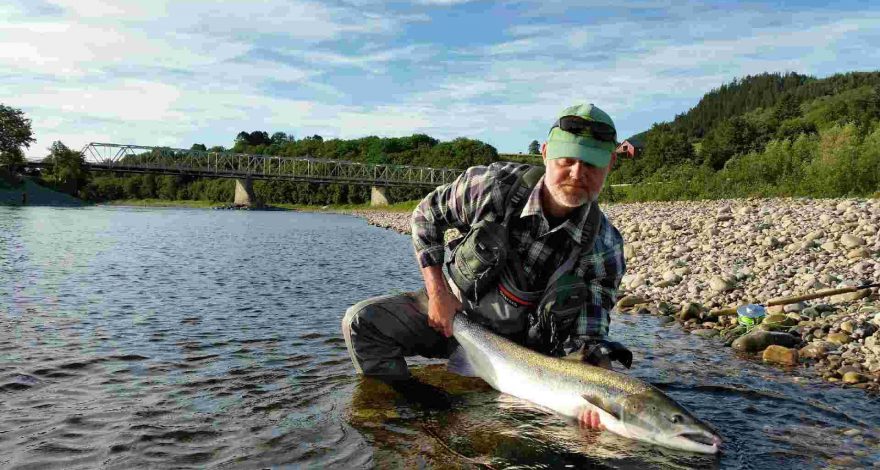 Week 27: Another week of good fishing, despite the low water!

Week 27 started out promising with a little rise of the water level. NFC regular guest from Germany, Werner Brinker started out the week fishing beat E7 and caught a great fish of 10,3kg (22.7lbs)! On Beat B1 it was our Norwegian guest Stein Erik Lid who started his week with a grilse of 2,5kg. Also Bruce Lindley caught medium sized fish in the first day of the week of about 5,5kg and another salmon of about 8,5kg on Beat C2. 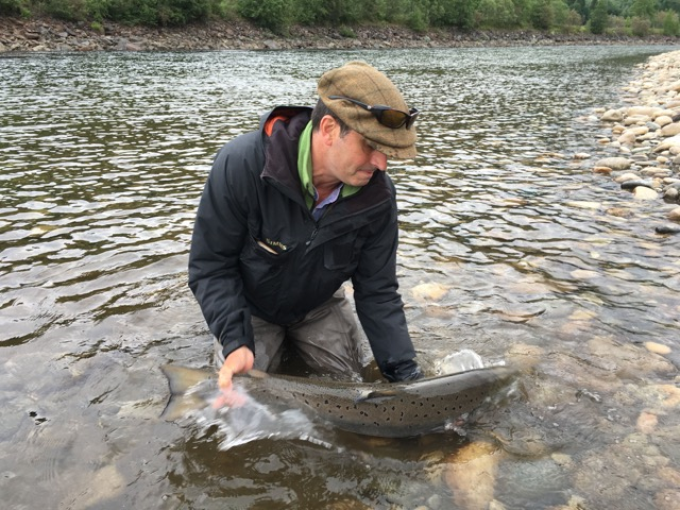 Bruce Lindley with the bigger of his two fish of the session on Beat C2.

Bruce’s fishing partner, Jean-Luc Verstraeten was able to catch a good fish of about 9,5kg (21lb.) during that session. The fish was injured most likely by a seal, but anyway in good condition and could be released well. 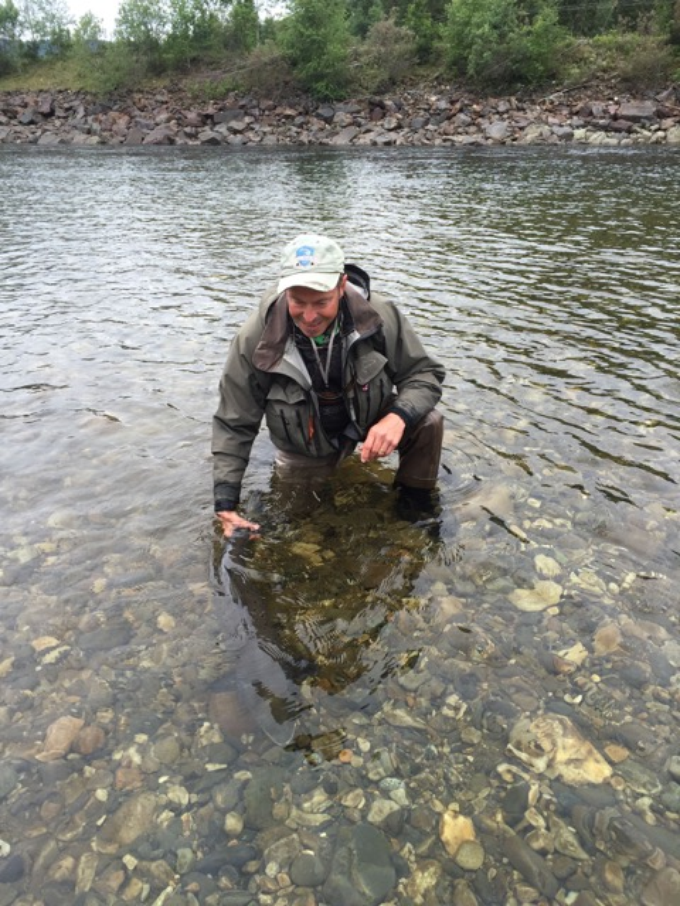 Jean-Luc with his salmon from Beat C2

Gerald Schimmetta caught a fish of about 6kg on Beat E7 while his fishing partner Stein Erik was lucky again and caught 2 salmon of 4,5kg and 11kg (24lbs.)!

Also Manfred Raguse was able to catch and release his next two salmon both on Beat E1a, measuring 69 and 82 cm. Hans E. Wolff was able to land a grilse on Beat E6.

The next day would end up being a great day for Bruce Lindley again, as he managed to catch 3 salmon on Beat B1! Starting with a salmon of 6kg, another 7,5kg and a big fish of about 10kg. Jean-Luc lost a couple more fish during the same session – it seemed as though there were some fish moving on that Beat! 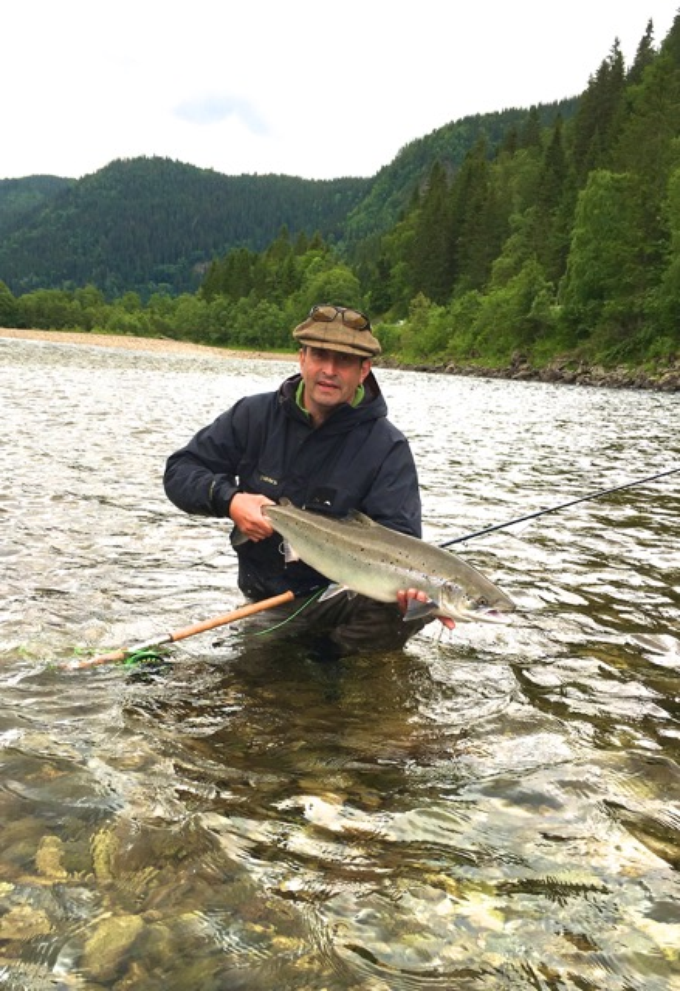 Bruce with his first fish of 6kg. 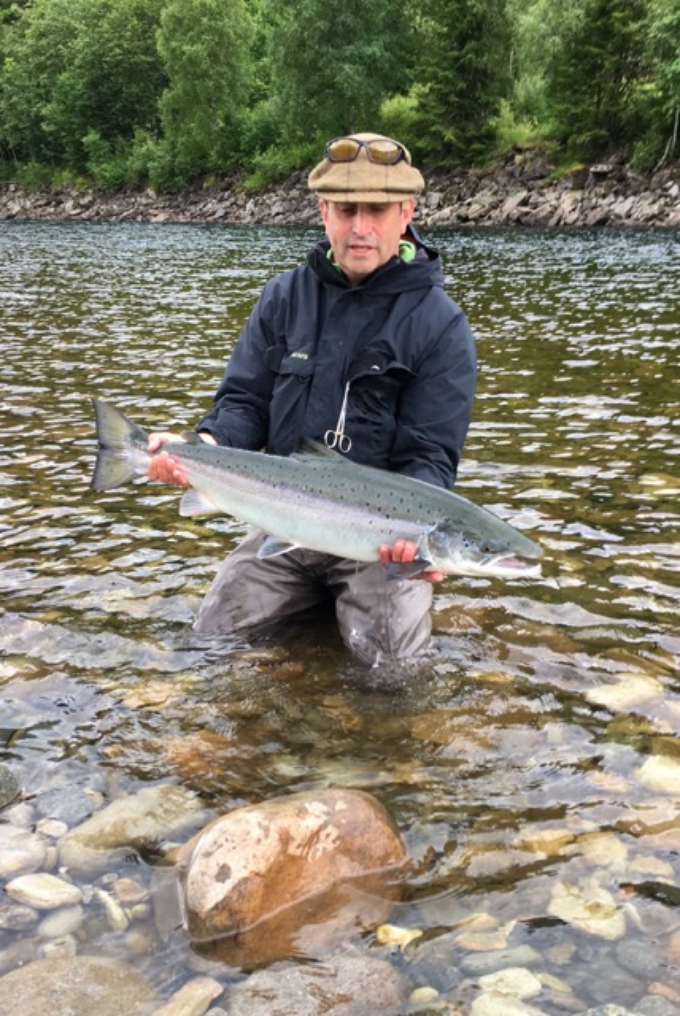 Bruce with Nr. 2 from Beat B1 that morning 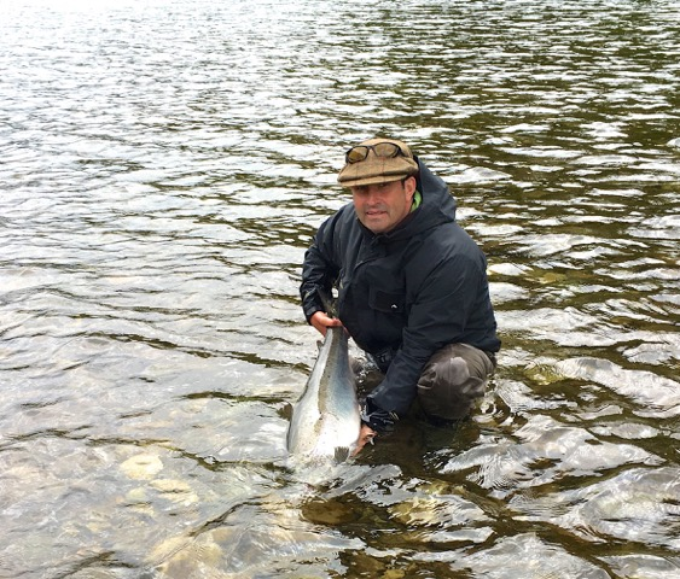 Bruce with his fish of about 10kg – what a great session! 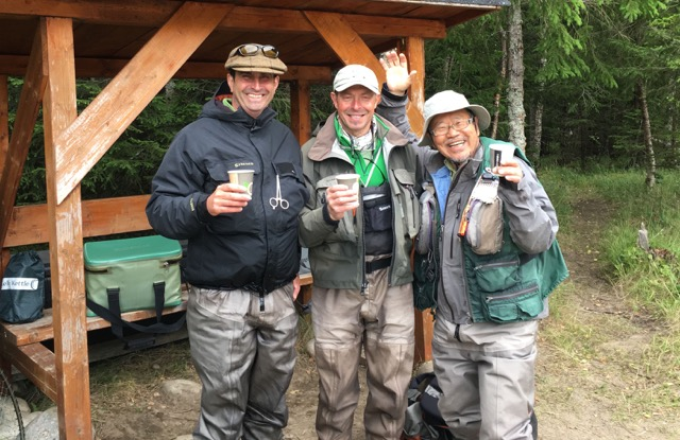 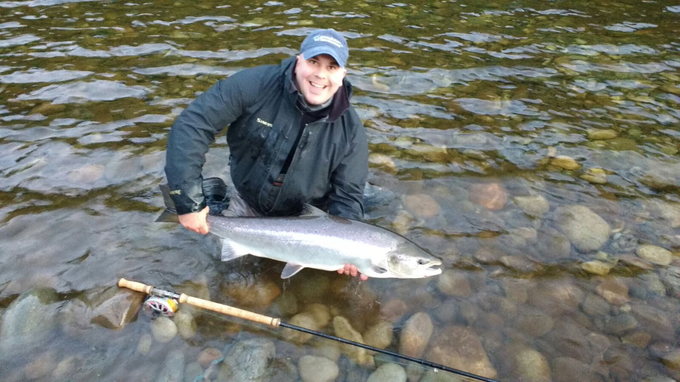 Andre Scholz with his salmon from Beat B1.

Andre also caught a quite big seatrout of 75cm, maybe weighing 4kg on Beat G1 during the afternoon. It is great to see some larger sea trout around the Gaula again- a fun alternative to salmon!

Regular Japanese guest Takuo Noda had a good morning on beat E1 and E1a and caught grilse and a good fish of 8,5kg! Well done, Takuo!

Karsten K. returned fish with us again and landed a nice fish on Beat C1 which he estimated to weigh about 8kg. Then it was again Bruce Lindley, who managed to catch his next salmon, this time on Beat D2 and weighing about 6,5kg. 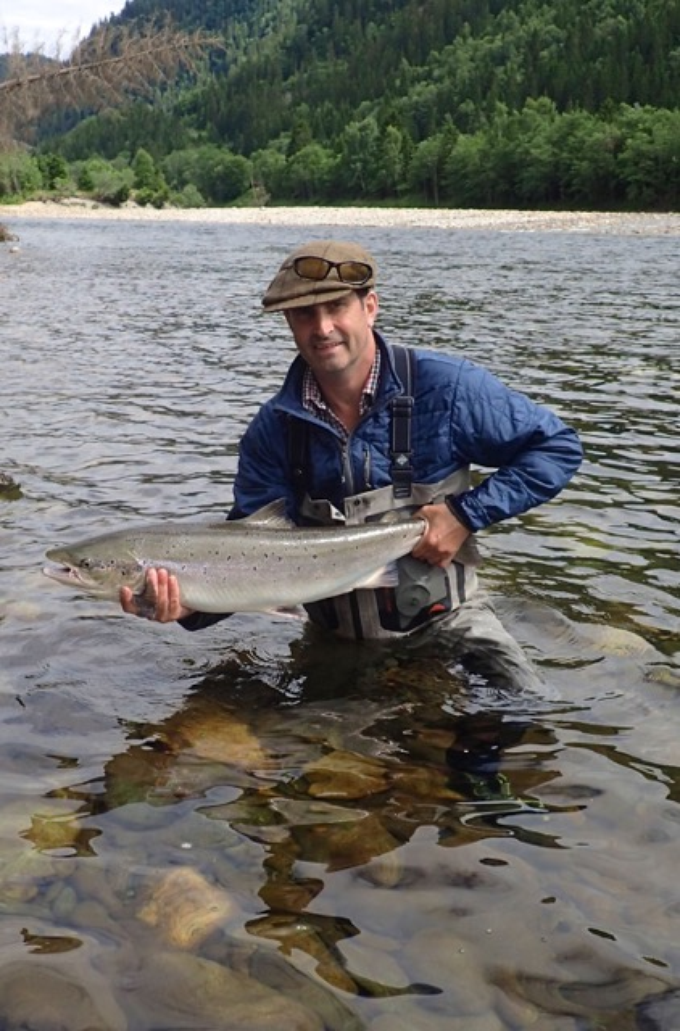 Jonathan Argent caught a seatrout and a nice salmon of about 8kg on the next day. Also Sacha Pütz was able to land a grilse and a medium sized salmon on Beat E4.

Stein Erik Lid fished beat E7 again– and it seemed as though E7 was his lucky beat, as he caught his next big fish, which also turned out to be his new personal record with a nice fish of 110cm and weighed about 13kg! 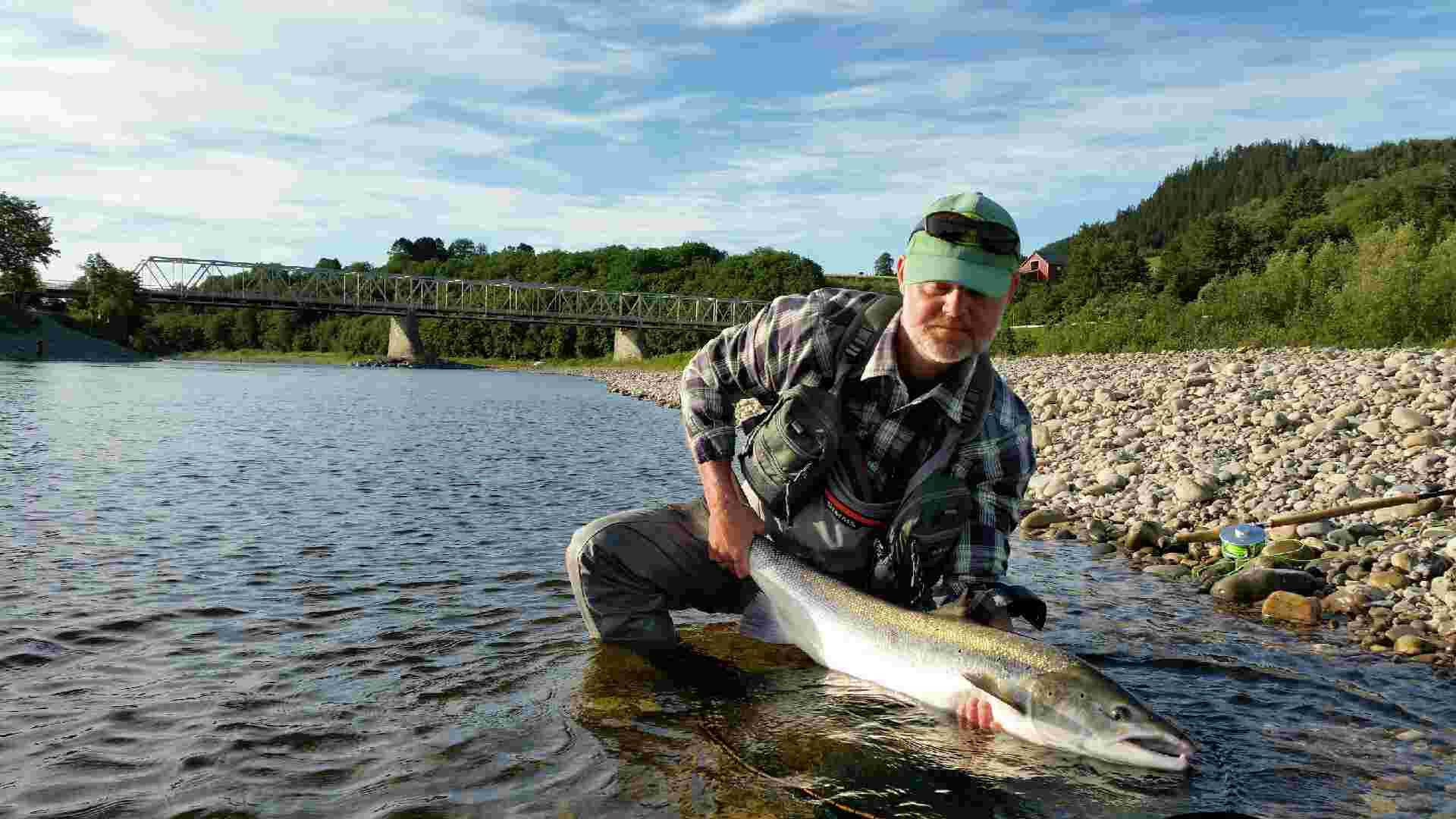 Stein Erik managed even to catch another fish of about 5kg on Beat E3 on the next morning, while of course Bruce Lindley caught his next fish as well. He fished Beat C2 and decided to fish a bit deeper and not long after, another big fish was landed! The whole fight, as well as the release were filmed, and the we will follow up with the video post soon. 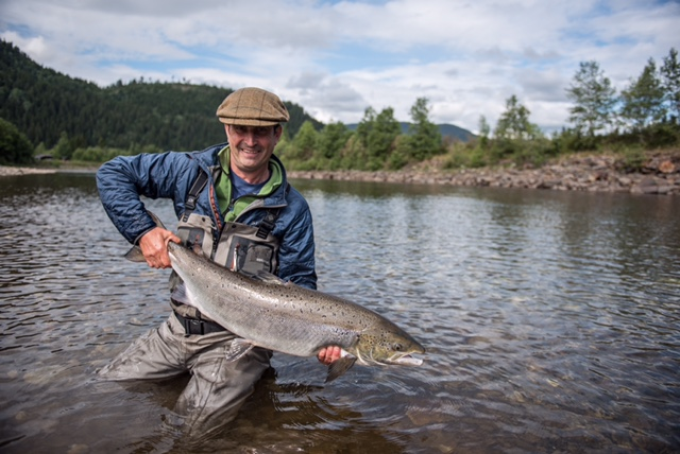 Bruce with his great fish from Beat C2.

The week ended with another salmon of 6kg from Beat E1 for Andre Scholz and superb salmon on our Bua Bridge Pool. It was the biggest salmon so far from that Beat. Maurizio Restaino decided to try his single hand, 7 weight rod, and although the rod snapped during the fight, Maurizio was able to land this beautiful fish of 102cm- a new personal record for Maurizio as well- congratulations!!

We are waiting with fingers crossed for quite a bit of rain today, so hopefully the water level will rise a bit. If so, we should expect some great days coming up! We have welcomed back our big French group led by Fabrice Bergues this week as well as some regular German guests, who are all excited about the prospects of the week ahead!