Week 23: A high water week with some great fish landed on our Beats.

The past week we had quite high water levels and fishing was not easy on the fly, but still, we have landed some great fish on our waters.

Our Italian friend, Alessio Farloni, managed to land a nice fish 96cm which he estimated to weigh about 9kg on Beat E6. 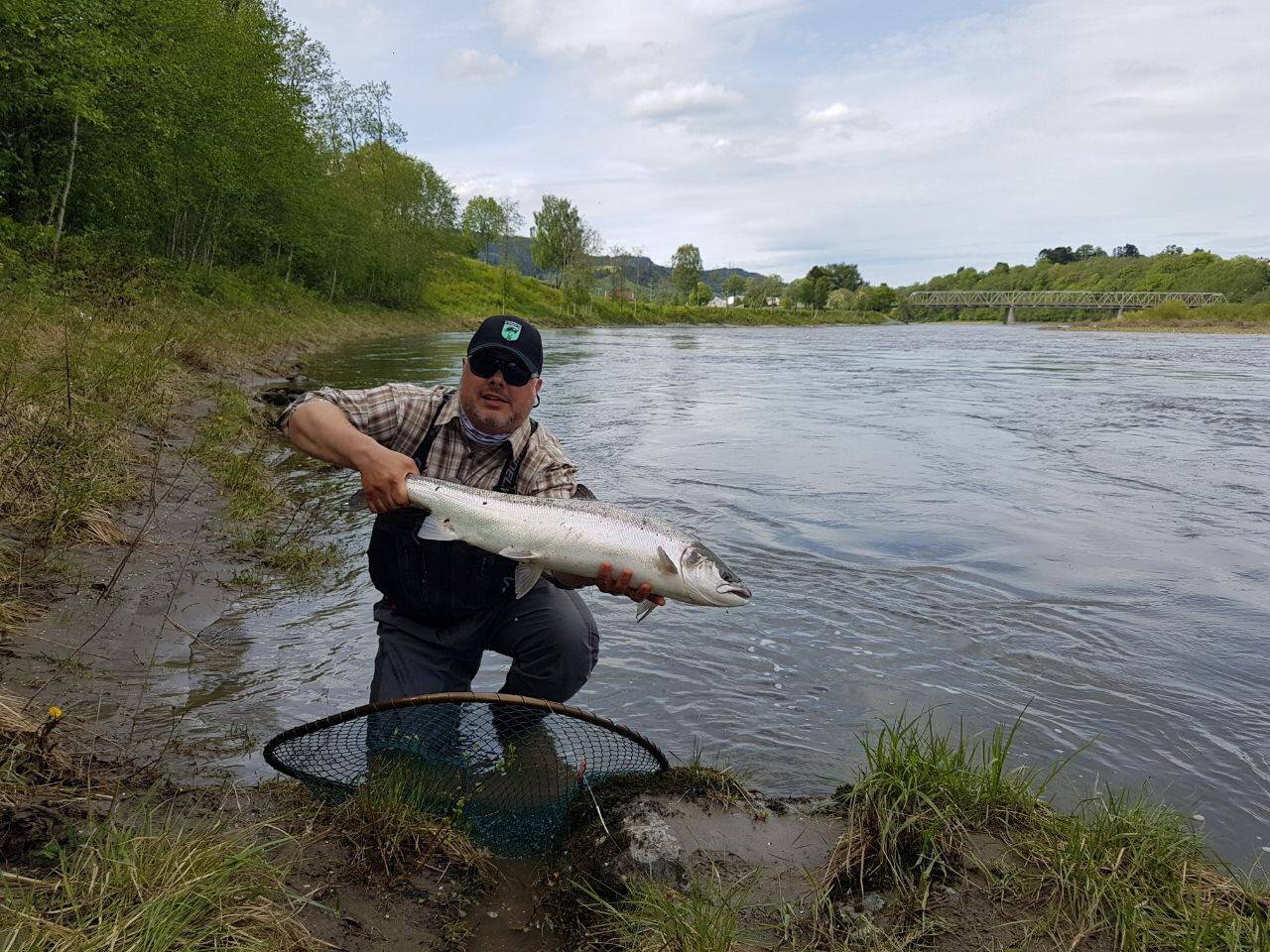 Roland Puff with his big fish from Beat E3.

Also, Manfred Raguse was able to catch and release his first salmon of the season on Beat E2 of 78cm. Mawill Lüdenbach caught as well a medium sized salmon of 79 cm on Beat E7. 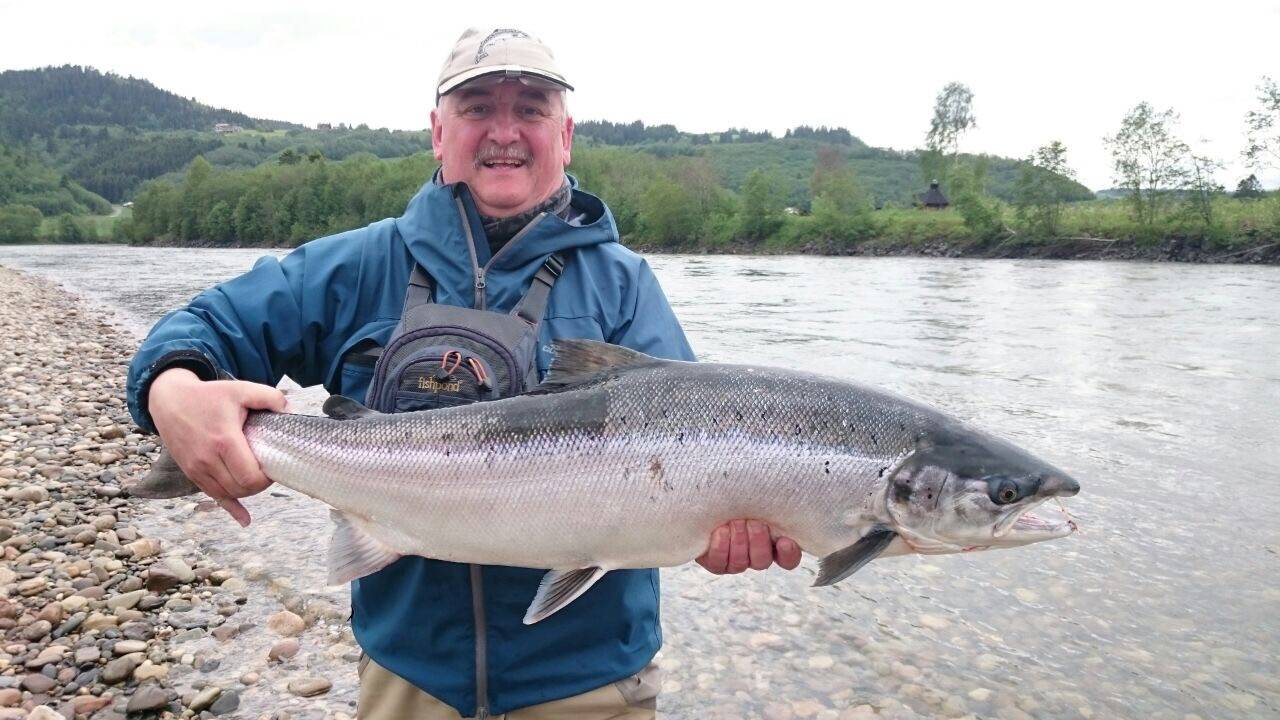 Roland Puff with his big fish from Beat E3.

While we prepared an Argentine riverside barbecue for dinner for all our guests, Thies Reimers took the opportunity to fish a short run through the Beat E7 pool.  He hooked his second salmon of the 2017 season, this time even bigger and a short time later he was able to land and release this great fish of about 10,5kg. 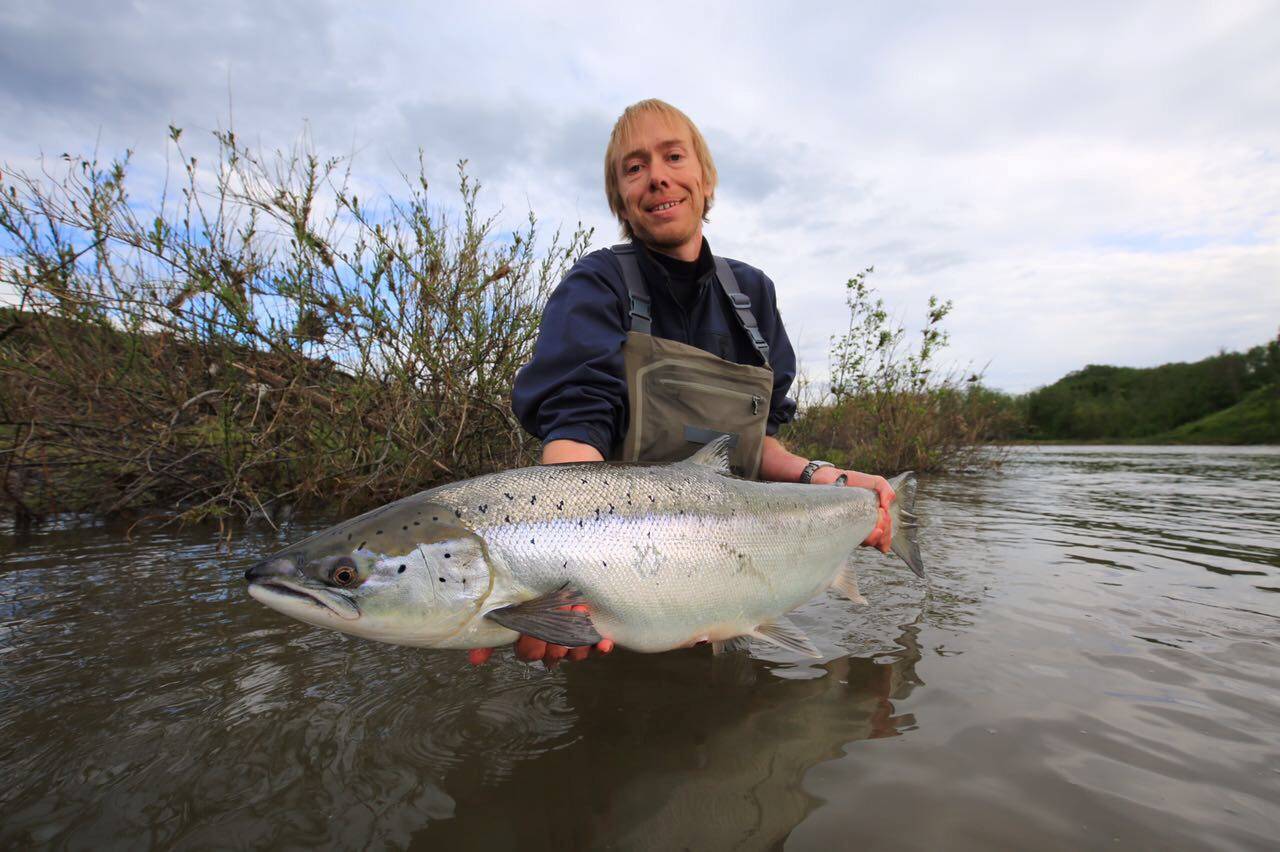 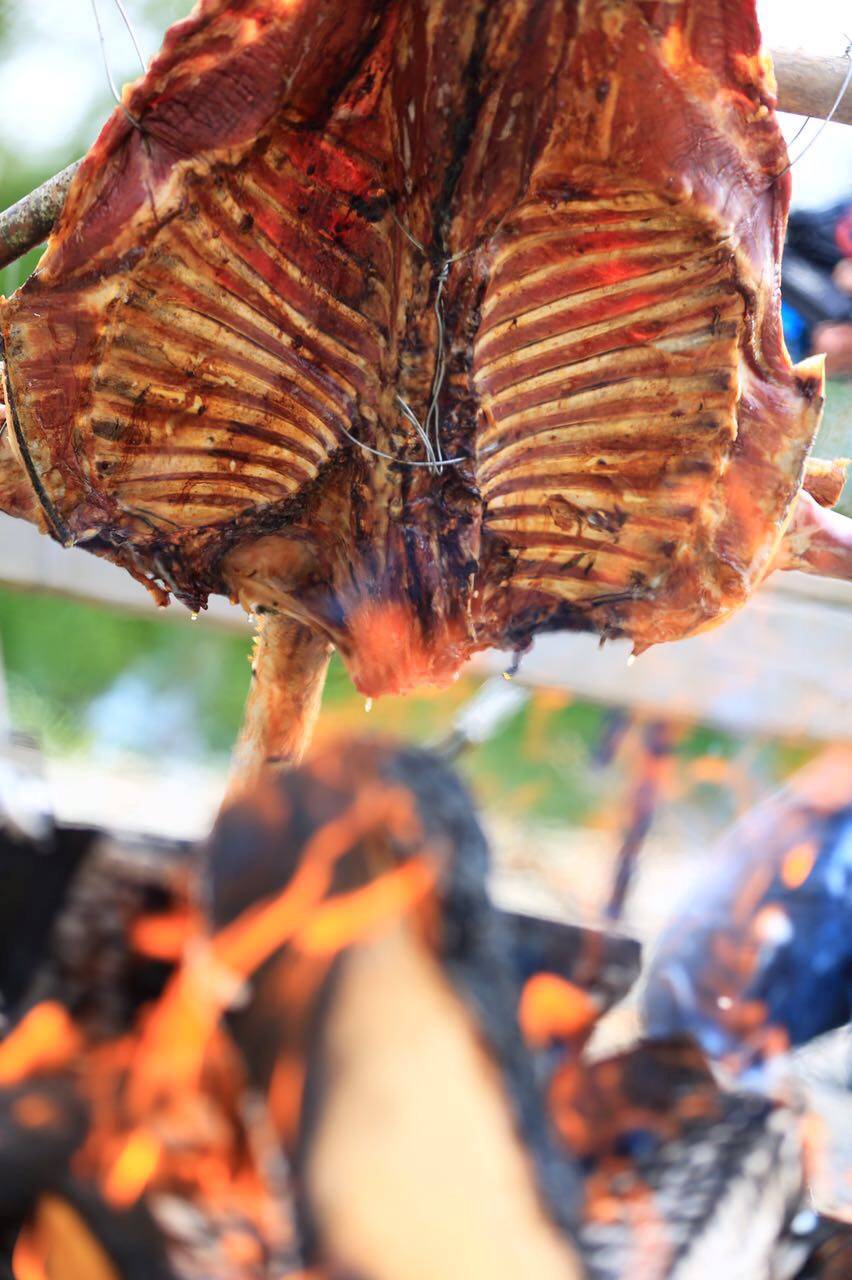 After a delicious barbecue, conditions were perfect for Beat L1.  Our manager, Daniel Stephan, lost another good fish there during the early afternoon, and now Stephan Dombaj and the FFN crew had the Beat and did better! Stephan landed his first Gaula salmon on a “triple tube-fly”. He had to follow the fish quite a way down the river in shallower water. 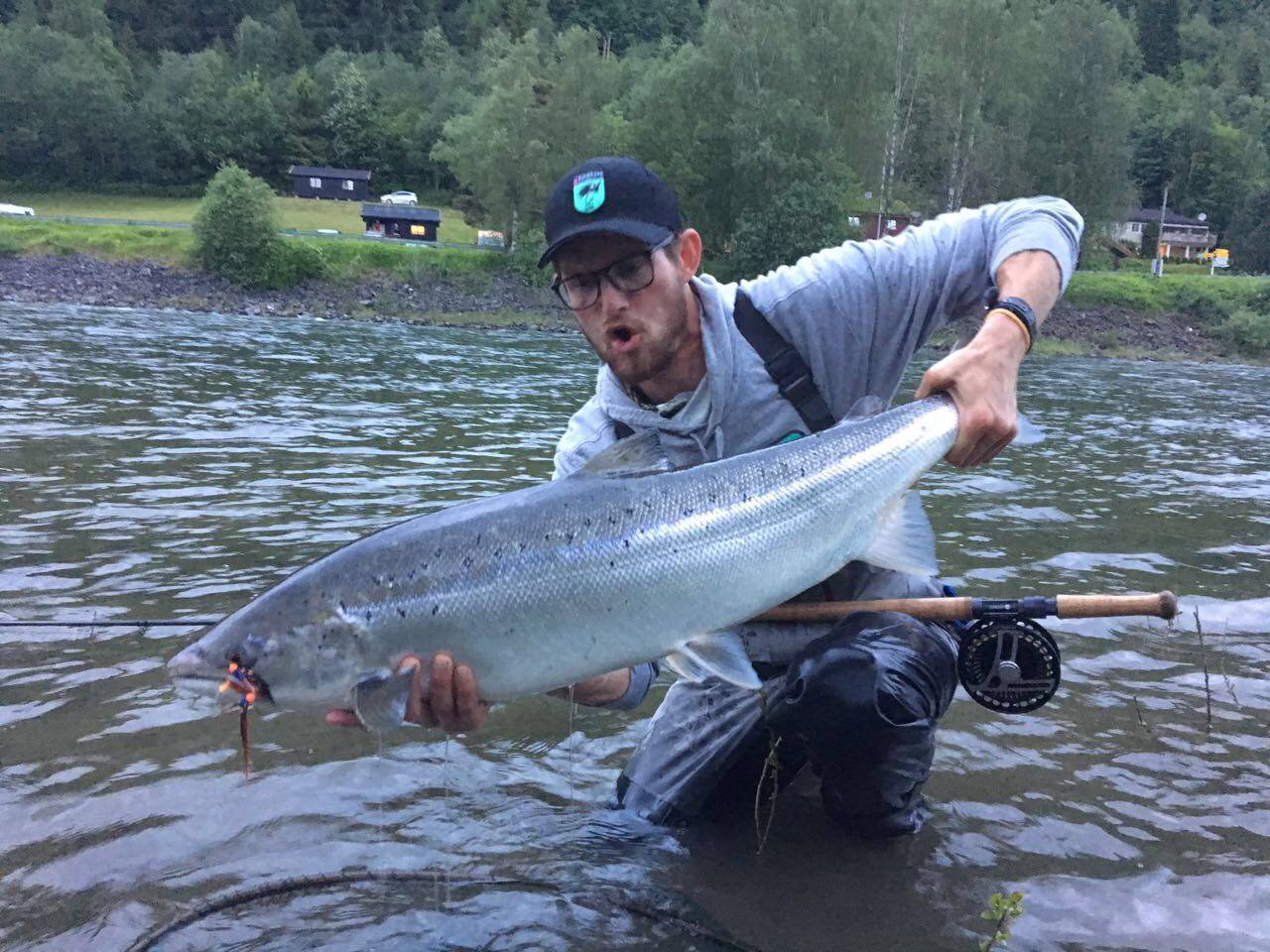 Stephan with his first Gaula salmon from Beat L1 – at the mouth is hanging out the “triple tube fly.

The next morning Stephan fished Beat E2 and perfect conditions and he caught and released another salmon down there, a salmon measuring 82cm. All in all, a great week at NFC! 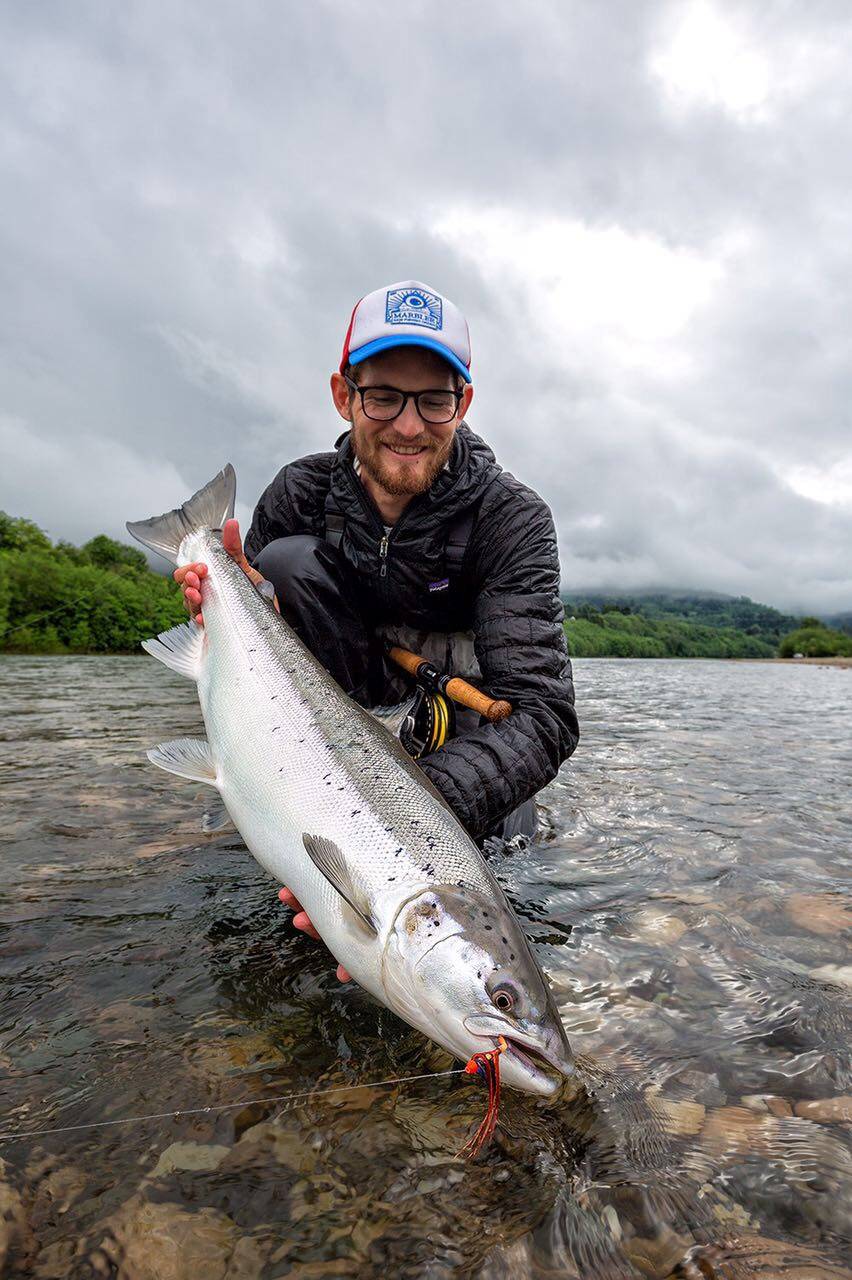 During Sunday the weather changed and it started to rain two days in a row quite hard, The river has swollen up to almost 600kbm at Gaulfossen and got very colored and was mostly unfishable on Monday and Tuesday. Today we are luckily able to fish again, already fish got lost, so we are very positive to get the next catch reports in shortly.