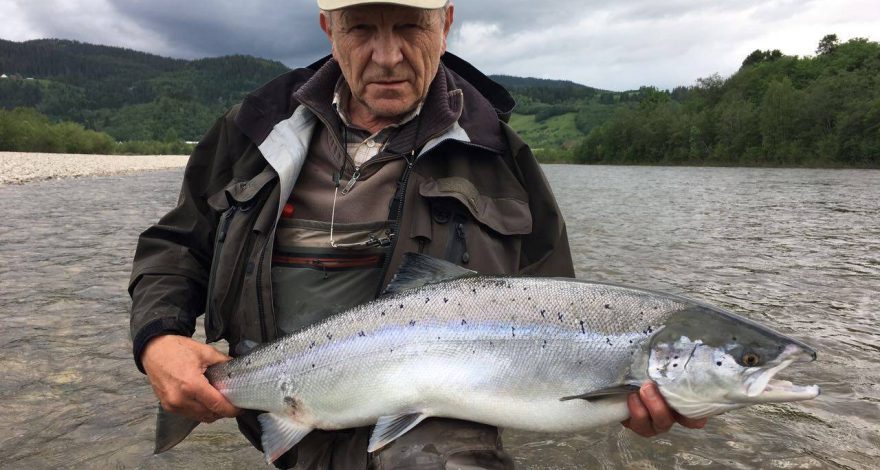 Week 24 and 25: As the high water continues, so does the good fishing, with some great fish caught!

Even though we experienced a nearly constant high water season so far, the salmon have had some short windows to pass the Gaulfossen – opening up the fishing throughout our waters.  This week we began catching fish above the Gaulfoss – great news for all fishermen coming to the NFC in the coming weeks!

The next fish after our last update which was landed on the NFC Beats was caught by our regular Austrian fisherman Franz Hochecker on Beat E2. 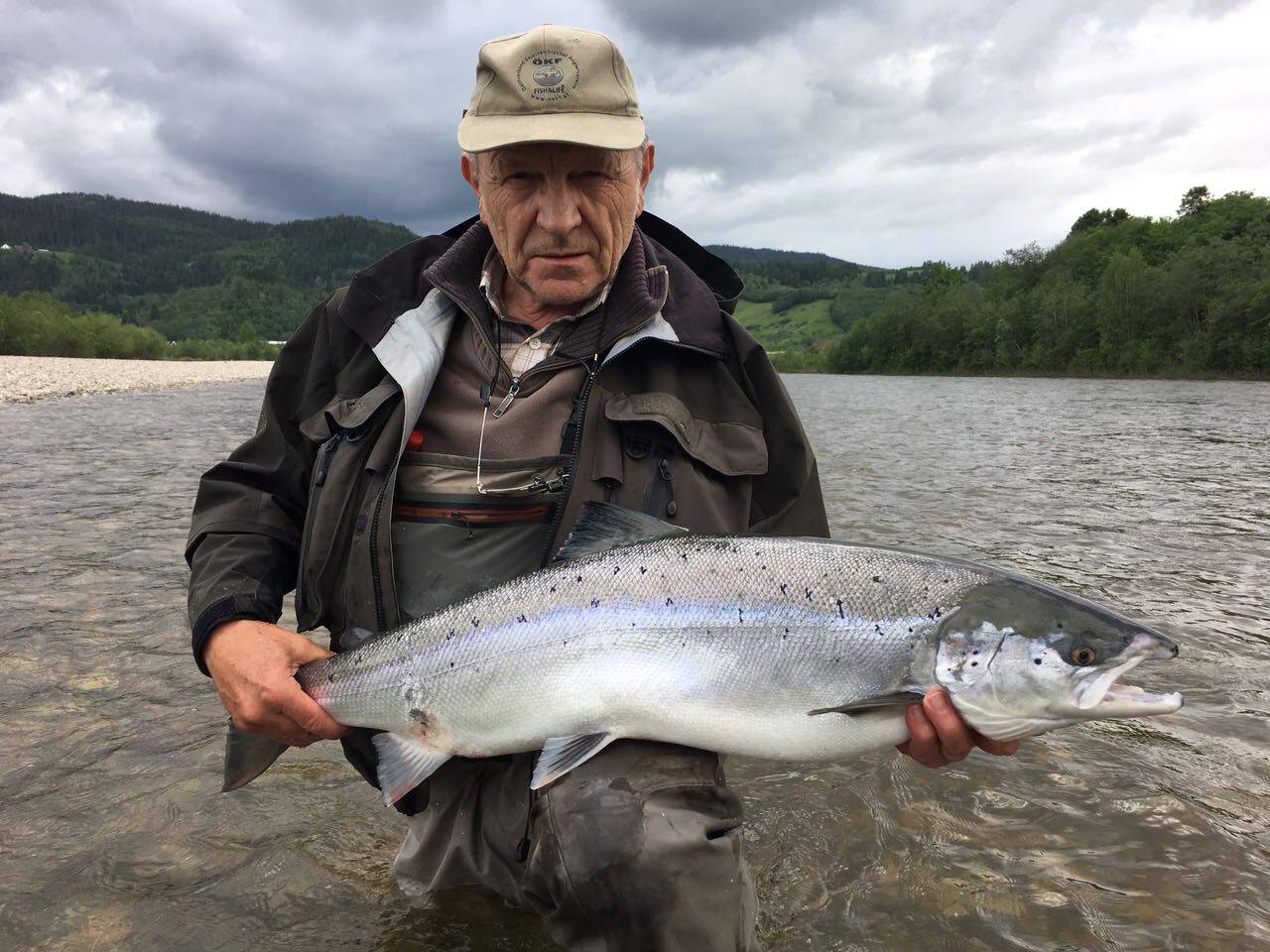 As well as, veteran Gaula fisherman Sven Bechert, who was successful and landed two good fish during his week with us. This one below was the first one from Beat E2. 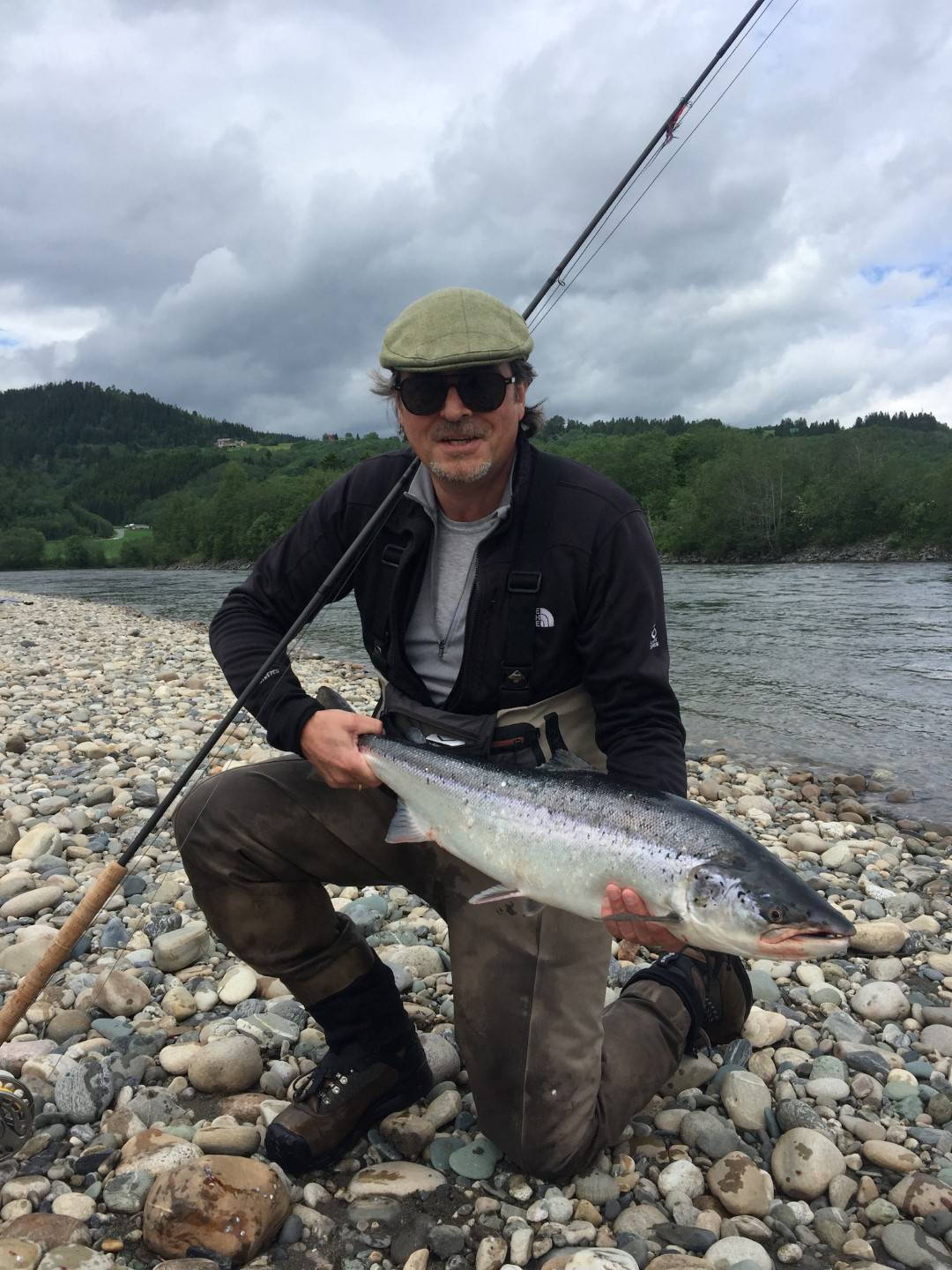 Sven Bechert with his salmon of about 6kg from Beat E2 – the fish has been kept as it was bleeding.

Peter Gadd from the United States was fishing with us for the first time and was able to catch and release his first Gaula salmon as well on Beat E2. 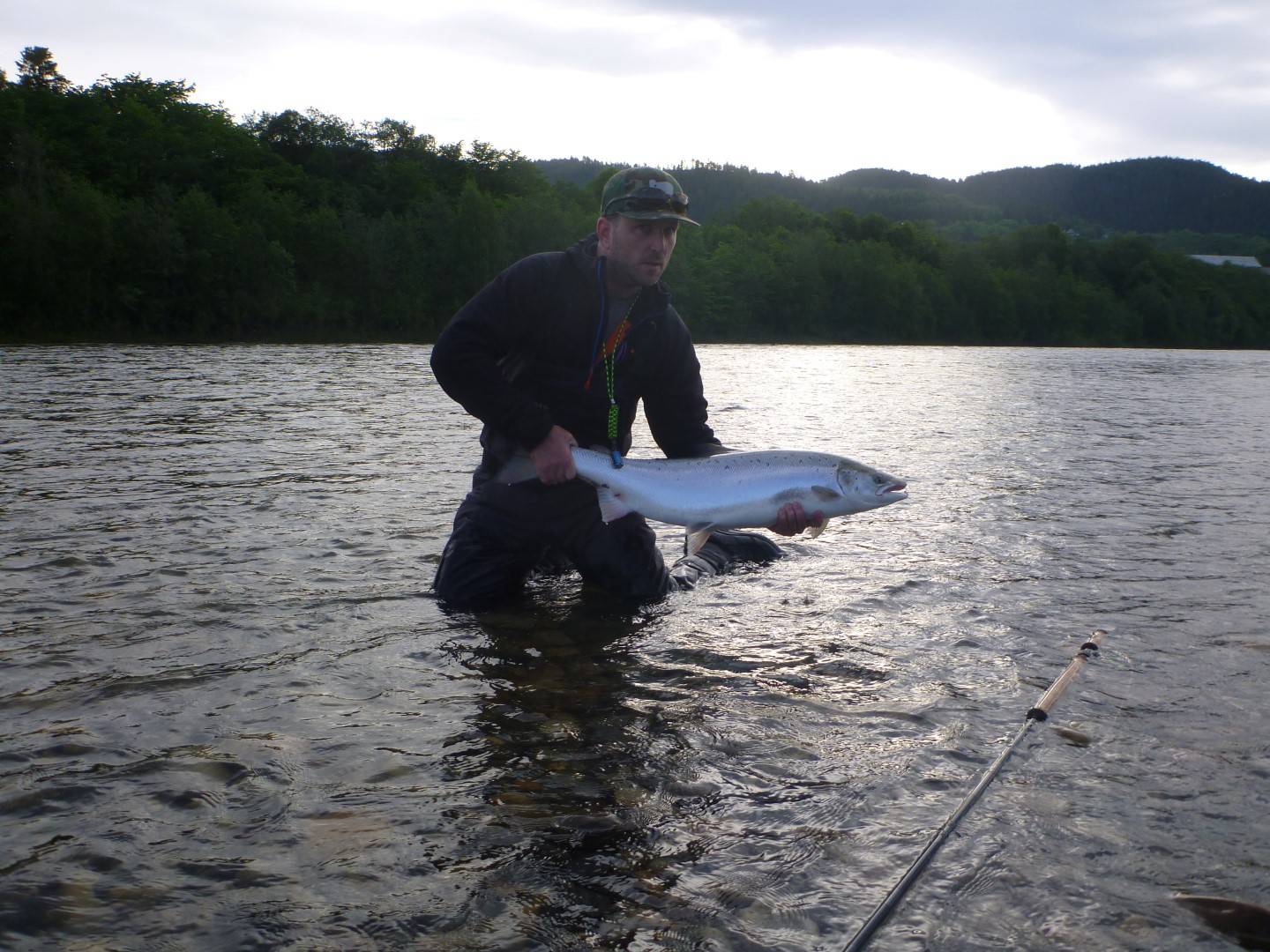 Peter Gadd with his Gaula salmon of about 9kg. 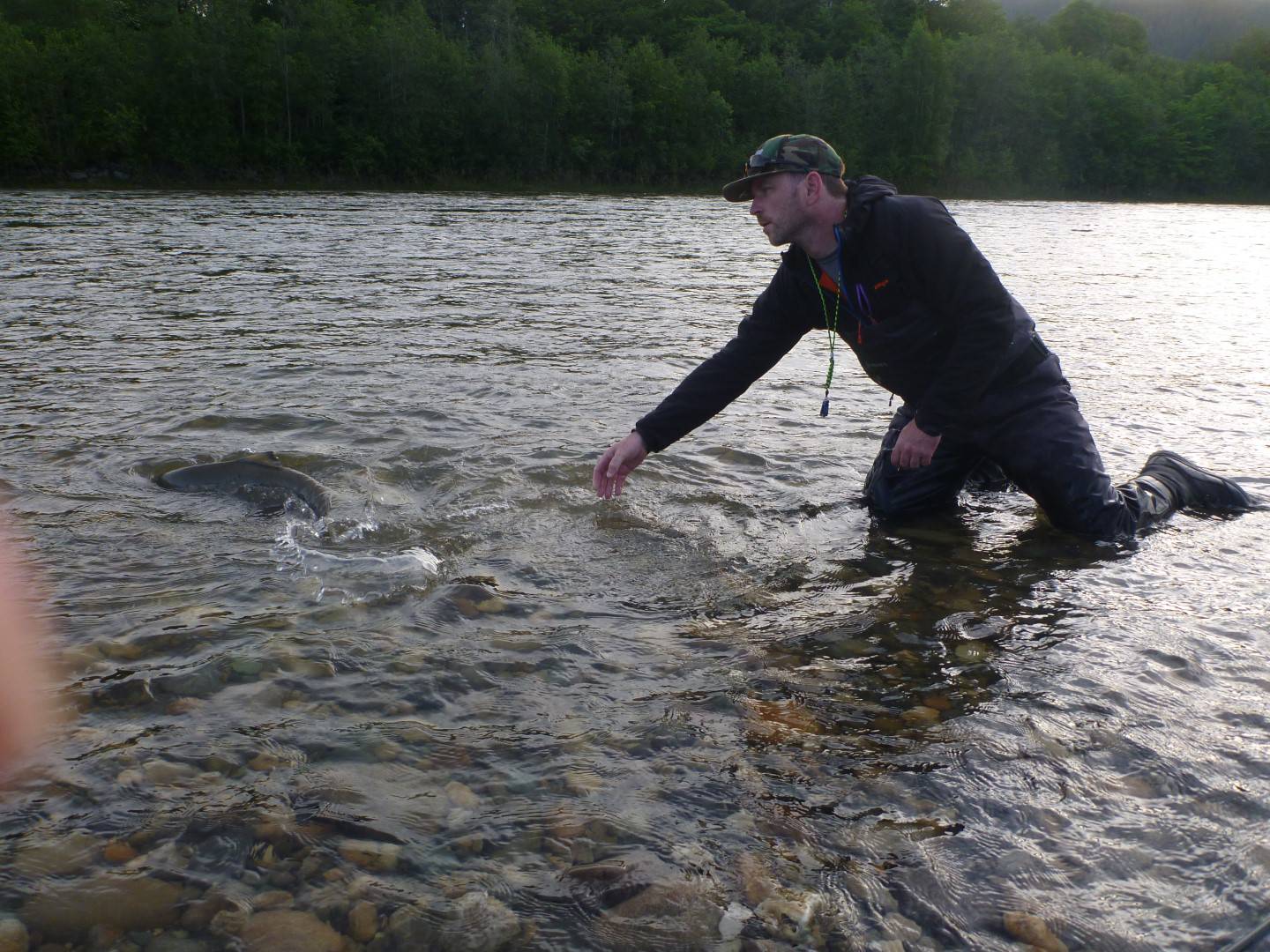 Peter carefully releasing his salmon after a quick lift out of the water, for a photo!

German flyshop owner, Christopher Heiland and his friends have been fishing with us last week as well and caught some nice salmon. 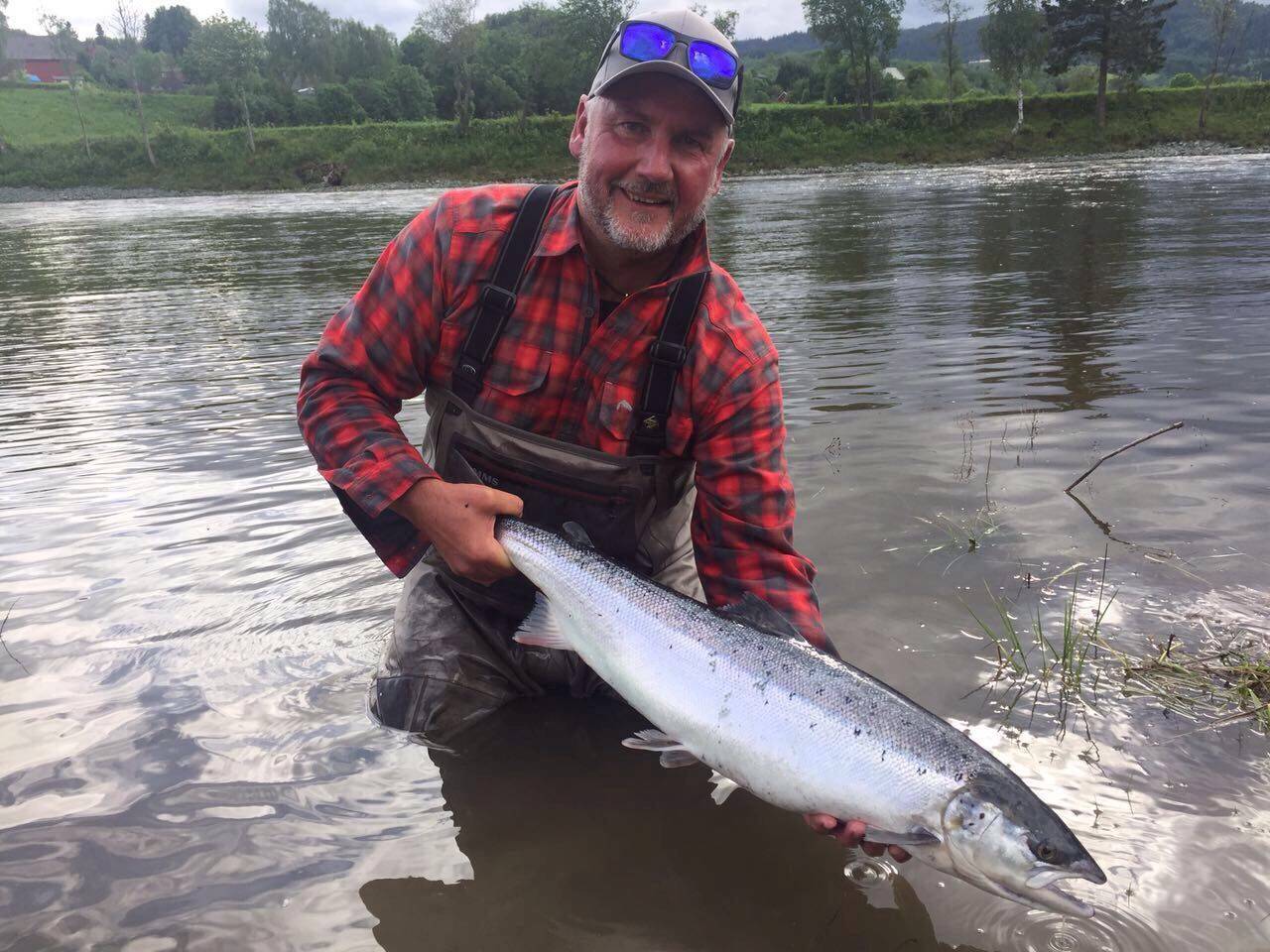 Christopher Heiland with his salmon from Beat E7 weighing 7kg.

Marc-Oliver Eilers was able to land an even bigger salmon just on the other side of the river on Beat E6, a beautiful fish of 9,8kg! 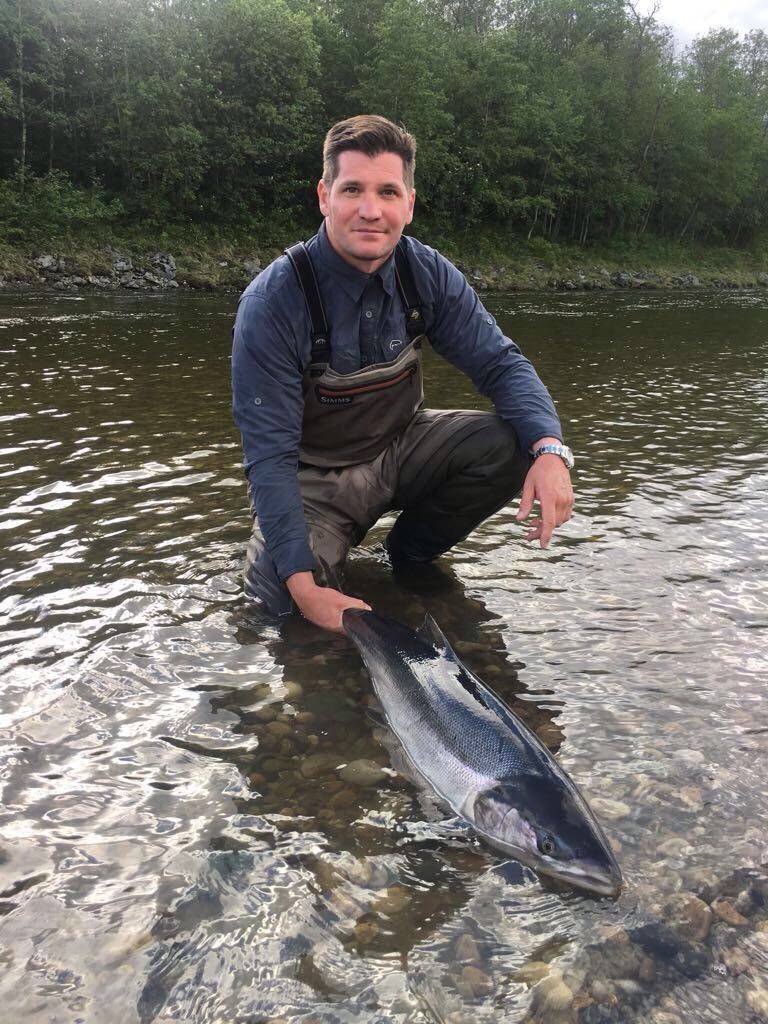 Marc-Oliver with his first salmon ever – quite a fish to start with…congratulations!

Also, Norwegian guest Kenneth Gundersen managed to land two fish during the week, a grilse of about 2,5kg (E7) and another good fish estimated to weigh about 9kg (E2).

On his last evening, Robert Heintschel finished his week with a great fish of about 11kg on Beat E3 after losing a couple before these days – a great ending to his week on the Gaula! 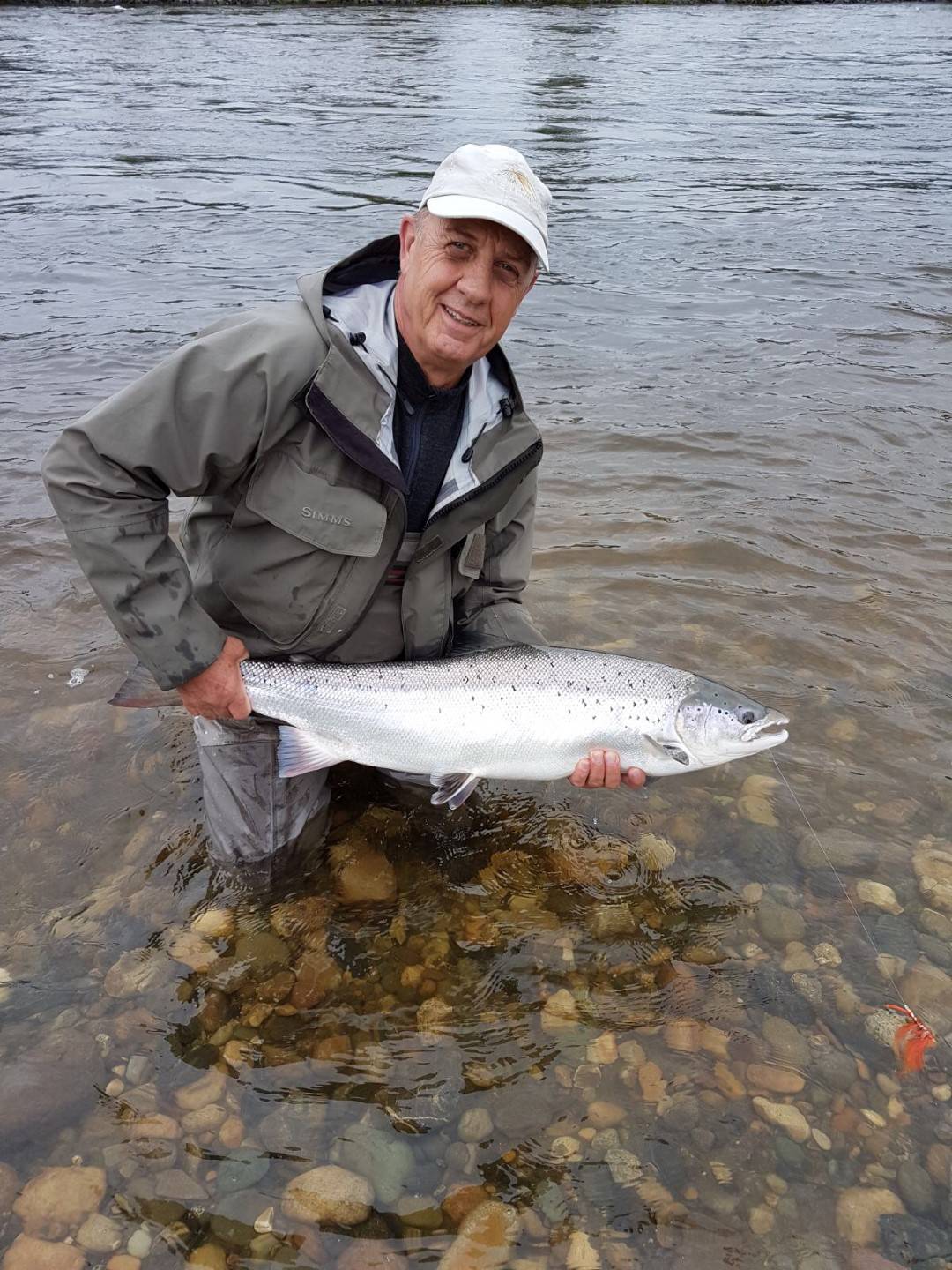 Robert Heintschel with his beautiful salmon from Beat E3, 11kg of dime-bright silver!

This week, we had our French ambassador Fabrice Bergues visiting for his first time this summer. Before the first fishing day was over, Fabrice was able to land and release his first Gaula salmon of the season- also the first fish above the foss- and secure the bottle of champagne for himself! Fabrice managed to catch and release a fabulous 12kg fish on Beat B1. 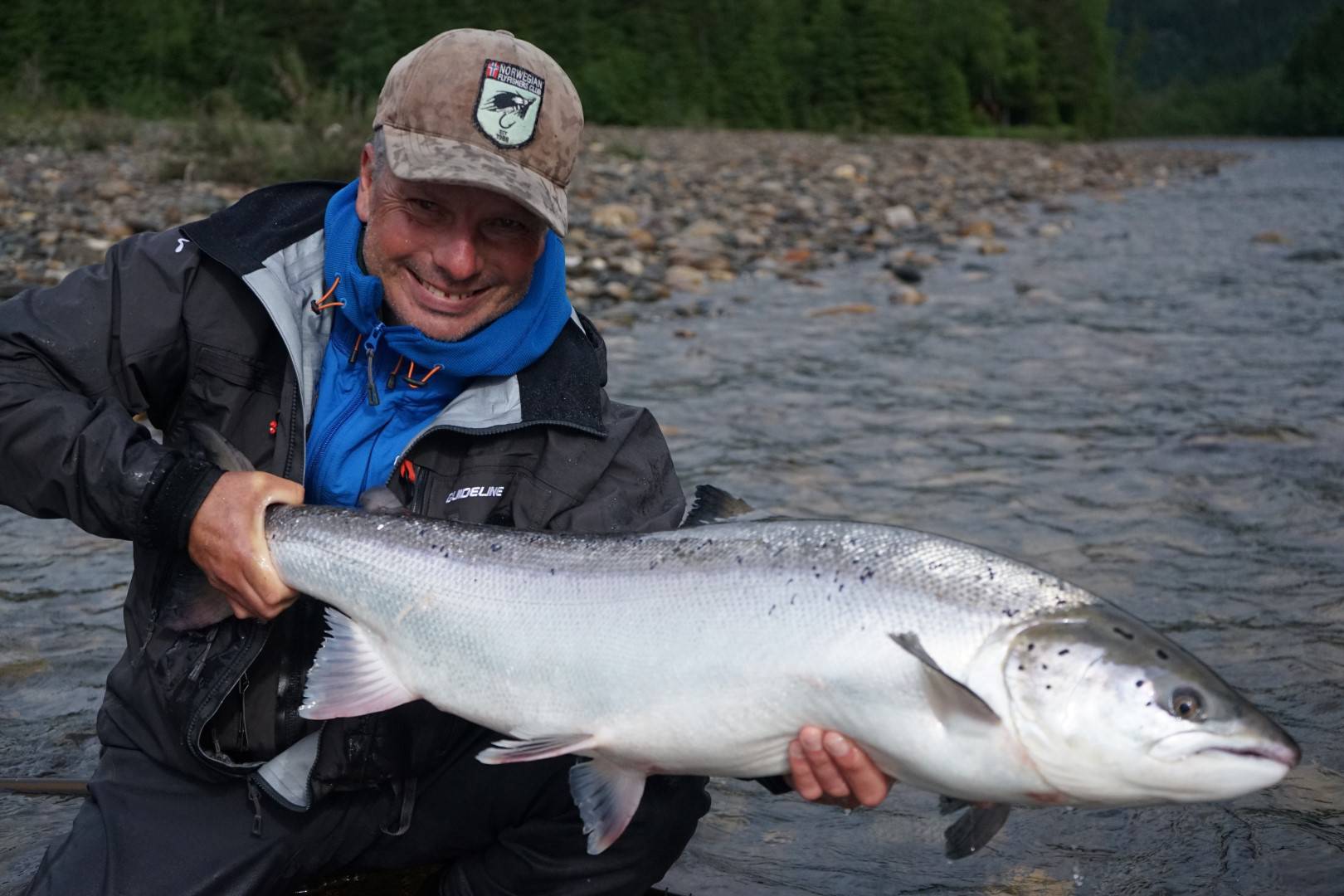 And it seemed as though the champagne only fueled Fabrice’s fire, as his fishing luck continued, and on the same evening he was able to land and released his next salmon on Beat BS2, estimated to weigh about 5,5kg. 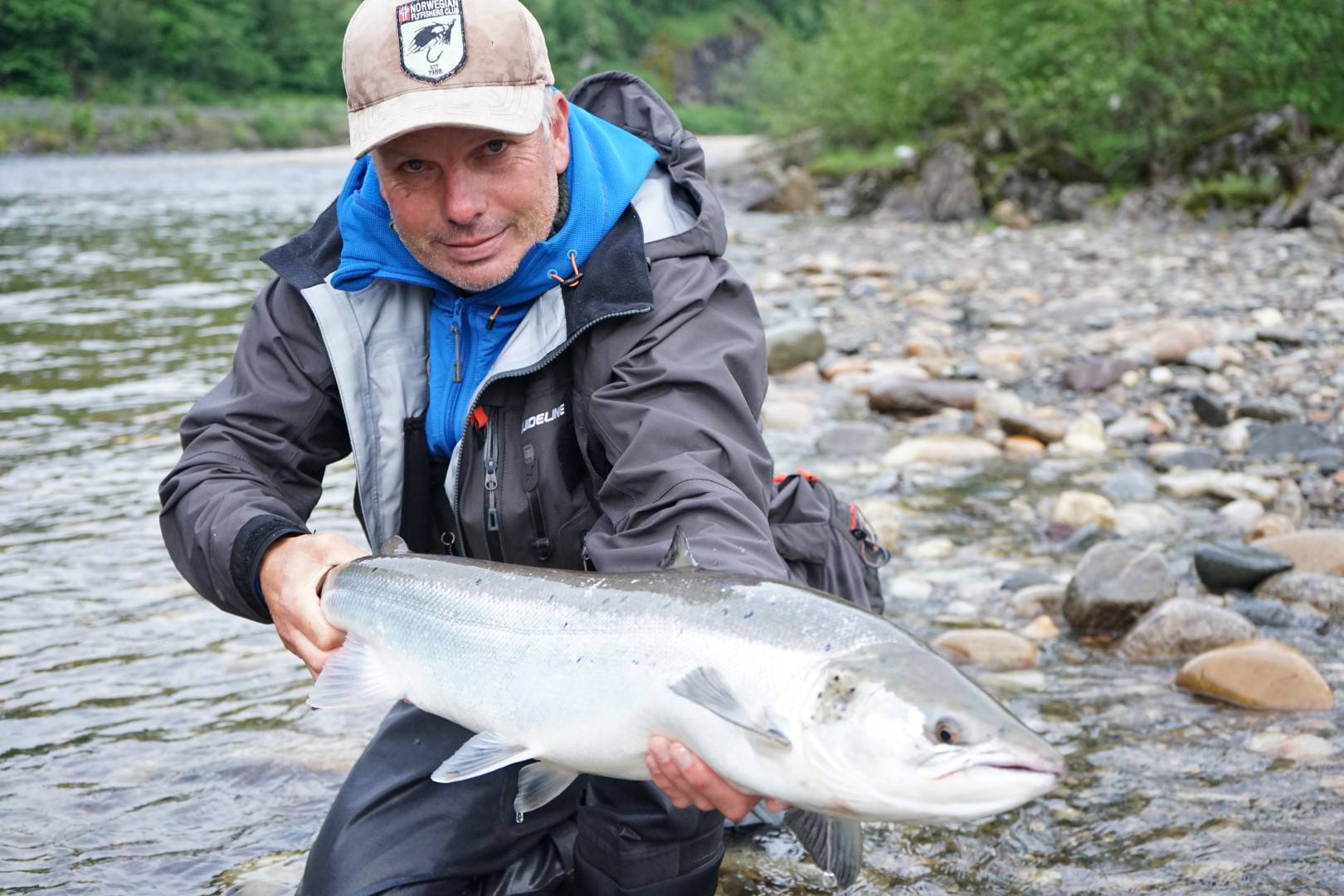 Fabrice with his 2nd fish of the day at BS2. 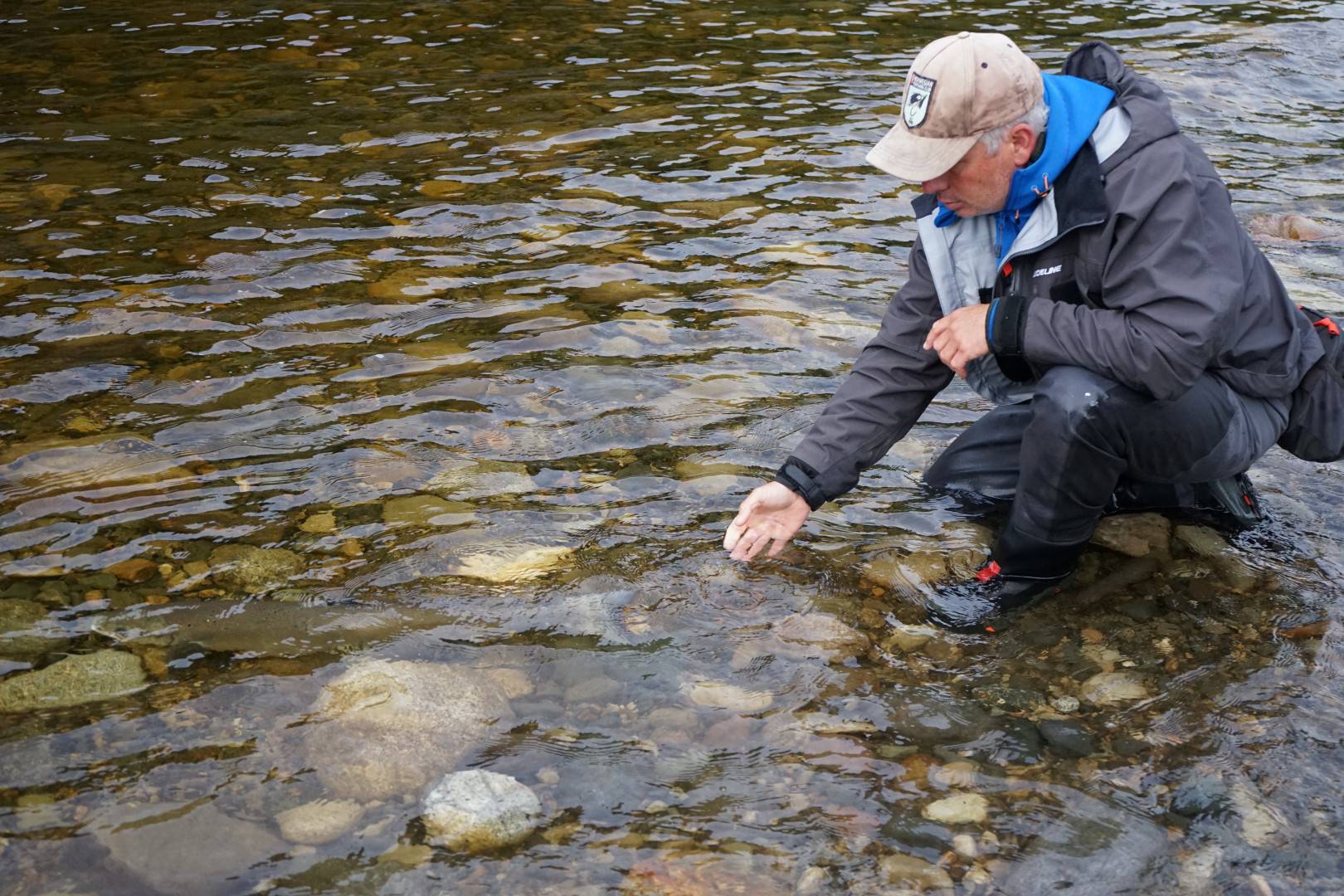 It seems as though perhaps Fabrice’s luck rubbed off, as on the next day he and his fishing partner Yann Russon were fishing Beat BS1 and was both able to catch and release each a 10kg salmon – incredible! 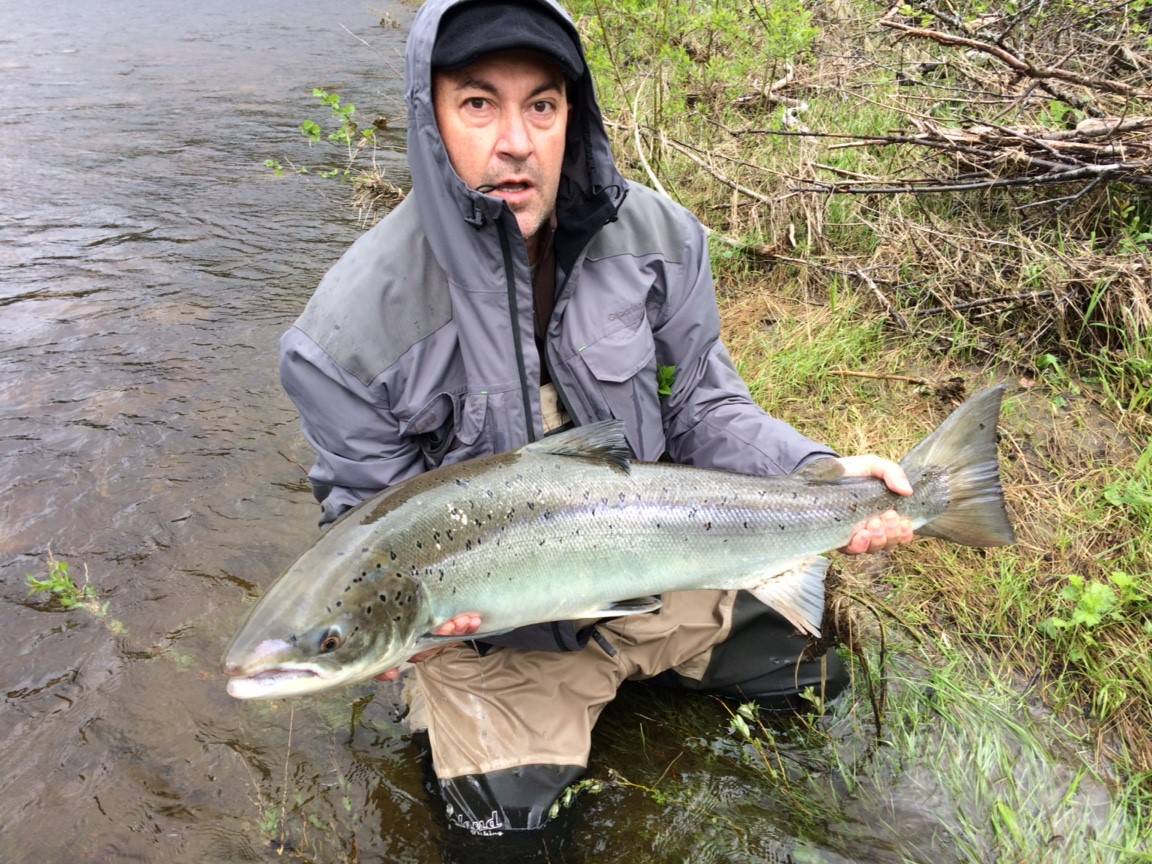 Yann Russon with his big fish from the session on BS1. 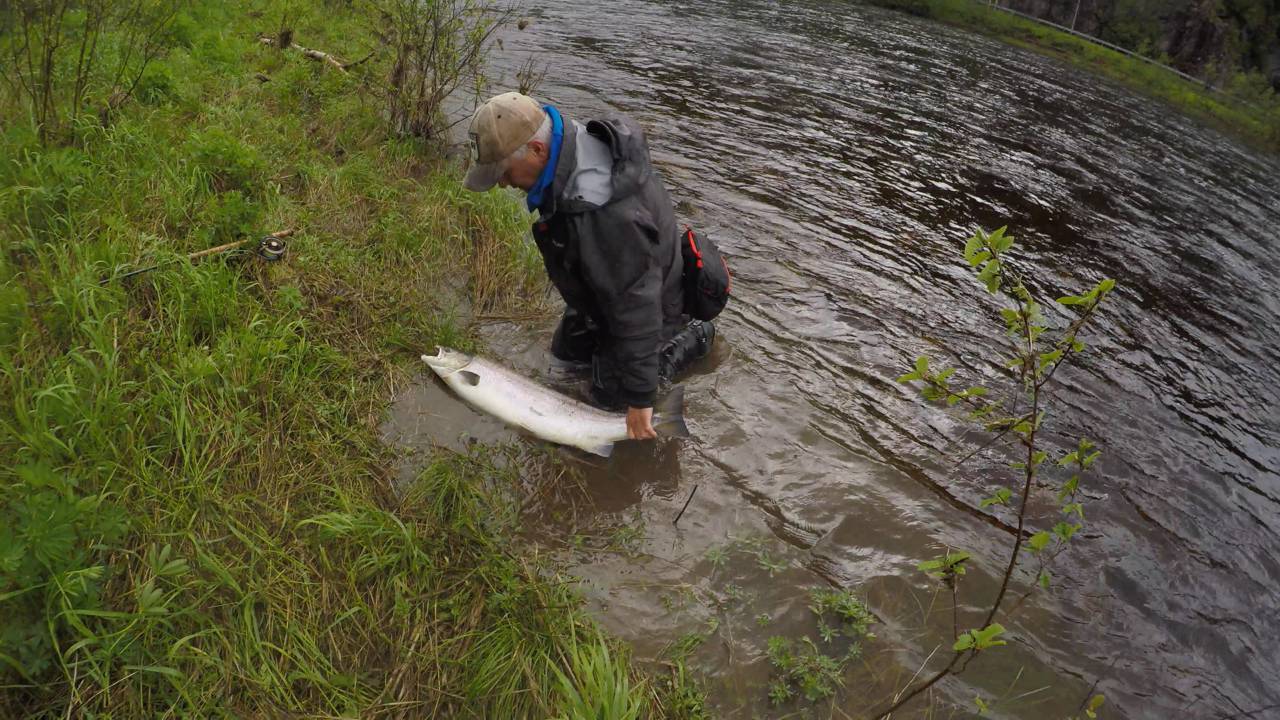 And again, during the evening Fabrice caught his next salmon! Another 10kg fish, this time from New Pool (A1). He just seems to be a fish magnet these days…. 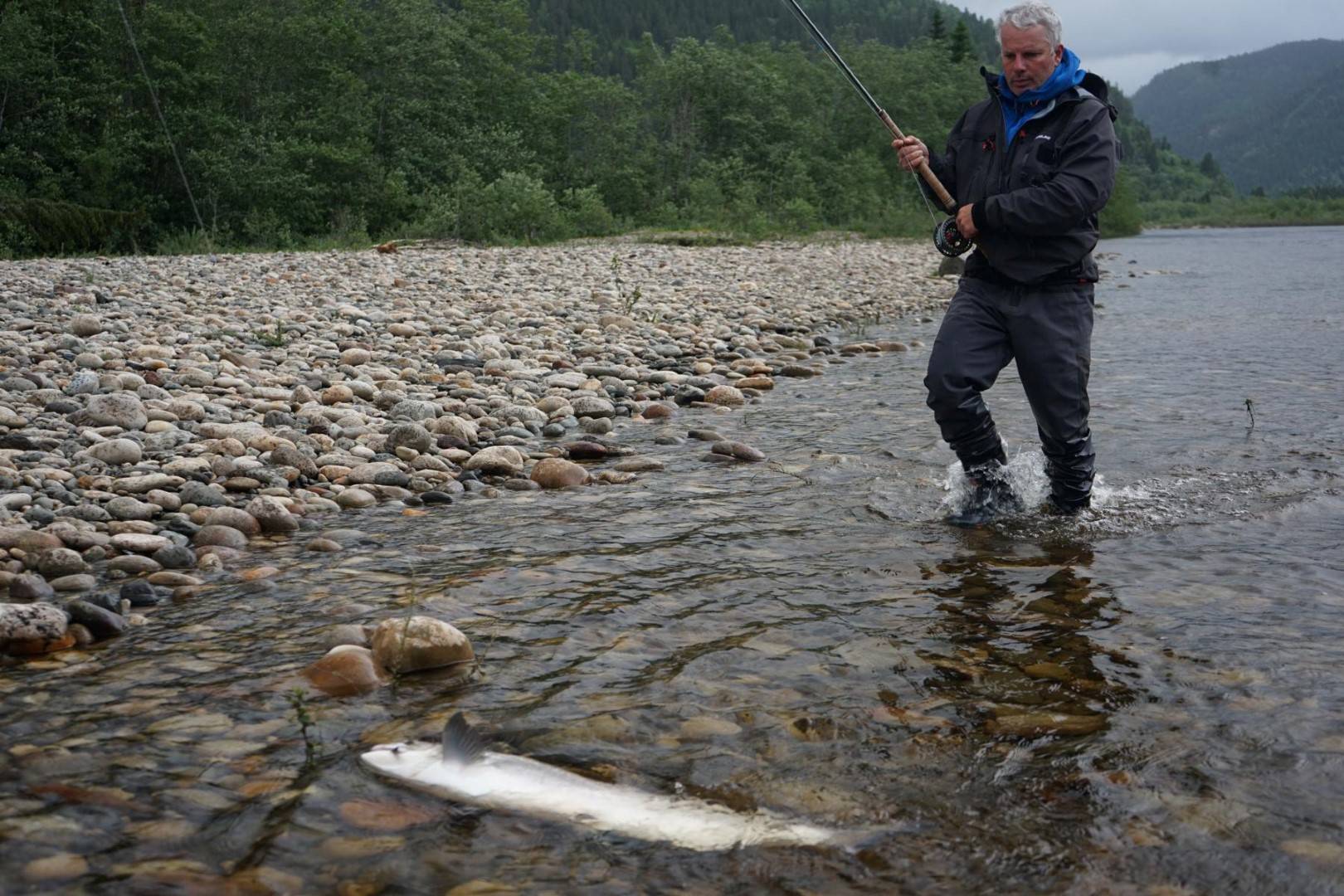 Fabrice landing his nice salmon on Beat A1.

But it was not only the French who had luck, as NFC regular Johann Bstieler was able to catch and release his first salmon of his stay, a good fish of about 6,5kg from Beat BS1.

Manfred Raguse managed to land his first salmon above Gaulfossen on Beat A1, a good fish of 104cm and weighing in with 11,1kg. Unfortunately, Manfred was unable to release the fish, as it was bleeding a lot. 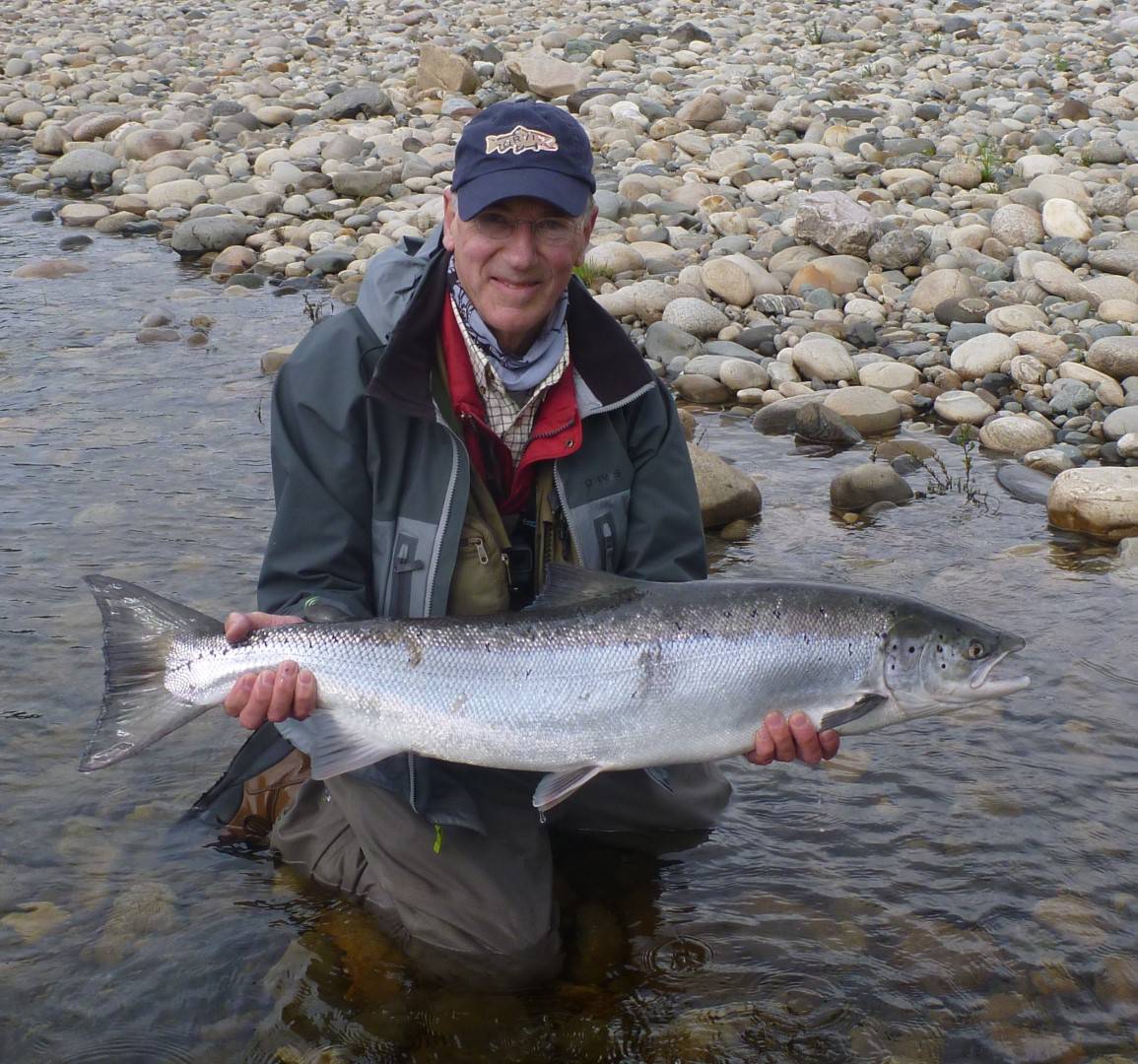 As well as, French fishermen Gilles Hirogyen, who landed a great fish of 11kg from Tilseth Pool (Beat C2) – the first one from that Beat this season. This picture will follow.

As we write this, it appears the fishing is even better upstream of the Gaulfossen these days than down river. We have seen quite a good number fish moving in many of our pools, and the water level continues to drop constantly again right now, down to a level where the next fish should be able to pass Gaulfossen – that means we should expect some great fishing upriver these days to come.

It is a super exciting time right now- We will keep you updated!