Week 28 was another week with a lot of rain and very high water levels, the river came up, dropped and came up again right away after a lot of rainfall. But the fish did not seem to mind the rain, and fluctuating river, as the week was filled with many great fish, including the largest fish of the season thus far for the NFC!

July has been a rather untypical summer month on the Gaula, with lots of rain, and cold temperatures. Either way, the fishing has been great. Week 28 started with a fish for Takeo Osawa on Beat E2 – a nice fish about 5kg. 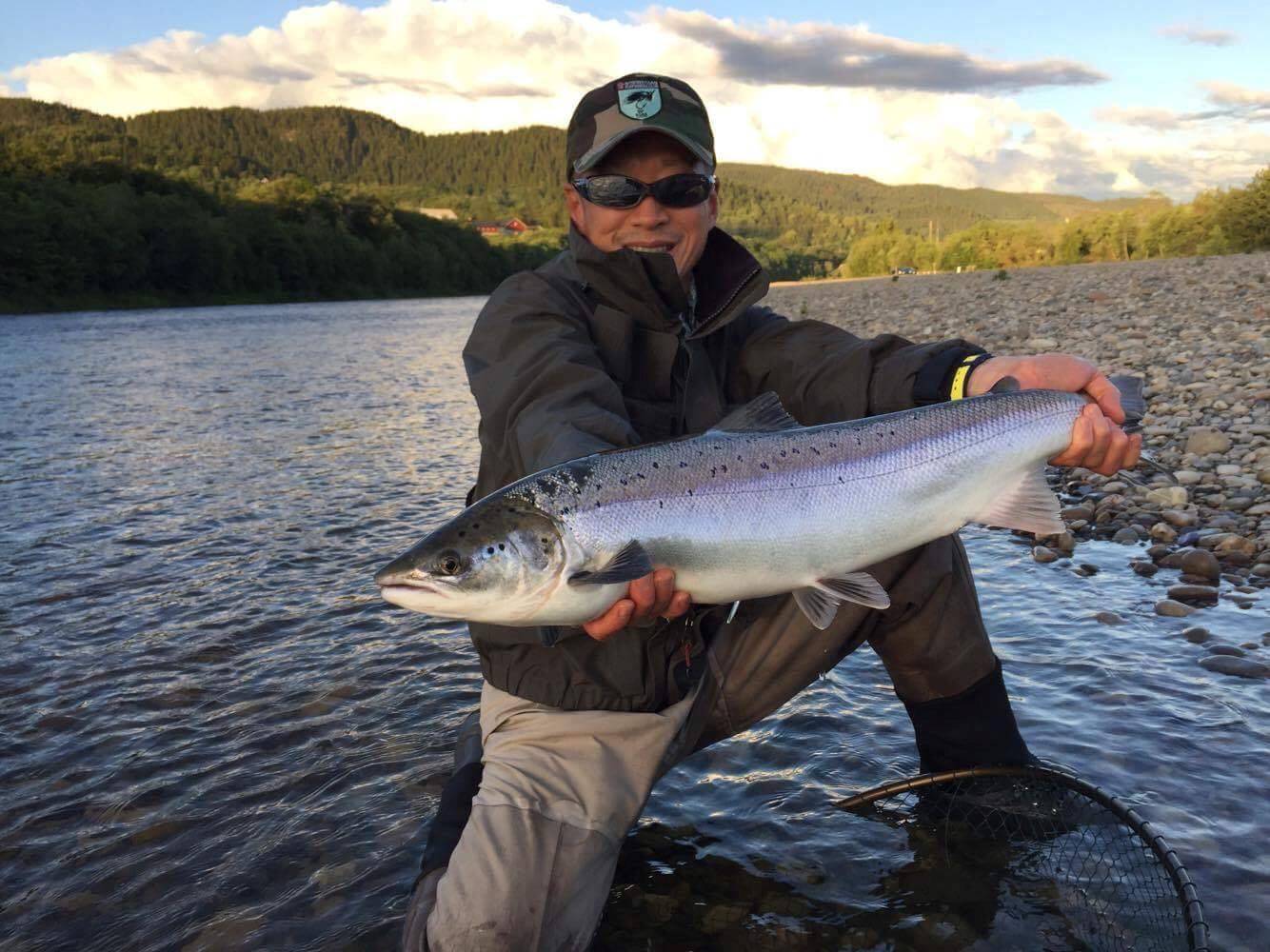 Takeo Osawa with his “week-opener” on Sunday night down at E2.

The next morning was a good day for our French regular Eric Sovran. As he was able to catch and release a very big fish on Beat BS1. His salmon measured 114cm and was estimated to weigh about 15kg (33lb)! 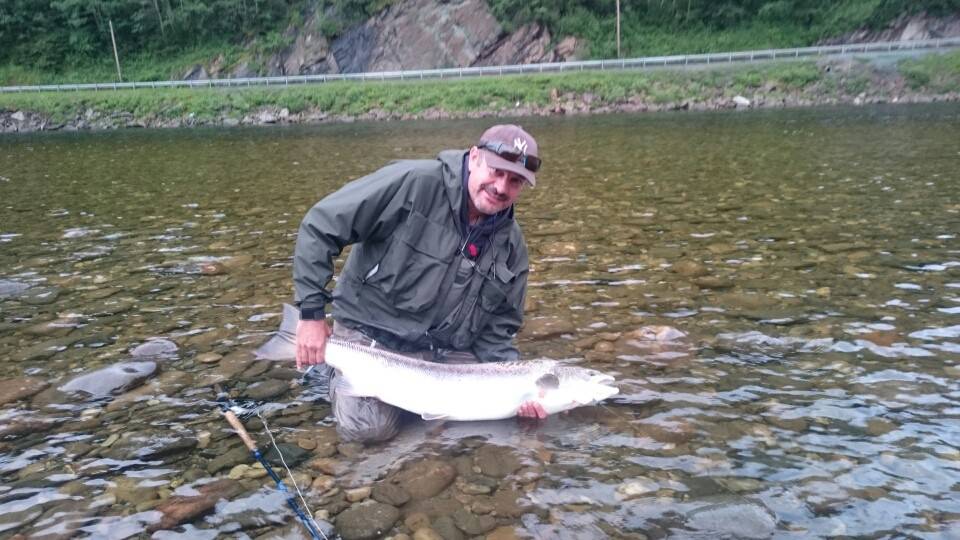 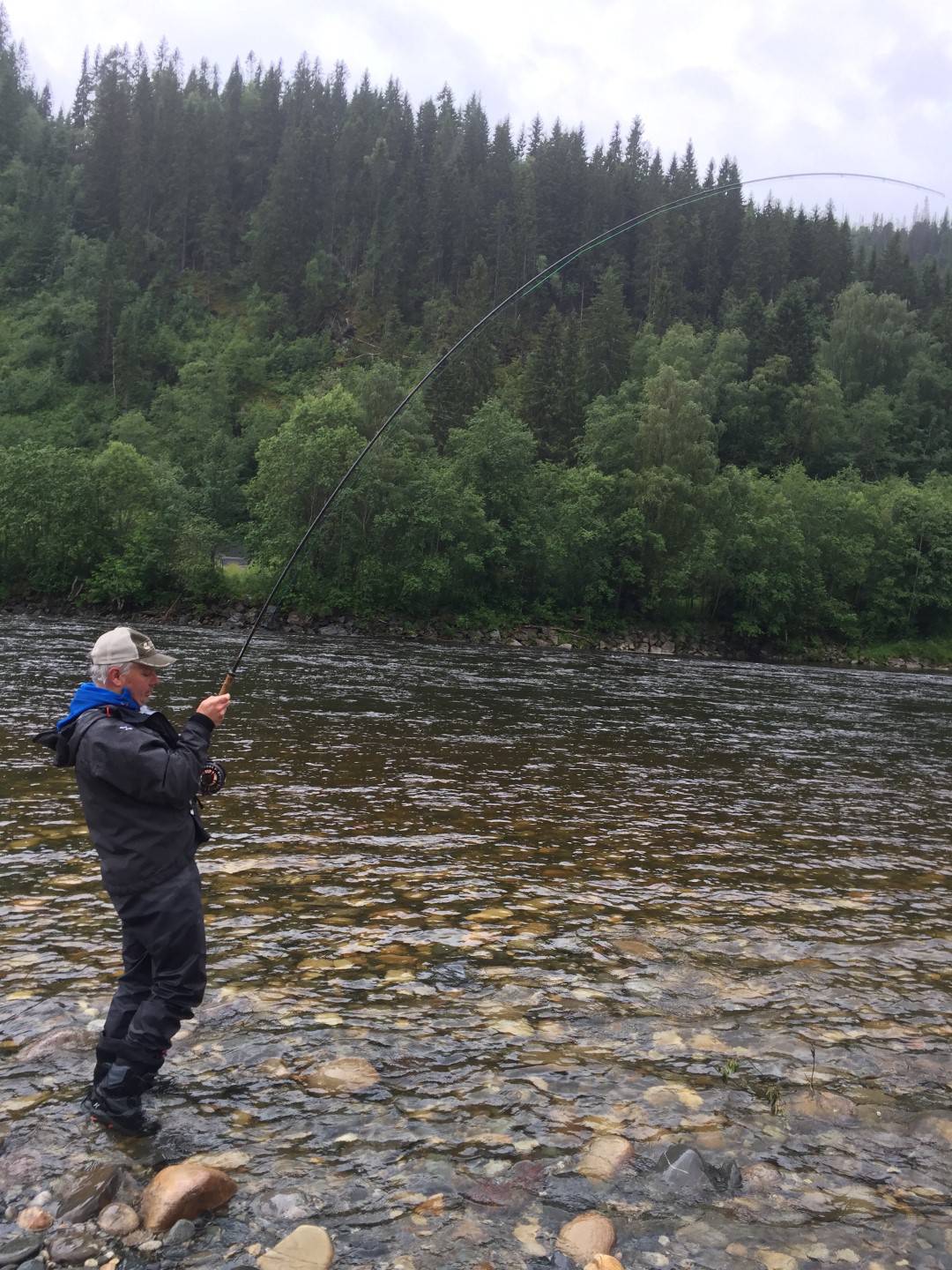 Fabrice in action on Beat B1. 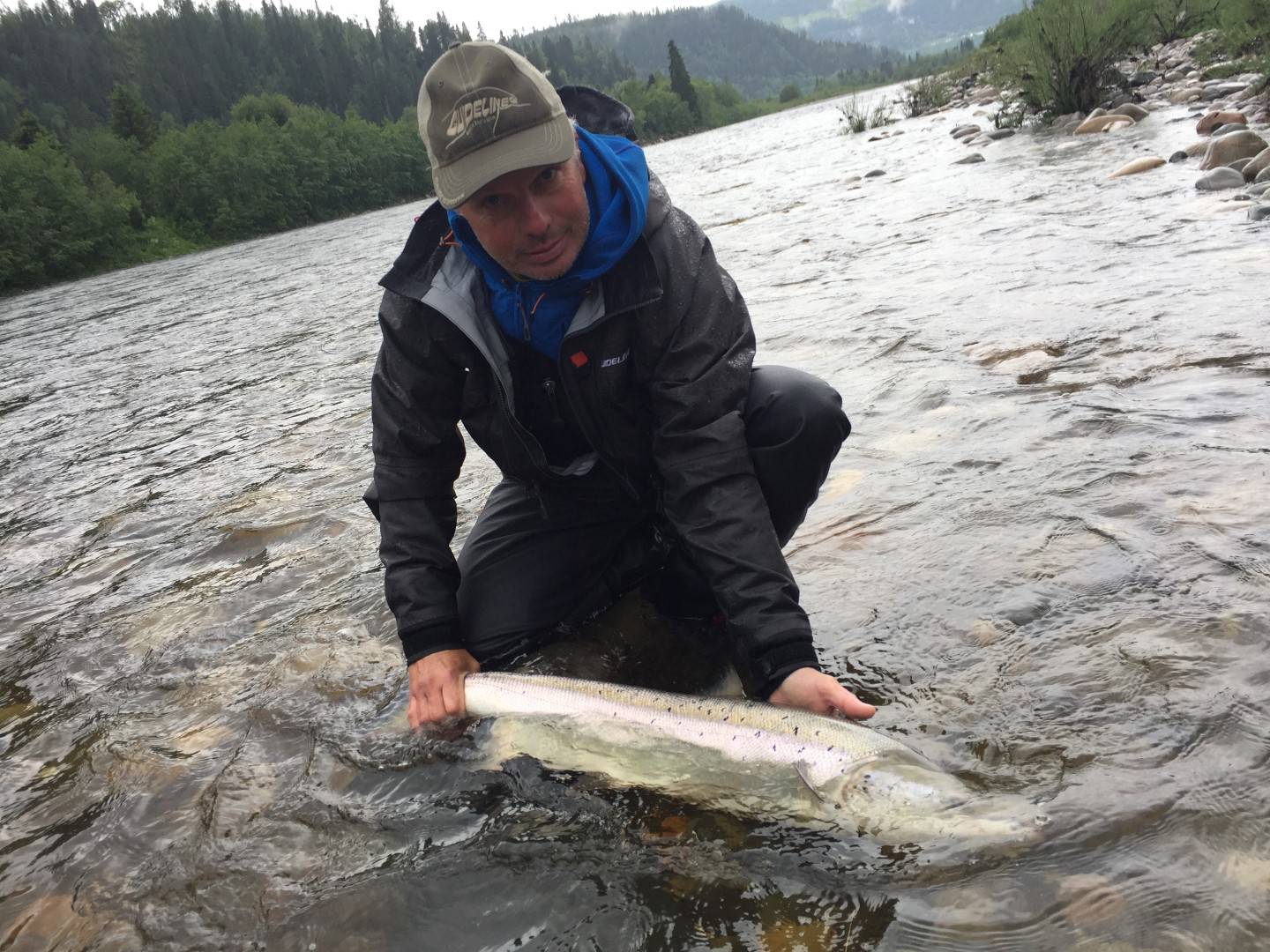 Fabrice with his fish of 94cm from Beat B1. Held carefully in the water prior to release. 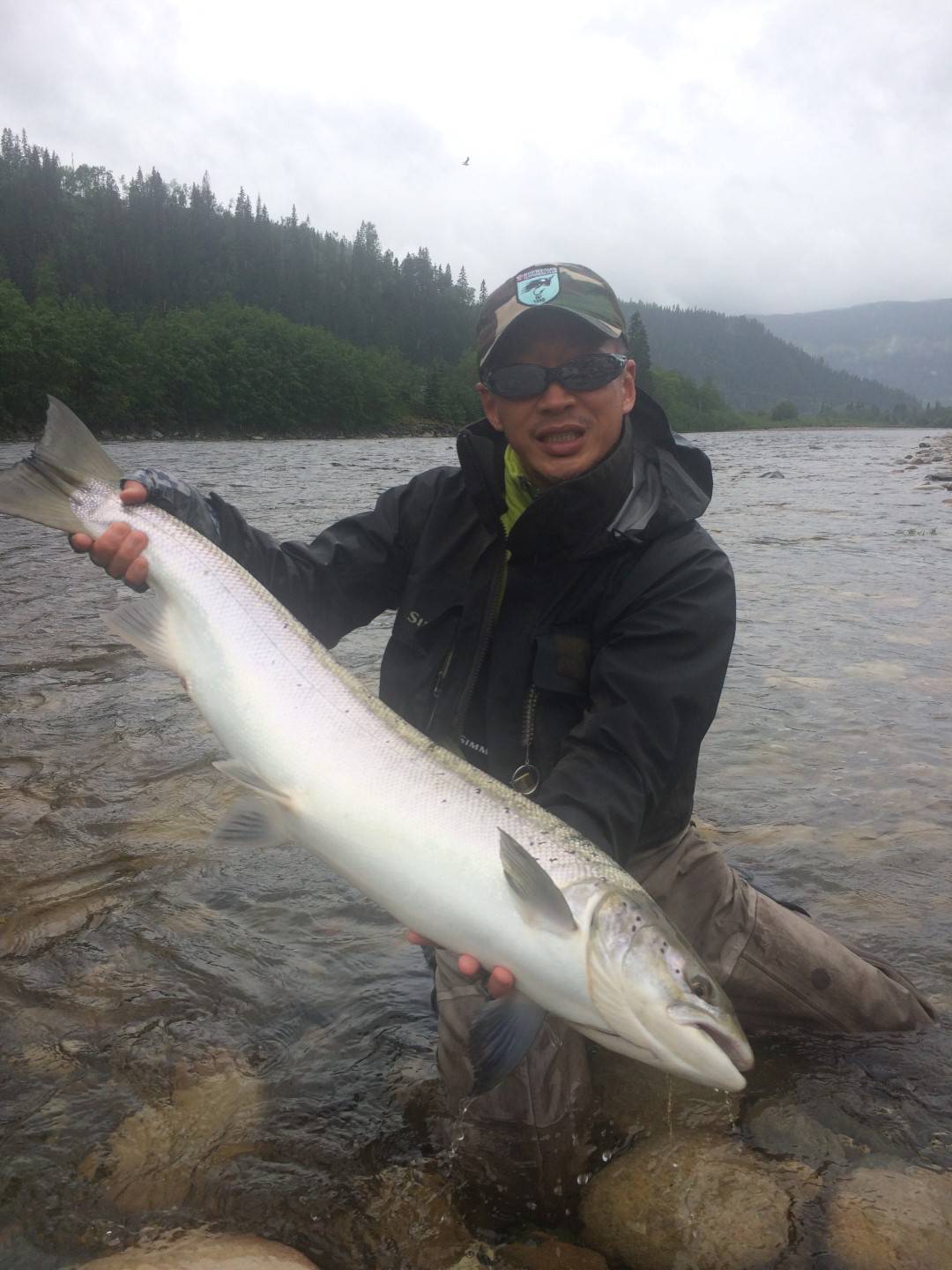 Takeo with his good salmon of about 7kg (15lb) from Beat B1.

The week continued with high water levels, as the river yo-yoed between rising and dropping levels, so the conditions were not easy but the fishing remained good throughout the week.

As the levels pushed the fish around, and new fish entered into the pools, Eric Sovran caught his next salmon of 86cm. As well as some seatrout which were landed by Hans E. Wolff and Fabrice Bergues, not huge ones but about 2-3kg (4.5-6-5lb) and simply beautiful. 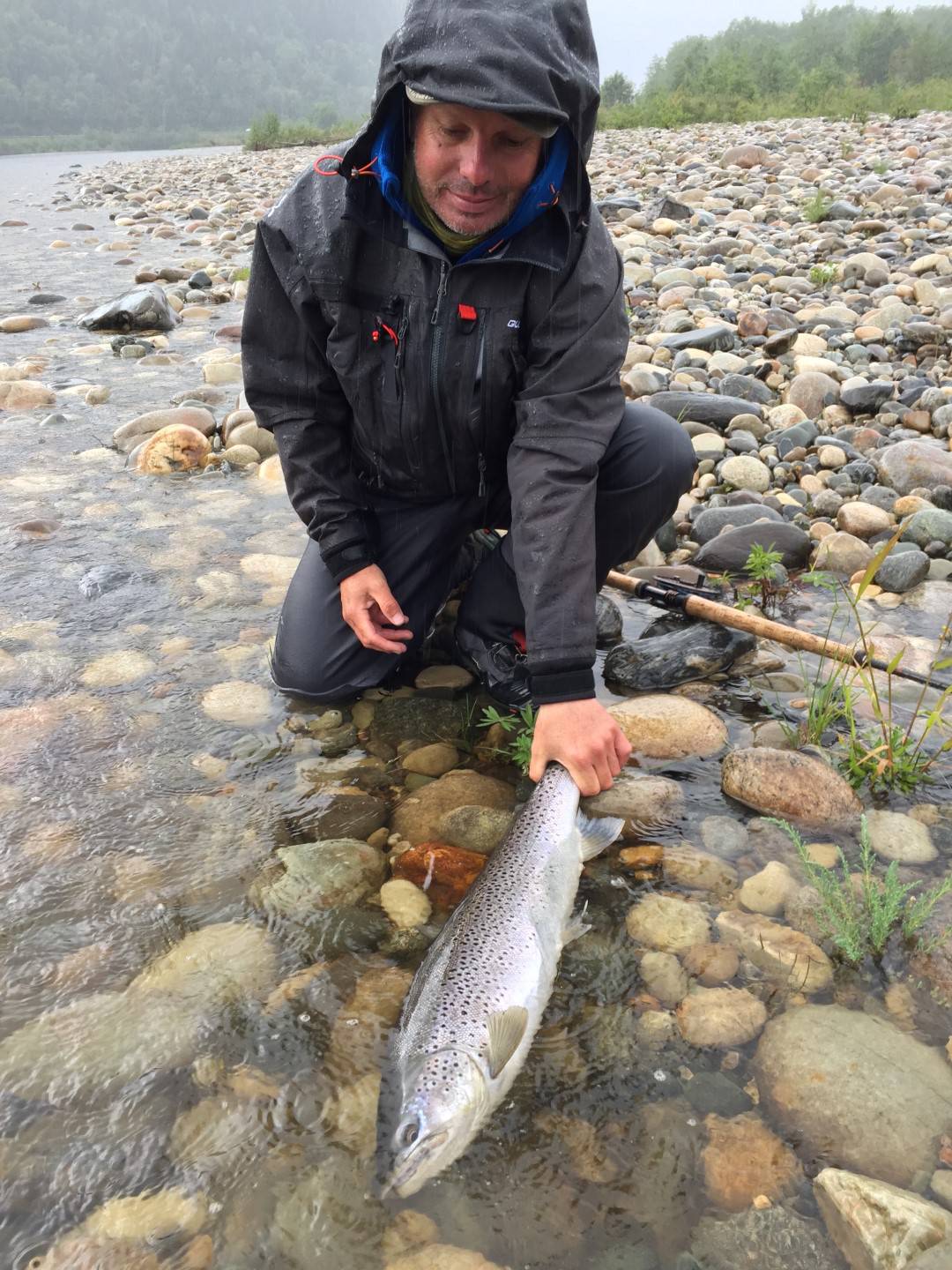 Fabrice with a beautiful seatrout. We are pleased to see some better sized sea trout.

German regular Werner Brinker caught two nice fish on Beat BS2, one salmon of about 5kg (11lb) and another big fish measuring 102cm and weighing 11kg (24.2lb). On the same day his friend, and fishing partner, Hans E. Wolff managed to catch a big fish of 10,5 kg (23.1lb) in our Lodge Pool. The following day Hans caught another big fish of 98cm, sadly it was bleeding and had to be killed. 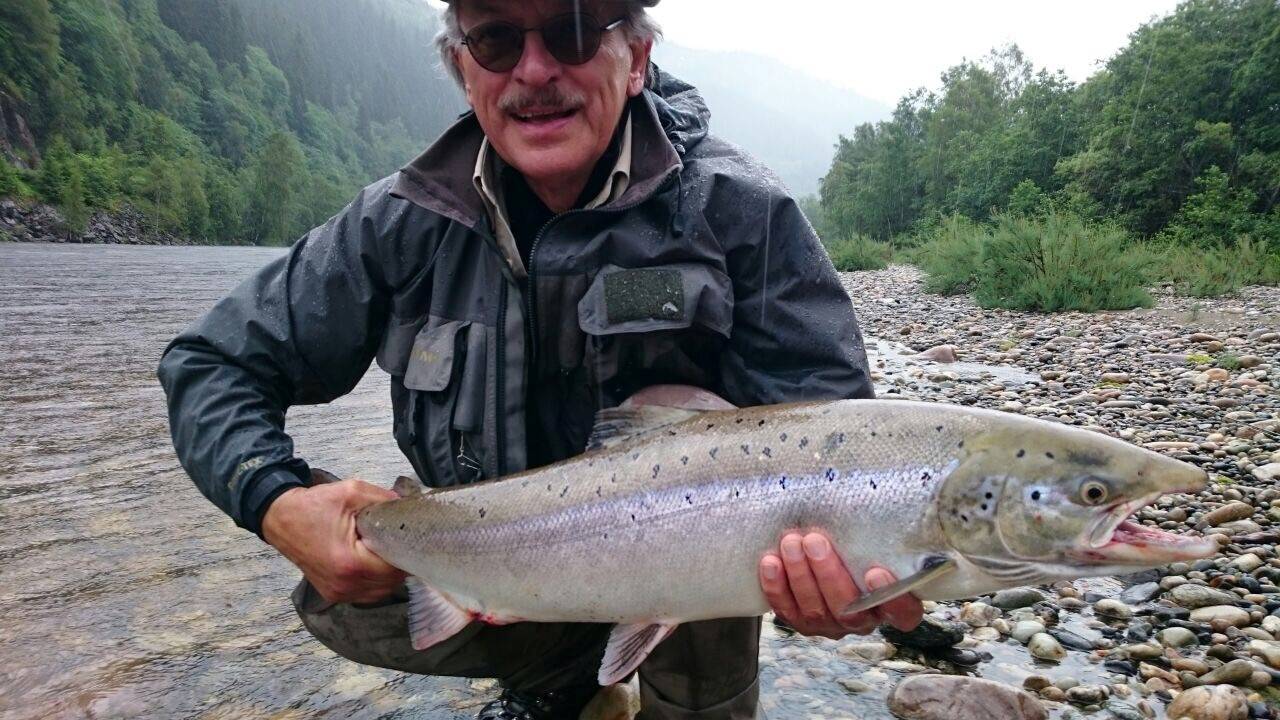 Francois Truffandier caught the next good fish from our Lodge Pool, a nice 7kg (15lb) salmon which was carefully released.

Early the next morning, NFC’s Mawill Lüdenbach had the chance to fish our Beat A1. After having two takes, and changing the fly, he finally hooked into a good fish. After a hard early morning battle Mawill was able to catch and release our biggest fish of the season so far!! A great male salmon of 117cm and estimated to way 16,5kg (36-37lb) but by the look of it the fish could weighed even more!! Regardless, this was a fish of a lifetime, and well deserved – congratulations Mawill! 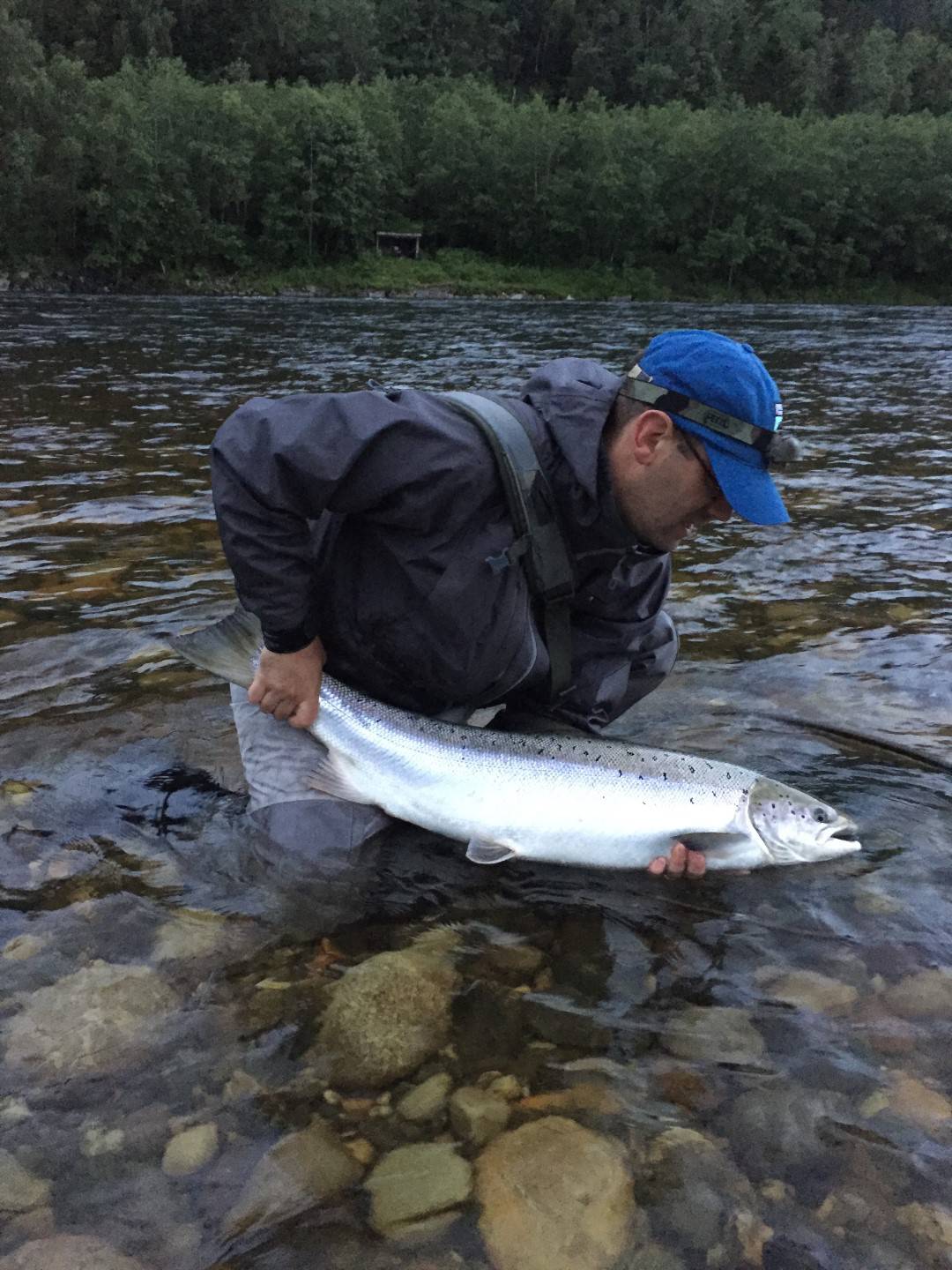 Eric Soule with his 97cm female salmon – C/R of course.

Many more grilse have been landed by Fancois Deloup, Fabrice Bergues, Sacha Pütz. Fabrice also managed to land a good fish of about 7kg (15lb) at Beat A1. 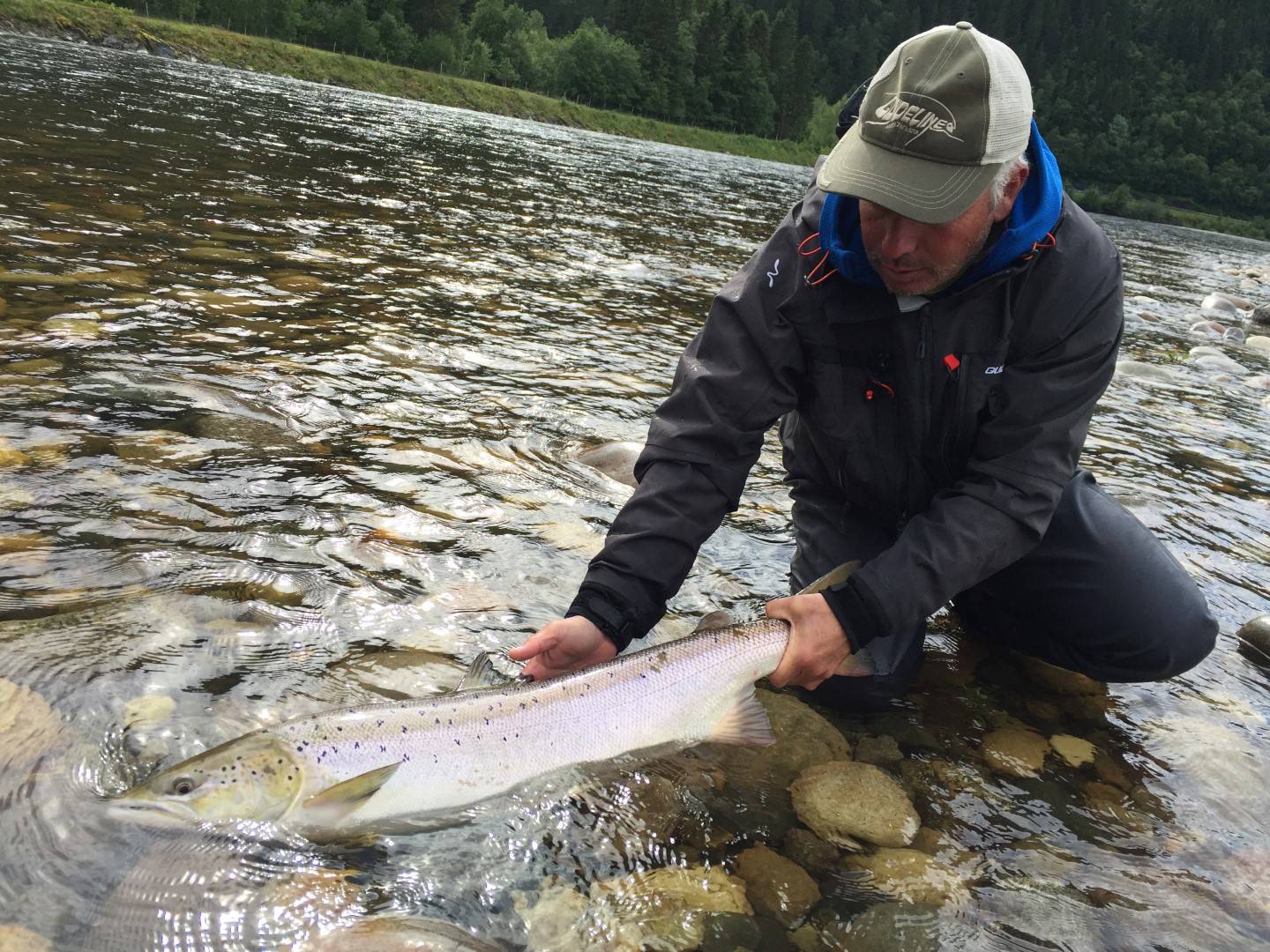 Fabrice about to release his salmon on Beat A1.

Another funny story happened this week – we got a call from Alex Pearl from the US. He arrived with the Hurtigruten cruise ship in Trondheim and had  a couple of hours to fish for salmon. We were able to make last minute arrangements to pick him up and get him fishing for a few hours on our E-Beats. Guided by Mawill, Alex arrived and after a short lesson on double hand casting, made few casts and hooked into 2 fish within 20 min, shortly later he hooked into the next one – this time it was hooked well, and Alex was able to catch and release his first Gaula salmon – approx. 5kg (11lb) and 80cm. Isn’t salmon fishing easy!?! 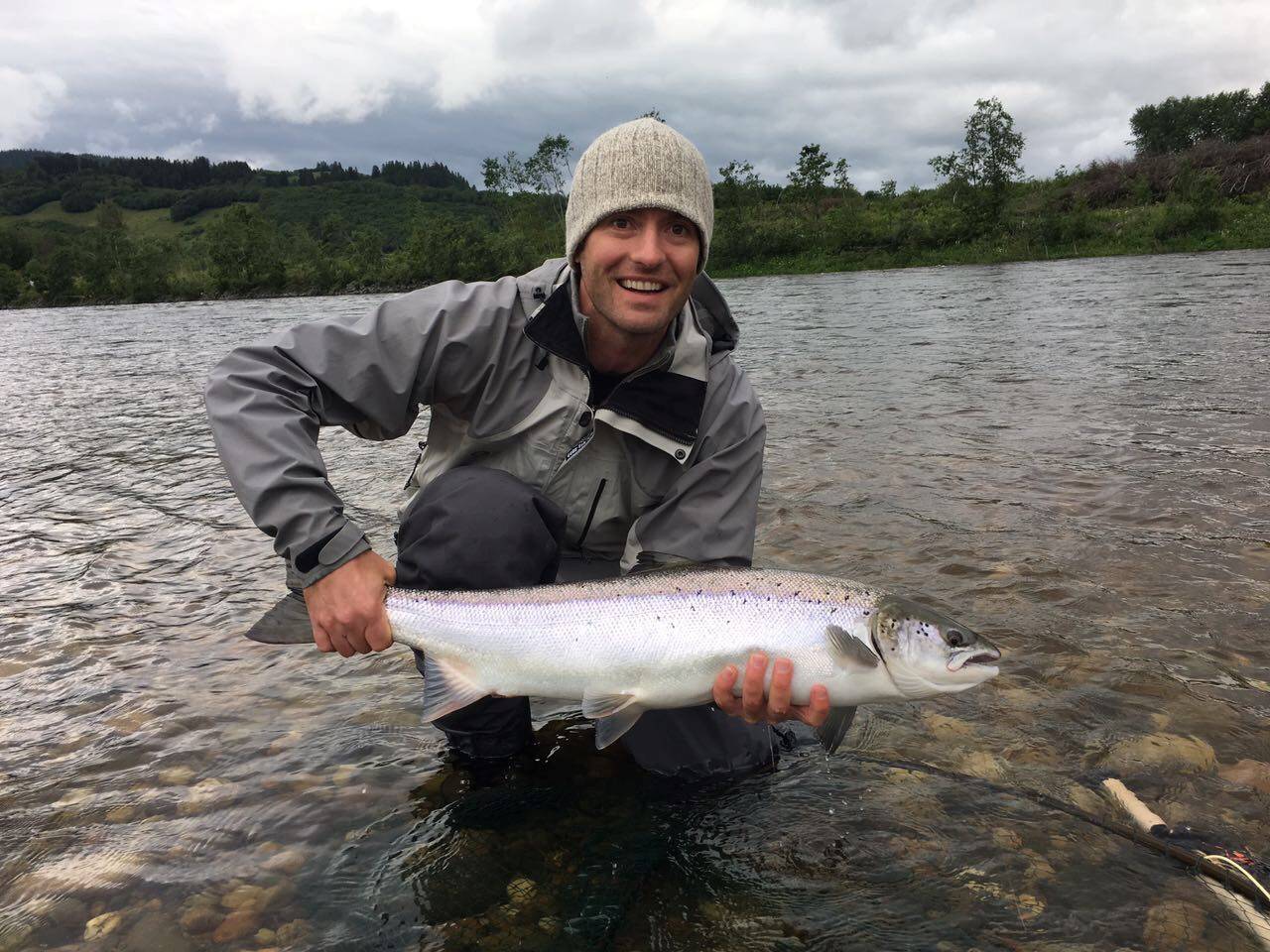 Alex Pearl with his E-beat salmon – exiting hours on the Gaula!

Fly-tier Sacha Pütz managed, just before the session ended, to catch and release a good fish on Beat A1 of about 8kg. 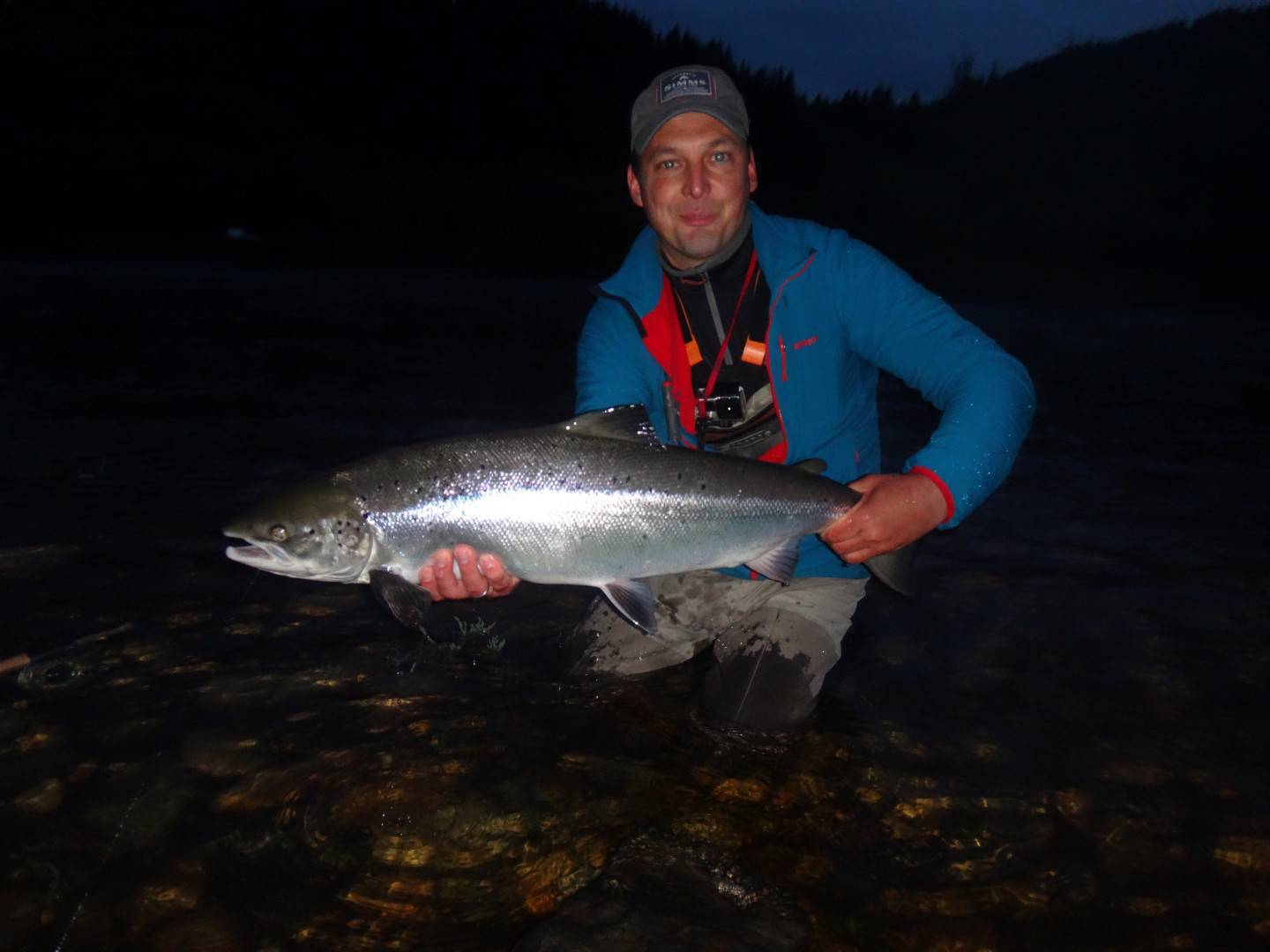 Sacha Pütz with his “last minute” A1 salmon!

It also seemed as though the Lodge Pool was on fire this week, as several more fish have been caught there by Francois Deloup another 7kg (15.5lb), two more grilse by Hans E. Wolff and Mawill Lüdenbach caught another 9kg (20lb) on the other bank, just opposite the Lodge building.

As well as New Pool (A1), which was still fishing well all week, producing fish again by NFC’s Daniel while fishing the beat during the late evening. Daniel landed a perfect fish of 97cm (approx. 9,5kg /21lb). The following morning Daniel managed to land another 4kg fish on Beat A2 as well. 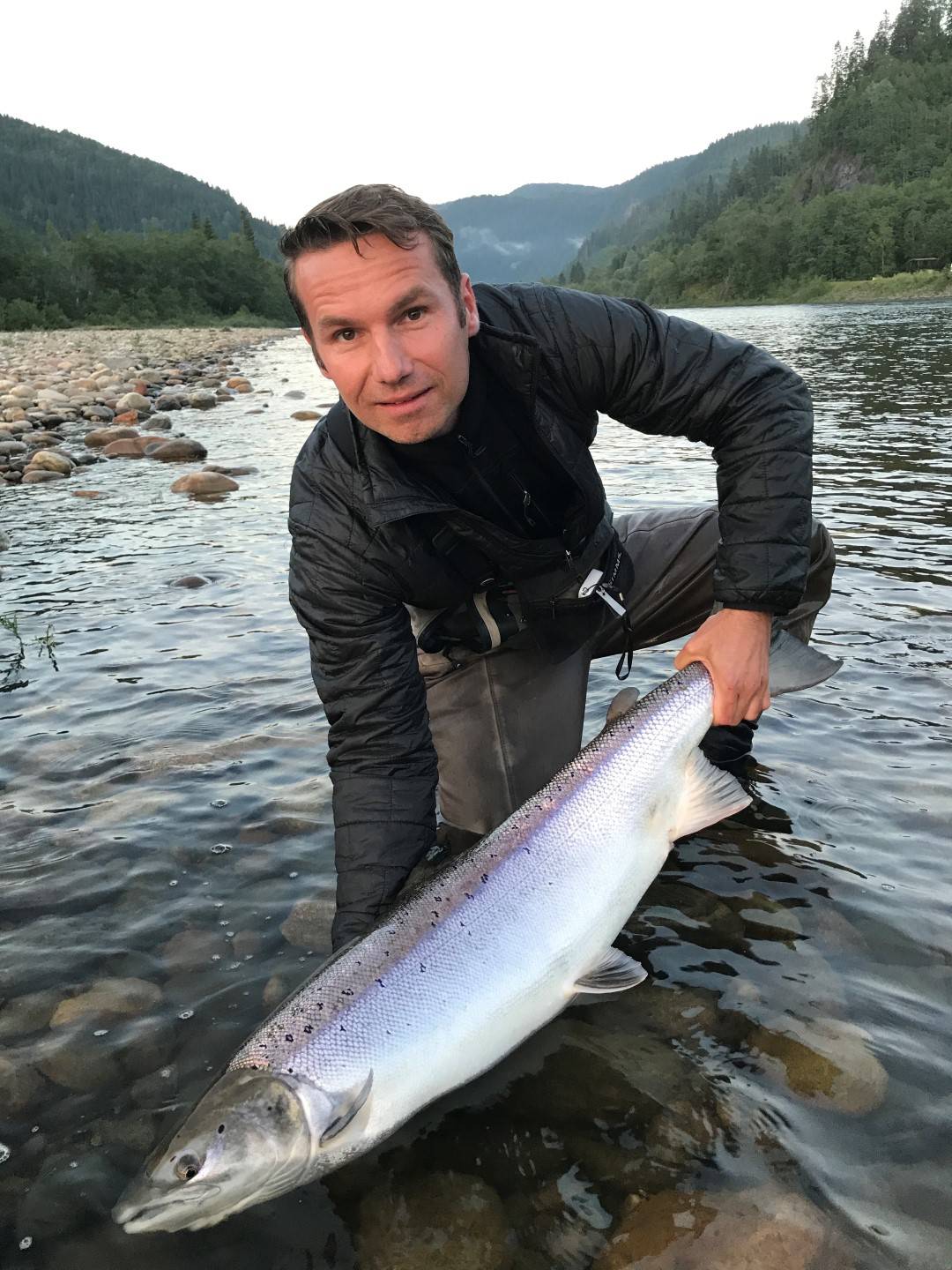 Daniel with his 97cm fish from Beat A1 – simply perfect.

A couple of more grilse were caught by Werner Brinker, Jean-Luc Pouillen, Yoshinobu Toide as well as a medium sized fish by Eric Soule between 5,5 and 6kg (about 13lb).

The week finished with a superb fish on our Beat A1. French regular Francois Deloup was able to catch and release another great female salmon on Beat A1 after a hard battle, where the fish ran Francois all the way from New Pool down to Home Pool! The salmon measured 110cm and estimated to weigh about 13kg. 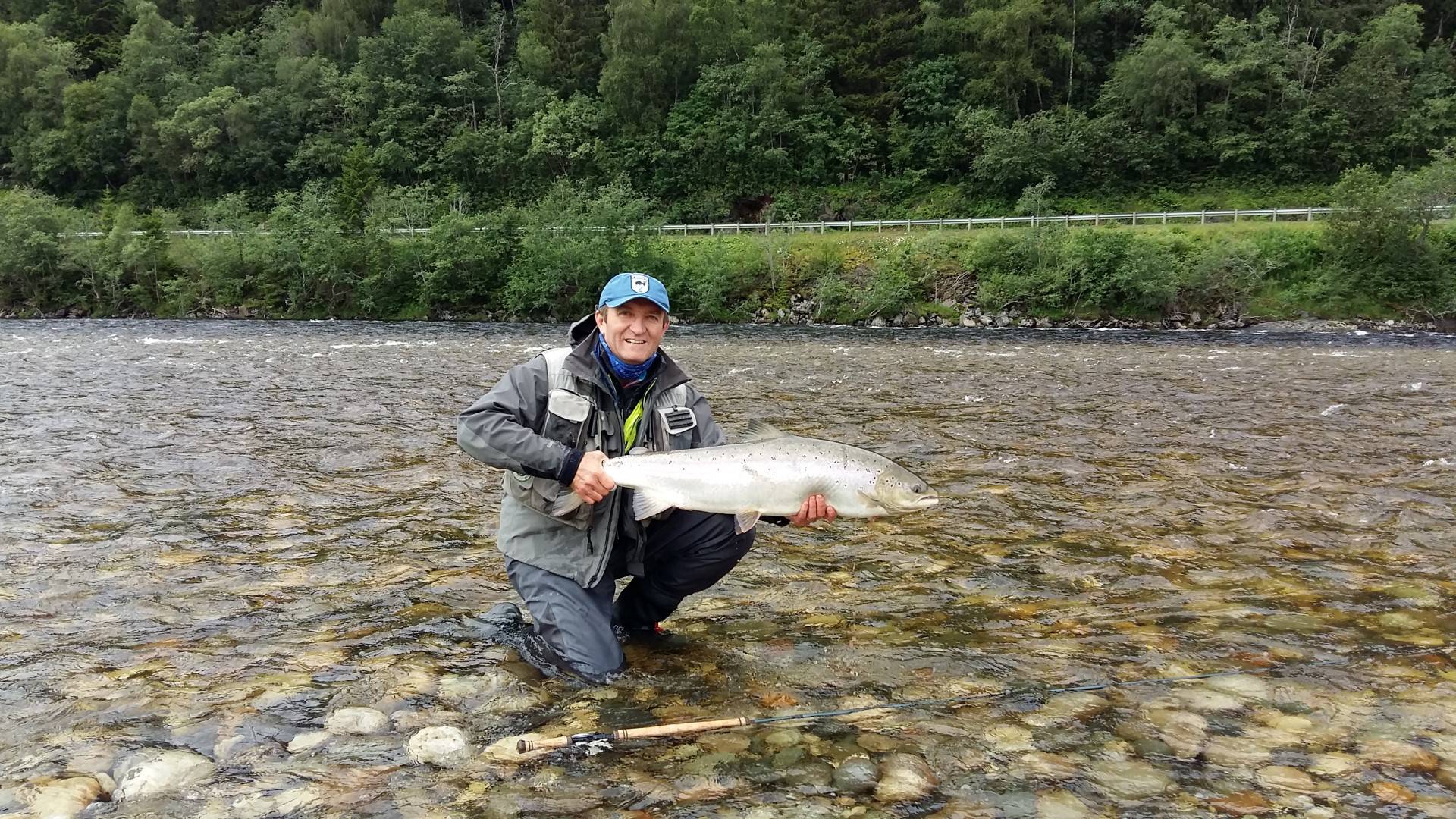 Francois Deloup with his beautiful salmon from Beat A1 – 110cm.

Despite the tough conditions with cold and high water it turned out to be a really good week. The river is now in perfect shape and it seems there are a lot of fish around and still fresh fish are running all the time. We are looking forward to the coming weeks, as we hope the fishing will continue to produce as many and good sized fish as the last few weeks. As we post this, week 29 has started very well with lots of more big fish! We will keep you posted.

That also means that the fishing in August will most likely be quite productive– so in case you have not booked anything yet or looking for some short notice fishing – just get in touch, we should be able to accommodate you!