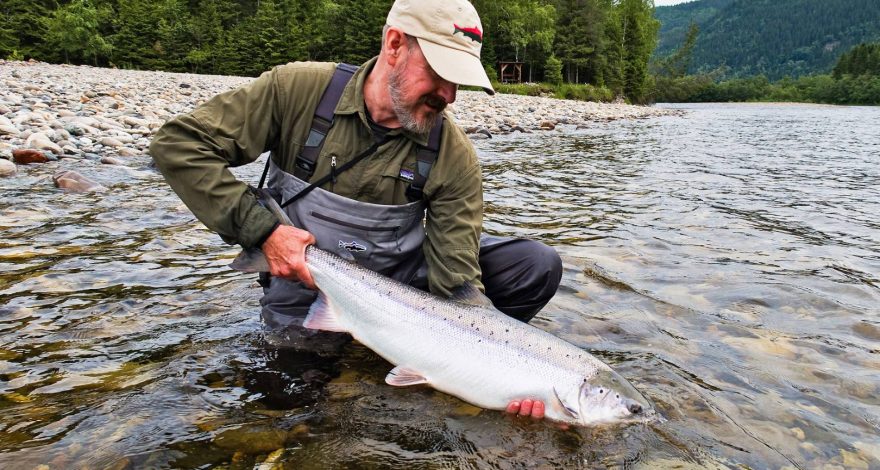 Week 29: Another exiting week on the NFC Beats with some big fish landed!

Week 29 was the first week thus far this season we experienced consistently dropping water levels, and the river finally reached what we would consider a “normal” summer level.

The week started off well with a fish a good session on G1 from our Austrian regulars Robert Heintschel and Franz Hochecker. They landed 3 good fish of approximately 10 kg (22lb), 8kg (17.5lb) and 5.5kg (12lb)! 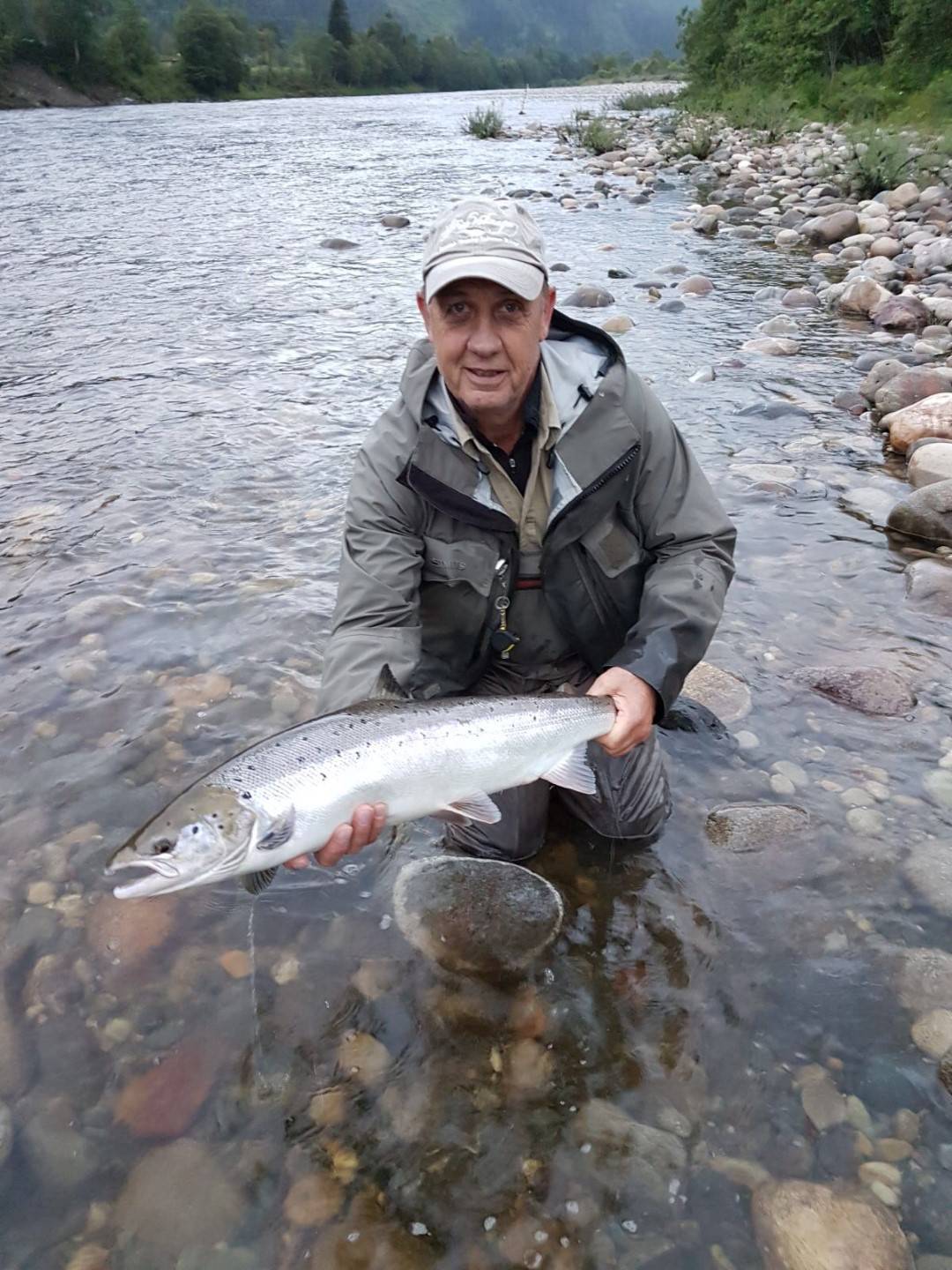 Robert with his smaller of the two he caught salmon from Beat G1.

Also our American guests John Hogaland and John Bleh started off with a bang as well.

John Hogland was able to land and release a 5.6kg (12.3lb) salmon on Monday morning and John Bleh caught his biggest Atlantic salmon thus far at Langøy (B1) – a superb fish of 110cm and probably weighing about 13,8kg (30.3lb)! 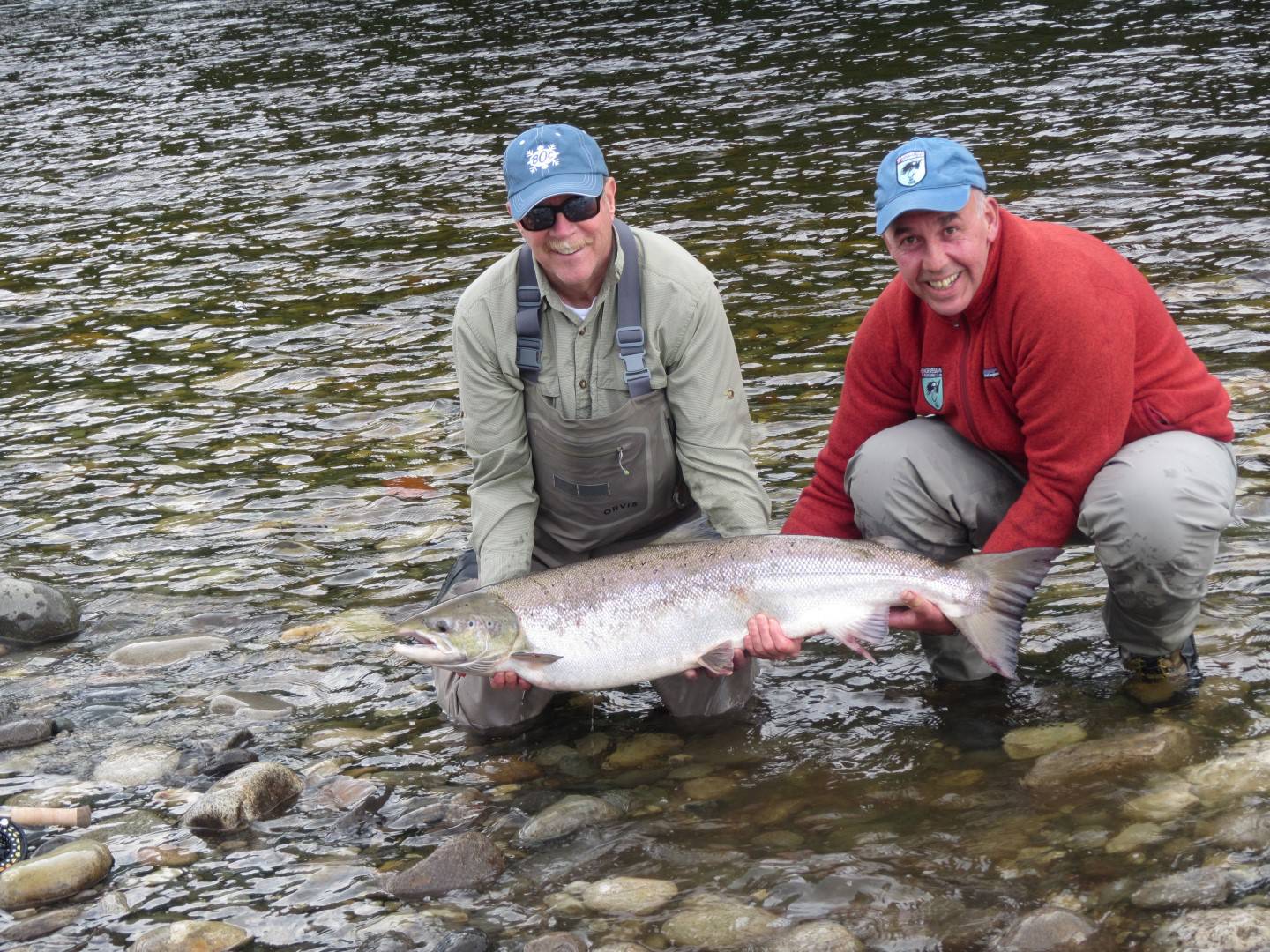 which has been quickly released after this fast picture.

That afternoon was a great day for a few other guests, as Jeff Bright was also able to catch and released his first salmon of the trip, a good fish of 6kg at Beat A1. 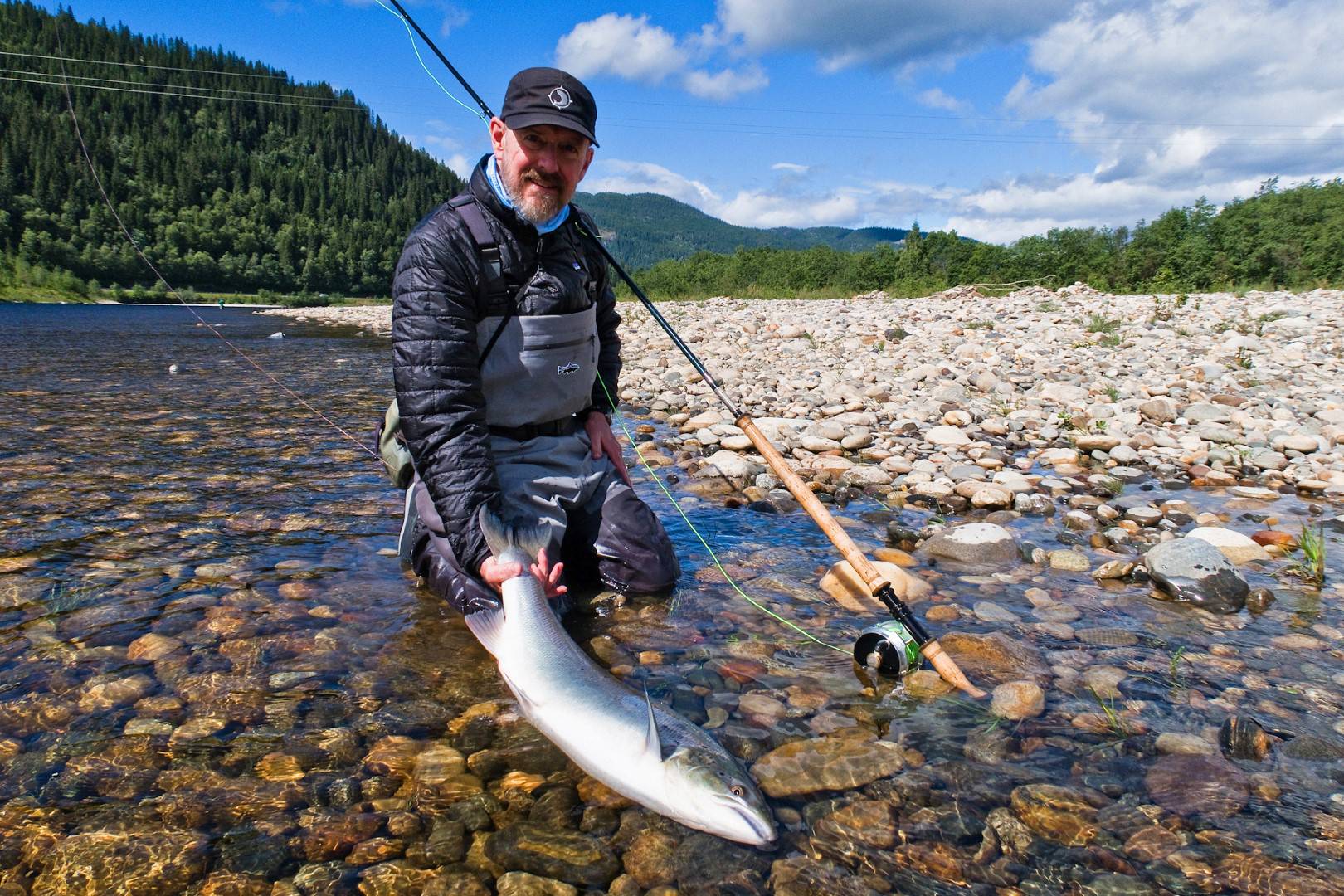 Jeff Bright with his first salmon if the week.

Regular NFC guest, Jean-Luc Verstraeten came back for his 3rd week with us and caught his biggest salmon of 2017 at Beat BS2 – a really beautiful female salmon measuring 109cm and certainly weighing about 13kg (28.5lb)! 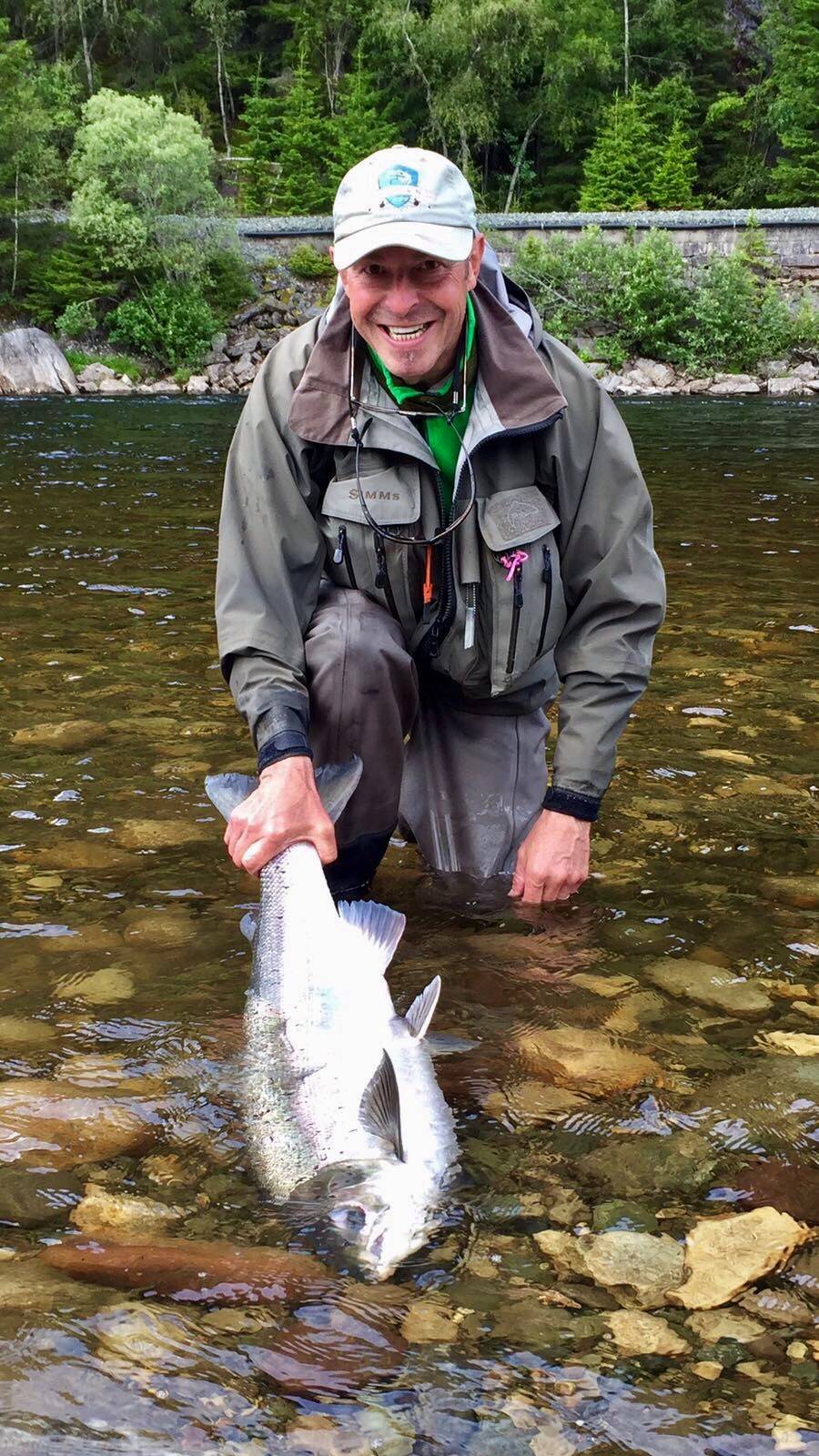 Jean-Luc with his stunning bar of silver from BS2.

German Fly tier Sacha Pütz was able to land a salmon of 4,2kg (9.3lbs) at our Lodge Pool after losing a couple of fish there before. 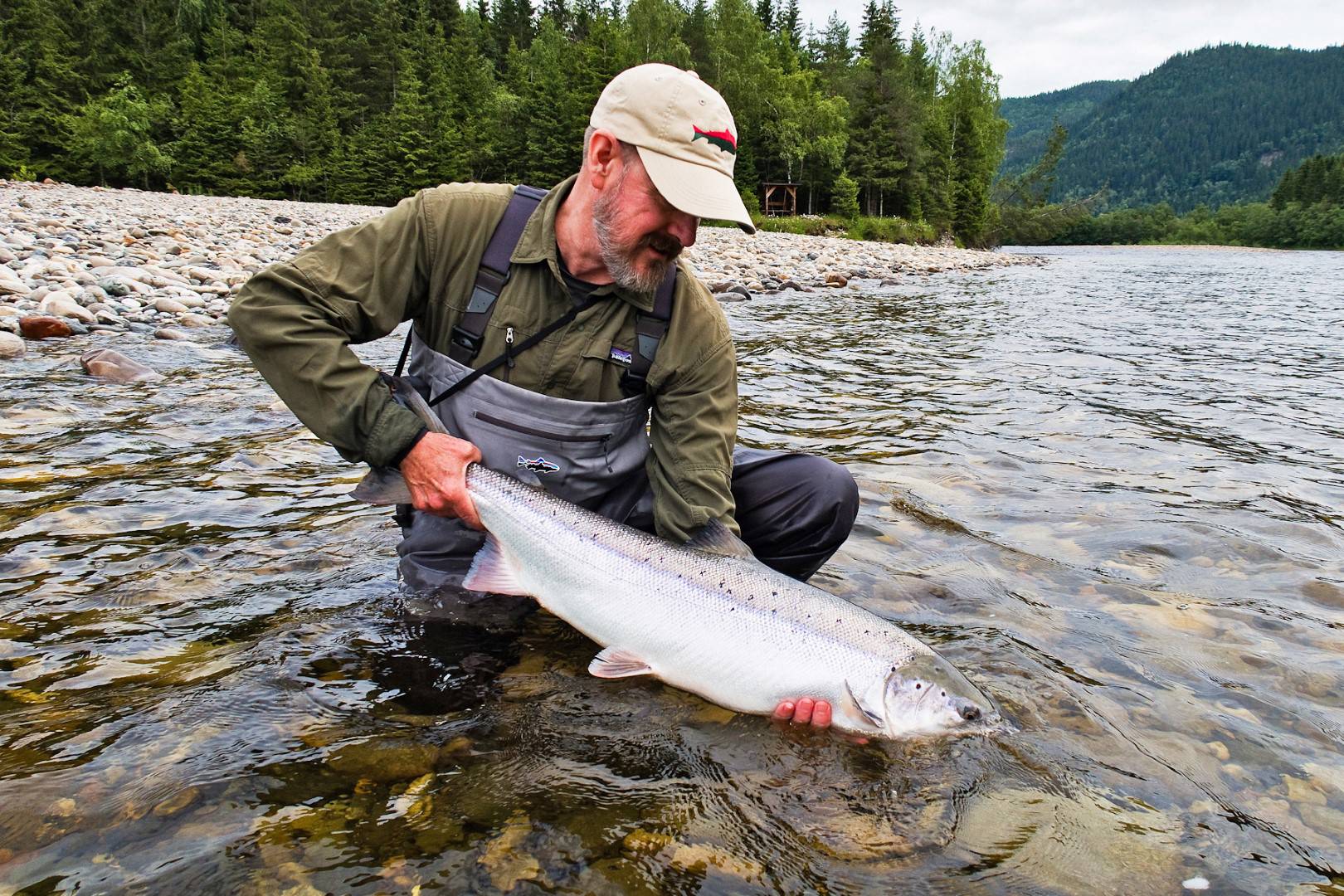 Jeff Bright holds a perfect Gaula salmon on Beat B1.

As well as Manfred Raguse who was able to catch and release a great fish of 105cm and weighing about 12kg (26.5lb) on our Beat B1. 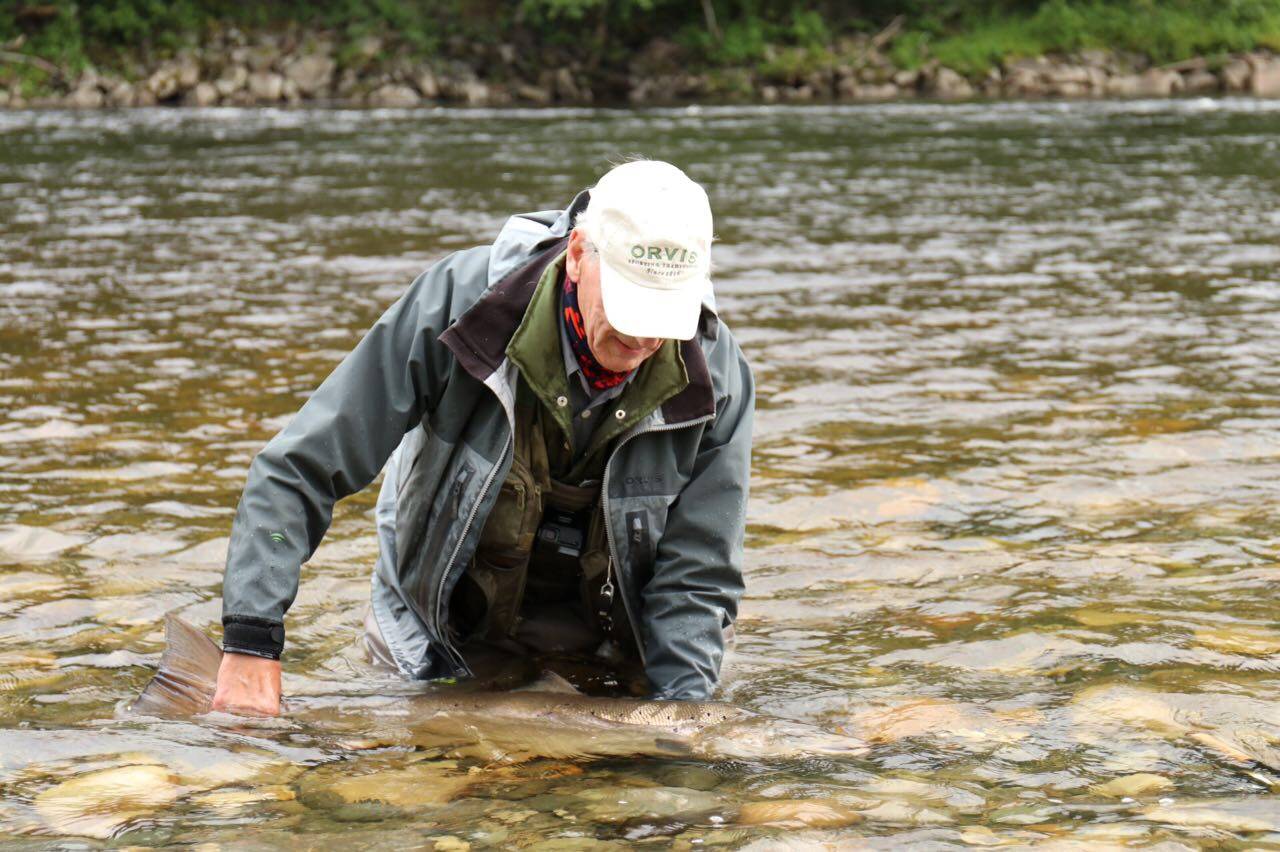 Manfred releasing his big fish from beat B1.

Our first-time visiting Canadian guest Terry Antoniuk caught a great fish on Beat G1, after he caught a grilse during the first evening. His 2nd salmon of the week was a great one – measuring 98 cm and weighing well over 9kg (20lb). 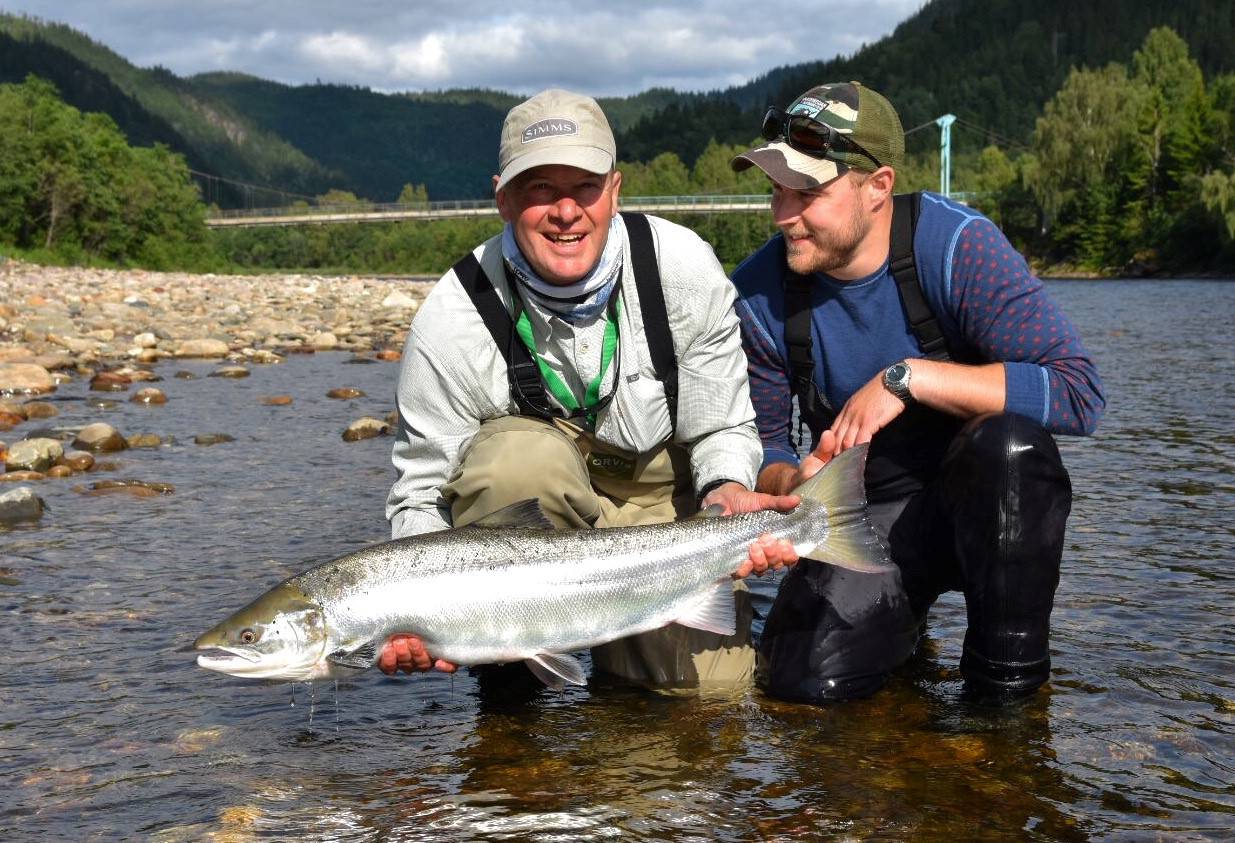 Terry with his great fish and guide Daniel Persson.

As the week continued, the weather began to get warmer and warmer, and with plenty of sun, the conditions definitely had a negative impact on the fish as they stopped taking flies as well as they did the first days of the week, and the weeks before. But still our fishermen landed fish – like Jaques Caluwe from Belgium who was able to catch and release the next big fish of 104 cm, weighing about 12kg on our Beat B2. 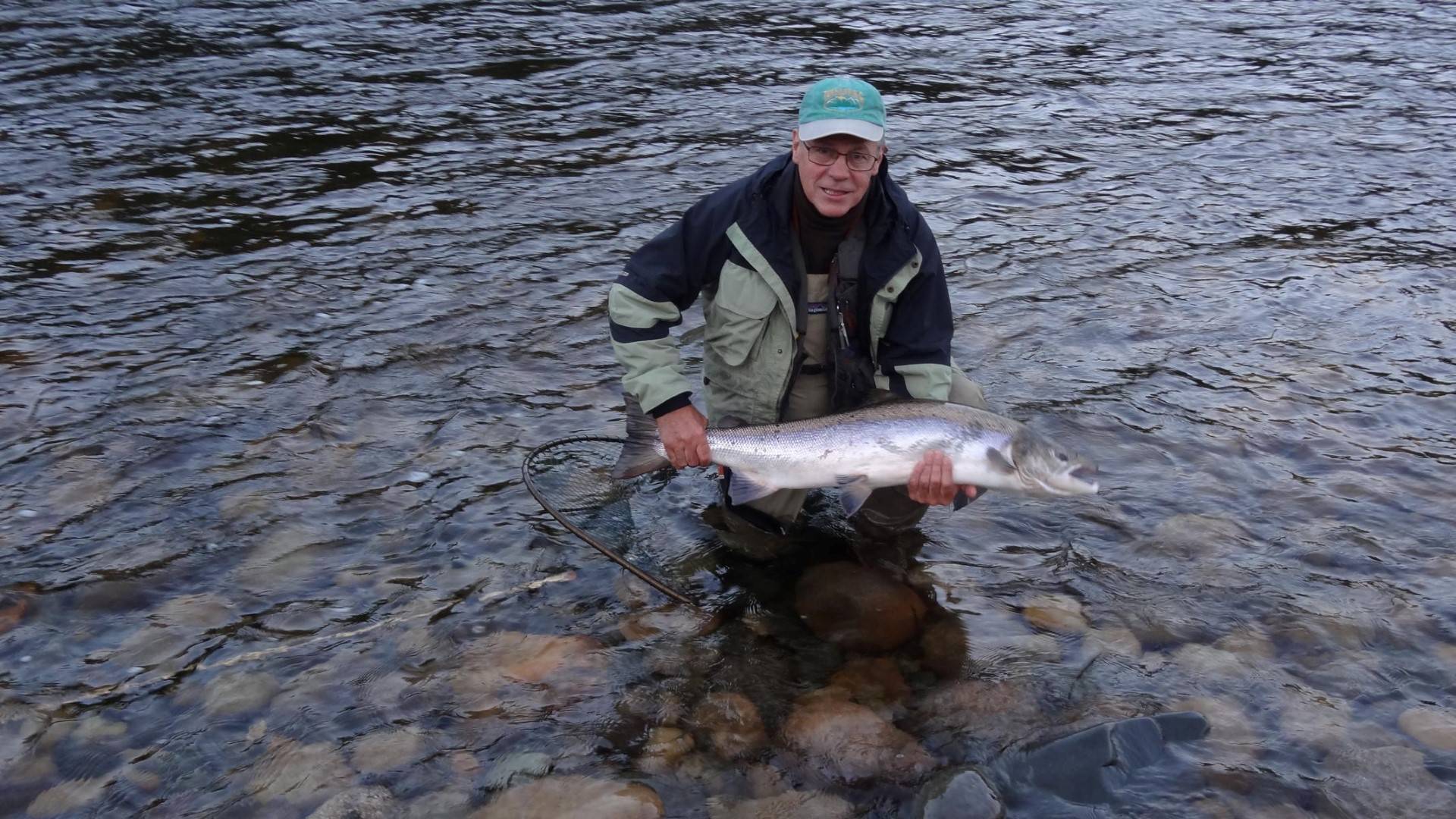 Jaques with his early morning salmon 104cm from Beat B2. 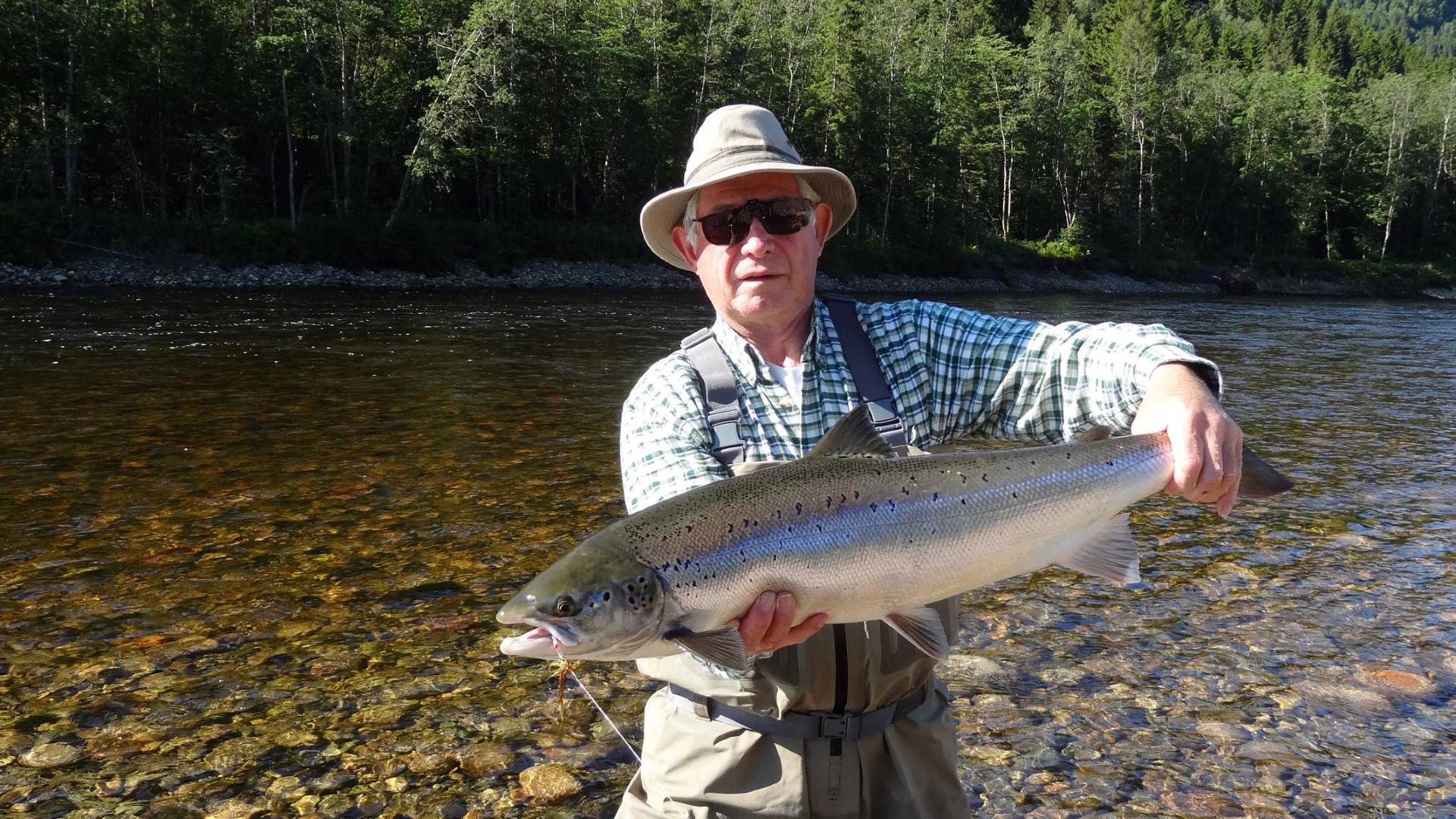 A nice fresh fish for Gust! 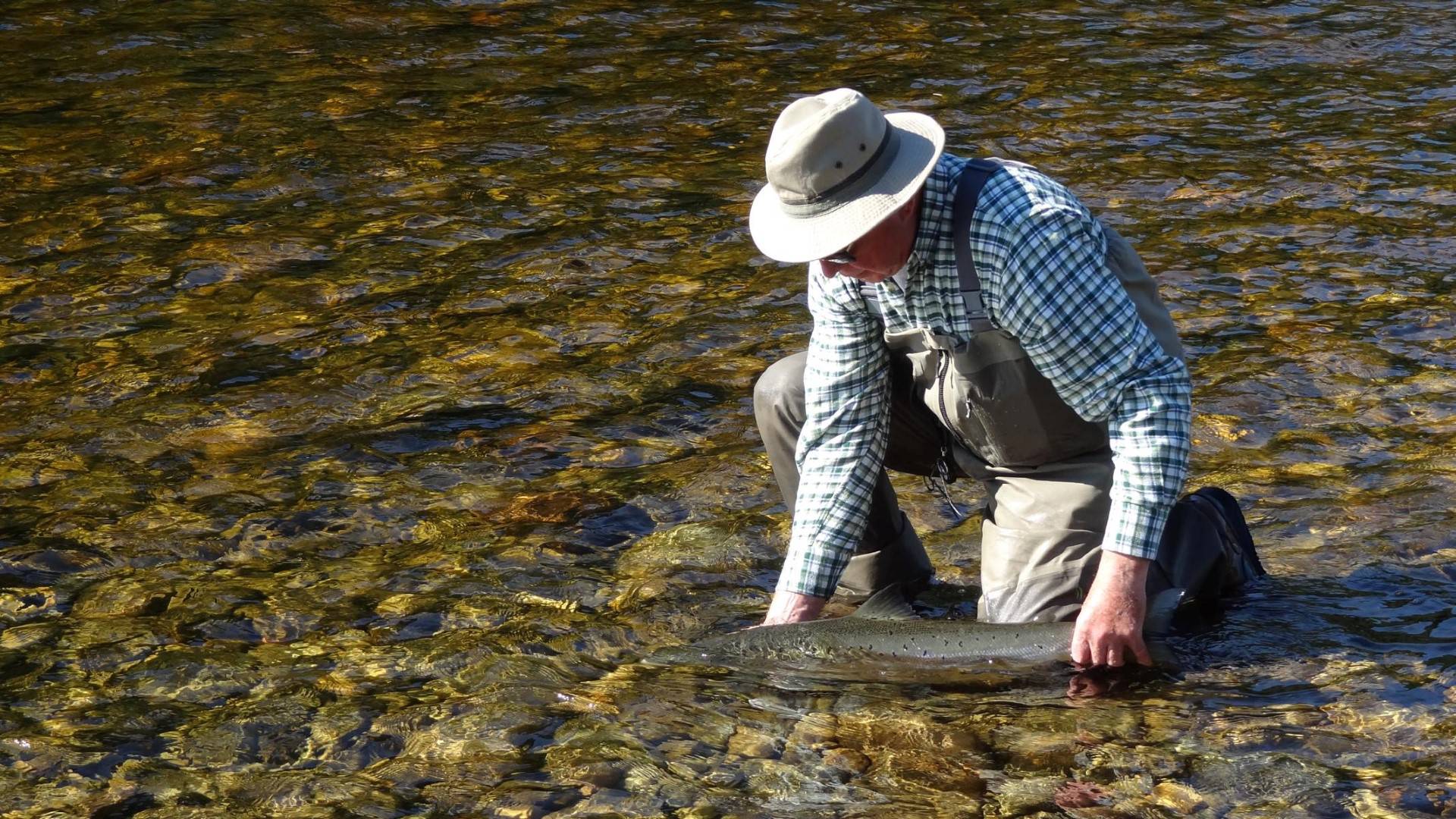 After a quick lift the release of his nice salmon.

Also Jean-Luc Verstraeten was successful again and caught a salmon about the same size, measuring 85cm. 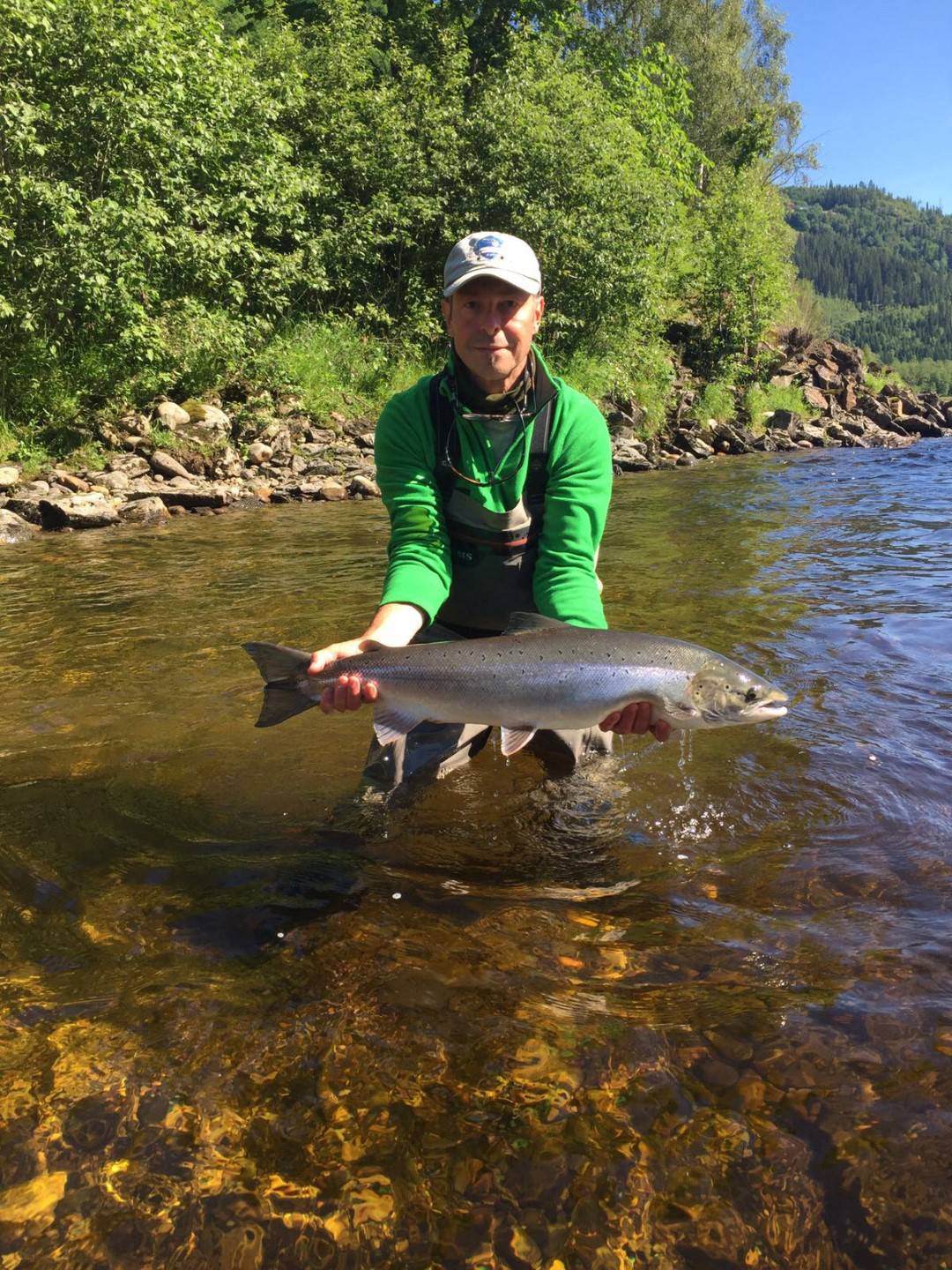 Jean-Luc with his bright sunshine salmon from Beat G1. 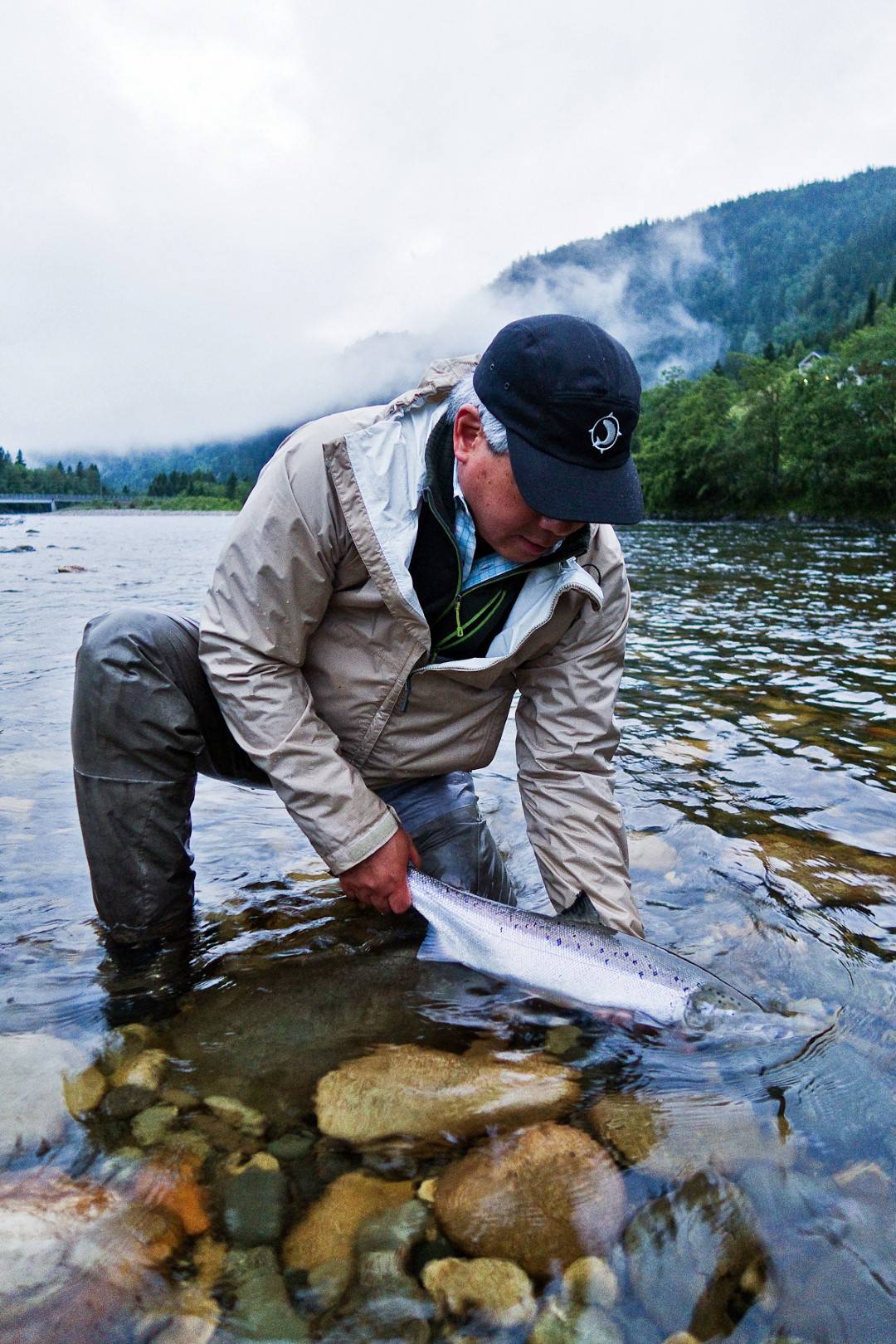 Dennis Ling with a fresh grilse.

As well as a couple of nice seatrout were landed and released, such as the picture below showing a nice one from Beat A1 caught and released by Gene Weber. 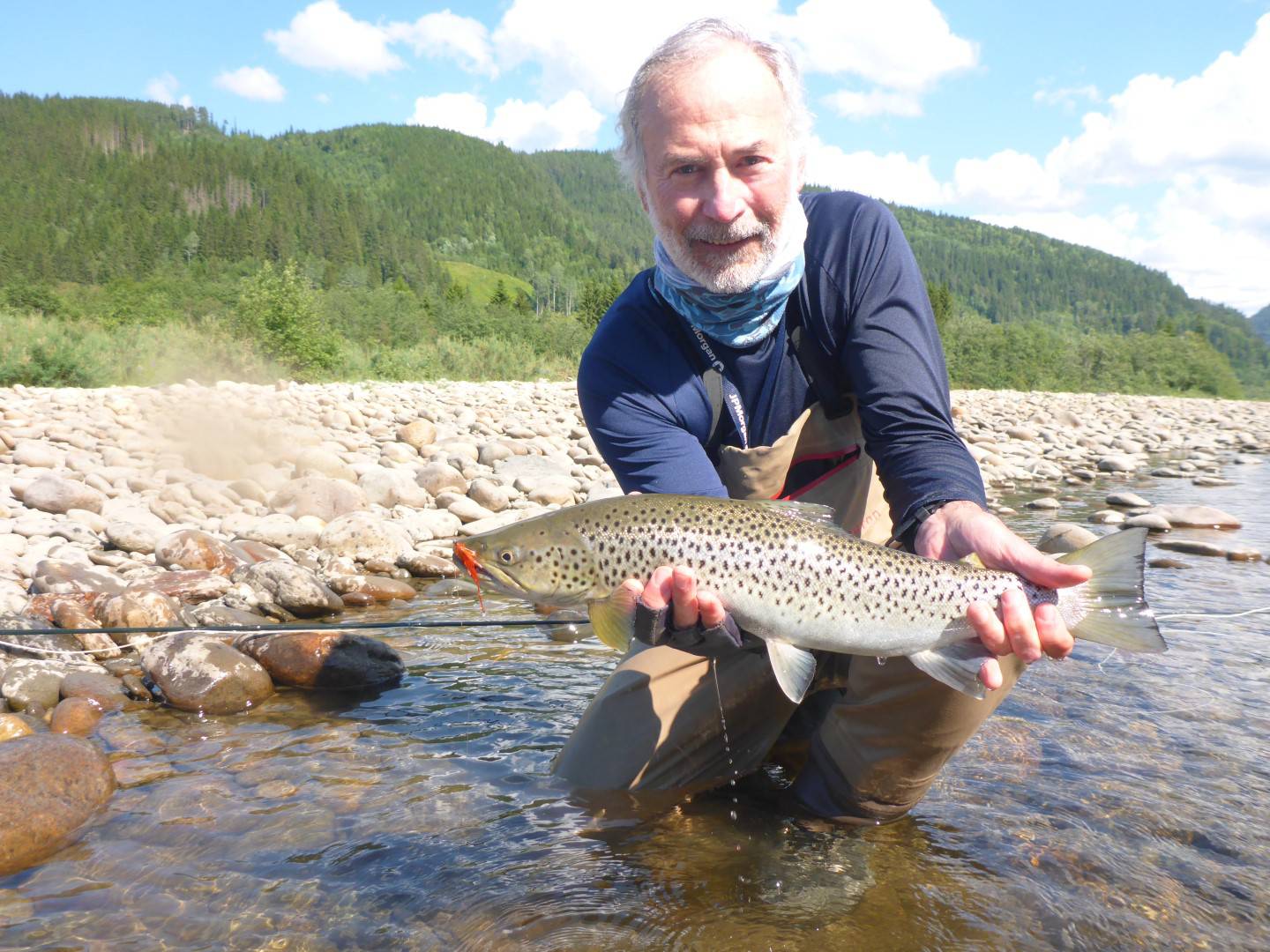 Gene with his seatrout from Beat A1.

Toward the end of the week the water was already quite low and the fishing had slowed down a bit, but that is a part of fishing a natural, unregulated river, and we still see plenty of fish in our pools and fresh ones coming into the E-Beats. We think that as soon we get some water the fishing will be great again.

Your team of the of the