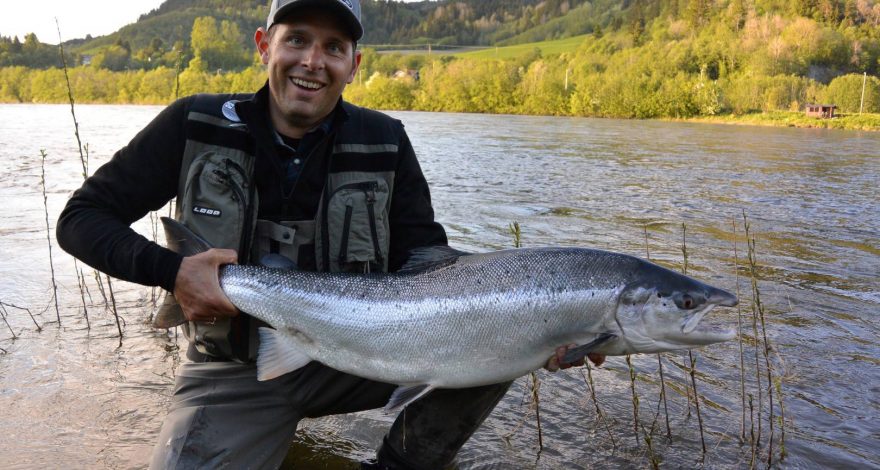 Week 22: The 2017 Gaula season starts off with many huge fish

And the NFC, while late to the game, finally had a great kick off today!

The start of the 2017 salmon season on the lower Gaula has been excellent for the first few days of the season. Kicking off with some really big fish landed, for example, a monster salmon of 23,1kg (50.9lbs) caught just below our E3 Beat, which is a new record salmon for the Gaula for the last 30+ years! As well as another 21kg (46lbs) fish and many fish over 15 kg (30+lbs) have been landed thus far. The river, which until May 31st, was very high due to snowmelt, and nearly unfishable, dropped into perfect early season condition, and the catch results are proof.

Unfortunately, up until now, our fishermen simply have not been very lucky during the opening days. While fish were hooked, we lost a good number of fish but never managed to land any until today….when the tables turned! 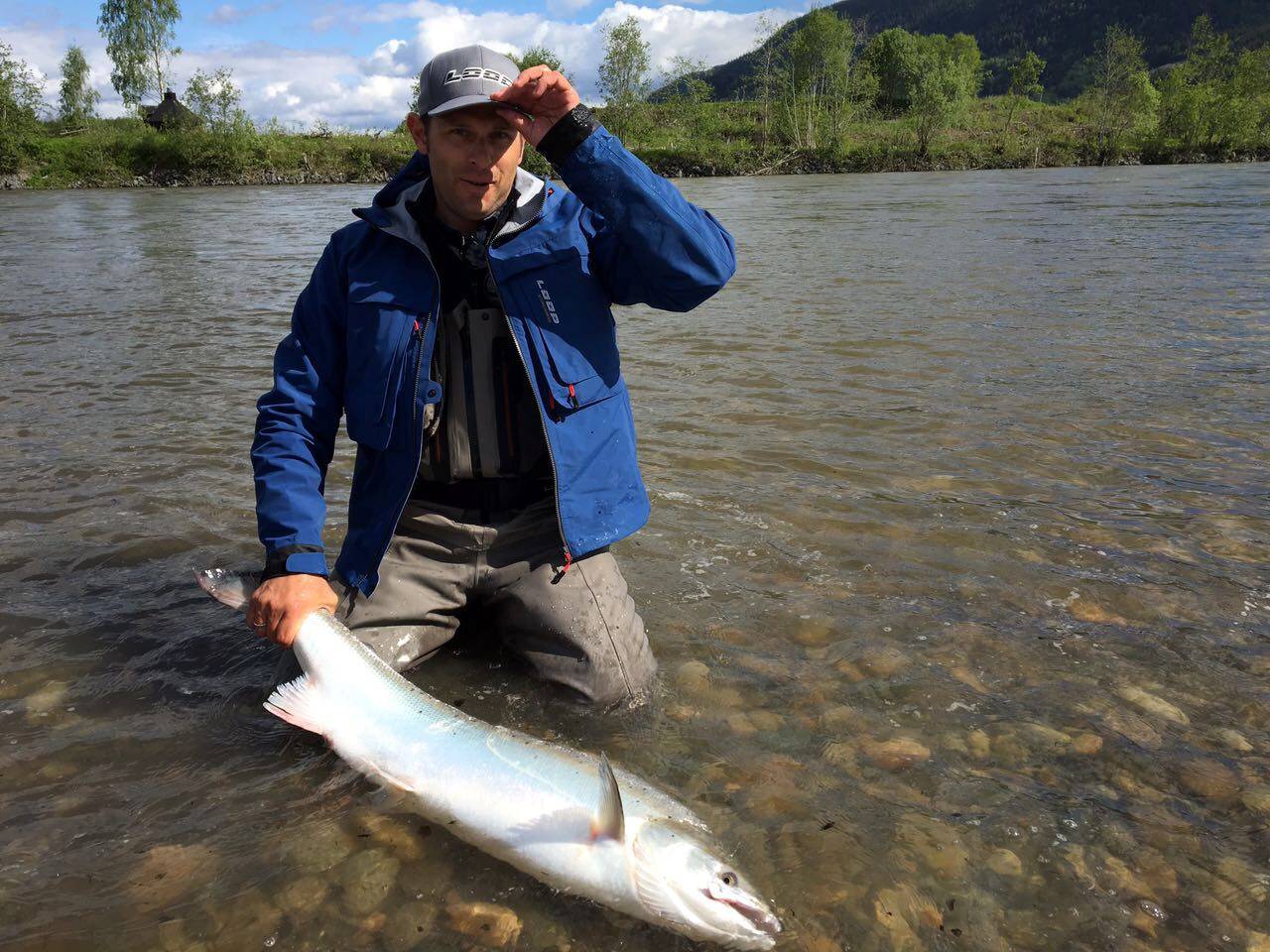 Many people have asked us why we did not catch fish during the first couple of days – and the simple answer:  we don’t know either…

…but finally started off with Manuel’s superb salmon this morning!

After dinner Manuel headed out to Beat E1 and again it took only a few casts until he hooked his next fish. This time he was able to land a 106cm Male salmon, weighing 12,6 kg, a large male fish which was hooked quite deeply and was not able to be released. 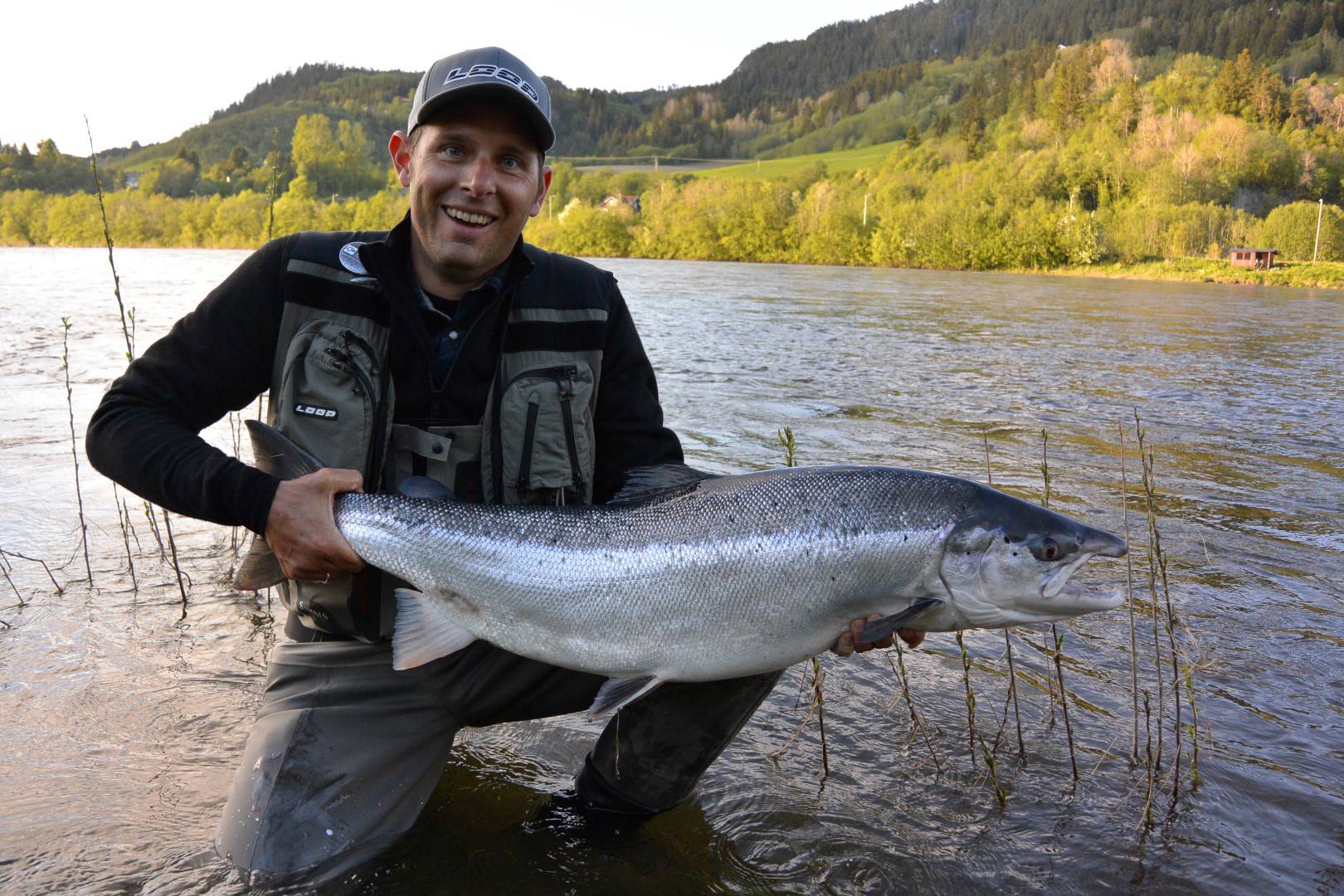 What a day – two big salmon – congrats Manuel!
Also Thies Reimers had the chance to fish the evening at E6 and was able to catch and release his first salmon of the season, another super fresh fish which he estimated to weigh about 8kg which he caught in the channel of E6 – a great place in high water. 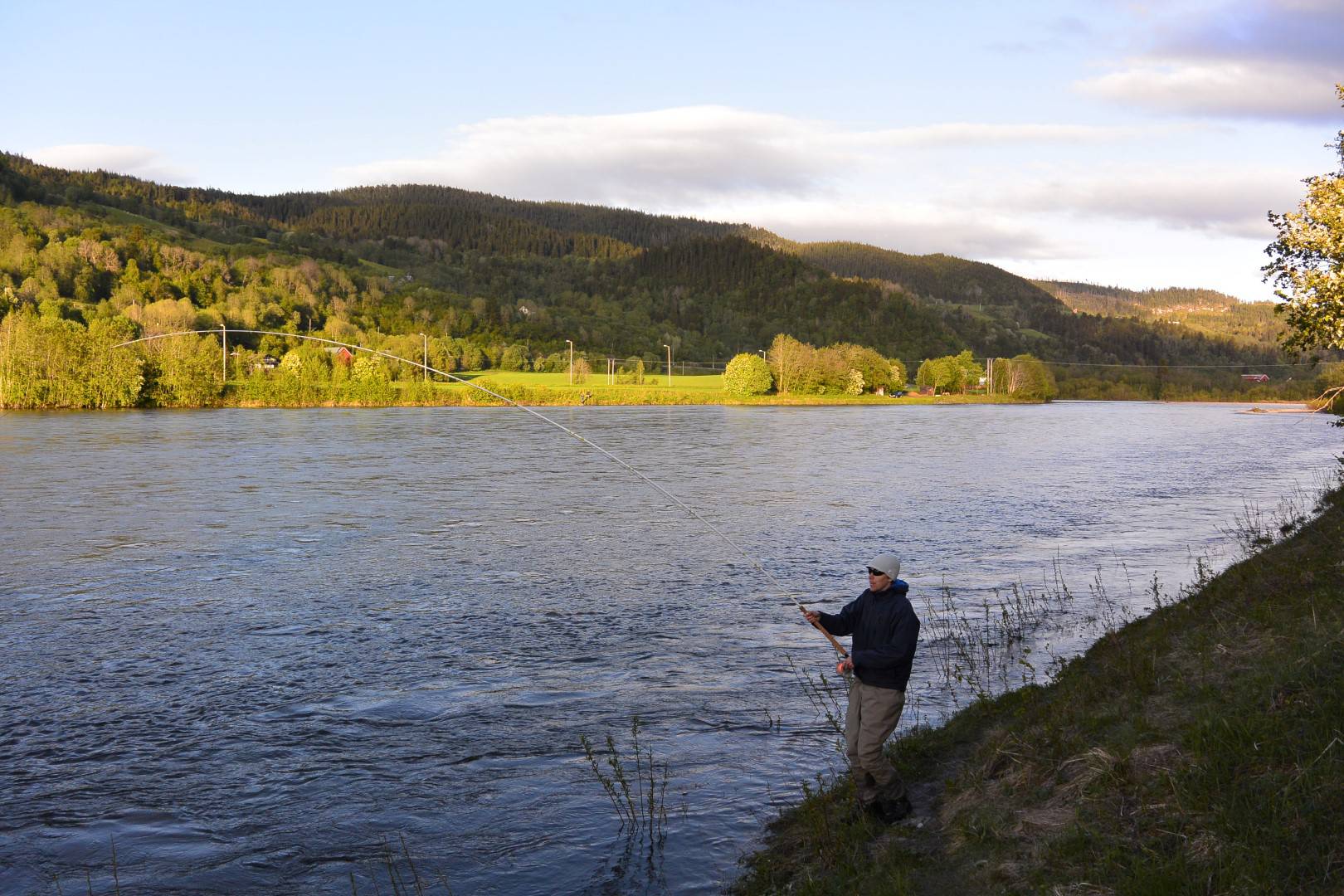 Thies is into his fish on Beat E6. 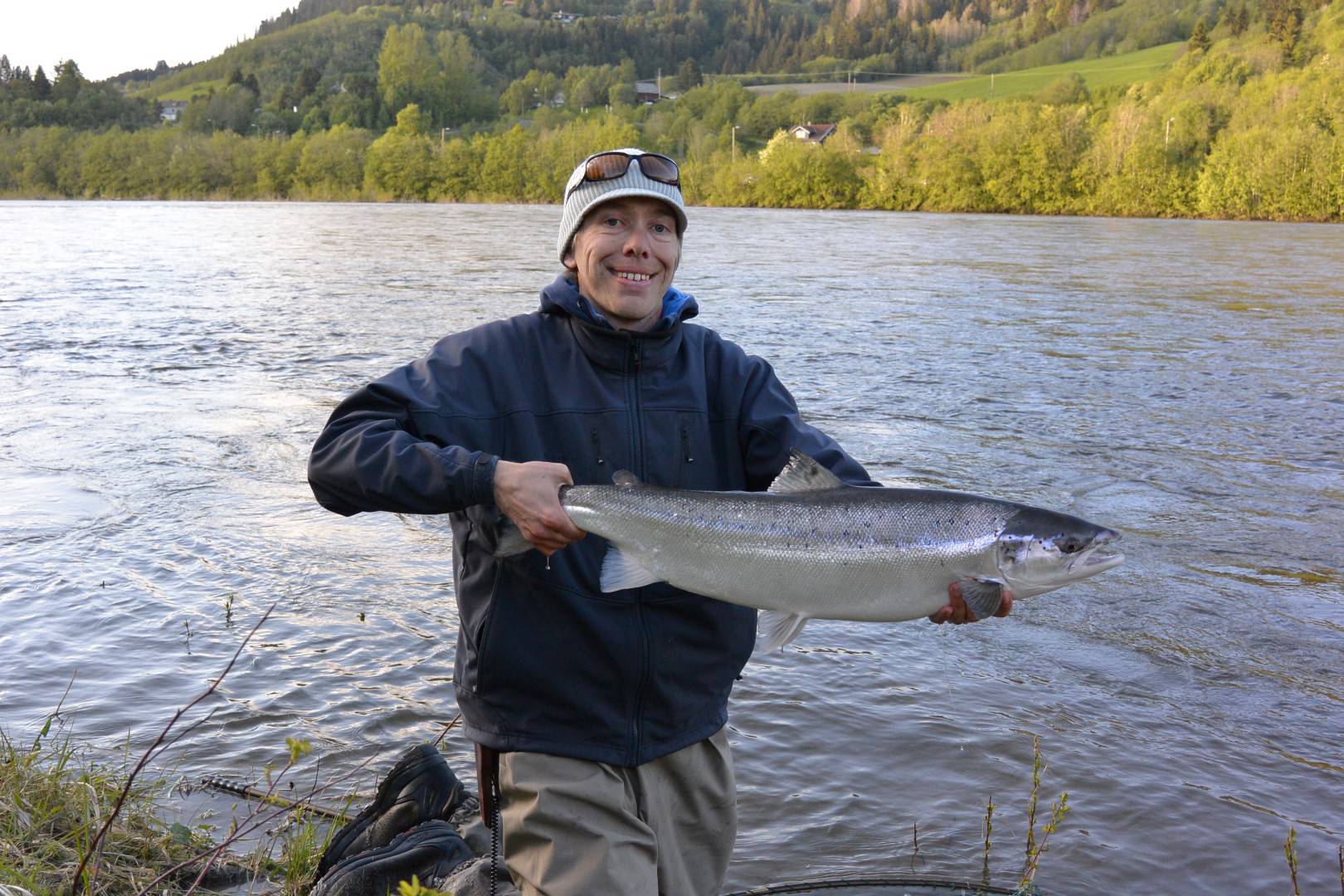 Thies and his 8kg June salmon from Beat E6 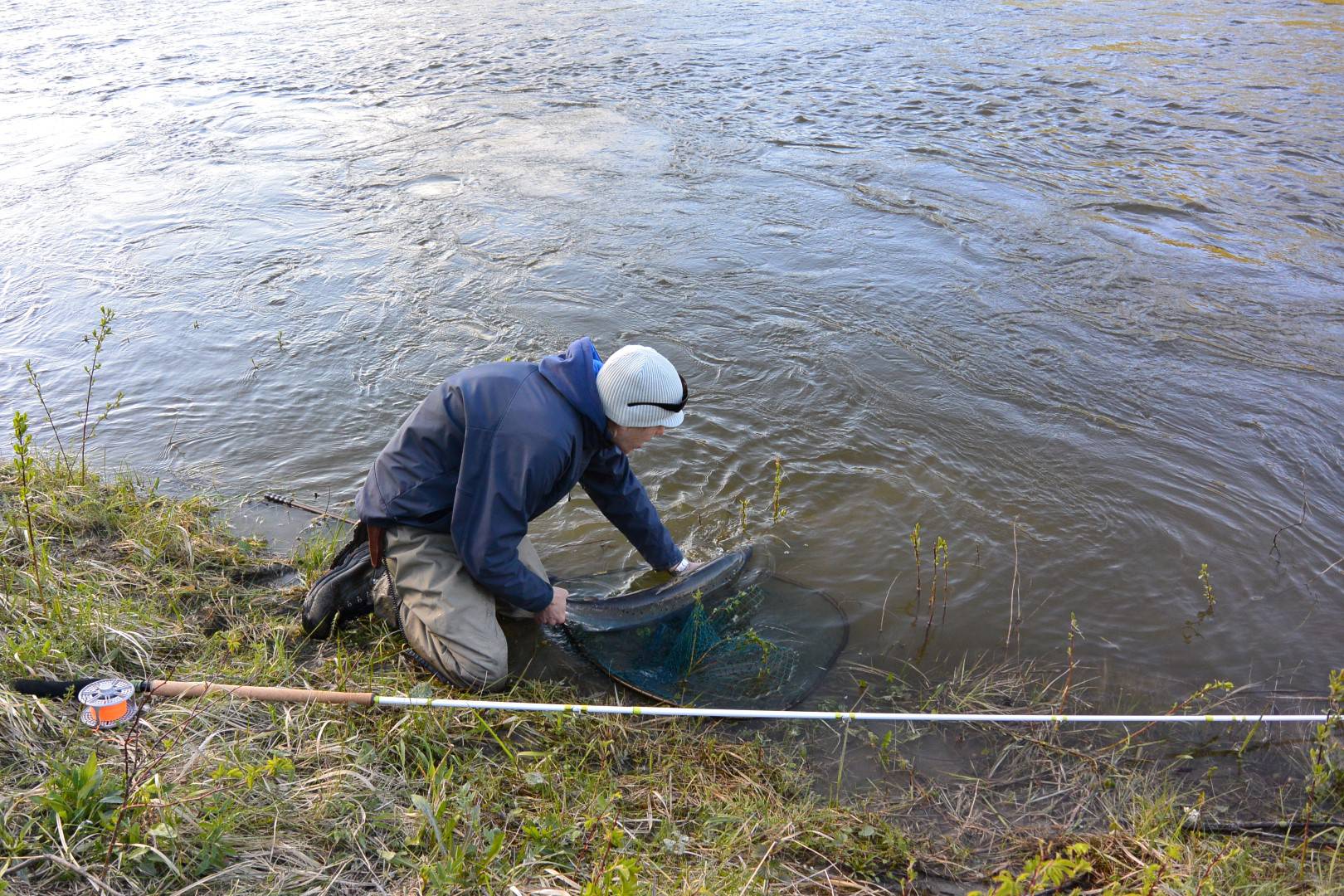 Releasing the first one – simply the best feeling there is!

Finally the tide turned for us at NFC and we are pleased to be able to report the beginning of what has been a great season start on the Gaula – we are very glad that the ice finally broke and we are hoping that those fish are the start of a fantastic season 2017!

There is still a lot of snow left in the mountains so we do not expect low water any time soon. Rather it seems as though we will have high water conditions for the better part of the next two weeks. Which we feel is good in the long run, as it may help to maintain a superior water level into late July and August.

The average weight on the Gaula so far has been 9,4kg – which is very high. Meaning any fish hooked these days could potentially be the fish of a lifetime right now. There seem to be many very big fish are in the river and we are very positive that we should get more catch reports in shortly.

The Gaula rose up to 470m3 at the Gaulfossen gauge (due to strong rain falls last right which washed down quite a bit of snow), but it was already dropping again from midday – so if there are fish to catch in very high conditions there should be even better chances tomorrow.

We do have open rods during the later season if you haven’t booked yet. And we believe all is set for a great season, so the Gaula might be a good choice, just drop us an Email or give us a call if you are interested.