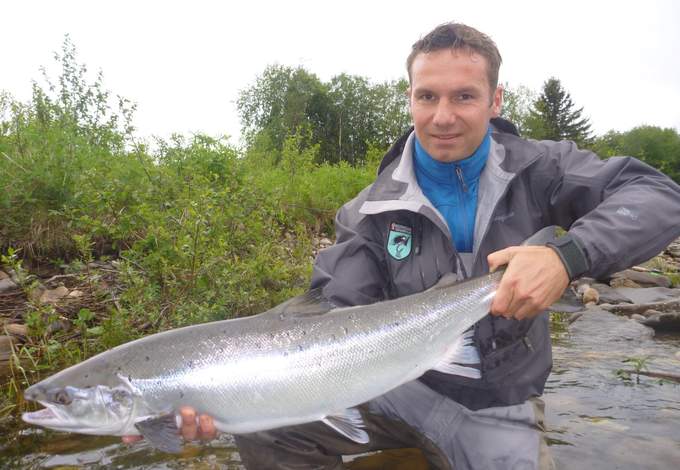 Week 24: A challenging start makes way for a strong end!

The week started off with high water levels again. The water rose up to 460 m³, which made the first days very tough. On Tuesday Peter Ericson caught the first fish of the week on Beat E2. Peter fished the Beat during a break from guiding. Peter decided to try it with a Banana tube fly – which proved to be a good decision. 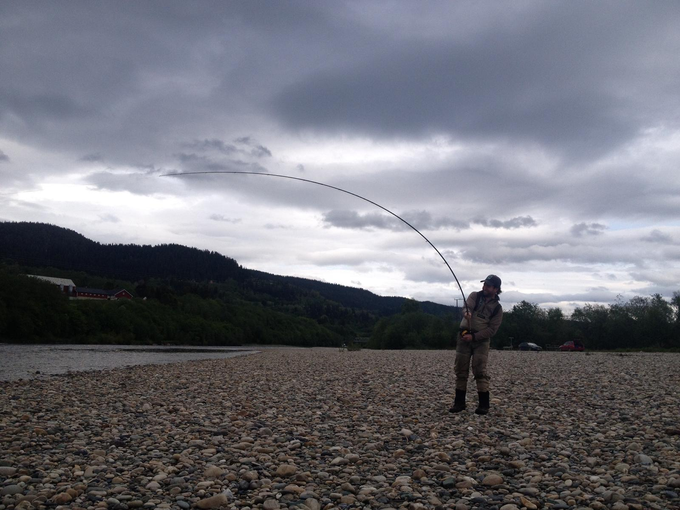 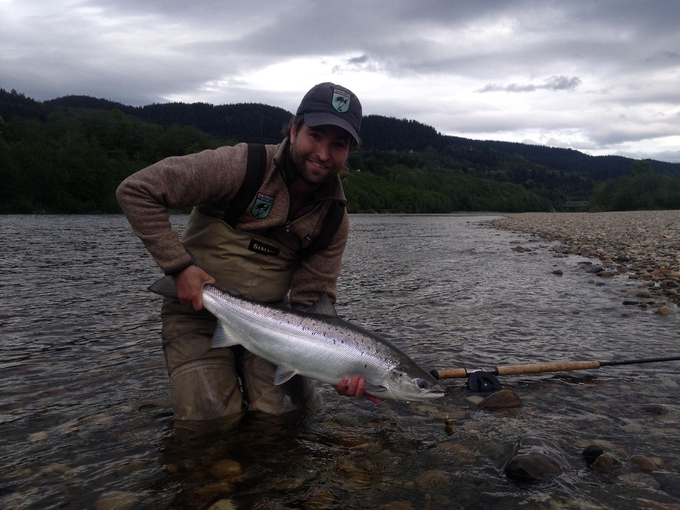 Peter holds his nice fish of about 7,5kg weight. 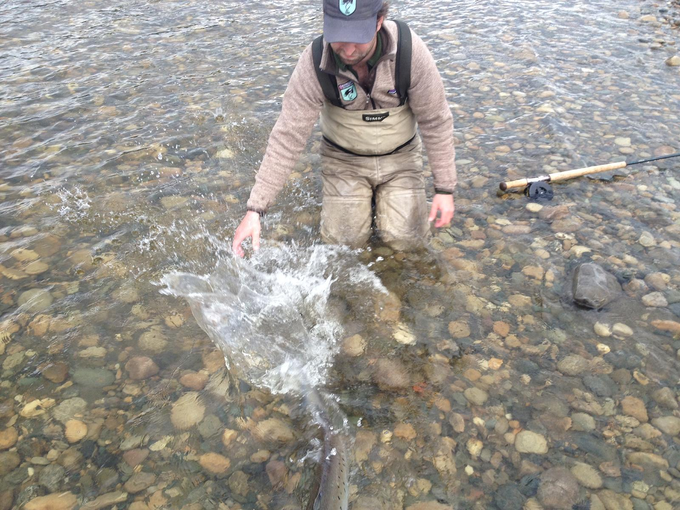 Obviously released in good condition. Nice to see them go!

Sadly it kept on raining and the water level dropped very slowly but regardless, our regular Roland Puff managed to catch a nice fish on Beat E2. This fish was bleeding, so there was no point in trying to release the fish, but anyhow, a great fish! 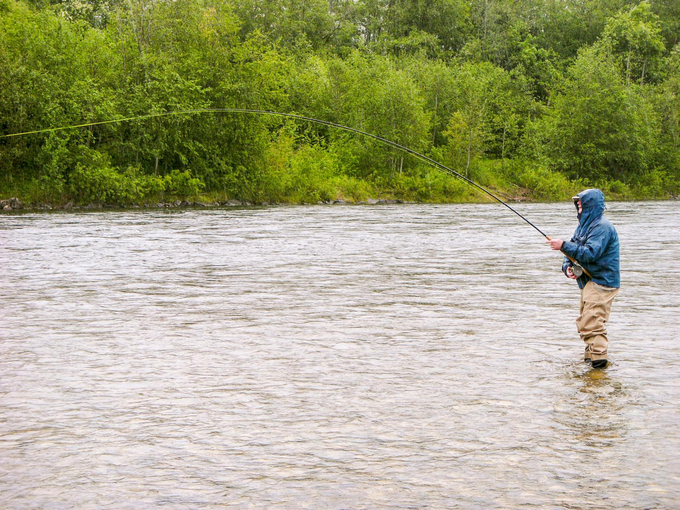 Roland into his first salmon of the week – they are strong! 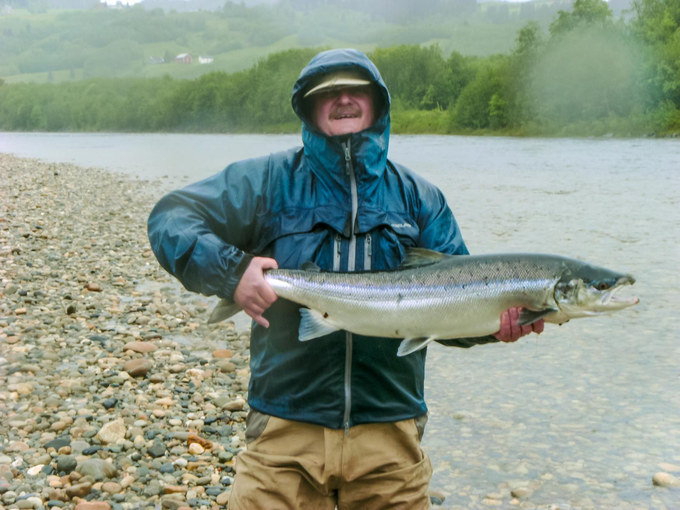 Finally the water started dropping quicker and the river reached a water level around 250m³ and lower, which is a perfect level for our Beat L1. NFC’s Daniel fished the beat during a free evening and was able to land his first salmon of the season 2015. 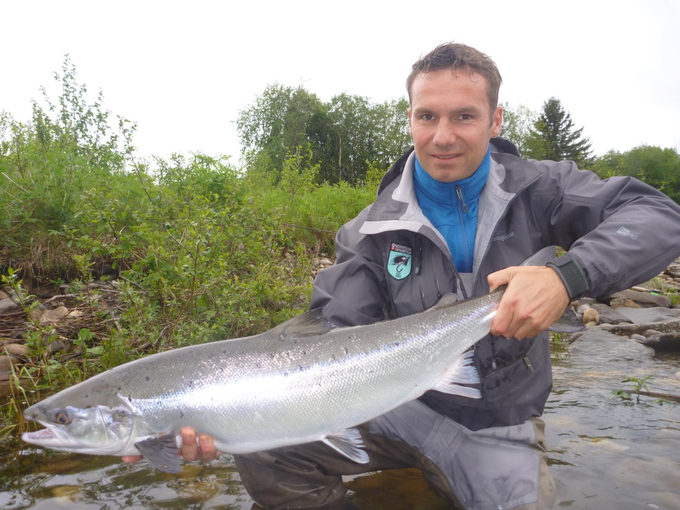 Daniel with a fresh and sea-liced salmon about 7kg. 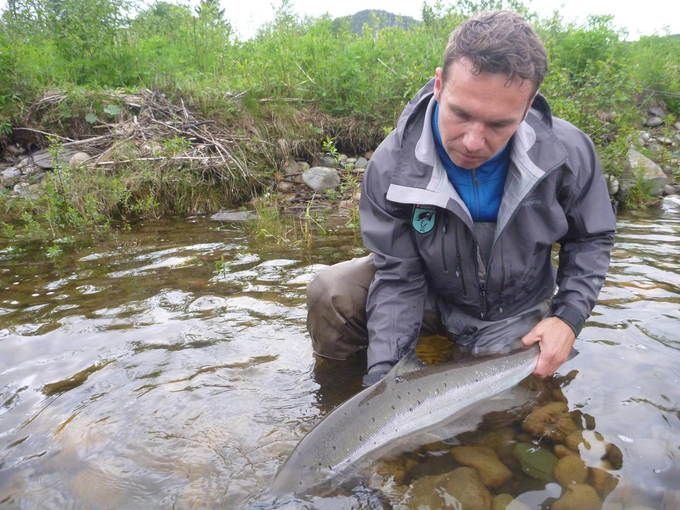 Daniel about to release Nr. 1!

The next day was gearing up to be a great one, water kept on dropping and our fishermen hooked quite a few fish and some nice fish were landed as well!

The first fish of the day was hooked by Scott Jacobs, an American guest who just came by for a day of fishing. He fished Beat E1 and hooked a good fish under the powerlines, which sadly came off after a good fight.

Manfred Raguse fished at the same time Beat L1, and basically and the same spot as Daniel the day before he hooked his salmon. A short time later he landed a good fish as you can see below. 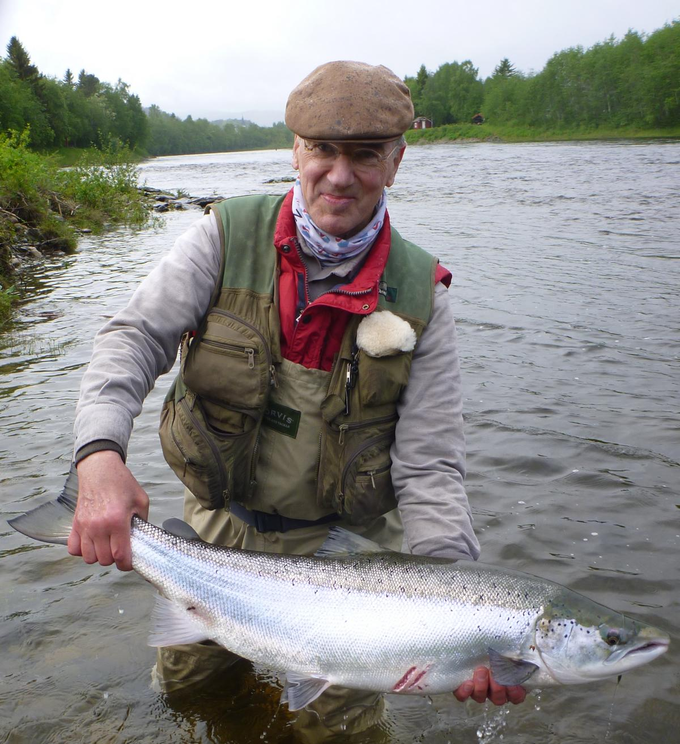 Manfred and his fish from Beat L1 of about 8kg. 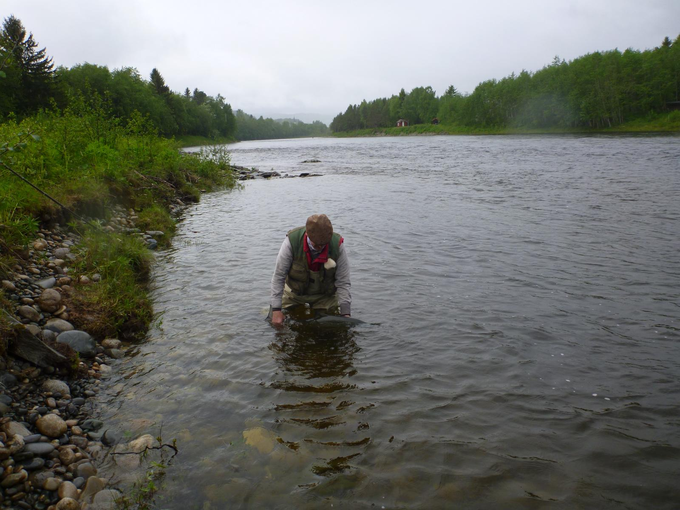 But Manfred somehow seems to be on the lucky side this season, after his fish on Beat L1 he drove down to Beat E2 and on his first pass through he hooked a superb salmon. Manfred was able to land a beautiful fish of about 9kg! 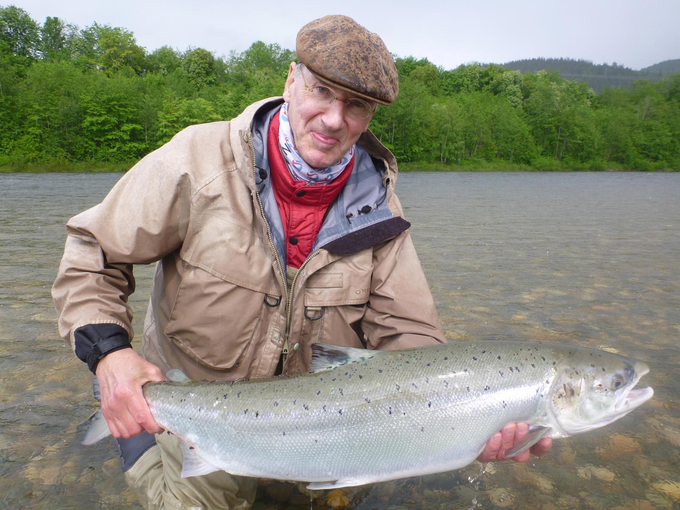 What a fat and nice fish! Well done Manfred!

The fishing did not end quite yet for Manfred that day! So he did it again, he landed his 3rd fish of the day – unbelievable! Manfred’s 3rd fish was estimated to weigh about 7kg. All of his fish were released. 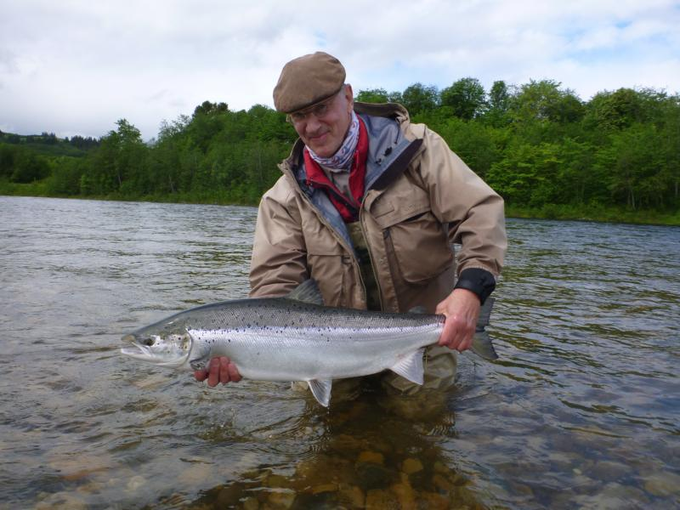 While Manfred was fighting his fish Roland Puff was into action again and caught his 2nd fish for the week, this one was caught and released on Beat E3. 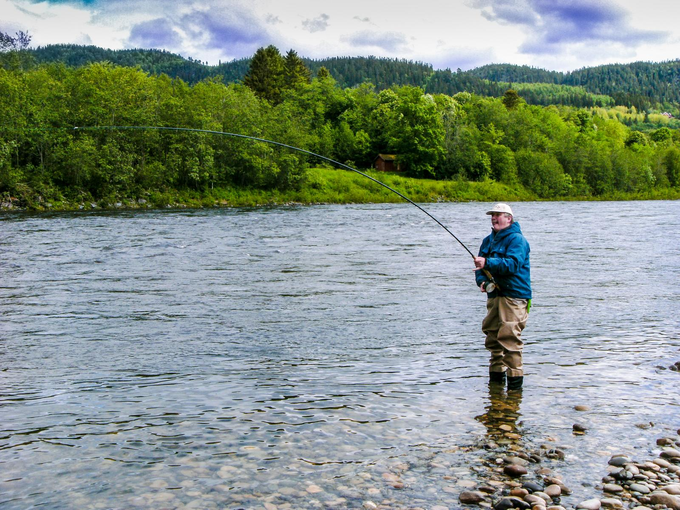 Roland in action on Beat E3 (with the sun shinning – a rare happening these days..). 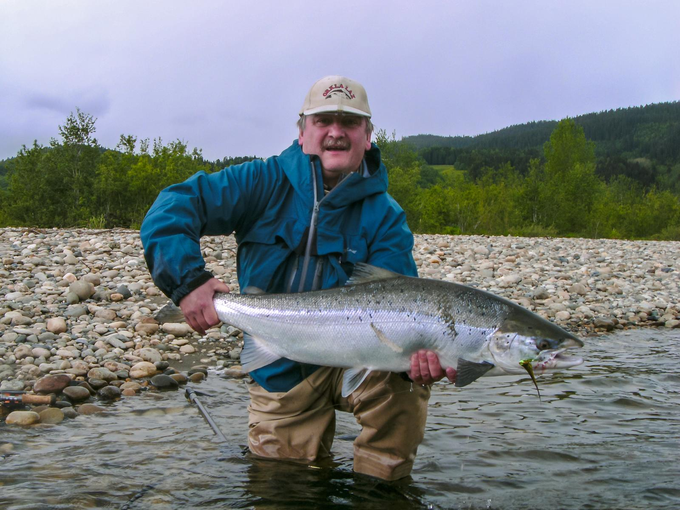 A stunning fish – estimated to weigh 9kg – but it might be even heavier. Congrats Roland!

During the evening Scott Jacobs had Beat E2 on the schedule, which seem to be the best Pool this season so far for NFC. With a lot of confidence Scott went fishing and on his first pass he was into a fish again. Shortly before landing the fly popped out and the fish was “long line released”. But Scott said I will go in and catch another one – and so he did! He hooked his 3rd fish of the day, meaning in 2 days, and his first time on the Gaula, fishing with a 15ft rod- he hooked 3 big June salmon -not a bad start! This time Scott landed his first Gaula salmon, a very nice fish of about 7kg. 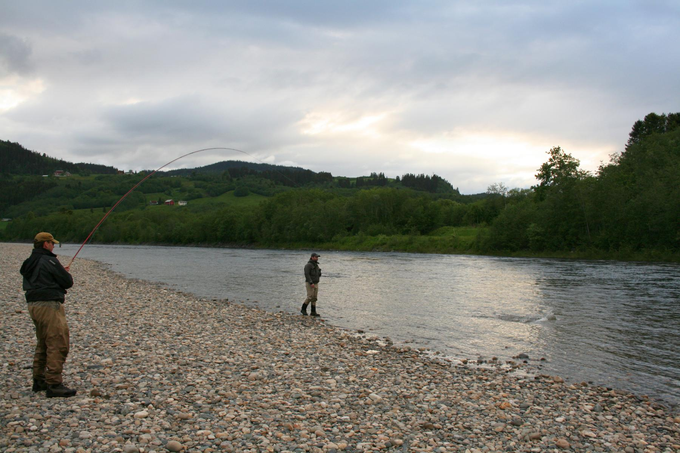 Scott “on fire” last night on the E-Beats. 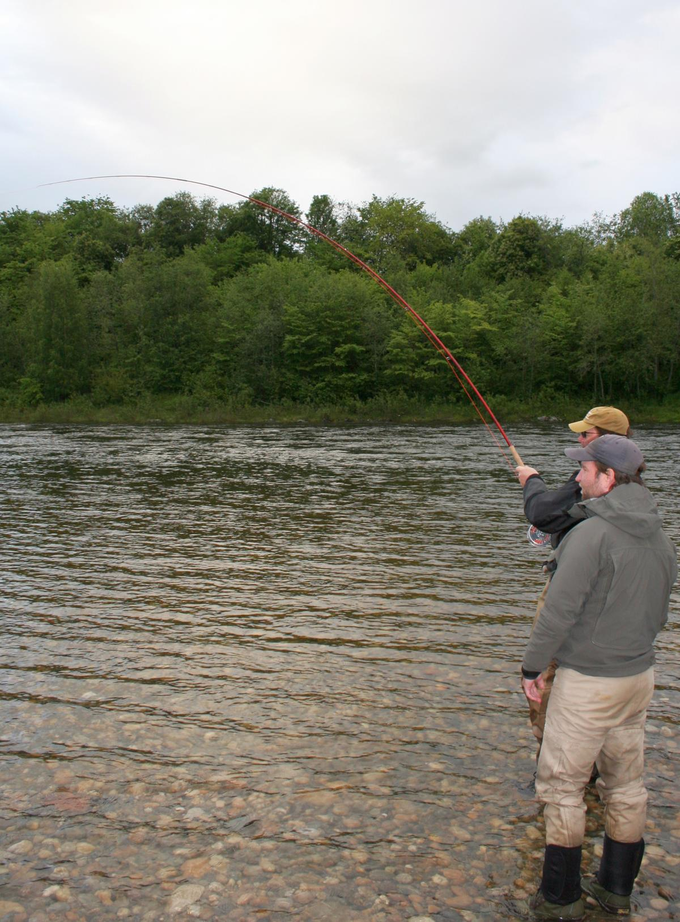 Scott still fighting his salmon on Beat E2 with his guide Peter. 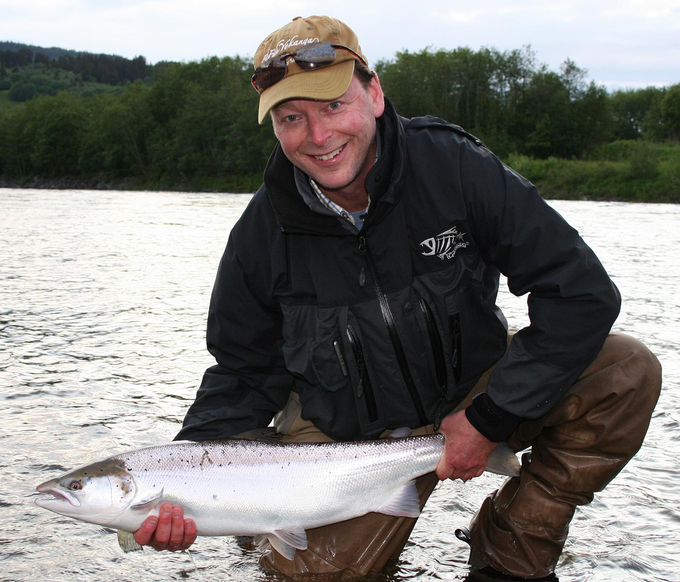 What a beautiful silver fish and clearly to see a very happy Angler! Well done Scott!

Scott released his fish and we have the feeling he will return to the Gaula soon!

The scientific test net catches some days ago have been very good and the dropping water gives us hope that the fish will finally be able to pass Gaulfossen in the next few days. Week 24 is over soon and considering the conditions it was a good week. Also the general river catches in the lower river below Gaulfossen are still good and getting even better now, as well some big fish up to 18kg have been caught lately! We believe as soon the water drops just another 30 m³, which could happen during the next 24 to 48 hours the fish may start passing the rapids and then we are expecting great fishing on our beats around Støren and Rognes as well.

Today our new fishermen arrive, some well known faces and good fishing rods – so if there are fish to catch we should get some new fish into our books this coming week!