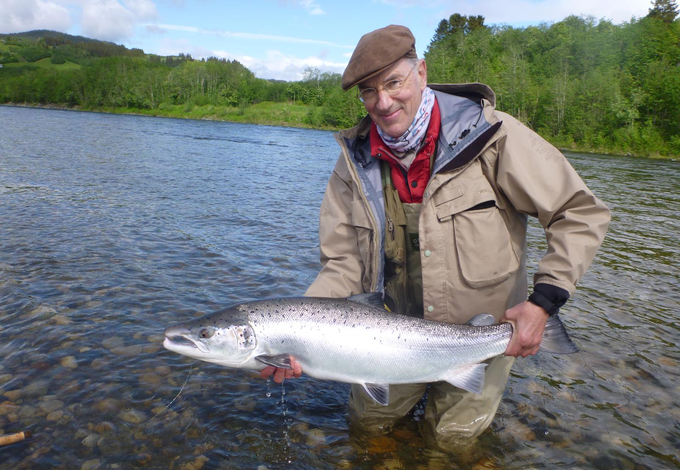 Week 23: A great opening week on the NFC Beats

Our first week on the 2015 NFC season on the Gaula will be over in a few hours. We are really glad that we can say that it was a great start to the new season and we are looking very much forward to the coming weeks!

After celebrating Jean-Luc’s superb salmon from the E-Beats it was Manfred’s turn on the next day. He experienced an extraordinary fishing session on E2 on the 5th of June. Within 6 hours Manfred was able to land 4 fresh and sea-liced salmon! What a day – and even more incredible such phenomenal fishing during the first week of the season! 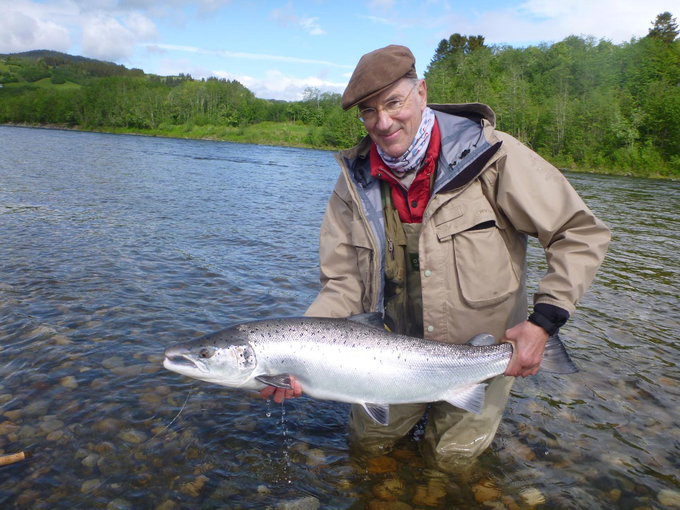 Manfred with the first of his 4 salmon he caught on Beat E2 – approx. 11kg.

The 2nd fish was hooked just a few minutes after Manfred released this fish from the picture above. 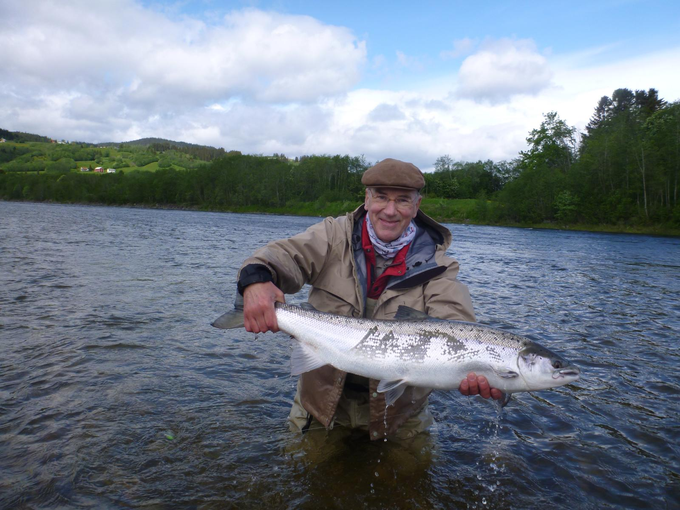 As often on the E-Beats the fish seemed to be running in groups so it is very likely to hook another fish if one gets the fly quickly back in the water. The water temperature rose from 5 to almost 7° C, which might have had the needed effect to get more fish to start moving. Obviously the salmon moved, because Olivier Plasseraud also saw fish showing and immediately hooked a salmon on Beat E1 – which unfortunately he lost. Terry Oldfield, who was fishing together with Manfred on E2, hooked a good fish which came off as well. But Manfred seemed to have all the luck that day, because 2,5 hours later he was able to catch and release his 3rd fish! The 3rd salmon Manfred estimated to weigh about 7kg. 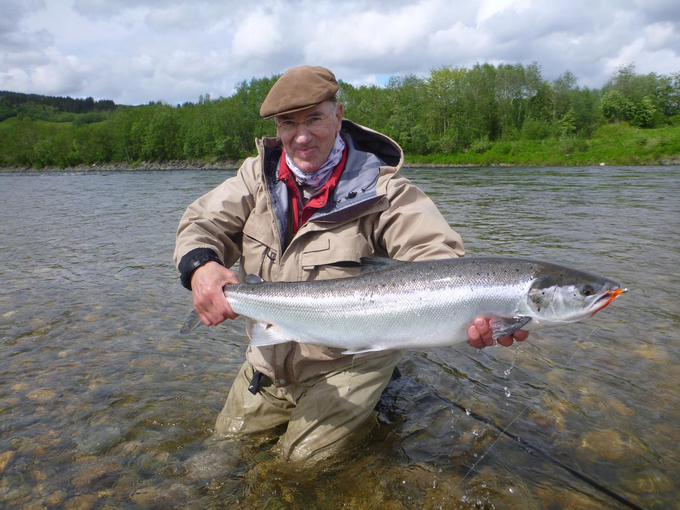 After fish Nr. 3 it was a while quiet, but there must have been constantly fish coming in. At about 17.00 hrs Manfred’s line came tight, and his rod bent once again – and he was into another good fish – as you can see in the picture below: 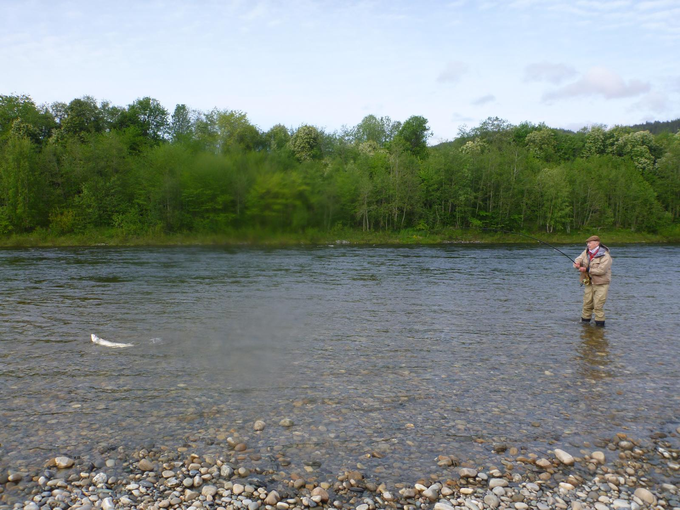 Manfred fighting his 4th fish of the day! 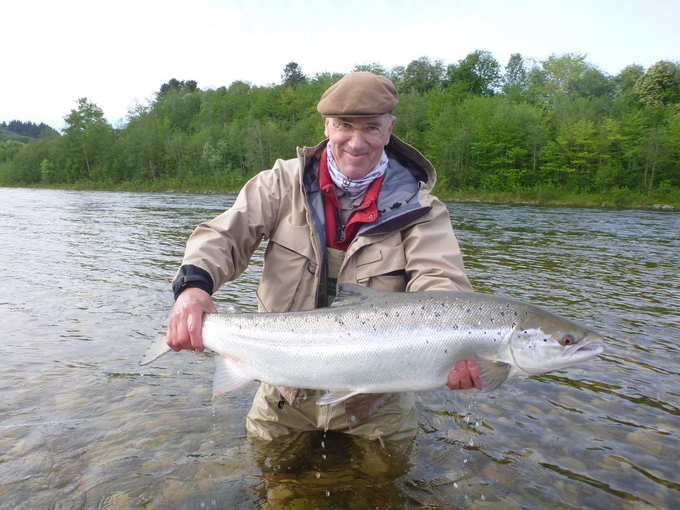 An amazing day: Manfred with salmon Nr. 4 – estimated to weigh about 9,5kg. 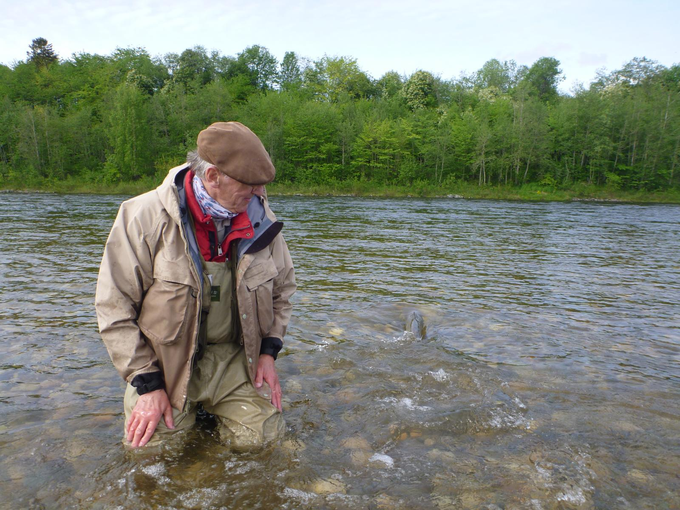 Even for a “Gaula legend” such as Manfred Raguse, a day catching and releasing 4 fish in a few hours does not happen often-if ever – especially not this early in the season and with that high average weight! It simply does not get much better in salmon fishing than Manfred’s hours down on E2! Well done Manfred – congratulations!

Our Norwegian guest Øyvind Berg arrived Friday evening and Saturday morning he had the chance to fish Beat E2. He hooked a nice fish and shortly later he was also able to land his first Gaula salmon of the season! 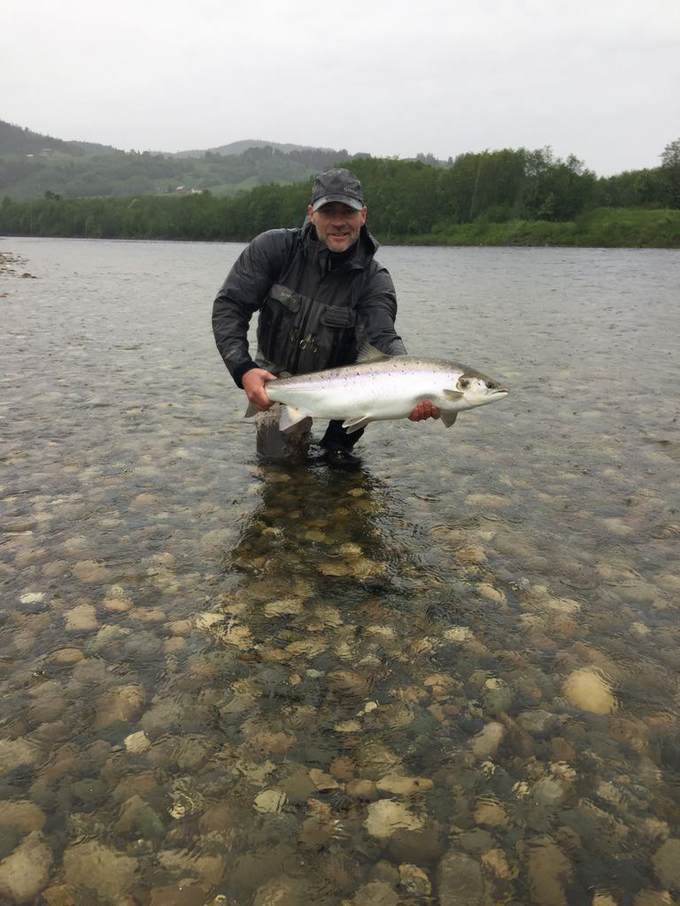 Øyvind Berg with his nice fish weighing about 7kg.

We can truly say that the first week including our 9 landed fish has been a good opening, especially if one considers the tough conditions we have been experiencing. NFC as well as most of the other fisheries on the lower river should have a good feeling for the beginning salmon season 2015. We all think that those catches are a good sign and we finally feel the Gaula seem to be in good shape again and we will have some great weeks ahead!

Last night in rained heavily and the river rose up to 460m³ at the Gaulfossen. So fishing on our lowest beats was due to the dirty water was almost impossible. But we are sure it will clear up during the day and drop down to a fishable level for the evening, before our next guests arrive and the new week begins!

We still have some spaces left during the coming weeks and throughout the season – so if any of you have been waiting for good news from the river bank before booking a trip to the Gaula – it is now the right time to book a trip and decide to come over! We will try to accommodate you in your preferred time!

We will keep you posted.

Your team at the NFC