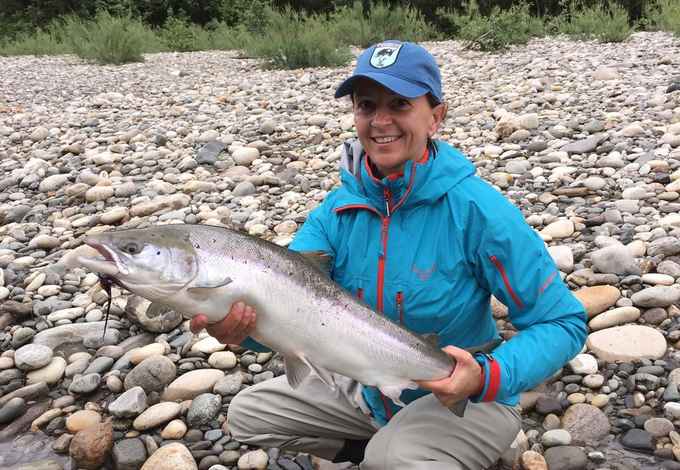 Week 28: A great week with lots of fish landed and happy fishermen and fisherwomen!

Week 28 turned out to be the best week of the season so far. We have experienced Gaula fishing at its best and our fishermen and women seem to have had a great time. The week’s conditions started off with relatively cold weather and still high water, but this did not affect fishing negatively. Rather, we were able to land fish in almost all of our beats! Andre Scholz started the week with a salmon from our Railway Pool weighing about 8,5kg. On the next day he caught the next 2 fish to write in our books, a grilse and another good fish of 7,2kg on our beat BS1. 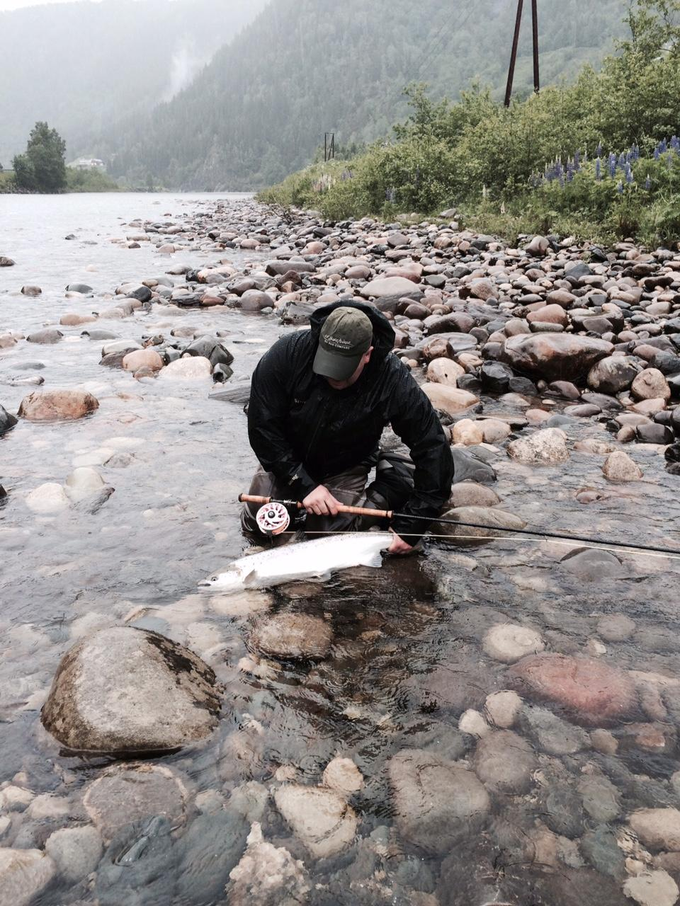 Andre with his nice fresh fish from BS1.

Next it was our German guest, Stefan Ludwig, who was able to land his first Gaula salmon on B1. He estimated to weigh the fish about 7kg 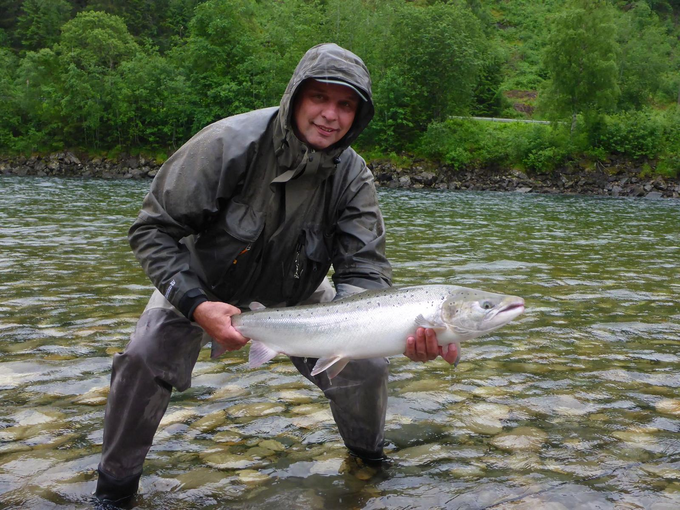 Timo Järvinen from Sweden had a go at our Lodge Pool- with great results. A nice fresh fish, which he estimated to weigh about 6kg (but it looks bigger)! Anyway, a great fish! 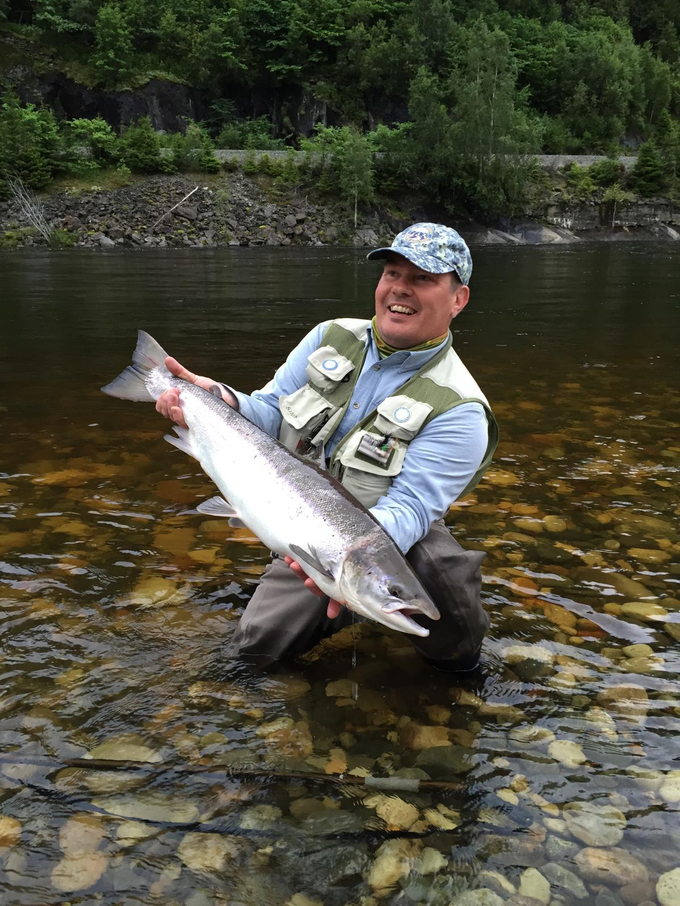 Timo Järvinen with his fish from our Lodge Pool.

During the week we had big group of French fishermen- and women as guests in our lodge. They had a good time and all caught fish. Francois Deloup and Fabrice Bergues had an excellent day on the Beats BS2 and BS1. Fabrice started the day with an approx. 5,5kg fish on BS2, Francois was also fishing BS2, and was able to land two good fish of 5,5 and 8kg. During the evening session they caught even more fish, Francois with another salmon of about 5kg and Fabrice with a big fish of 101cm and about 10kg weight! What a day!

Also Manfred Raguse caught a fish on that day on BS2 weighing about 6,5kg and regular Japanese guest Shusuke Hirano had a fish of about 6kg on Beat B1.

Another member of the French group, Fredric Andre was able to land a nice fish of about 6,5kg at Langøy (Beat B1). 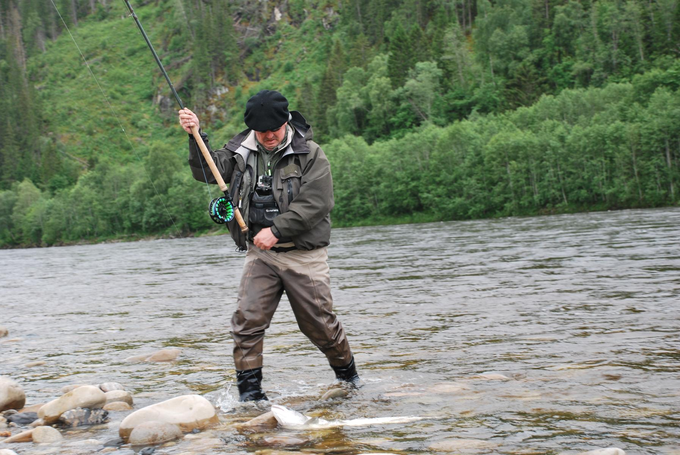 Fredric landing his fish on B1. 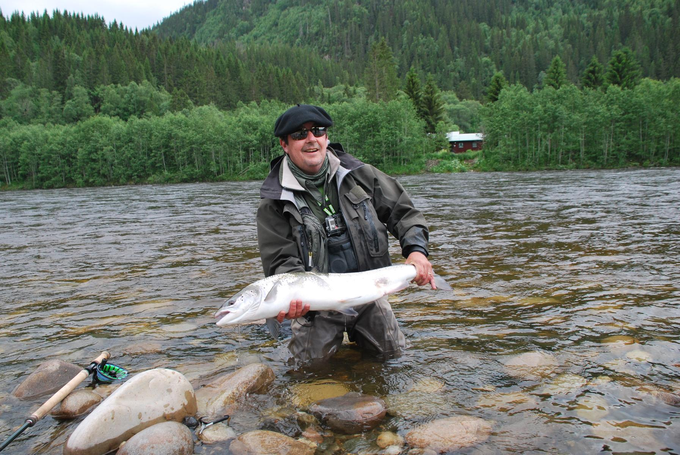 Fredric with his fish of 6,5kg in the lower part of B1.

The next day started with another fish for Francois Deloup with great gillie/guide help of his wife Sophie down here on our Lodge Pool. They estimated to weigh the fish about 5kg. 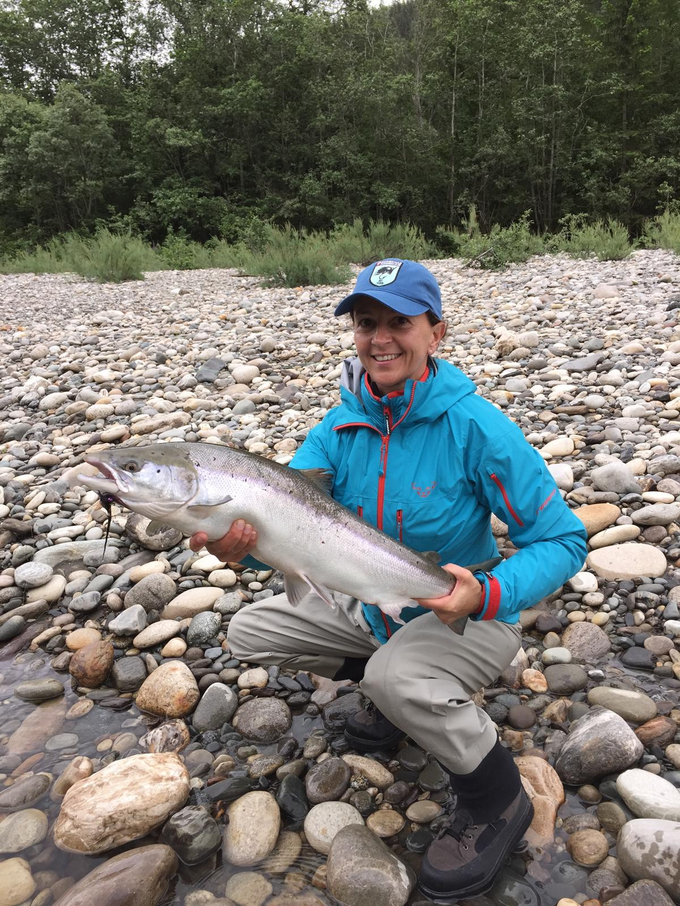 Sophie Deloup with their “team work” salmon from our Lodge Pool.

Shusuke Hirano also caught a fish on our Beat E2 of about 7kg and David Parkiet had a great fish on BS2. David’s fish was estimated to weigh about 10kg and measured 101cm. 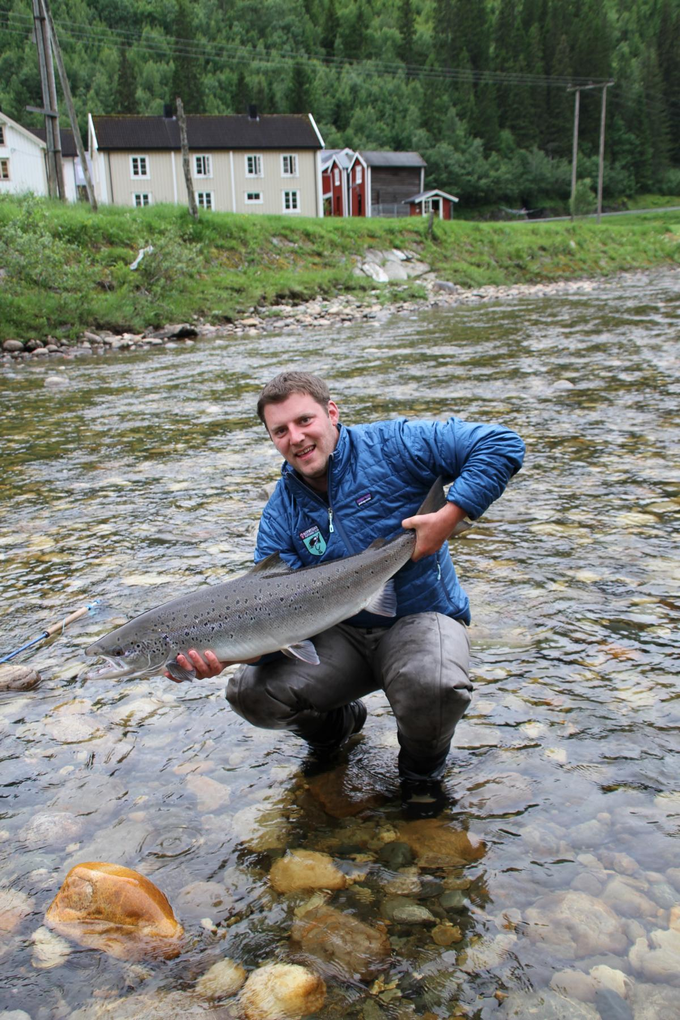 David with his superb salmon from BS2 – 10kg.

Then it was Christoph Mathey who was able to hook up and land a 9kg salmon on B1.

On Beat B2 Andre Scholz landed a 9,5kg salmon. As well as two more grisle were also landed by Christoph Mathey and Paul Nichols. Timo Järvinen was able to land his next salmon on B1 weighing about 5kg. 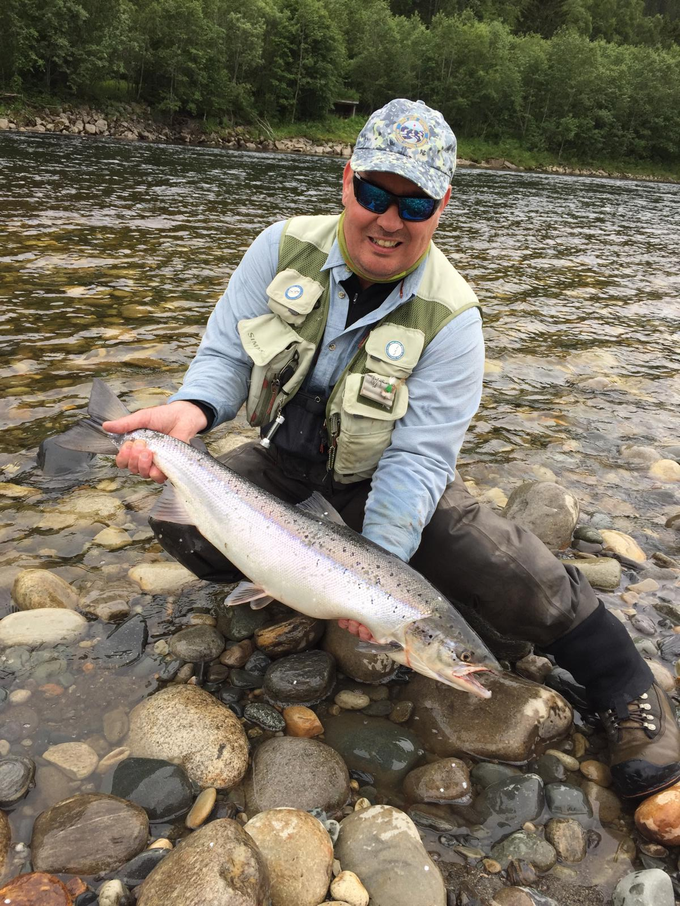 Timo with his 2nd fish of the week from Beat B1.

The early morning of the next day should be a good one for Heinzi Jörling on Beat BS1. He caught a nice fresh fish of about 6kg on Beat BS1.

David Parkiet had a good day and caught two fish at Langøy (B1). The first fish was a good fish of about 7kg and the 2nd one was a good grilse of 3kg. 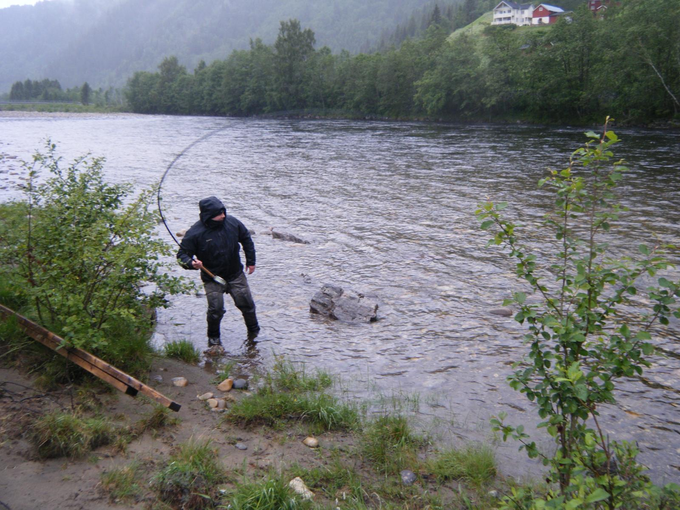 Andre with a bent rod – shortly before landing his salmon on BS1. 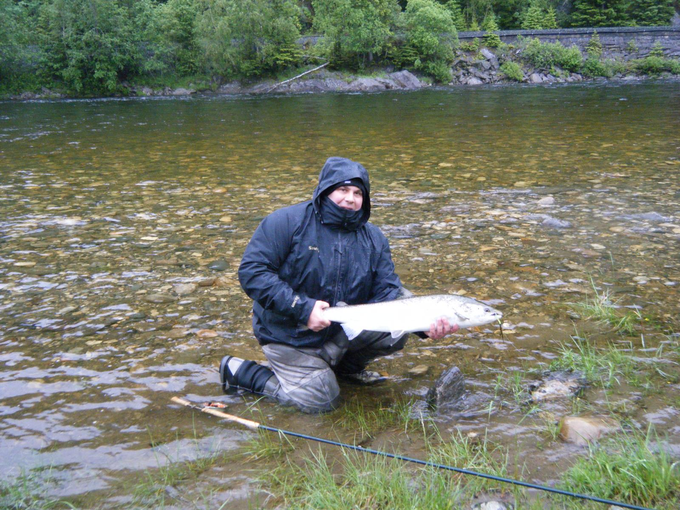 Andre with his salmon of about 7kg.

Shortly after, David Parkiet fished Beat BS1 and caught his next fish weighing about 8kg. 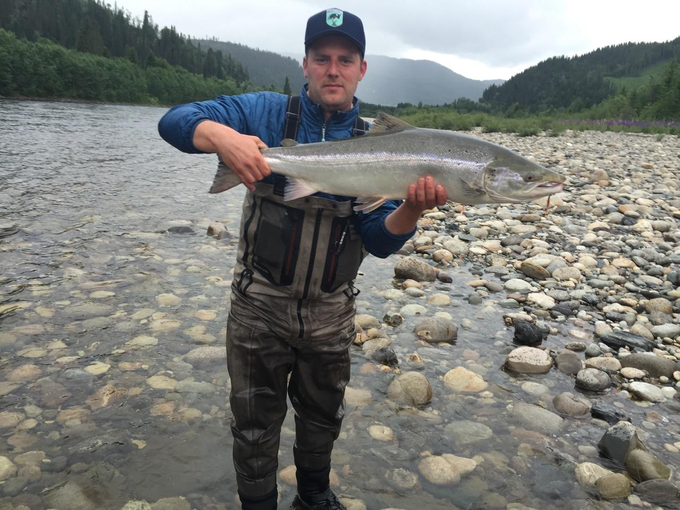 David with his next fish – this time it was BS1 and a about 8kg fish.

Francois Deloup seemed to be on fire this week- and caught his next two salmon on Beat A1. 5 and 6,5kg during the afternoon session! 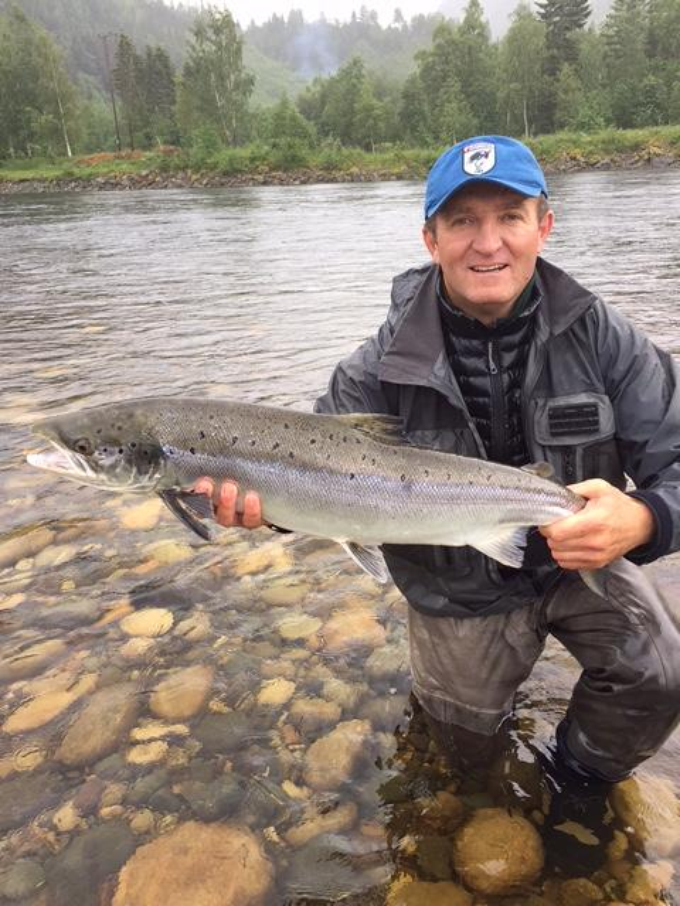 Francois with his 5kg fish. 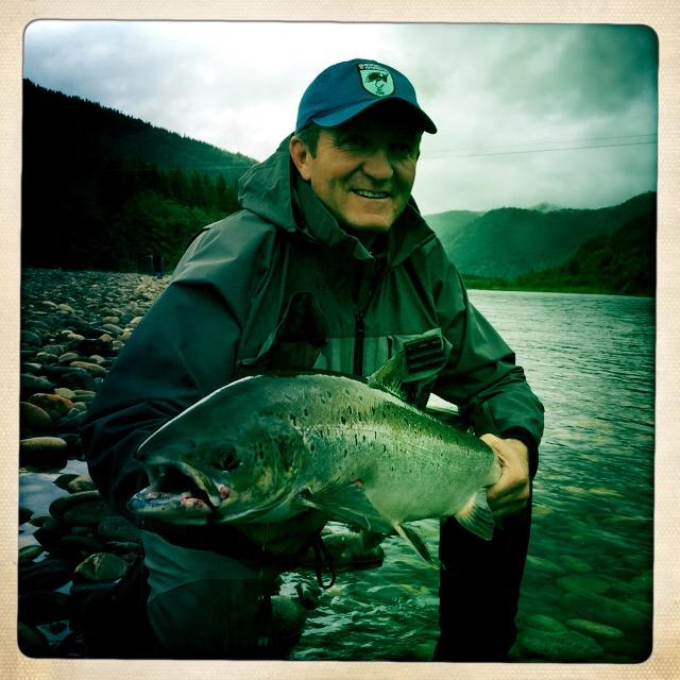 Francois Deloup and his fish of 6,5kg from A1. 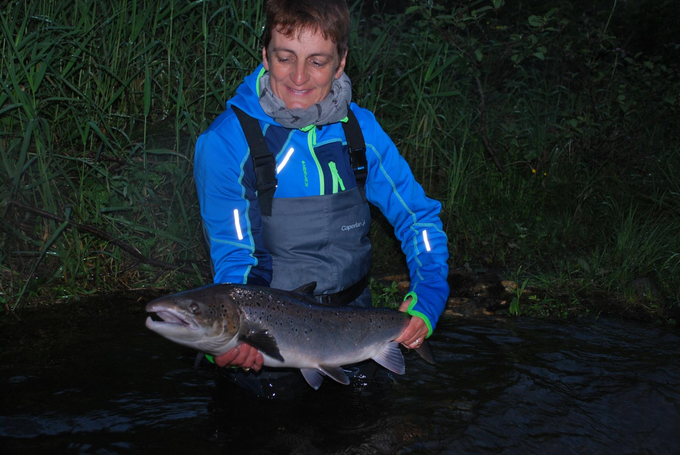 Natalie with her salmon from BS1!

NFC’s Daniel Stephan was able to get out fishing after work, and accompanied Andre to Beat L1. It was Daniel’s birthday (which he likes to keep quite and hopefully do some fishing on!) and after fishing every birthday for the last 10 years working at NFC, without a birthday fish- this was the year!! On the 2nd run through the top channel at L1- he hooked a fish. After a short but good fight Daniel landed his first birthday-salmon of about 6kg! 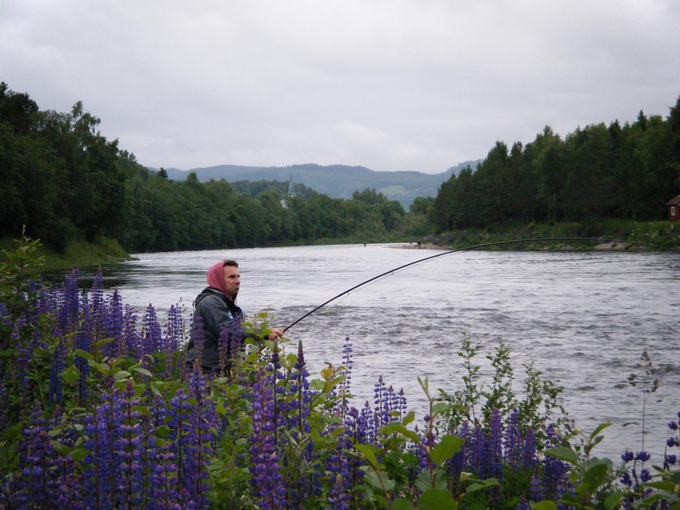 Daniel into his fish on Beat L1. 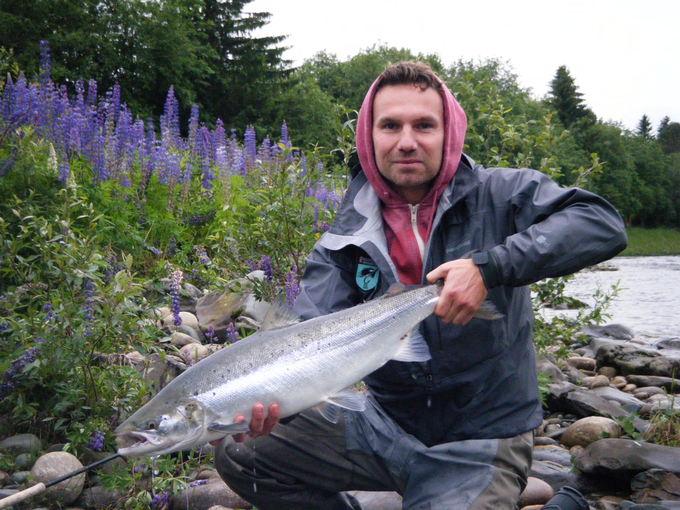 Daniel with his salmon of about 6kg from Beat L1.

Andre and Daniel continued fishing but not much happened anymore so Andre decided to head back home. Daniel said he would make one more round. Just after Daniel started fishing, he called Andre to tell him that he should turn back to help him as he was into his next salmon and it felt big – and it was! After about 20 min Daniel managed to land our biggest salmon of the season so far, measuring 112cm and estimated to weigh about 14,5kg – What a birthday! 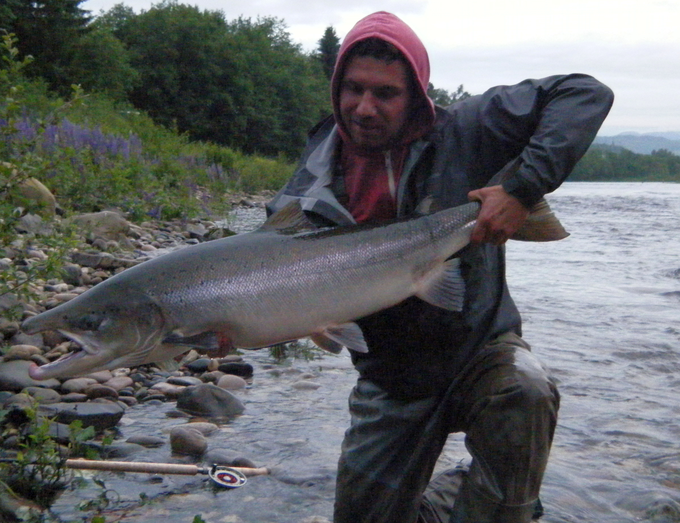 Daniel and his big birthday-fish – about 14,5kg!

The next day was a bit slower as the water temperature cooled down quite a bit. But Fredric Andre was able to catch a nice fish on Beat BS2 of about 6kg. 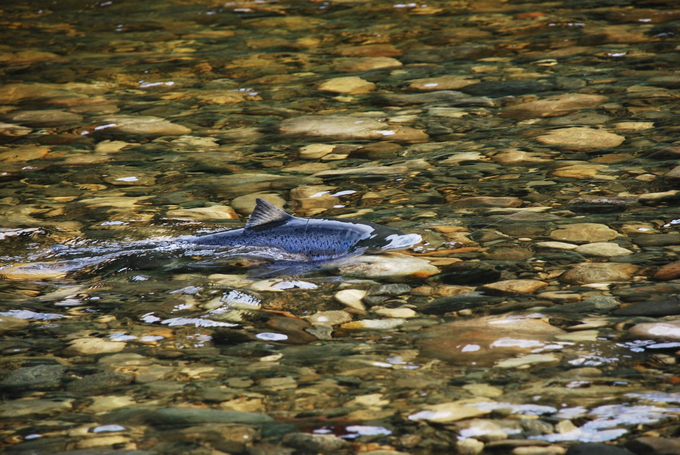 A nice shot: Fredric’s fish forced into the shallow water. 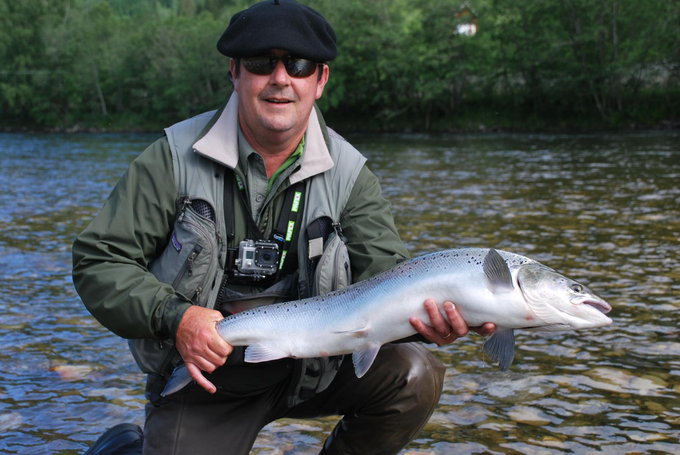 Fredric Andre with his fish from BS2.

The last fish of the week was a grilse caught by Jean-Luc Poullien.

We are really glad to say that we had a fantastic week of fishing and due to the upcoming weather forecast and the net-catches of the science netting in the outer Trondheim Fjord which continue to be full of fish and the amount of fresh fish we caught and see in the river, we believe the great fishing will continue! We are looking very much forward to the weeks to come – already week 29 started with another great fish last night – reports will follow!