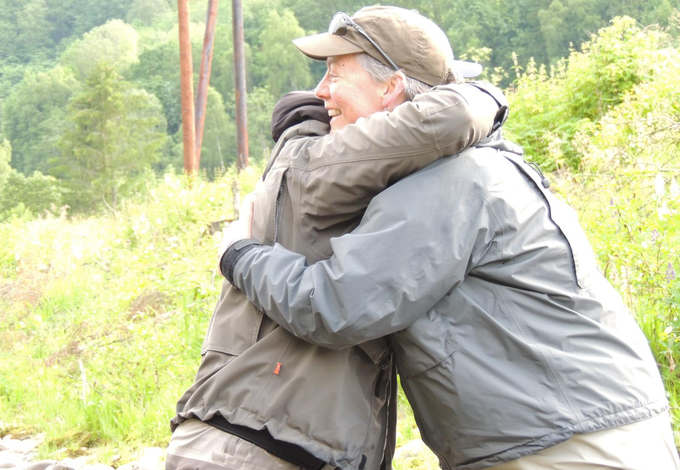 Week 30: A week with changing water conditions and some very good fish!

The fishing last week was characterized by non-stop changing water levels, which meant the fishing was not always easy as the salmon never really seemed to settle down into the pools and did not take the fly aggressively.

Nevertheless, we experienced another good week with some very nice fish caught on our beats, as well as grilse, which have begun to show up in bigger numbers. Markus Leukhardt started the week on Beat D1 with a good fish between 8,5 and 9kg, measuring 98cm. 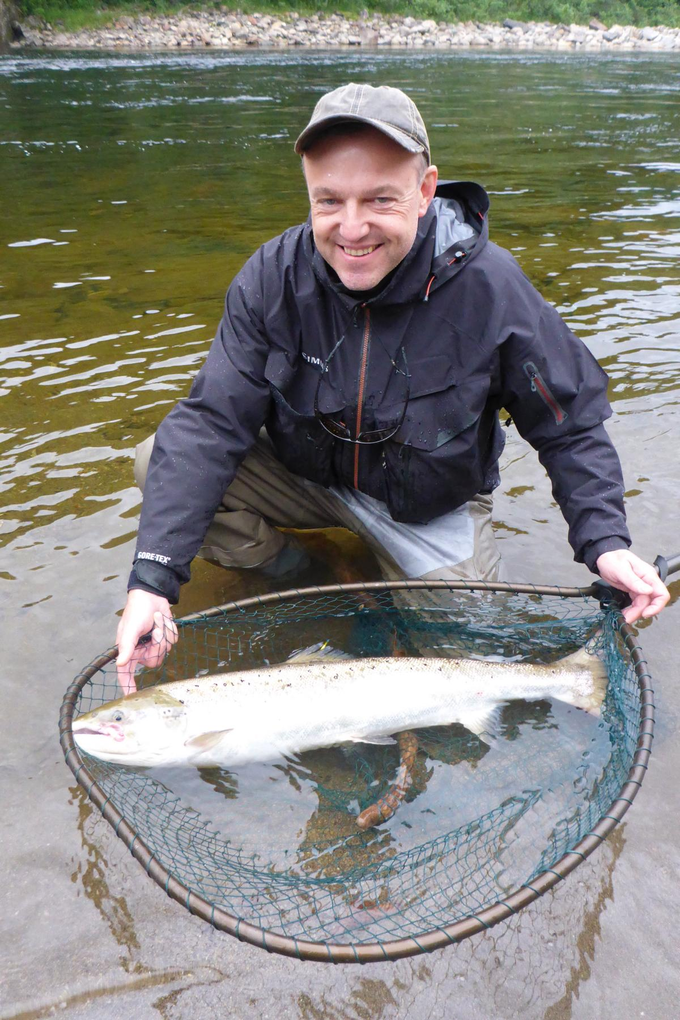 Markus with his nice salmon from Beat D1.

Also Peter Ericson caught a nice fish on our Lodge Pool that evening, which he estimated to weigh about 9kg.

Our German regular guest Lutz Schuhmacher caught a fish of 70cm on Beat BS1 on the next morning. 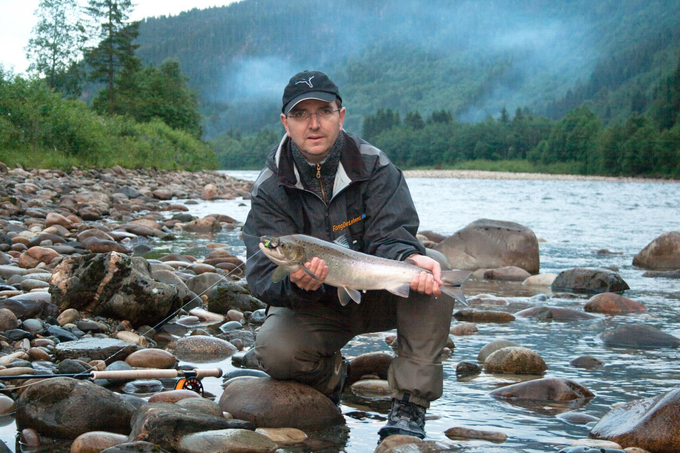 Lutz with his fish from BS1.

Also Bernd Kuleisa’s course guest Tobi Vetter had good day and was able to land 2 fish! A grilse on Beat B2 and a nice fish of about 5,5kg on Beat D1. 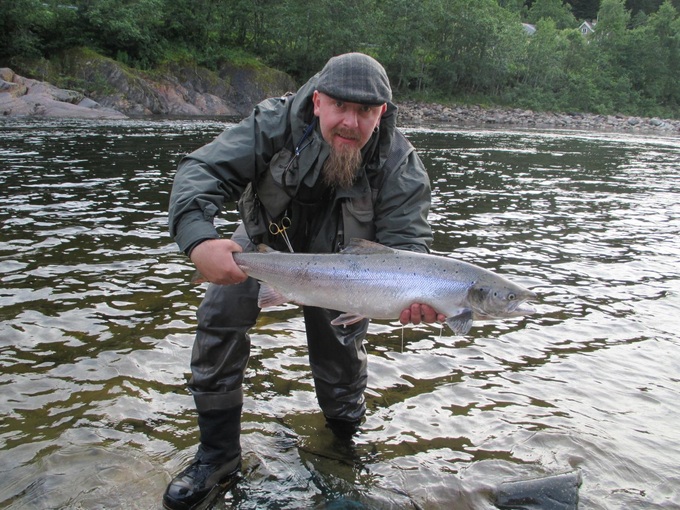 Tobi Vetter with his 2nd fish of the day.

NFC’s Daniel Stephan also caught 2 grilse and another good fish of 6,5kg, while fishing before and after his shifts at the lodge. Two more grilse were caught by Bernd Kuleisa and Peter Ericson. Also, long-time regular, and NFC friend, Johannes Kahrs has been visiting us for a couple of days and caught a grilse and another fish of about 4,5kg. 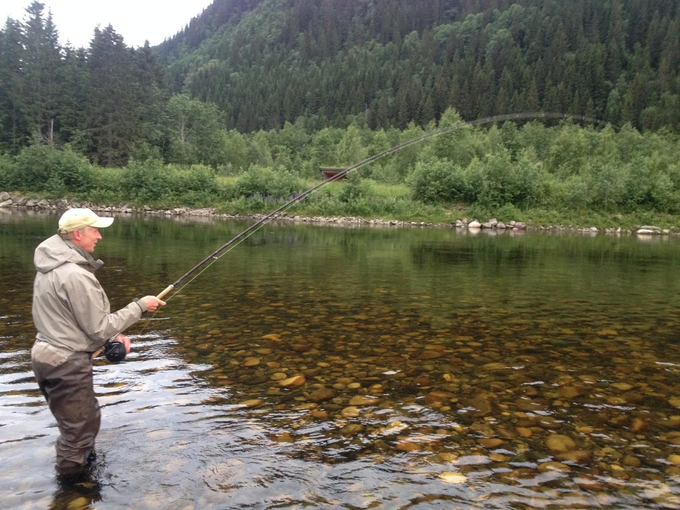 Johannes hooked his fish on Beat A1. 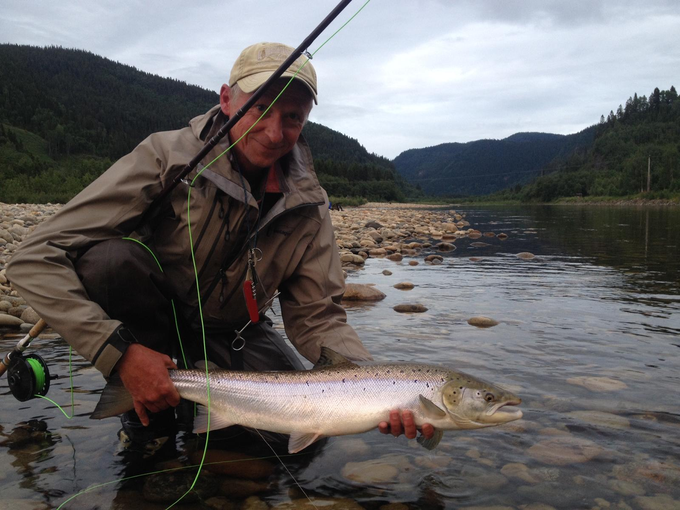 Johannes with his fish of about 4,5kg.

The next 24 hours were a great time for Hartmut Schuhmacher, as he managed to land two nice salmon! The first fish was landed in the evening on Beat E2 in the lower Gaula. 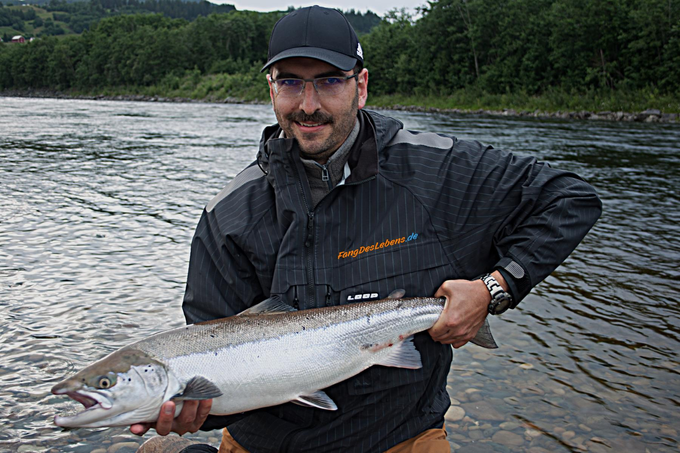 Hartmut with his fresh and sea-liced salmon from Beat E2 – approx. 6,5kg.

The 2nd fish he landed on beat BS1. This fish was slightly bigger and he estimated it about 7kg. 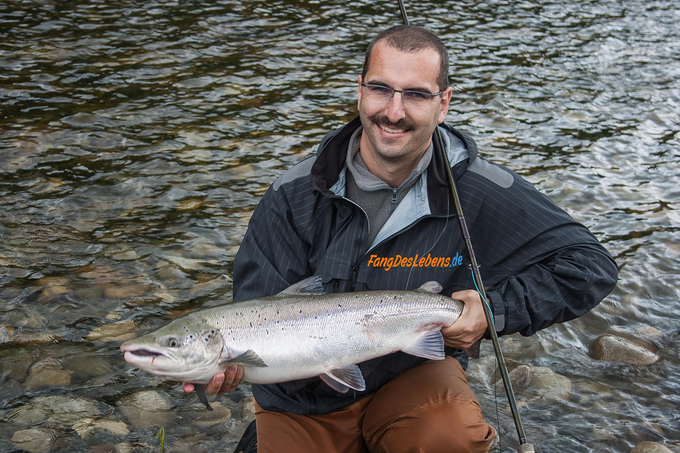 Hartmut with his good fish from BS1.

During the same day our Norwegian guest Tom Jørstad was successful on Beat BS2, and he was able to catch and release a fish of about 5,5kg.

A few more grilse were also caught by Daniel Stephan, Bernd Kuleisa and Tobi Vetter. After work our chef Per Högvall hooked a fish right below our Lodge. After an exiting fight from the high bank Per landed a nice fish of about 7,5kg, assisted by guide Simon Kitcher. 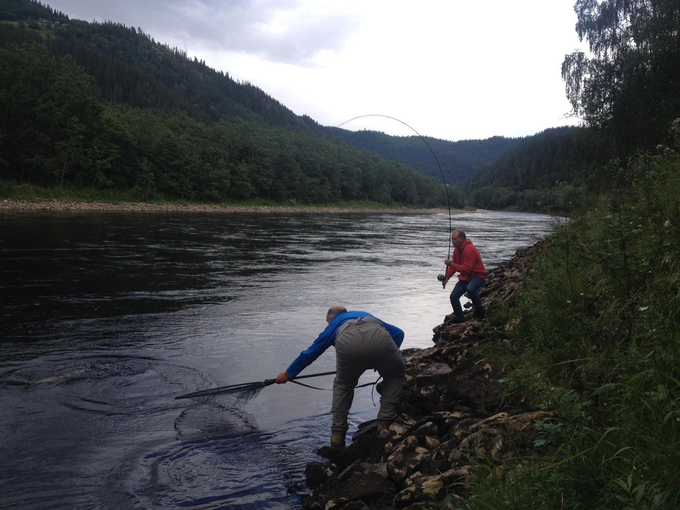 Per is just about to lead the fish into the net… 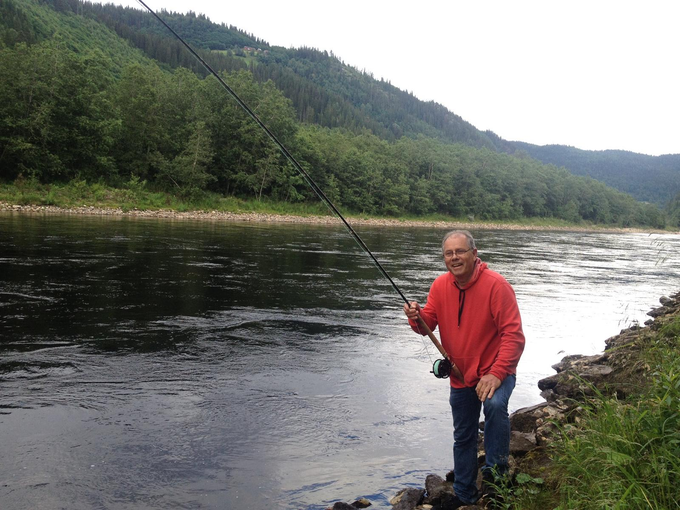 A happy face – the fish is landed in the net – well done Per! 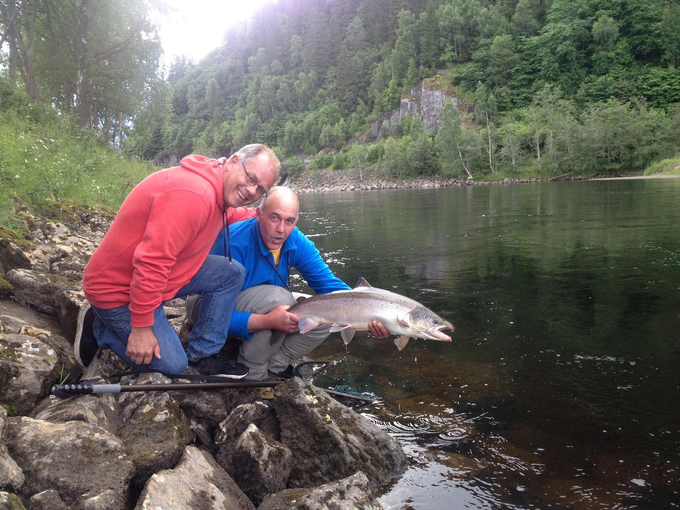 Per Högvall and Simon Kitcher with Per’s nice salmon right below the Lodge.

The next day was good day for Dory Shipley. She was able to land her first Norwegian salmon on Beat BS1! 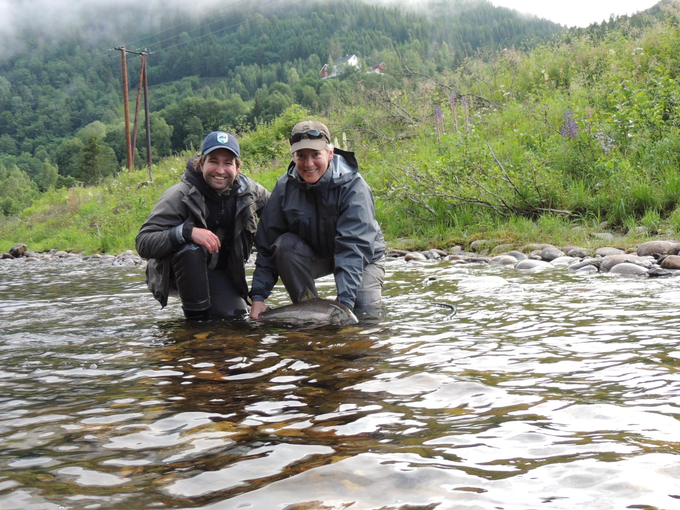 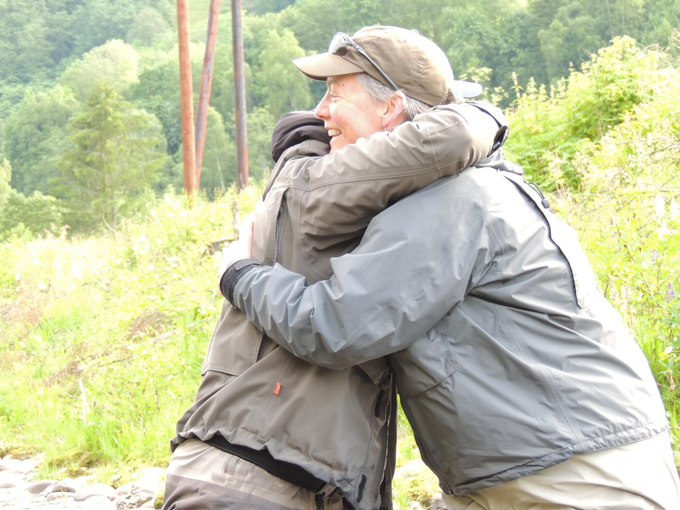 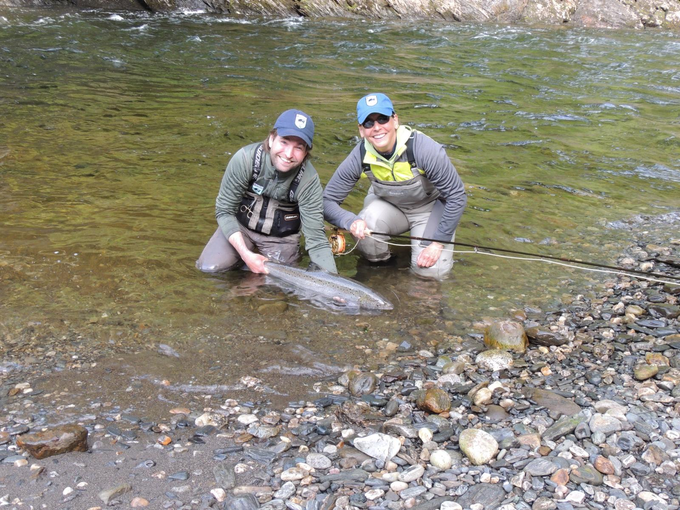 Lynn and guide Peter with her Bua salmon – approx. 6kg.

The weeks last salmon was landed by Bernd Kuleisa. Again a big fish towards the end of the week, this time Bernd was lucky on BS1 and caught the biggest fish of the week with a length of 103 cm and an estimated weigh of about 11kg. A great fish – congratulation Bernd! 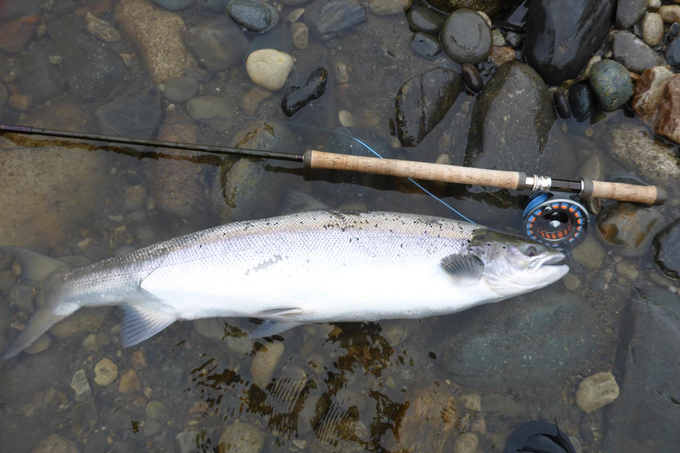 As we write this update- the river is still continuing its yo-yoing-  as soon as it drops down some heavy rain makes the river rise again. These unstable and somewhat challenging fishing conditions are what we have been experiencing the last few weeks. We think some more stable conditions would improve the “taking mood” of the salmon – which are obviously there, but they are “moody” at times, so it has again been a week where you had to be on the river at the right spot at the right time.

As things look we should expect good conditions throughout the remainder of the season.

We still have open rods and as conditions for August are very good we think we will have a great time coming up with some good August fishing on the Gaula! In case you have been thinking about a short notice trip – feel free to contact us. We are able to accommodate and would be glad to enjoy some good fishing time together before the end of the season!