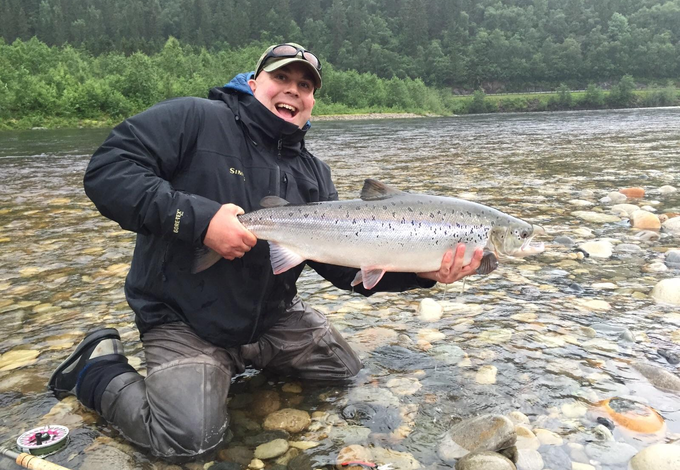 Week 29: Another great week on the NFC Beats

Week 29 started off a bit slower than the week before, but we still experienced another exiting fishing —including some very big fish! For example, this big fish of about 13,5kg which was landed below our Lodge by “Big” Per Arneberg (at the age of 84!). 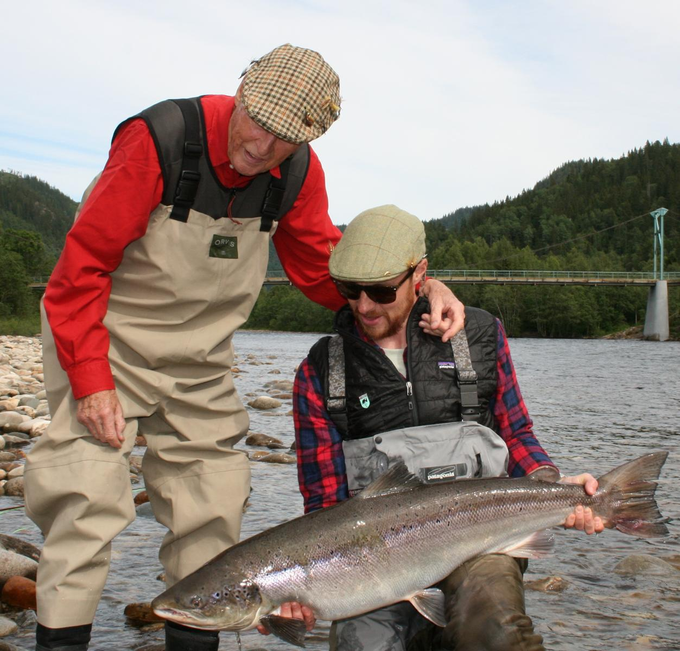 The Per Arneberg’s (junior and senior) with the big female fish of 13,5kg.

The week actually started off with 3 fish for Fabrice Bergues, at the bridge below the Lodge. The first one he estimated to weigh about 9kg by measuring 96cm. On the next morning he got two more fish of about 6 and 5kg in the same spot. 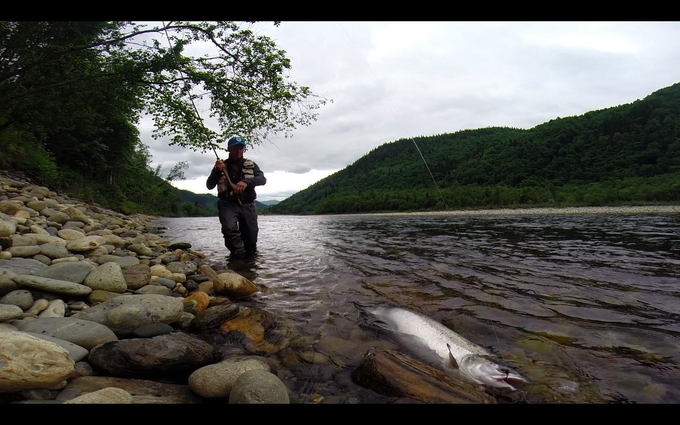 Fabrice landing his big fish on Sunday night, below the Bridge. 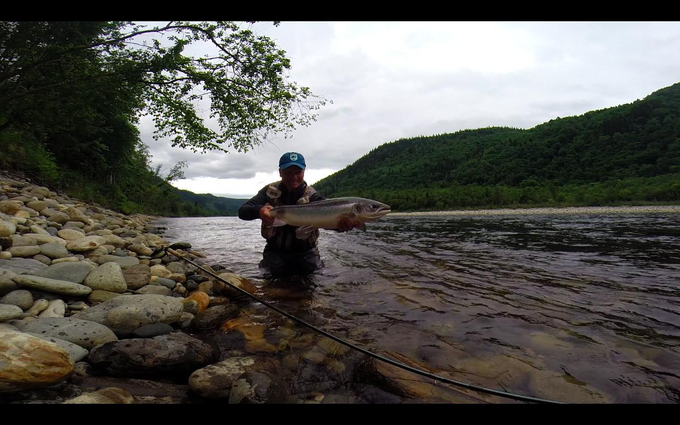 Fabrice Bergues with his salmon of about 9kg from “Grana Bridge”.

Also Ernie McFadzen, regular guest from Canada caught a good fish in the same spot, weighing about 7kg on the same day.

Per Arneberg and Daniel Stephan fished Beat BS2 on the next morning and Per hooked a fresh and sea-liced salmon between 5 and 6 kg and was able to land it shortly there after. 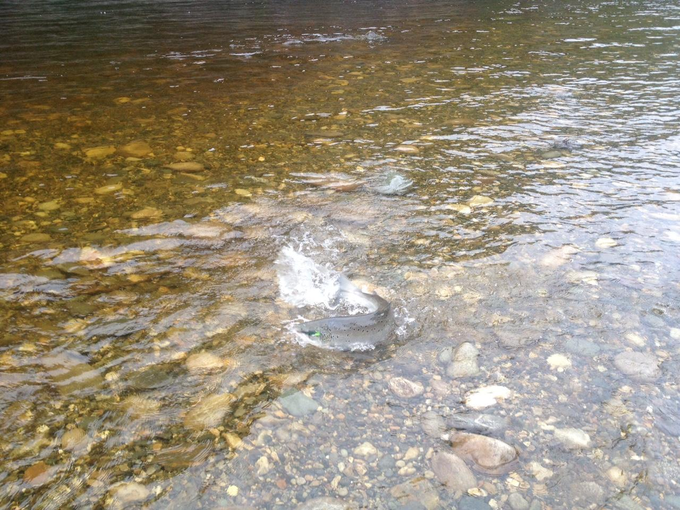 Per’s fish just about to be landed… 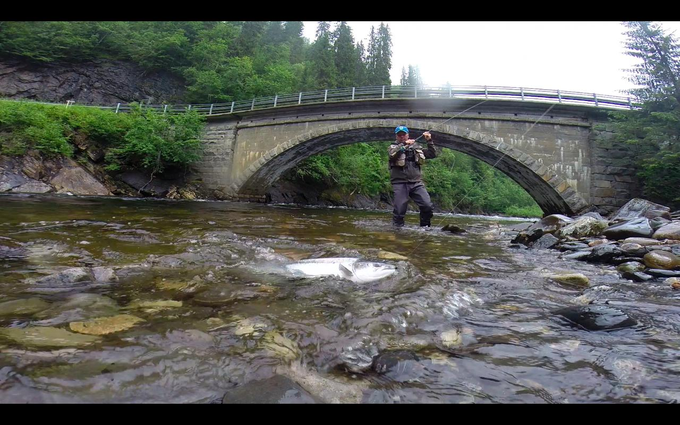 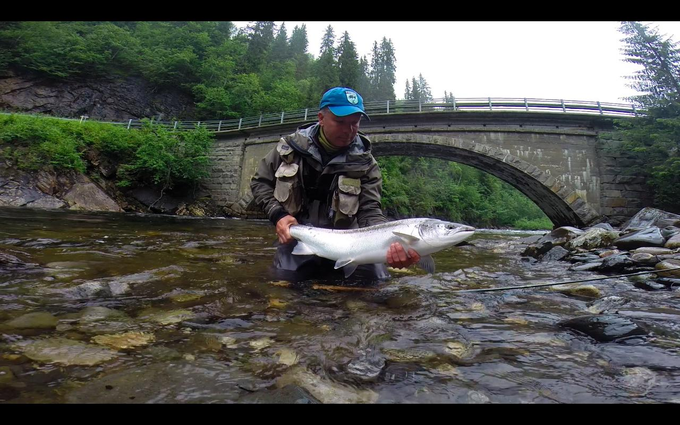 Fabrice with his Bua salmon – what a nice fish! Well done, Fabrice!

The next day it was again Ernie McFadzen who started the day with fish from the “Grana Bridge Pool” weighing about 7kg. His fishing partner Greg Dixon was successful on our Lodge Pool and caught a fish about 8kg. The water was rising quickly that day due to heavy rain falls and several more fish have been hooked but came off. But Andre Scholz managed to land three of his 4 hooked salmon on New Pool that night and he caught a seatrout of about 2kg as well. 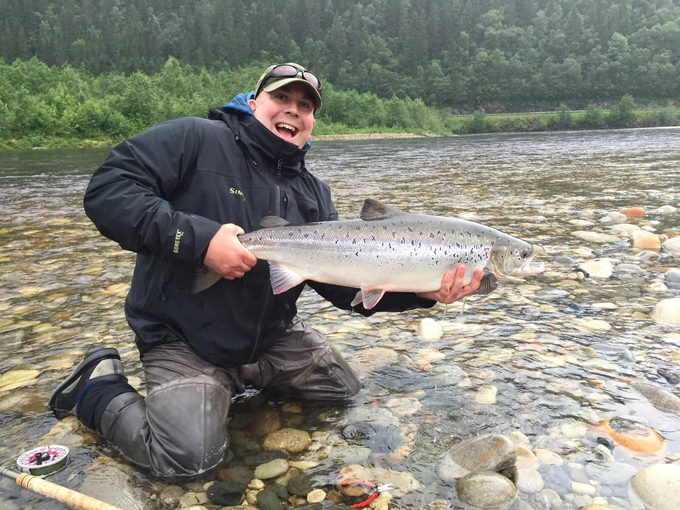 Andre Scholz with his first fish of the session – this one weighing about 8,5kg. 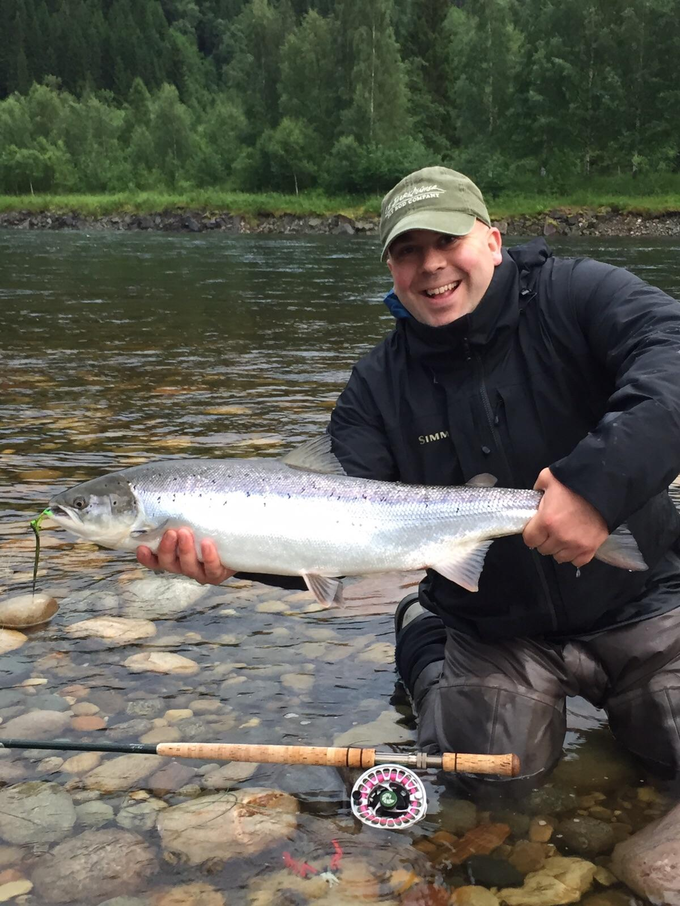 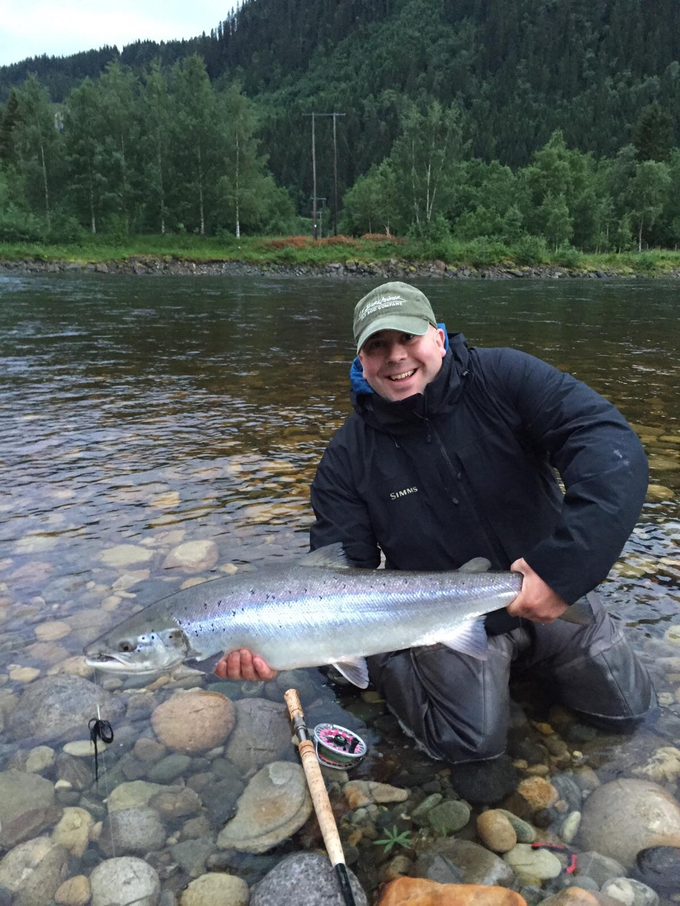 On the next morning Stefano Mantegazza was able to land a fish on Beat BS2 weighing about 5kg and NFC’s Daniel Stephan landed a good fish of about 7,5kg on Beat B1.

Our Scottish regulars “the Lyons” – Stuart, Kirk and Blaine had a fantastic morning session. All 3 landed a fish – which means that 3 generation, grandfather, father and son landed each a fish within a few hours! That has probably not happened often before on the Gaula – what a great experience! 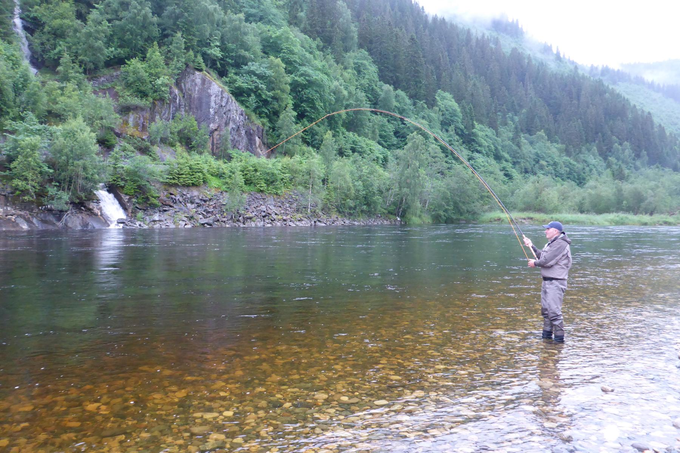 Kirk Lyon into the fist fish of the “3 generation day”. 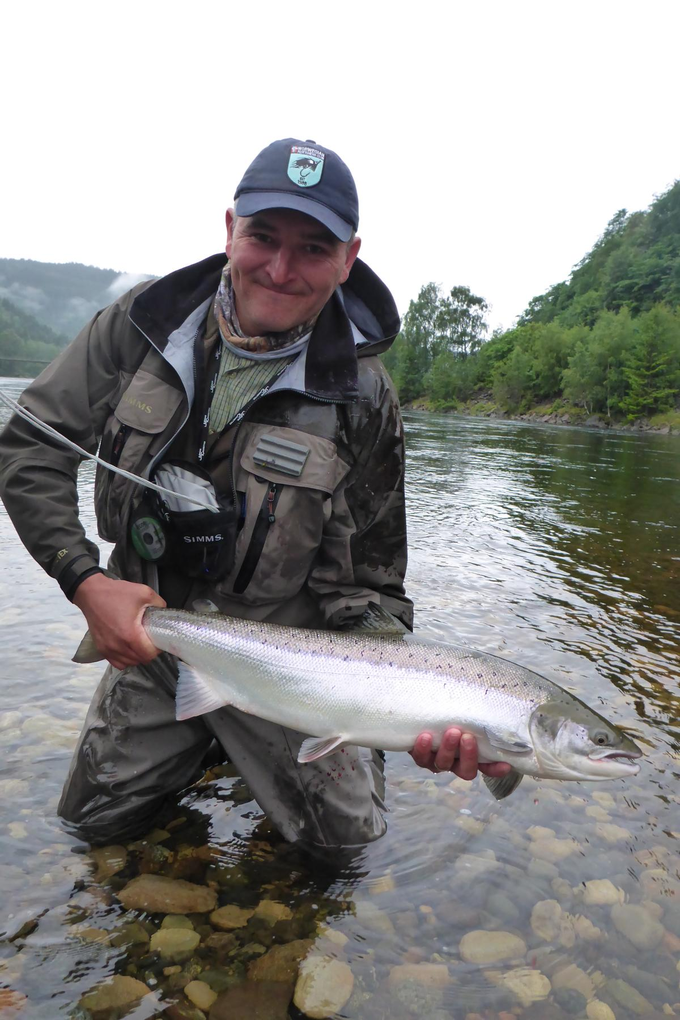 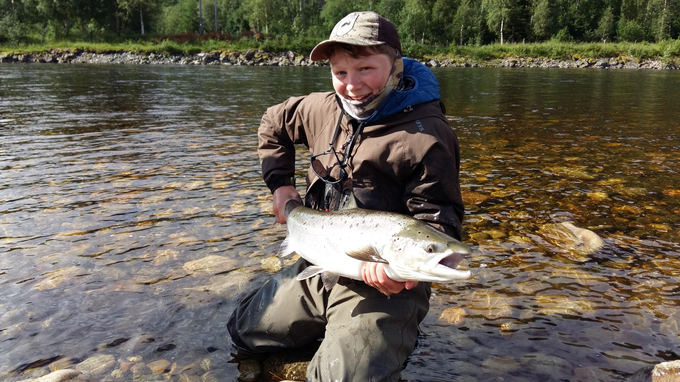 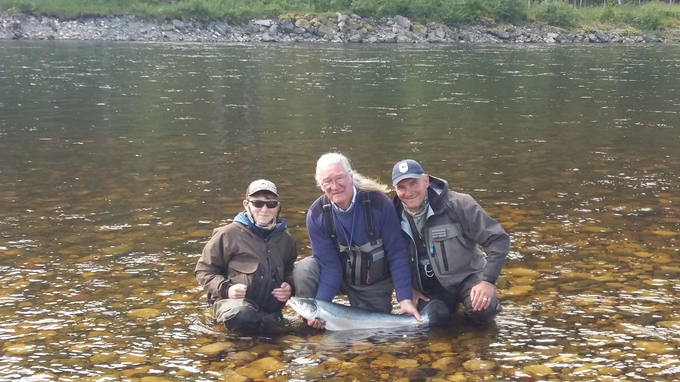 Stuart Lyon in the middle with his salmon caught shortly after Blaine’s salmon – about 7kg.

Peter Ericson caught another grilse and Manfred Raguse was able to land a nice fish on Beat BS1 Measuring 96cm. 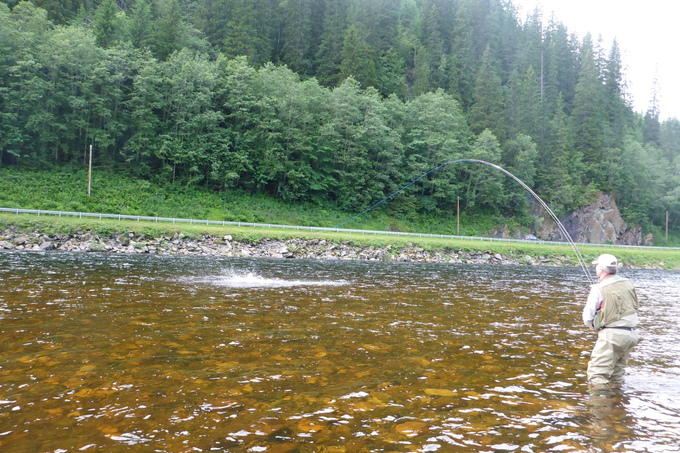 Manfred fighting his fish on BS1. 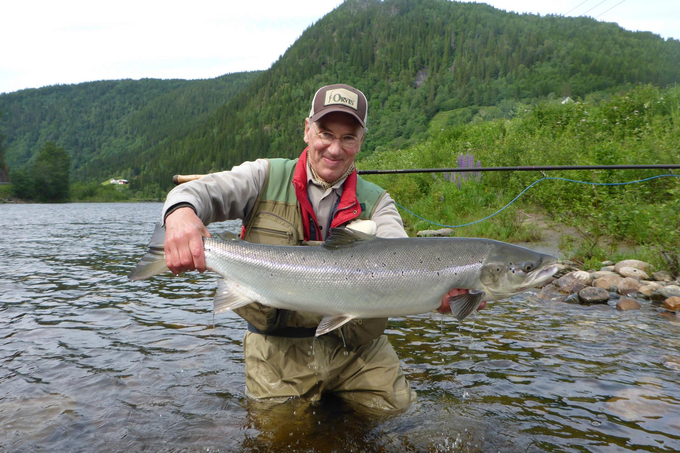 Manfred Raguse with his salmon of about 8,5kg from BS1.

Fabrice Bergues caught another fish on Beat D1, weighing about 5 to 6kg. The last day of the week was again a great day with several landed fish, for example Stefano Mantegazza’s nice salmon from BS1. 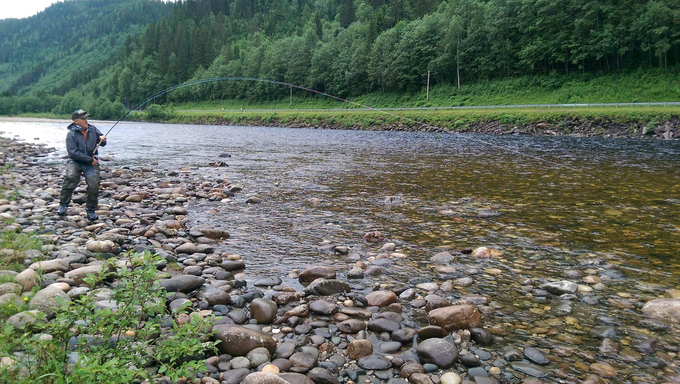 Stefano into his fish on Beat BS1. 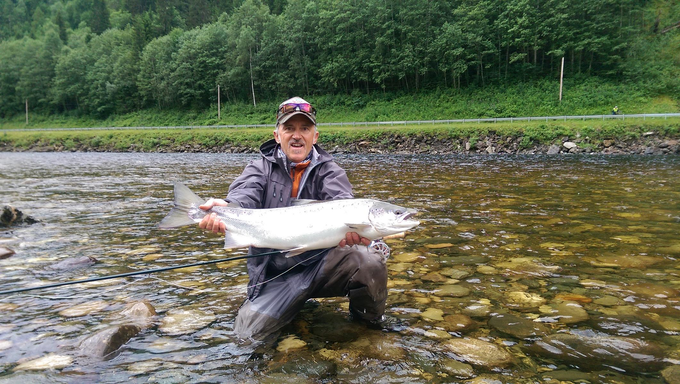 Stefano and his salmon from BS1 – approx. 8kg – a very nice male fish!

The water level is dropping now constantly and we might for the first time this season have “classic Gaula summer water level”, which should be very interesting and exiting for the fishing!